There’s a point where most people would just realise that the world is trying to tell them that they are cursed and that they should give up. 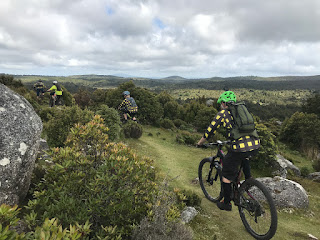 Me, I miss a lot of those messages, and so I just keep going.
This is, I must admit, is actually a deliberate thing.

You see, many years ago, when I was cycle touring across Europe with she who shan’t be named, we hit a bit of a low point after she crashed and hurt her leg and then between the differences in opinion over what to do next, injury, the rain, the midges, and a couple of months of being in each others pockets … well we both got a bit narky with each other.

So we argued a bit, and it all seemed terrible, but in the end … it made for a good story, and it is that philosophy that has embedded itself in my mind every since – everything that happens is either a lot of fun at the time … or it makes a good story afterwards … and as a blogger a good story is a good thing and a bad story is an even better story … so win win no matter what happens.
So, coming back to the present, this weekend I did something completely out of character – I asked if I could join the cyclops crew on one of their weekends away mountain biking at Derby. 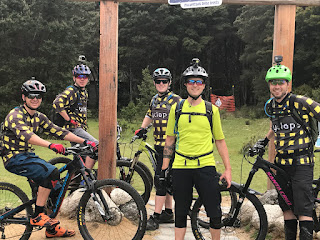 Yep, I actually asked to go cycling with other people.

This is not normal behaviour for two very obvious reasons:  (1) I don’t mix well with people and (2) even their slowest rider (if he had a broken leg, and was chained to a large rock) is twice as fast as me … which doesn’t set the groundwork for a successful week end away.

But still I asked, and they were cool with that, so I got picked up in Launceston and we headed off to Derby.
Which is where the Curse of the Blue Derby came back to hit me full force.
Day 1 (Friday) we arrived around lunch, got the camp site set up at Branxholm and then headed over to Derby for an afternoon of shuttling to the Black Stump trail head. 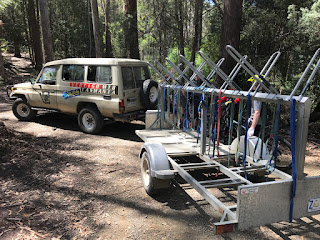 Things were looking great at this point as we had the offer from VertigoMTB of an ‘early’ start so they could run two group shuttles up to the black stump.

Because of our early start, we got to the top of the first run 45 minutes ahead of schedule, unloaded the bikes … the same bike that I had been riding around Derby not 15 minutes before with no problems, and my seat dropper post had dropped and nothing I could do would get it to lift back up again.

It was like riding a BMX with my knees up around my head. 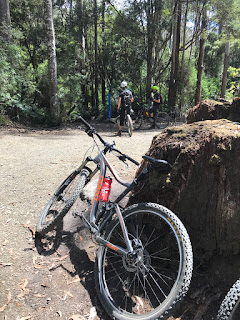 Unfortunately, before I had time to get up the courage to ask if anyone in my group had any ideas on what I might do,  they were already heading off down Upper Flickety Sticks … so I headed off after them (although I only got to see them if they stopped or broke down).
So that was my afternoon – we did four shuttles and rode Flickety Sticks twice, Return to Sender once and Shearpin and Twenty Three Stitches (both of which were a lot easier than I expected, albeit I did them at low speed) once.
It was fun, but even if I had had a functioning seat post I would have struggled to keep on the other guys tails.  As it was, they had dropped me within the first 100 metres and I was riding alone for the rest of the trail.
Sigh. 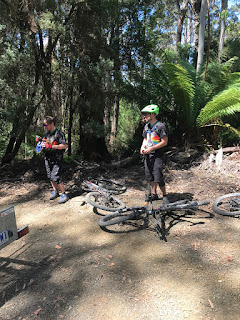 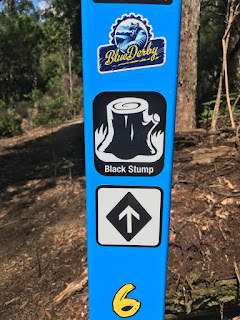 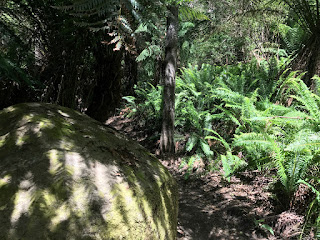 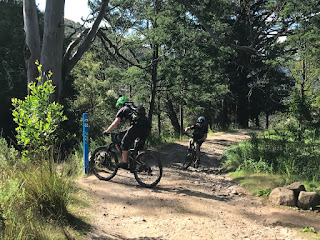 I also discovered that night that I had managed to break the strap on my brand new shimano shoes sometime during the day. 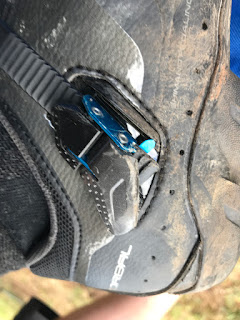 So they lasted for two days riding.

Do you see now why I’m starting to think that my riding at Blue Derby is cursed?

Day 2 (Saturday) was the big day – Blue Tier and Atlas and I was nervous.

I’d lifted my seat up to the maximum allowable height the night before (which was still about 2 inches lower than I’d like) and set off with trepidation for what the day had in store. 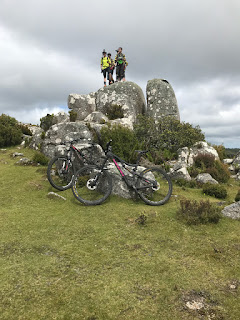 We set off … which is code for the Cyclops crew rode off into the distance while I rode along behind in my own time figuring that at some point (probably the Weldborough Pub) we might join back up again … but turns out that they did some video shooting and waited for me at a few spots so I wasn’t alone for the whole ride. 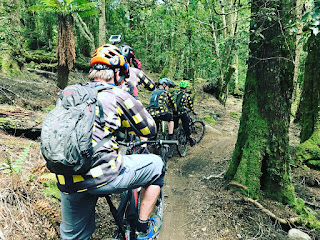 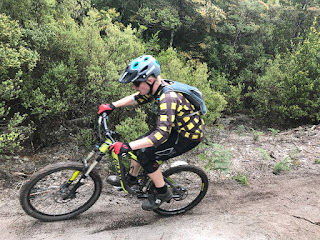 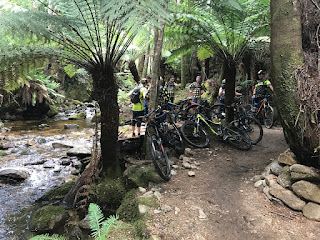 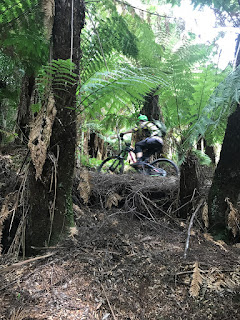 One thing I can say … riding the Blue Tier is a whole lot more fun than walking it.
Due to my slow travel time, we skipped the Little Chook loop and went straight to lunch at the Weldborough Pub.
I have to admit that as each of us forked out our $30 for a burger and a drink (well worth it) and I looked around at all the other packed tables with different groups of cyclists happily chatting away, I had to agree that maybe this whole mountain bike tourism thing has legs.
Then we started getting ready for the ride up to the top of Atlas.

A ride I was really not looking forward to.

While a few others in the group lubed up their chains, and checked their tyre pressure,  I cycled around the front of the pub and noticed both the VertigoMTB andd Bus2Berms shuttles parked there … and I asked the first guy (who happened to be the Bus2Berms guy) if they were heading to the top of Atlas.

They were, and for $10 I could chuck my bike on board.
Three point two seconds later, my bike was on board and I had a huge smile on my dial.

The others in my group decided to ride up, and I figured they’d catch me on the way down. 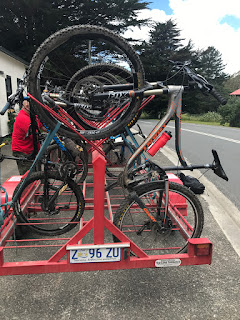 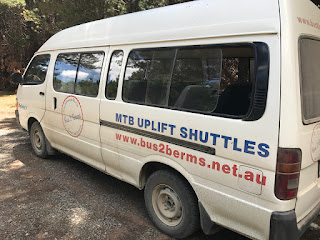 Despite the ominous warnings I’d heard about Atlas I actually found it much drier, faster and easier to ride than the last time I’d been through – even with a dodgy seat post. 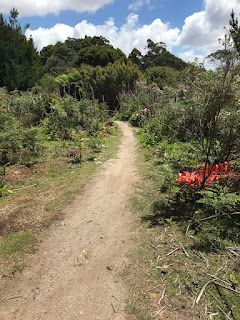 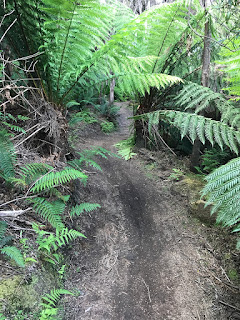 I took a couple of long breaks on the way down.  One at the lookout over Dam Busters and again at the main junction/creek where all the trails meet (Dam Busters descent by the way has really been ridden out badly) waiting for the Cyclops group to catch up, but they didn’t so I kept on going down Relics, across the river and then just after I joined the Krushka loop and crossed the road into the new section of trail I heard this almighty crack and my bike just dropped out under me as my butt dropped down onto the back wheel (ruining my knicks).
Fortunately I came to a quick stop and as I picked myself up and wondered what the heck had just happened, I saw the the curse had hit again … 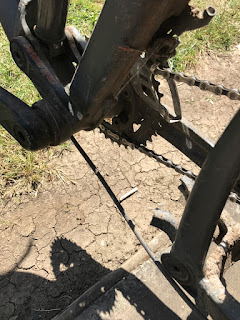 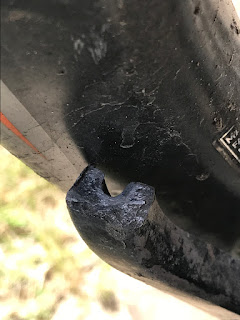 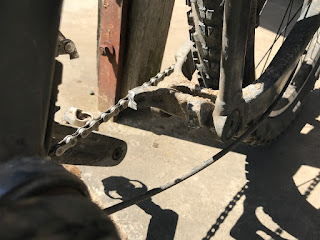 The pivots in the frame had just snapped.

Just as I picked myself up and began walking back to Derby – the cyclops crew came sweeping past.

At least I had a decent excuse for being caught :).

It was a longish walk back to Derby, but lots of nice cyclists stopped to have a laugh at my expense (all in good humour of course).

And that was my weekend done.

While most of the cyclops crew headed up for another few runs on Sunday, I managed to grab an early lift back down to Hobart with Michael who had to get down south for a Twenty20 game.

I even found out that Zeps at Campbell Town apparently made the best sausage rolls in the State and so was looking forward to trying one on our way through.

They of course only had one left, which I let Michael have.

Such is the curse of the Blue Tier.