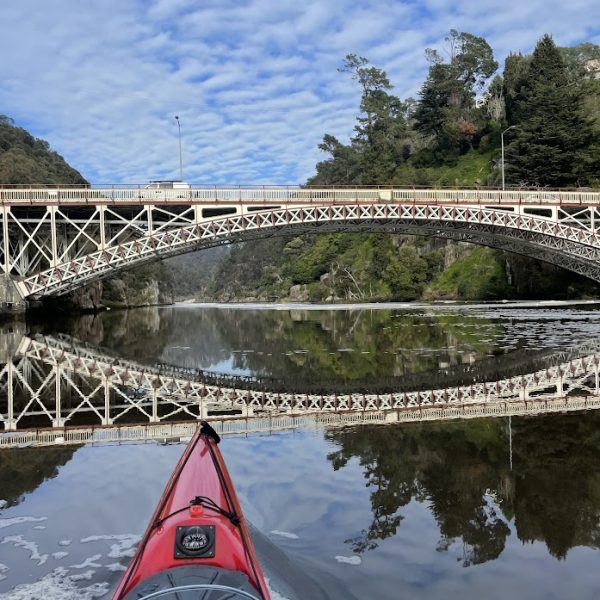 Having recently become involved in some work on the Tamar Estuary (and admittedly not knowing a lot about it) I found myself wading through reports and newspaper clippings and from there I got this desire to actually get up there and experience first hand all that I was reading about stinking, unnavigable mudflats. I wanted to visually (and nasally?) experience what people were saying.

And me being me, I figured what better way to do that than actually go up, jump on the water and see what I could see.

So very, very early one Saturday morning … that’s exactly what I did.

Now I had tried to do some research on paddling around here as I was a bit concerned about getting stuck in the middle of a mud flat on my first paddle, but truth be told I couldn’t find much information available on paddling on the Tamar online, and even a request for information on the Tasmanian Sea Canoeing Club’s bulletin board didn’t solicit much help, so other than knowing that there were rowing clubs and even a commercial kayak guiding company taking tours on the river so it must be possible to paddle there, I sort of arrived with a bit of a “let’s see how we go” attitude and enough foresight to put on the water an hour before high tide (thinking I would be off the water in a couple of hours).

That meant leaving Hobart in time to get up to Launceston and be on the water by 8am, but hey the drive up is always nice in the early hours, even with the incredible amount of roadwork and speed restrictions that were in place.

Anyway, I was on the water by 8am (launching from the boat ramp at Royal Park near the Park Street car park where I was happy to find you can park all day on weekends and public holidays for free).

With no idea where to really go or what to do, I headed off in a clockwise direction, just flitting around the shore and enjoying dodging all of the foam coming off a very strongly flowing South Esk River. I was soon getting some sense for the interactions between the land and water, and would probably be the only person who got excited about seeing a storm water outlet …

I then headed up the South Esk river as far as I was confident to go with all the turbulent water, which noting I hadn’t been in the Pace 17 for quite a long time and was feeling a bit tippy, wasn’t really that far …

After that little adventure, it was then a quick scoot back down the river and then a surprisingly rich and entertaining paddle slowly meandering my way down to the Tailrace Park and eventually to a spot just off the Newnham Campus of the University before turning around and heading back up the other side of the river past the old ferries and boats.

Between sunking and decrepit boats, tantallising shorelines, birdlife and other early morning boaters it really is an amazingly rich piece of coastline and I was surprised how much I was enjoying myself (and to be honest also wondering what all the fuss was about …)

Getting back to near where I started, I decided to go for a short paddle up the North Esk and ended up going under the first bridge, then the second bridge, then the third bridge and well then it just kept on going. I even discovered a bridge I didn’t know existed …

I eventually turned around about 7 or 8kms upstream as the tide was definitely turning and I had images in my mind of becoming stranded in the soft mud having to wait for the next high tide and this over-rode my desire to just explore around one more corner … and I’m glad I did as the water level on the bottom bridge had dropped 40 or 50 cms in just the short time I had spent paddling up the river, but definitely a place to come back and explore another day.

Overall I ended u paddling around 22kms and spent just over three hours on the water. My route should be below …

After my paddle, I headed up to Hollybank for a ride around the trails there, before returning to Riverbend Park around 3pm which was meant to be the time for the lowest tide.

The two things that jumped out at me were (a) if the low tide / mudflats were keeping people away then it wasn’t obvious, because the place was packed with families and walkers and cyclists out enjoying the day … heck even the ferry didn’t seem that perturbed by the low water … but maybe I need to come back again at a different time to really see what it is like at its worst.

That’s something I’ll be happy to do as this little explore has really whetted the appetite for more. Who knew this place would be such a hidden gem.