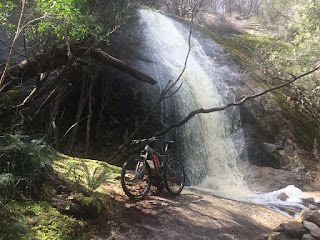 “Hey“, I thought to myself.

“I reckon if I leave early enough, I could get in a quick ride on the new trails they’ve opened up at Derby and still get to the Blue Tier opening ceremony in time “.

Then after a moment of contemplation …

Now there is a little bit of a serious side to this post – an insight if you will – into good old school provision of trail information at the trail head (and not on an iphone).

I rocked up to Derby with about an hour, maybe a bit more, to explore the new extension from the top of Long Shadows up to the new shuttle point at the “black stump” and then depending on time, the plan was for a quick ride/walk down the new black diamond Shearpin and 23 stitches trails before following the new “Return to Sender” trail back to Derby and a triumphant arrival at the Weldborough pub for the official opening.

It was tight, but possible, so off I went. 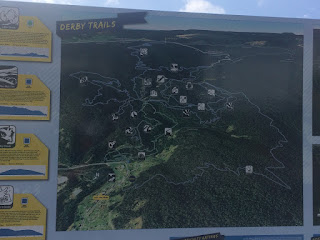 Kudos on that one.

Out on the trail, there was also new route number signage (albeit that it can be a bit hard to interpret, eg. does the sign below mean 1 goes left and the rest go right, or 2,4 and 6 go left and 1, 3, 5 and 7 goes right? 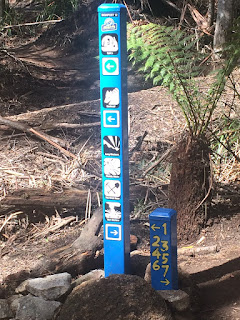 That’s where my being impressed stopped, because as I got to the top of long shadows ready to launch off onto the new upper section – I instead found the dreaded orange fence and a construction site sign.

Concerned, but not defeated I rode up the Dambusters trail towards 23 stitches, only to find more orange fencing and closed off trail … 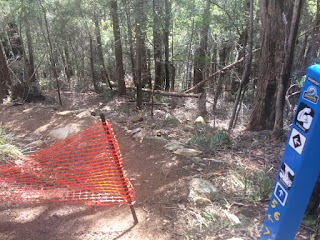 Despite knowing my likely fate, I continued on up to Black Stump (via the Cascade Dam Road) in the hope of at least being able to follow “Return to Sender” back to Derby, but instead I found all the trail heads fenced off … 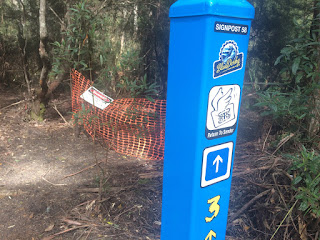 It was also about this time that I realised I had seriously miscalculated the time I had available to me to ride these trails (please try and act surprised), and so I returned to Derby (via open trails) feeling slightly cheated.

When I got back to Derby I did a double check of all the trail head signs, but sure enough there was no indication any of these trails were still closed.  I then jumped onto Blue Derby’s facebook page, and that was where I found (after clicking on the “Read more …” tab on one of their posts) that these trails weren’t opening today because of the rain.

So here’s my thoughts: on trails like the Meehan Ranges or Trevallyn/Kate Reed where 90%+ of riders are locals and they know the trails and what he weathers been like – you can get away with posting trail closures on the local facebook pages.  On trails where most riders would be coming into the region for a day or two, like Blue Derby, well,- I don’t think you can get away with putting trail closure posts at the end of a long post on facebook.

I would like to see Blue Derby put a traffic light system (or trail status indicator like snow resorts use) up on their website showing whether tracks are open or closed (or soon to be closed).  I’d like to see this replicated at the main trail head as well – or even if one of the businesses in town that are benefiting from the extra trade had signage out front (“come grab a latte and get the latest trail information inside …”

Anyway, I still had fun at Derby and got to see the trail in a much wetter condition than normal … 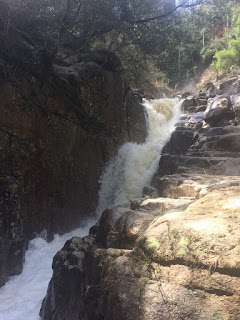 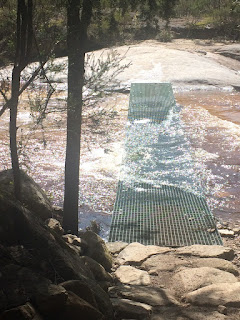 But it was time to hit the new Blue Tier trail … 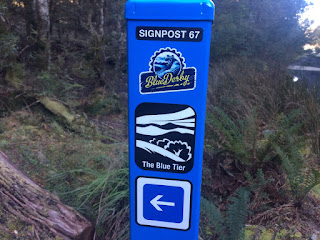 Now I hit some serious ‘firsts’ on the Blue Tier trail.

I’m guessing that I was the first person to miss the official opening (just for the record – although I got an official invite due to my recent involvement in the cycle tourism strategy, and probably could have justified headed up for work, I actually took the day off and went there as me, in my own time and at my own expense, so I don’t have to feel guilty about missing the opening).

I’m pretty certain I was also the first person to try and ride the ‘loop’ – that is starting the ride at Weldborough and riding up the old Blue Tier Descent trail before coming back down the new Blue Tier trail.

I can say this because (a) why wouldn’t you catch the shuttle and (b) there was no sign of any tyre tracks from the top of big chook all the way to where I crossed the new Blue Tier trail about 8 or 9 kms later.

I must say that the old Blue Tier trail has taken a bit of a beating by he elements since last time I rode here, especially up near the top, and it was quite the epic (especially as I had skipped lunch) to get up to the top. 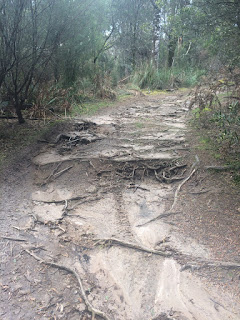 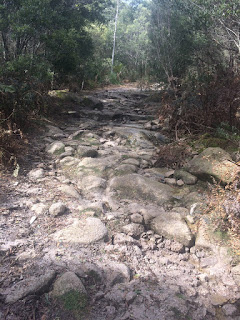 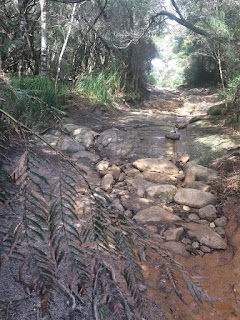 But after what an hour or more of slogging and pushing and wading of deep creeks, I finally crossed the new Blue Tier trail, and got myself ready for the descent. 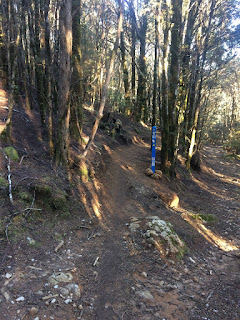 As I wanted to put the full trail route onto tassietrails.org I figured I may as well ride the rest of the old Blue Tier Descent route to the Poimena trailhead and then enjoy the ride back down from the start.

It felt like the tyres were slipping in the mud.

Unperturbed, I jumped off the bike and pushed to the top of the slight hill I was on, jumped back on when it flattened out and started pedaling again …

Except, that slight slipping feeling was still there, and it was feeling worse: like I was doing two pedal turns for every turn of the wheel.  What was more concerning was that the resistance you’d expect from pedaling uphill just wasn’t there either – it felt like the gears were slipping or something.

Fifty metres later I was turning the pedals and nothing was happening at all.

I jumped off the bike and had a good look and found to my horror that I could turn the pedals and the chain was moving, the rear cassette was turning – but it was like the cassette just wasn’t connected to the rear wheel which just sat there doing nothing.

I moved into a state of denial for a period at this point, turning the pedals expecting some miracle of reattachment to occur and the wheel to start turning again.

But it didn’t happen and the horrible realisation started to set in that after all my effort getting up here, I would probably have to push and ‘coast’ my bike all the way back down again.

There was going to be no screaming descent for me on the Blue Tier today. 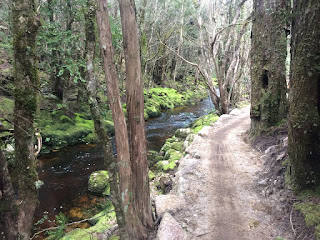 As Glen Jacobs was to say to me at the Welborough pub later that night “The thing people need to understand is it’s not the Blue Tier Descent, it’s just the Blue Tier track” and I can attest to that difference in spades.

There’s lots of downhill  and undulating parts to this trail, but I can say with a great deal of authority that there is also a lot of flat and uphill sections as well, and when you have to push your bike along these flats – well it becomes the blue tears trail (sorry – I had to put that in there somewhere). 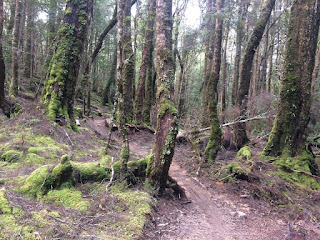 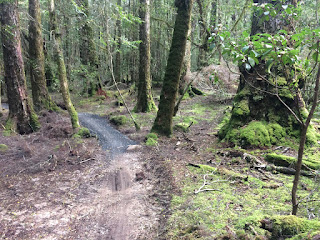 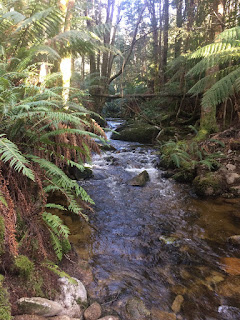 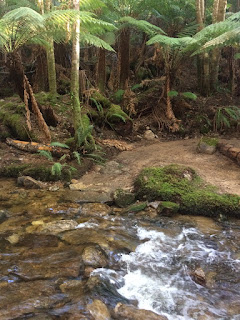 It took me nearly an hour to push and coast back down to the point where the Blue Tiers track connects onto the Big Chook track and it was a great relief to get onto a truly descending track and burn through the last few kilometres to my car.

But I’d done it – I’d (sort of) ridden the Blue Tier and (until someone tells me otherwise) I think I chalked up a few firsts – first person to do the full circuit after the official opening, the first person to catastrophically breakdown on the trail, the first rider to walk the entire length of the trail, and (right up until the moment I wrote this sentence) I was going to claim the slowest strava time, and one that will never be beaten for the blue tier trail … but then I just went and looked at strava and lo and behold … there is not one, but thirteen riders who have somehow managed to ride the trail slower than I walked it.

After spending a pleasant night catching up with a few people in the Weldborough Pub and camping there for the night (which, as a rather depressing aside, was practically empty), I headed up to Poimena the next morning in my car and walked the top part of the circuit that I hadn’t managed to ride.

It was a longer walk than I expected (6.4kms) and the trails were gorgeous in the early mornin sun … 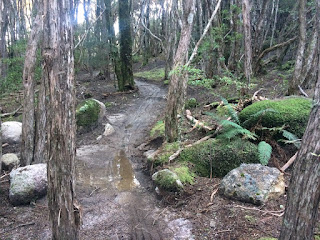 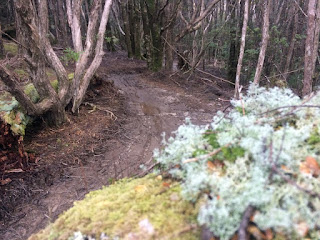 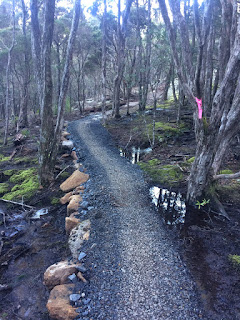 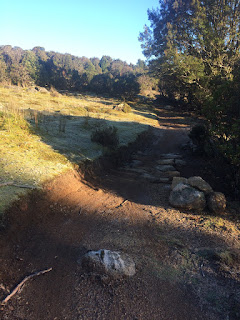 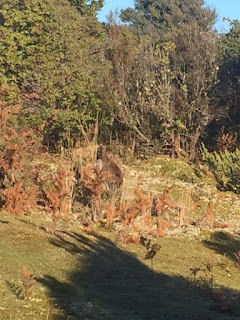 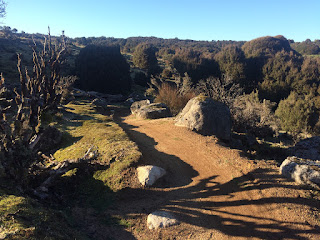 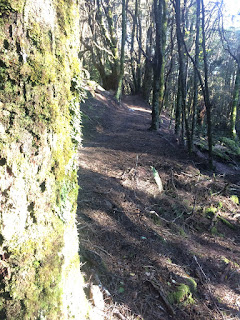 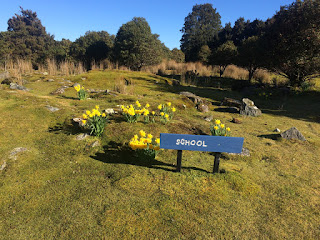 After my walk,  I headed down to St Helens for breakfast (where I had one of the most amazing breakfasts ever at a place I can’t remember the name of, but it is on the main street just down from East Lines and they do a big breakfast with boston beans – find it and try them!) and (more importantly) to see if I could get my rear wheel fixed at the bike shop.

You can imagine my devastation when I got to the door and found a sign up saying ‘Sorry – closed – gone riding at Blue Derby for the opening‘.

I was back in Hobart a few hours later, and that was my unsuccessful first attempt at the Blue Tiers.

Postscript to the postscript:

Oh – I am at least pleased to report that it turns out that I did in fact experience a mechanical catastrophe: the grooves inside my rear hub, which provide the forward propulsion, had apparently worn away – something that both bike shops I took the bike to (and the hub manufacturer) say is unheard of.

So at least I know it wasn’t some small little glitch I could easily have fixed out on the trail if I knew a bit more about bike maintenance, and added bonus – wearing out the inside of a rear hub is another first I can add to my list.

I am so easily pleased.