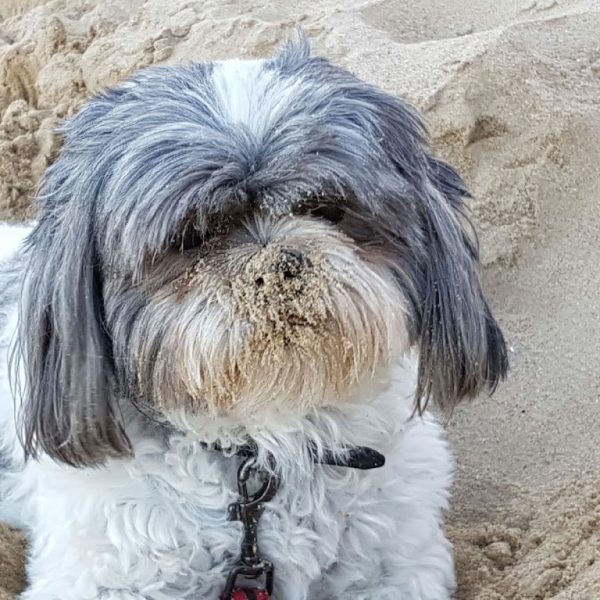 It started like any other day … dad got up early for our morning walk (he takes forever to get ready to go for a walk) and after what seemed like an eternity we finally walked out the door and headed down towards Roscommon Reserve behind Lauderdale.

Ella and I love our morning walks. 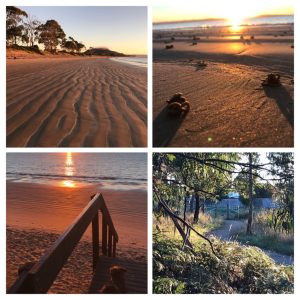 Anyway, this morning, we were about half way around the reserve and I was hard at work leaving my scent on a gate, because some inter-lopping dog that thought he might own this area had dared piddle here, when (very rudely) dad yanked my leash and pulled me behind him.

I was just about to tell him off for being so rude (I thought I might ‘accidentally’ piddle on his foot) when I saw this big black shape descend on me from out of the bush.

The next minute is a bit of a blur of fast, dark, black dogs, bites and pain.

I remember dad screaming and I remember trying to defend myself, but there were two of them and they were so big.  I remember being dragged off my feet and eventually driven into, and then under, the dam waters, but it all happened so fast I couldn’t tell you what exactly happened.

I also remember coming to the surface of the water and trying to swim away, but I was really hurt and I just couldn’t stay afloat, so I remember thinking this couldn’t be happening as I sank below the surface.

Then, just as I went under the water, I felt something grab me from behind and so I put out one last burst of effort as I turned around to defend myself … but then I saw it was dad who’d finally got back to me and pulled me out of the water.

I still wasn’t sure what had happened: I could see my collar and leash lying off to one side (How had I managed to pull out of my collar?) and I could see dad’s earphones about 5 metres away in another direction.

Fortunately, Ella still seemed to be OK, and I could finally see what it was that hit me … 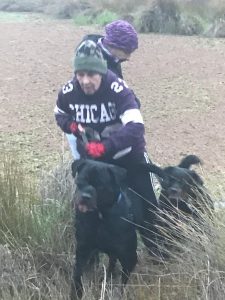 Dad later explained that they had been getting walked off their leash and must have seen me and taken off to attack before their owners could stop them.

I heard their owners say something about their dogs thinking I was a rabbit (ME – a rabbit?!?  how indignant!) and they quickly offered to pay the vet bills when dad said he was going to report them to the council, but then, somehow, like in a nightmare, one of their dogs pulled free again and came straight for me a second time  …

Now I have to admit that I may have thought some not very nice things about dad in my time (like, “can’t you see I’m starving – give me your roast pork!” and “can’t you sleep on the floor so I can stretch out on the bed a bit more?“, but today – he kind of came through.

Every time that dog came towards me and Ella he basically just stepped between us and started kicking and screaming at it, managing to hold it off until it’s owner came a second time and dragged it away.

I was sort of sinking into shock at this point, but I heard dad trying to get their name and address details, which they now wouldn’t give because I think at this point the owners knew they were in trouble, and then they both turned their backs and walked away.

I know dad tried to call mum several times, because he wanted to follow them, but he said that he had to get me home first and make sure I was OK, and by the time that they finally touched base, it was too late to go back and chase those rottweilers down.

Dad said that he was pretty sure his photos would be enough to find the owners, and I hope he’s right. 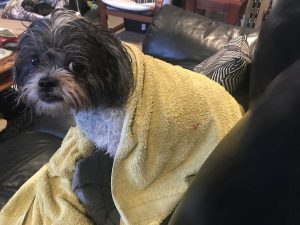 At first, it just looked like bites and scratches and some emotional damage, but mum and dad still took me to the vet (mum’s a bit of a Dr Google addicted hypochondriac), and it’s kind of lucky they did, because if they hadn’t been warned by the vet to look out for infections or injuries over the next few days, mum may have missed that lump that came up a few days later …

I’d been trying to tell them something was wrong – I didn’t eat my dinner (I mean hello!!!!) and I tried to tell dad I didn’t want to go for a walk in the morning (I mean double hello!!), but it wasn’t until mum felt the lump that she took me to the vets, and when she did, I was taken straight into surgery.

Just like the vet had warned, I’d gotten an infection from the fight, and it had formed into an abscess under the skin.

When I woke up from the surgery, everyone seemed really worried and I was getting carried everywhere.  I even had a large pipe jutting out of my side with blood and pus oozing out of it (yum!).

When I got home and tried to go outside for a … well you know what … I realised I couldn’t get through the door and that things were even more serious than I thought. 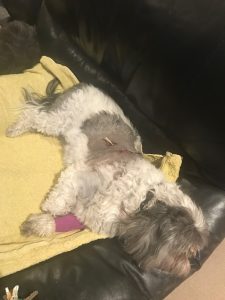 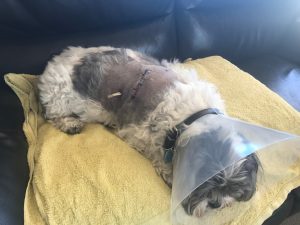 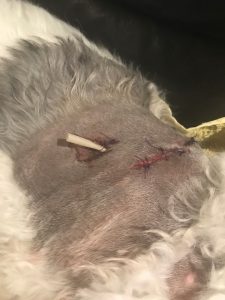 I heard dad say that it had already cost over $1,100 in vet bills (do you know how many treats that would buy?  no – neither do I, but I bet it’s a lot), plus both he and mum are having to take time off work, or juggle working from home, for another week so they can look after me, so I guess I’m lucky that I’ve got parents that will look after me no matter what.

But it really was the worst day of my life, and I just wish someone out there might know who these dogs (and their owners) are, or where they live, and could let us know anonymously in the comments or by emailing john at tassierambler@gmail.com.

You see, I don’t understand how things work in the human world, but I know dad immediately reported the incident to the council dog controllers, but they don’t have the authority to go knocking on doors looking for the owners, so unless someone comes forward and identifies them, that means those dogs might attack some other dog like me in the future, and no one will ever know they’ve done it in the past, plus the owners will never be held responsible for all my medical bills …

So if you know them, please let dad know …  he said he’s seen them walking around before so they must live somewhere around the Lauderdale area … 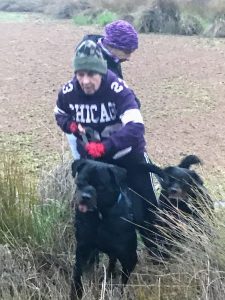 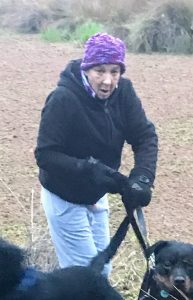 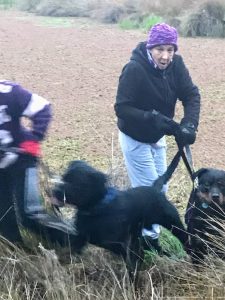 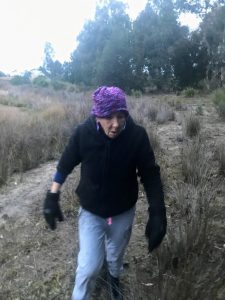 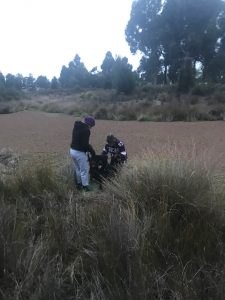 In the meantime, I might go back to resting as I don’t feel so well.