We nailed the Bruny Island Ultra last year (you’ll note how I say ‘we’ despite the fact that Kim ran the full 64kms and my role was just support crew).

Heck, we even lined up eleven quolls as good luck charms.

We basically had a winning plan already written out for this year and all we had to do was follow it. 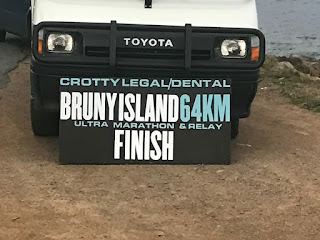 Which, of course, we completely failed to do. 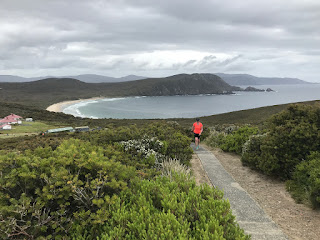 Things went off track pretty quickly:  The lovely AirBnB we stayed at last year wasn’t available, and in fact the only place that was available on the Island was right down at Alonnah.  Not ideal – and also quite expensive ($240 a night).

But it looked great online, and so we both took Friday off figuring we could go down and get our monies worth lapping up a bit of luxury before the race.

I can now safely say I know how George Turner from fictional TV Series “800 Words” felt like when he first saw the property he had bought at Weld and realised it was not quite what he’d seen in the photos… our ‘luxury accommodation’ (which I’d been boasting to coworkers about all week) was in fact an old shack, complete with that old shack smell, cheap, uncomfortable furniture (the fancy pictures and luxury cushions from the online photos were long gone),  a rusted outdoor setting and a television that didn’t even work … 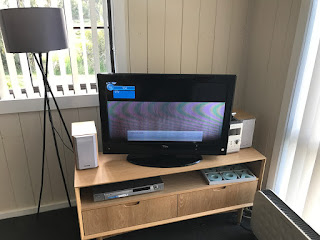 We were not impressed, and instead of lounging around in luxury we found ourselves shifting around on the uncomfortable couches wishing that it was time for dinner so we could get out of there.

It was not an auspicious start to the weekend.

But, we did manage to maintain our ritual of beer and dinner at the Bruny Hotel which was as good as it was last year. 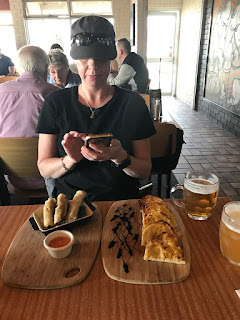 Maybe going a little too far in our carb loading strategy … 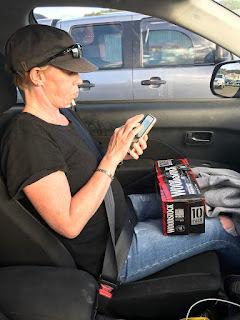 (PS. If you’re wondering – no Kim never does get off her phone  – I think she see’s herself as a Kardashian).

We didn’t see any quolls this year on the way to the start either: but we did see a poor little pademelon get run over by the car in front of us.

What was I saying about inauspicious starts?  Unsmiley face.

Then it was start time …

Now last year, I was at every 2km stop for the first 6kms checking Kim was OK, before waiting at the CWA Hall for a double bacon and egg muffin for her so that I could deliver it to her fresh on her run.

This year … maybe I brought my bike, and maybe I got distracted …

Yep, I decided to go for a short spin around the North Island (returning to Dennes Point via Killorna) on the bike, before catching up to Kim and continuing on as her support crew …

Because that strategy has never gone wrong for me before. 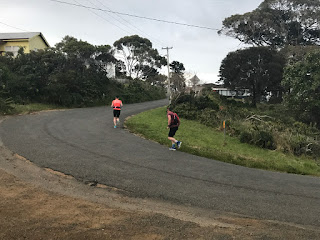 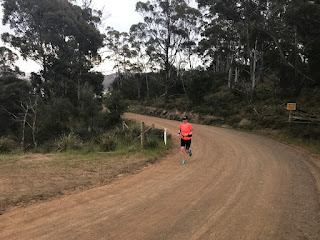 But the truth was that she was running up the hill almost as fast as I was riding up, and so I was very grateful to get to the top and tell her that I had better head off now so I can get back to the car and support her (while really just using the downhill section to be able to build up a bit of a lead).

The Northern Loop turned out to be superb riding, especially in the early morning light … 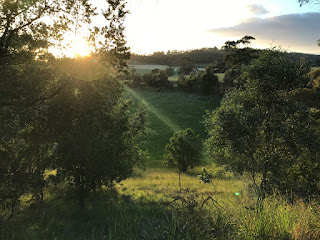 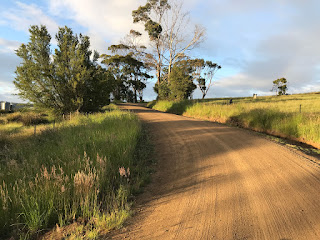 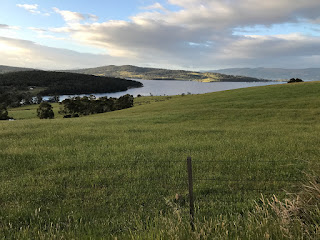 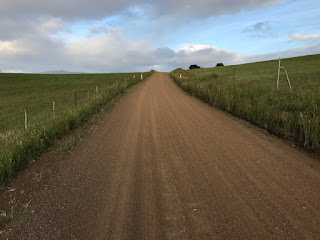 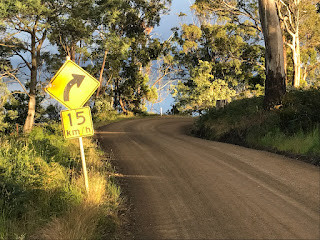 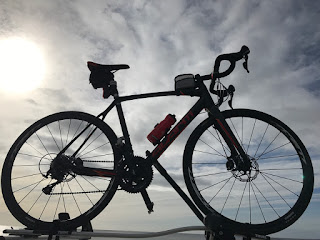 And this time (unlike previous attempts at incorporating a short bike ride into my support crew activities) I was still able to get back to the car, pick up Kim’s egg and bacon muffin and still be back with her by kilometre 18.

The rest of the race went like clockwork (from a support crew perspective – apparently the runner was in a bit of pain), which tells me that maybe I’m getting this whole thing sorted out and there is room for a bit more risk taking … like wandering down to the beach to take penguin footprint photos (nope – did that this year). 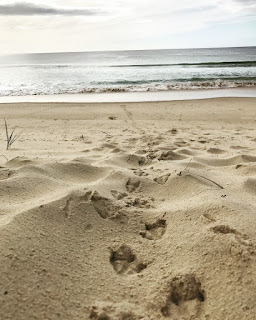 Then there were a few more kilometres (around 32 from memory, but who’s counting …) 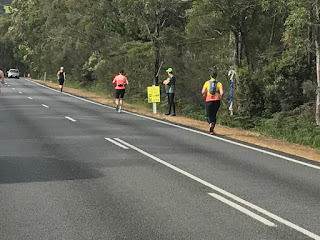 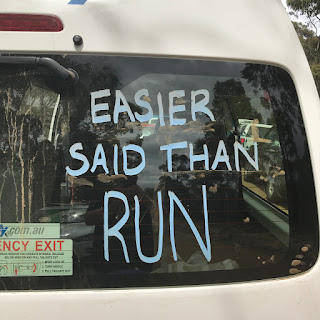 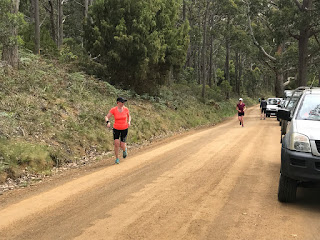 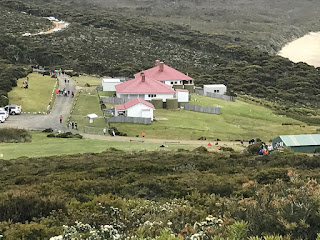 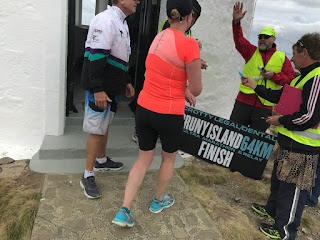 And we were done.

What a team – even despite the changes to our perfect strategy from 2015, we still nailed it going only 3 minutes slower than last year.

Kim is quick to point out that, according to her GPS watch, she was not moving for 18 minutes of the race, and so if her support crew had been more on the ball – it would have been a P.B. (actually what was a bit frustrating is that she wasted 5 minutes getting into the female toilets at Allonah because other people (not solo racers) were using it).

Bit of a bummer (no pun intended) missing out on a P.B. beause of a loo stop.

We’ll make sure there are none of those next year!