Today was Kim’s day … her first Half Marathon … a big tick item on her bucket list.

I (being me) of course hadn’t considered the importance of this to her, instead making plans to head off on a bike ride for the day, but the wonderful thing about Kim is that she isn’t shy to let me know that I’m being an unsupportive and insensitive b*sT#rd, and after this was pointed out to me in her usual delicate way, I realised I needed to put my plans on the back burner and make new plans to be there as her cheer squad. 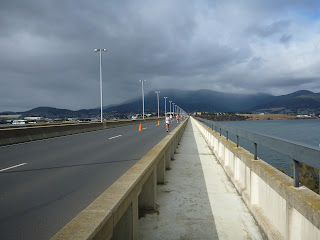 And thinking about it, I was very proud of her … she intended to do the half marathon with practically no training.  In fact she had crammed her entire training regime into two runs on the two weekends before the event and then gone into a taper because her knees hurt so much she could barely walk … then off she went.

That’s my girl.  She’s learnt everything I could ever teach her about getting ready for events.

Unfortunately, but predictably, my stint as chief cheer leader didn’t quite go to plan.

Now while most people would probably just got to the event and cheer (it’s not really that hard a job), I decided I could do much better than this and that I could also cram in a quick bike ride around the river between the start and finish, so Kim took off in her car to get to the start in time for the gun and I followed 20 minutes later after loading up the bike and getting into my cycling gear.

As I pulled up into the car park at 7am on the dot it looked like I had timed things to perfection.  I could see the lead runners setting off up at Cadbury’s  (I was a couple of kms from the start) and figured I had just enough time to unload the bike, and head down to the cycleway to see Kim run past … except I had forgotten how long it takes me to get ready, and by the time I got there, I watched the runners goin past and thought “Nope, these guys are too slow … I’ve already missed her.”

Not overly worried by this, I figured I’d just cycle down the track a bit further and catch up with her and commence my brilliant cheering regime, except as I did this, I (and everyone within 100 metres of me) couldn’t help but notice that my rear disc brake was rubbing against my pad creating a horrid squealing noise every time the wheel turned (Am I the only one that has this recurrent problem?)

Still I was’t worried as I had become an expert at fixing this problem.  I jumped off the bike and went to grab my multi-tool … only to realise it was sitting back in my car.  Doh.

There followed that horrible 30 seconds of indecision …. do I carry on squeaking away or go back and fix the problem?  I went back, figuring I would grab my multi tool, fix my bike and  return to my original plan of cycling out to Granton, across the bridge and back down the other side of the river to the top of the Bowen Bridge where the half marathoners would be turning around.

I figured I could probably still do that in time to cheer Kim on at that point, so off I went. 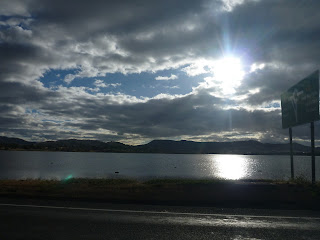 It was a nice warm up ride out to Granton and over the bridge, and it was good to be under a bit of time pressure as it meant that I pushed my pace a bit ensuring that I also got a bit of a workout.

I turned onto the multi-use pathway over on the other side of the river, and the bird-life was again plentiful as I followed the same route that Kim and I had cycled back in April to Gagebrook. 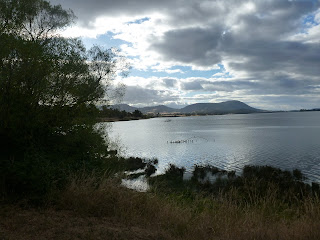 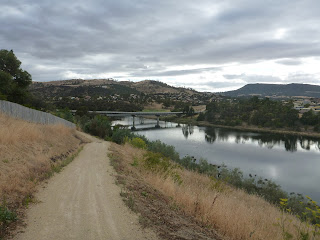 However, we really hadn’t enjoyed the section back along the highway to the bridge, so glancing down at my Garmin and seeing that I had only been going for a short while and therefore still had plenty of time to get back to the finish before Kim got there, I decided to bypass the highway and follow Old Beach Road around to Old Beach from where I was able to pretty well jump straight onto Jetty Road which I followed to the jetty (surprise, surprise). 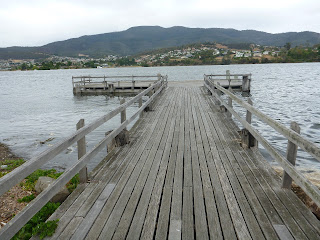 From the Jetty there was another section of multi use trail which I’d not ridden before.  This section again follows the river and was easily the nicest section of the route …  although I couldn’t tell you why – I just enjoyed it even though none of this route is particularly scenic. 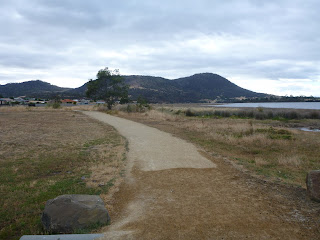 The only slight downside to this trail is that although it looks like it is taking you back out to the highway, it actually ends a couple of hundred metres short at a little outlook on the river.  However there was an obvious foot trail which led off the main track continuing towards the highway and although a lot narrower than the rest of the trail, and a bit overgrown, I was still able to easily push and ride my bike out to the highway without having to backtrack.

However, figuring I still had oodles of time to get back to the finish before Kim (though having given up on the idea of being able to meet her at the half way point), I headed back into Old Beach and tried to figure out alternative ways of getting off the track and onto the highway without this slightly dodgy section … 10 minutes later, having ridden what felt like every back street in the area, I suddenly realised that the internal maths I had been using in my head to figure out how long I’d need to beat Kim back to the finish line was completely wrong because I had been basing it on the assumption that I had set off at 7am … whereas due to my mechanical issues it had actually been about 20 minutes later than this … which meant that she was about 20 minutes from the finish line already

I abandoned my explorations and high tailed it towards Bowen Bridge, but of course I had also completely underestimated the distances involved (I’d figured it would be a 25-30km loop – but it ended up being around 40km) the end result being that I pulled into the finish well after Kim had finished.

Still, Kim had done an amazing first half marathon in 2 hours and 4 minutes (actually a bit less as  the course was apparently about 500 metres too long).

I on the other hand had had an enjoyable morning, but think next time I take on Head of the Cheer Squad duties I might just concentrate on actually being there a little more.