It was a really windy in Lauderdale this morning, and so as I was driving into work, I decided I’d drive over the bridge to Cornelian Bay and just ride in from there (avoid getting buffeted by a side wind on the bridge).

But then just as I was about to drive onto the bridge, I suddenly changed my mind and veered off towards Lindisfarne and parked at my usual spot.

It was a weird little impulse, but as I pulled up to get out my bike it seemed like the right one as there was only a gentle breeze this far up the river.

I was just about to ffire up strava and cycle off from my car, when a lady who had been sitting in a car on the other side of the car park opened her door and asked if I had some jumper leads with me.

I didn’t, and I told her so.  She swore mightily to my answer and slammed her door shut again.

Thinking to myself “well, who’d want to help someone with that attitude anyway“, I clipped in and was about to cycle off when I remembered this … 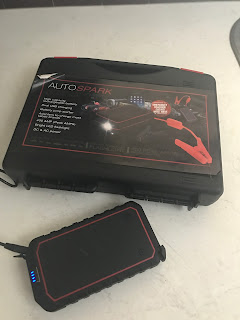 A few months after getting a flat battery whilst charging my iphone from the car up at Arthur River, I had been buying some stuff from Torpedo7 when I saw this AutoSpark car start kit on sale for $80 and thought to myself “that would be useful if I ever get another flat battery”  and clicked on “Add to Cart”.

It arrived, I checked it was charged and promptly put it under the drivers seat and proceeded to forget all about it.

And having remembered it, I was still so tempted to just cycle off and get on with my day.

I had to actually stop myself mentally, tell myself to do the right thing, get back off the bike, unlock the car, search for the kit (it was actually under the passengers seat) and then I went over to the lady (still sitting in her car) and explained that I had just remembered that I had this kit, I had no idea how it worked, but that we may as well see if we could get her car started.

She was thrilled as she got out of the car, and proceeded to explain how she’d been there for what she thought was more than an hour, how she was eight months pregnant (I could see that she was), how she’d gone for a drive down her to go for a short walk (not sure if that is kosher, but it’s her life) and how she had left her lights on resulting in her battery going flat.

It was a good moment to know that I’d made the decision to stop and interrupt my life to help someone who obviously I’d have wanted to help if I’d known her story.

I did finally get on my bike, and I did cycle into work.

I just had a slightly bigger smile on my face than usual.