I love volunteering for the annual bicycle count … well evidence suggests I love it enough to volunteer at least every second year and I know this because you can read my previous posts on the 2012 and 2014 count, but not the 2013 and 2015 counts (I think I was away for these).

To be honest, after yesterday’s marathon effort producing my University essay I wasn’t 100% sure I’d make today’s count either.

Anyway, I live on the Eastern Shore now, so I decided to count a different site this year … specifically I thought I’d volunteer to count the eastern entry onto the bridge from Riawena Road (ie. the Clarence Pool side). 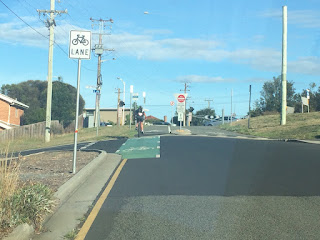 The thing about the bike count is that it’s a bit like being an astronaut – it’s pretty boring and mundane most of the time as you sit around waiting.

Did you notice there how I managed to compare myself to an astronaut.

Around 80 people rode through my junction during the morning, with about 80% of cyclists being male (I know this because this year we had to try and separate out male and female riders).

There were only a smattering of electric bikes, and as expected most of the cyclists were coming down Riawena Road (from Rosny College direction) and heading across the bridge.  There were, however, three park and ride cyclists (ie. people who drove up and parked near the bridge and then cycled over to the CBD) so I’m interested to see that I’m not the only person who does that.

The highlight (lowlight?) of my morning was one that I saw in my rear mirror and really wished I hadn’t … 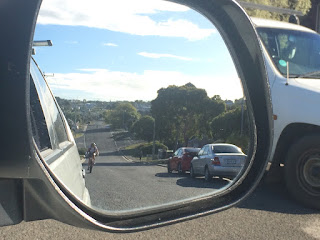 I was just having a quiet moment when I heard a big crash and glancing into my rear-view mirror I saw what looked like building materials rolling along the road next to a ute that was going around the corner behind me.

My first thought as I saw the guy leap out of his car and run towards all the ‘stuff’ on the road was “poor guy, he’s lost a whole lot of the gear strapped to his roof going around that corner“.  Then I remember thinking two thoughts almost instantaneously.

Thought 1: “hang on, gear on the roof of a vehicle is very unlikely to fall on the inside of a turning ute” (if my physics professor from year 11 is there – you’ll be pleased to know I still remember your lectures on centrifugal vs centripetal force); and

That’s when I realised that the ute hadn’t lost its load, it had struck a cyclist …

It may well be that my count for the next 30 minutes was somewhat less than accurate, as I (like many others who heard it) raced down to the junction to see if I could provide assistance.

There’s not many good things you can say about such an incident, and I really hope the guy that is hit is OK (he managed to get up and walk while I was still there), but I was pleased to see that the driver stopped and took responsibility for the accident and that the first thing he did after his passenger stabilised the cyclists neck was call the ambulance and that virtually every cyclist, motorist and resident in the area took the time to stop and see if they could help (one even offering to go and get her husband who was a paramedic).

I also learnt some really important lessons myself.

So it wasn’t the morning I expected it to be, but it was an eye opening reminder about how vulnerable we are on the roads.
ride safe, be visible.