Almost two decades ago, I started a Graduate Diploma in Environmental Studies (Hons) at the University of Tasmania, and then six months in, I got a job at Forestry Tasmania.  So I switched to part time, and promised myself I could do both an honours degree and a full time job.

I found a thousand reasons to put off starting my honours thesis (most to do with the fact that work was actually real and meaningful) until finally, two weeks before the final deadline, I bit the bullet, took two weeks off work and just researched, wrote, ate and slept … and somehow managed to submit my honours research project (bound and in triplicate) with hours to spare.

It was an academic disaster from my perspective – I just scraped through with a second class honours and I promised I’d never do something like that again.

In fact, when I was sponsored to go back to Uni a decade later to do another Graduate Diploma (in Information Technology (Project Management)) I kept that promise.  I turned my life into a six day working week, and every Saturday I would go into work and study.

I did this for the better part of two years and aced that course, getting seven Higher Distinction’s and  one Distinction (which I was very disappointed with).

There’s a story there about sweating the small stuff.

But all that long intro is just to bring us to the present.

I volunteered for another Leadership and Management Course last year, which was sold to me as a three week executive course aimed at the future leaders in the State Service.  What no one mentioned (until induction day) was that this three weeks was actually just meant to be the start of another Graduate Diploma.

I loved the three week course, and then I tried, I really tried, to get into the University part of the course, but I just couldn’t.  I managed to submit my first 2000 word assignment by the deadline, but then the idea of sitting down and writing another 6,000 word thesis … double groan.

So, like my first Graduate Diploma, I put it off, and put it off, until finally …. it was due.  And it wasn’t due in a fortnight, or next week … it was due the next day.

In fact, the only reason it wasn’t overdue was because it was a leap year and so I had this one last extra day – the 29th of February – to submit the assignment.

I thought about this a lot as I drove back from Cradle Mountain after doing Nic’s Mini Cradle Challenge and although I had previously resigned myself to not submitting the assignment and just failing, I realised that I should at least try and submit something … I owed it to my sponsor to at least do that.

Now I’d be lying if I said I started with a completely blank slate, because the topic I’d chosen was one I really had been researching for years … the development of Mountain Biking in Tasmania.

My assignment had to take a management and leadership angle on things, so I looked at the role that the Tasmanian Government had played in implementing the Tasmanian Mountain Biking Plan’s actions and therefore mountain biking itself over the last six years (The plan was released back in 2009). 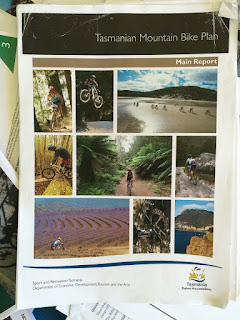 I should also mention that I was constrained in my Uni assignment by not having applied for a human ethics committee approval (so I couldn’t talk or interview anyone for the project) and could only rely on published information (and my own original research) in looking at progress, but if you think about it,  I’ve accumulated a lot of published information on mountain biking through the last five years:

Yep, I had a wealth of information at my fingertips … almost too much in fact … 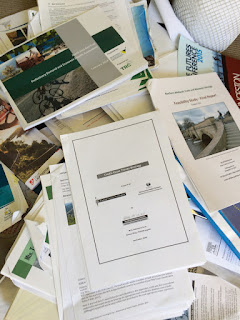 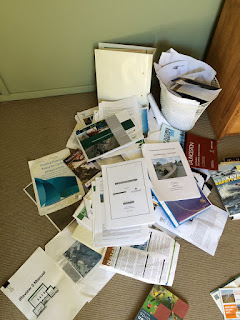 The assignment had also got me thinking about new datasets which I hadn’t previously thought to look at like, like event participation (which was one of the goals in the plan).  I realised that events publish finishing lists so it’s possible to go through websites and compile this, which I did … 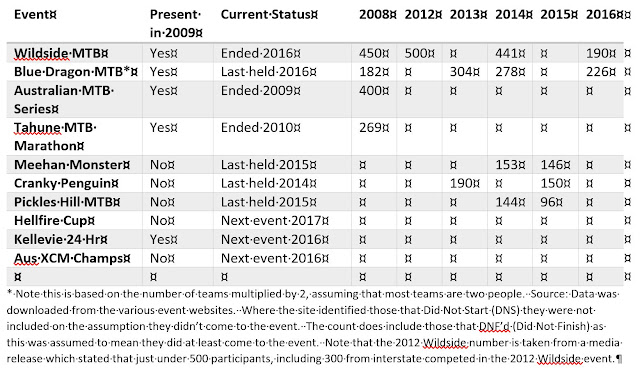 … and in doing so discovered that individual event participation actually seems to be in long term decline, although it’s hard to know whether this is because of participants spreading their spend across more events, increasing costs or because people are now able to ride many trails outside of events (whereas back in 2009 many of the trails were only rideable through events).

Having hit a brick wall on getting trail count data, I realised I could create an index of relative trail popularity from strava … it just took a bit of time. 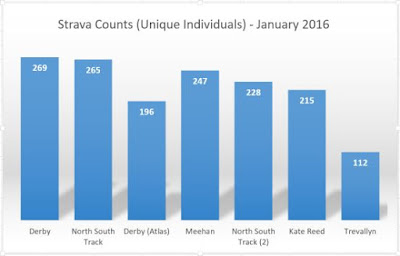 Yep, I had a wealth of data built up from years of research into mountain biking, and so by the end of the day I was kicking myself for not giving myself more time to have done this assignment properly.

But – kudos to me – at 11pm that night, I downed pen (well – keyboard) and pressed submit.

My home office was a mess, my brain was fried and the puppy dogs were looking at me worriedly (or maybe they were just hungry having maybe not have been fed yet), but I’d done it – I’d written a 6,000 word essay on the development of mountain biking since 2009 (with a 5000 word attachment looking at progress against each of the fifty-five actions in the plan, albeit that 2,500 of those words were the actual actions themselves).

If, and that’s a big if, I get a pass on this assignment, then that will be an impressive days work … but next time, if I’m going to do something like that, I’m going to do it right.

PS. If you have any interest in seeing the report, you can download it here.  I cringed a bit when I read it, but it has some useful information in it which I’d now like to go back and re-explore with more time and without the constraints of academic research.

I’ll let you know when I know my results …