I thought it was the perfect way to end my challenge, absolutely perfect …

I’d declared my intention to withdraw from the Winter Commute Challenge two weeks before the actual end of the winter commute challenge and one week before my final ride, and then in the final week I’d ridden two days, skipped two days and found myself heading into the very last ride day with the score on 28 days to me, and 19 days to winter.

All I had to do was ride one last day, and the score would be 29 days to me, 19 to winter, which meant that even if I counted the last two weeks as ‘wins’ for winter, the score would still have been a perfect 29 all.

The problem was a few days earlier, I’d seen this …

… and I thought to myself in a very Homer Simson like way … Mmmmm … waffles.

Then as I considered this further, I realised that going for a waffle ride would be a very rambler thing to do.  That is to work hard for eleven weeks to actually put myself into a position where I could actually, finally and eventually win something after forty plus years of just trying not to come last … and then give it all up for some waffles. 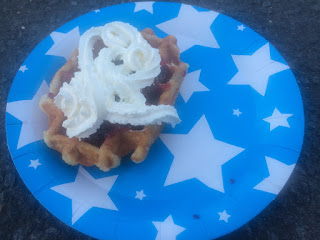 And I felt really good about this decision as I cycled over the bridge after the ride and headed into work.

And that is when it hit me.

I hadn’t just made a choice to ‘throw’ the winter commute challenge, I’d been carefully manipulated and had my victory stolen from me by this guy … 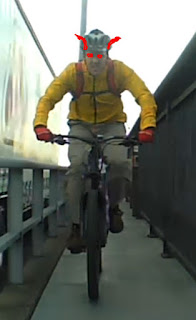 Diablo Dave (and yes, that is my best attempt at giving him creepy red eyes and devil horns).

He’d been subtle, oh so subtle …

So then he ‘joined’ my challenge and pretended to support it by encouraging me to ride new routes over Rosny Hill and Mornington Hill.

Only now do I realise, he was actually just trying to make my rides harder to make me give up.

And then, oh so close to the end, he pulls out a left field offer that he knew I couldn’t refuse …