So, I’m a bit behind in my blogs (OK, three months behind), and unlike a normal person who might just move to the here and now, I have a need to keep things in chronological order, so here’s some catch ups.

I actually trained for this event … I mean for 12 weeks in Winter I rode my way to and from work consistently clocking up over 100kms a week in my winter commute challenge with the vague goal of actually not embarrassing myself in this event.

Come race day, Stephan then did his bit hoicking his way around the paddle leg, in an outrigger canoe no less, managing to hold onto the tail end of the main pack and putting us in a respectable position about 2/3rds the way down the pack. 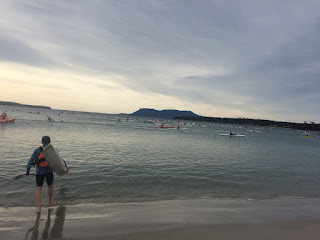 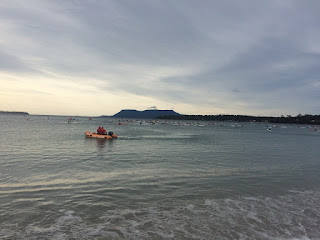 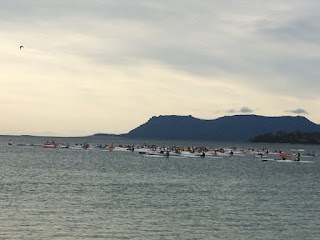 I then held my own on the first ‘out’ section of two out and back legs on the road bike, and was feeling OK as I know I tend to get a bit stronger after the first 15 minutes on the bike.

I turned around and was making my way quickly, but carefully, down the steep hill with the root ruts and steep corner at the bottom of it, when this lady came past me … and I swore I saw something come off her bike, and it looked like something important – like a bolt.

Thinking to myself “that was probably bad, I better let her know …“, I threw caution to the wind, started pedaling and began to reel her back in.  Then, just as I was about to call out to let her know I think I saw something metallic and bolt-like jettison itself off her bike … I hit that root rut that I knew from my pre-race ride was going to be some cyclists undoing in this race.

I just didn’t know it was going to be mine.

I hit it hard, and as I went around the sharp corner at the bottom of the hill, I felt my front tire slip out from under me like a half deflated balloon.

I managed to catch the front tyre slip, but the truth was out there:  I’d pinch flatted about 10km into the 32km road bike leg.

I was still 6kms from the start point, and more ominously I didn’t have a spare tube with me, because the two new tubes I’d bought from Ride Bellerive especially for this race had both exploded when I tried to inflate them to 100PSI the day before.

I managed to make it another 800 metres until the tire went completely flat at which point I pulled across in front of a group of SES volunteers, pulled out my minuscule little emergency road pump, and proceeded to do the fastest 150 pumps I’d ever done in my life, just managing to get my tire back up to 70 PSI which I considered to be ride-able while I figured out what to do from here.

What followed was a saga involving short snatches of sprint riding (while I had pressure in my front tire), longer periods of slower riding with all my weight over the back wheel as the tire got down into the sub 40 PSI zone, and then a desperate pit stop and pumping when the tire got too dangerous to ride on.

I think I had to inflate my tire five more times over the remaining 22kms of the road leg, and ended up running the bike in the last hundred metres …

It wasn’t exactly a day to cover myself in glory.

All that extra effort had taken it out of my legs for the mountain bike ride, and so it was a slow ride to the top of the hill, followed by a spate of chain drops (three times I lost my chain and had to stop to put it back on) and an unexpected dog leg climb which I must have missed on the training day.

Stephan then brought us home pretty well considering he hadn’t run for about a year, but there’s no sugar coating it … all up, it was really a disaster of a day race wise and my times showed it. 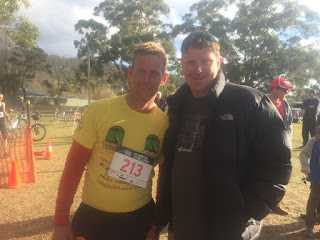 However, I did get to the end and I can say at least I tried, and who knows where it could take me next year.