So after our Raw Challenge, Kim headed back home to spend the rest of the weekend grooming dogs, catching up on washing, cleaning her windows and scrubbing floors (I think the unspoken implication of this being that she found this more attractive than what I had planned).

I on the other hand headed north towards Buckland and more importantly onwards to Mt Murray.

The Mt Murray Meander Rogaine is coming up in just one week, and after my disastrous first session of course vetting a few weeks ago, I was feeling very worried about only having a day and a half left to check all of the controls on the ‘other’ 92% of the map.

Now do you understand why Kim decided to go home and scrub her floors rather than join me?

Actually, after catching up with Rod at Spring Beach and smoothing out a few administrative issues such as why we had a map with two more controls on it than we had control descriptions for, and why our maths showed we’d be vetting a different number of controls than both of those figures (all minor issues to do with map printing which is why we vet) I found out that I only had to set and check eleven more controls.

A doddle, even I could do that with a day and a bit up my sleeve (actually two and a bit days as I’d cancelled a planned kayak trip to Cape Bouganville on Sunday due to predicted wind conditions), and of course me being me, I silently figured I might even be able to put them all out today, potentially opening up two extra days to go play doing something else. 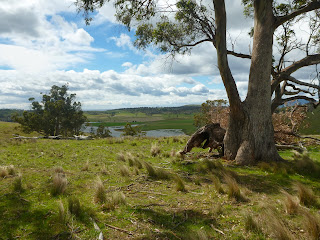 So at pretty close to 3.30pm, full of confidence and still covered head to toe in mud from the Raw Challenge, I headed off to put out my controls.

I drove to near the first control, got out all the gear I’d need for the first six controls, walked up to an obvious attack point and navigated my way perfectly to the little piece of yellow tape marking the control site.

Seriously, did you believe that?

What really happened was that I drove right past the first control that I had planned on going to before I had even located where I was on the map, and by the time I did realise my error I was closer to the second control than the first, so figured I may as well do that one given I was here.

What I hadn’t noticed was this was one of the hardest controls on the map to navigate to (at least with no control to lead you in for those last 50 metres) and so after navigating my way to a nice attack point I then wandered around scatching myself to pieces on bracken trying to find a little piece of yellow tape on a native cherry tree … of which there were only around 300 to choose from in the 50 metre radius area I had decided that the control should be in.

It was at about this time that I got a text from Kim letting me know she’d done her grocery shopping, cleaned her bike, done three loads of washing and was wondering how my day was going.

In order to protect our future relationship, I decided not to reply with what was actually on my mind as it would have put Kevin ‘Bloody’ Wilson‘s language to shame.  Instead I sent a message to the course setter indicating that I was having a ‘few problems’ locating the first control, and had decided to move onto the next control. 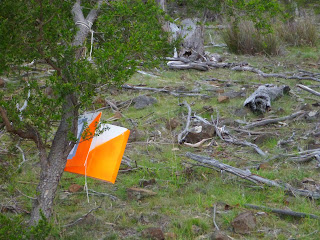 Fortunately, that was my only disaster for the afternoon, and I managed to locate and get the other five controls out with only minor teething problems after that, but still it was 6pm by the time I got back to my car, and with five more controls still to put out, including two on top of hills, I decided it was time to call it a day.

Thirty minutes later I was sitting in the Orford Hotel with a nice big steak in front of me at the end of a good day.

I did however get a few looks from those around me as I was eating my meal, and after looking at myself in the mirror afterwards I realised why … my face was still completely caked in mud, I was sitting there having a meal by himself, reading a book on my iPad drinking a lemon, lime and bitters and eating the most expensive meal on the menu.

Situation normal for me really, but I guess they didn’t know that.