Next time you’re driving up the East Coast and you come up alongside the Prosser River (about 7 or 8kms south of Orford) have a look across the river and, if you haven’t noticed it before, you’ll see what looks like a very distinct track running along the other bank.

Sections of this track are elusively visible for most of the way into Orford and it all just looks so eminently ridable … a trail waiting to be discovered. 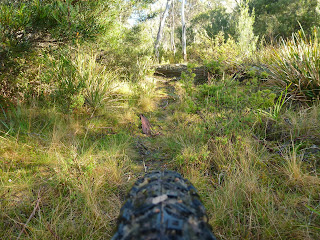 This track has tantalised me for years now, so much so that I even did a little bit of research into it (well I did some google searches which nowadays is considered research) and found out that it is the Old Convict Road from Hobart to Orford (if you’re really interested you can do what I did which was go to the State Library and get out David Leaman’s book “Walk Into History in Southern Tasmania” and read more about this track).

Of course, there were other clues which I may have seen if I’d been a tad more observant …

So this morning when I got up, I found myself in no rush to go out and get the rest of the rogaine controls (plus I had to wait for the Orford Cafe to open for brekky anyway) which meant that I was finally in the right place with time up my sleeve for an explore … 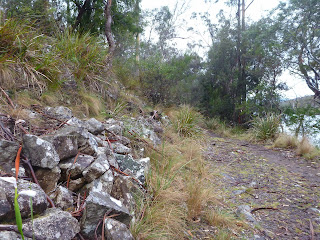 Disappointingly, there is a “No Vehicle Access” sign at the start of the trail, which I think technically means no bicycles, and I say disappointingly because it really is a fantastic trail, albeit somewhat short as far as mountain biking goes.

You follow what is obviously the old convict road for about 400 metres before cycling out into a tiny little bay where you pick up the track on the other side, you have great views out along the river the whole way and the road itself is pretty interesting.  1.2kms from the start you cross a dry river, which you follow up a small rise for another 300 metres at which point you’ll find the track veering off to the right and up the hill.

There is a less distinct track here that continues another 150 metres straight ahead and down onto the river, and if you were looking for a short walk/ride with the kids this would probably be a good place to end with a bit of rock hopping and exploration before returning the way you came. 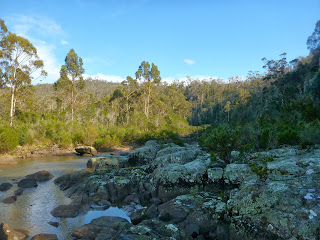 But I had bigger plans (OK, maybe the truth is that I didn’t notice this junction on the way out) so continued on up the trail moving away from the river.  After crossing under a major powerline, pink tapes suddenly appeared marking a route.  The route in turn went from being an old 4WD track to single track. 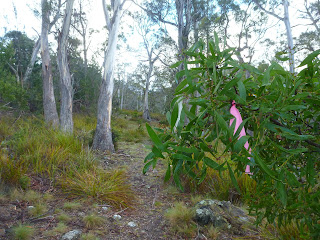 At this point the track seemed to be going in the wrong direction, but with little knowledge of where I should be going, and holding onto a vague hope that this would lead me up over the dam and back onto the Old Convict Road I carried on regardless.

Plus, truth be told, I was having fun on a sunny morning in a beautiful area so didn’t really care where I ended up. 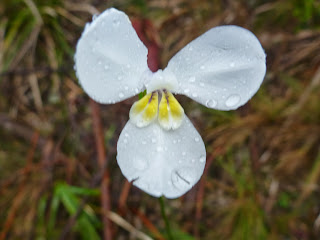 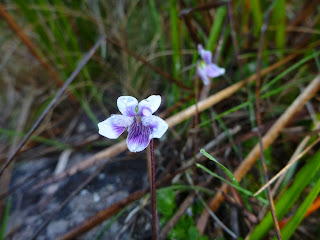 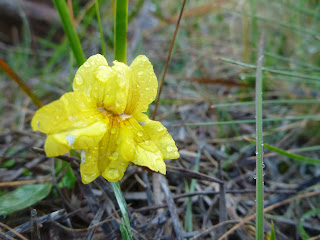 After coming to a ledge overlooking the river and dam, the track went from ride-able to rock scree, and I soon found myself, bike on shoulder, rock hopping and jumping my way along what had become more a foot pad than a track. 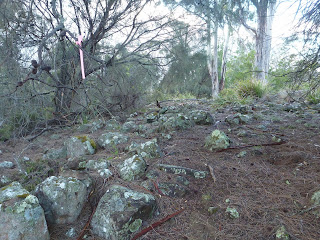 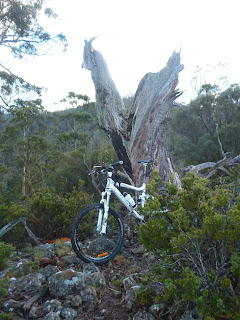 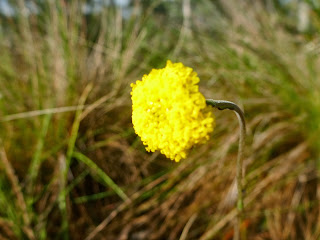 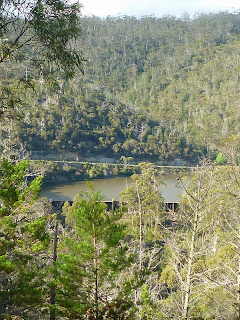 It was a bit of a laugh to begin with when I assumed I’d soon come back out onto a ridable trail, but it became less so as time went by and after about a kilometre of this, I decided to ditch the bike and proceed on foot to see where these pink tapes were taking me.

They took me almost to the top of a hill, then just before the top it looped around headed down into a saddle and finally descended back down to a tree with many ribbons and then … nothing.

I found myself standing in the middle of a gully somewhat lost and bemused … at least until I noticed some roadside cuttings to my left and realised I was back on a track (albeit a very overgrown track).

Intrigued I followed this and sure enough found another pink ribbon, but at the same time I also found that I’d lost interest in this exploration.  You see, when I say this track was overgrown, I really mean it had almost reverted back to nature … 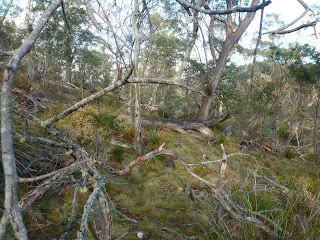 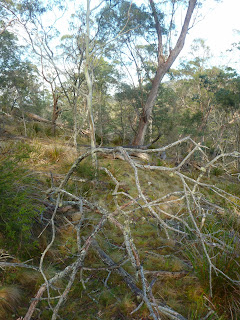 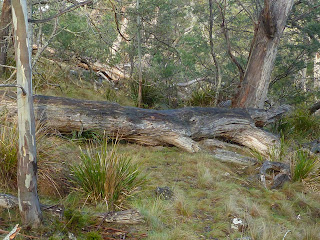 Those photos above are actually the track, and realising that I’d been out for over an hour now and that this track wasn’t going to turn around just five minutes before coming out on some panaromic view, I decided to turn around and come back at this one from the other side another day (the benefits of carrying GPS’s everywhere).

The return trip was much faster (and way more fun) than the way out as I was able to have a blast riding back down much of the trail section that I’d had to carry and push my bike up, and I do confess dreams of clearing and upgrading this trail to mountain biking standard did cross my mind (since dashed as I’ve learned that I was probably on private land at this point).

The only other mystery of the morning was this … 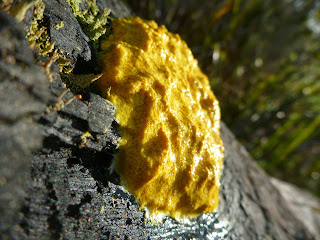 I have no idea what it is, though my guess is that it either came out of the wrong end of a very sick animal or it was a kind of lichen that I’d never seen before, either way it was very colourful.

And that was my (first) exploration of the Old Convict Road.  I already have plans of packrafting across the Prosser River to the top section of road and exploring that another time.