With the Wombat 100 coming up next weekend, but a dinner date committment on Saturday night keeping us in Hobart, we were keen to get out for a 50km ride somewhere close to home this weekend.

After our lovely after work ride around the Derwent at the end of January, and with recollections of a promise to myself to go back and explore a glimpsed trail running along the river up near Bridgewater when I was training for the Murray River Marathon back in December last year, I suggested to Kim that we do a bigger loop around the Derwent going over the Bridegwater Bridge.  As always she just asked when and where we’d be off … oh, and if I’d got her bike back from Stephan yet.

I decided to add an extra twist to this ride (given we were supposed to be training for a MTB race) and decided we should try and avoid using the Intercity Cycleway as much as possible.

This made for some interesting diversions.  We started at the Cenotaph, but headed under the highway and followed the botanical gardens walk on the inland side of the highway to the bridge, a route I prefer anyway as it is much more scenic … especially at this time of year when the leaves are falling. 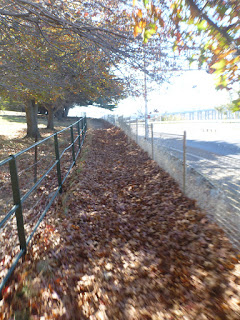 I chose to stick to the cycleway out to Cornelian Bay (the alternative being an illegal hike across the railway to then follow the sea side path) but at Cornelian Bay we cycled through the grassy park area and up the hill beside the cemetary and out to the viewing point for quite a nice view back towards the bridge.  From there you can descend out to Selfs Point and some industrial scenary before we headed up into the cemetary itself for a bit of a look around.
From the cemetary we tried to meander our way to Prince of Wales Bay via Lutana, but not knowing the local roads we kept finding ourselves being led out onto the Brooker and eventually decided to just cycle down the foot path to Derwent Park Road.  Lots of glass on the path unfortunately.
Anyway, after a brief off road meander through Giblin Park we headed around to the Derwent Entertainment Centre via the backroad and onto the new multi-colour walkway which has been installed there. 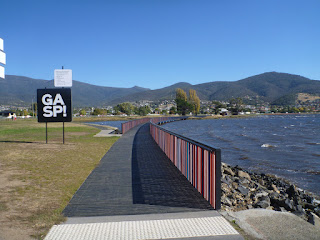 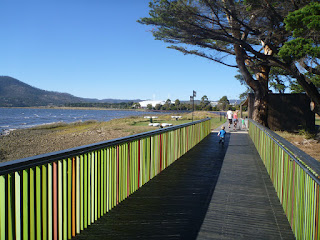 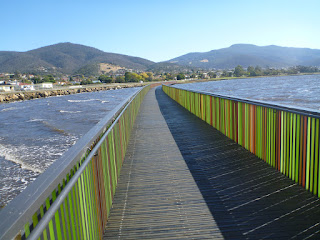 I was very disappointed to see that you were only allowed to walk along the bridges, but being good people that’s what we did (there is an alternate cycle-path on land that you can ride along).  There is also a fantastic little BBQ area between the first two bridges, but otherwise it is pretty boring (a check box activity – as in “yea, I’ve walked the bridge, move on”).  We both found ourselves musing on what a waste the whole thing is, and in true self interested fashion I went on about how much more useful such a structure would be around Battery Point or even near Cornelian Bay (where that illegal railway crossing is) whereas Kim thought it should be transplanted over to Dodges Ferry near where she lives …
We followed the new cycleway extension back onto the main Intercity Cycleway and from there decided to just follow it to the end at Claremont where I bought the worst chicken burger ever at the local chicken shop.  Throwing it away after a single bite proved to be a big mistake as I later bonked on the ride.
We battled on to Granton against a very strong wind and after the usual hairy crossing on Bridgewater bridge (we chose to cross the actual bridge section of the bridge using the pedestrian walkway) we turned right and started the downwind run.
After a bit of a false start down the road directly behind the boat ramp, we followed Gunn Street a bit further around and then jumped onto an obvious track, and let me tell you someone has done some serious trail upgrading around here since Google Earth last sent a Satellite over to say “Smile and say cheese”. 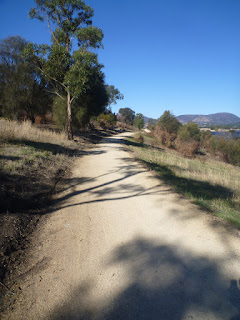 This is easy-peasy riding (OK, there is a bit up and down) and there is some great birdlife for the twitchers, but there’s also lots of gates along the way to keep the trail bikes and vehicles out as the trail meanders down and around Green Point before dropping you out on the pedestrian path on the bridge across the Jordan River where you can immediately cut off onto a continuation of the path around Herdman’s Cove.
Unfortunately, that’s where the trail ends and the next kilometres were horrid riding along the East Derwent highway with way too many vehicles going way too fast and way too close.  It was a welcome relief to pull off onto Otago Bay Road and follow this the last little bit around to the bridge and then on around to Saundersons Road where we could again escape up into the East Risdon Nature Reserve. 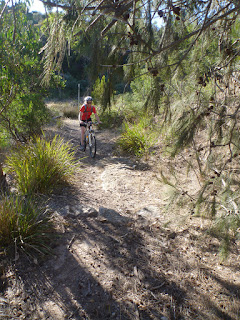 We went a different route through the reserve this time taking a few different forks and opting to head over the top of the reserve, rather than back down around the shore where Kim had her little crash last time. 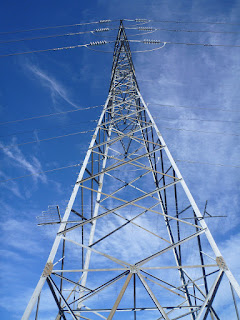 I bonked a bit after this following a lack of food and drink and struggled the last few kilometres home, but was still happy to see we clocked up nearly 60kms, and most importantly I baptised my new cycling jersey for next week at the wombat … 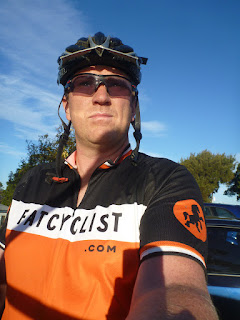 Our route can be viewed here.