As I climbed into my tent last night, I had only two thoughts on my mind – an early exit from this trip and the cold can of coke that would be my compensation for my failure when I got to Corinna.

However it’s amazing what with a nights rest can do, and my determination to see this ride through returned with a vengeance this morning, so that cold can of coke would have to wait.  The next two days were what I had come here for and I wasn’t going to give them up just because I felt a little sore, dehydrated and tired.

I packed up camp and cycled into the small shack community at Pieman Heads hoping to find a public water tank, or at least someone who might give me some water, but all the houses were empty (there is however a public drop toilet where the ferry lands, just in case anyone else uses these notes in the future).

Knowing from my previous trip down this way that there were a couple of small streams a few kilometres down the track on the other side of the river, I wasn’t too worried about the lack of water and so headed back to the beach and prepared myself for what to me was the biggest unknown of this trip … could I get across the Pieman River?

Now, one of the most obvious things to have done before coming on a trip like this would have been to practice attaching my bike to my packraft and paddling with it, but that didn’t seem like much fun to me, so instead I just watched a couple of excellent you tube videos by Steve Fassbinger displaying different methods of attaching a bike to a packraft and decided it didn’t look to hard and that I’d figure out how to do it when I got to Pieman Heads.

And so here I was – at Pieman Heads and it was time to attach the Bike and all my gear to the packraft …  voila … and it only took a few minutes to do.

Me, a bike, all my gear, a 250 metre water crossing, and a packraft that only needs to get one puncture and it would sink … what could go wrong?

Fortunately I was able to postpone answering that question as one of the 4WD guys I had met yesterday pulled up in his vehicle after an unsuccessful morning checking his cray pots, and after a bit of a chat he offered that I could come up to his shack and refill my water containers which was an offer to good to refuse.

We got to talking, like you do, and found that this guy had traveled the tracks north of here several times (though not for eight years) and as such he was a font of useful knowledge including that there were three creeks between here and Interview River which would be running with fresh water.  Interview River, which I had expected to be like the Henty River, was actually nearly as big as the Pieman at the mouth and the water was therefore tidal and salty and the river only passable on low time right at the mouth.

He also predicted that my chances of getting to Temma were about zero as his experience was that the sand dunes would be impassable and I’d be pushing most of the way.  Fortunately, when I told him my strategy was to cycle along the beach at low tide, he revised his opinion on my success to “that might work, it just might”.

That was enough for me, and before he could psych me out any further, I (half) joked that he’d probably see me cycling back past his shack in a few hours defeated, with my tail between my legs, and then set off back down to the beach where I had left my bike and packraft.

Then there was nothing else for it: it was time to cross the Pieman  …

Turned out that the crossing was an absolute doddle (lucky for me) and I was quickly packed on the other side and heading off towards Sandy Cape.

I had walked quite a way up this coast back in January (maybe 6 or 7 kilometres), and it was this walk which had convinced me that this track would be ridable (something which my friend across the river had debunked by telling me that it is good for about 8kms and then goes to sand all the rest of the way). This also meant that I knew I was in for some pretty good riding to start with, well mostly.  There were a few ‘rocky’ sections …

With only about 40kms to cover today, I was motoring along these early tracks enjoying the combination of decent progress, good intermediate technical riding conditions and gob-smacking views, when, about 6 or so kms north of the river,  I came to what seemed to be just another section of rocky track to get up …

Half way up the hill, my back tyre exploded.

I stopped immediately, assuming that it was just a small (but loud) puncture and that if I let some Stan’s run down into the hole and re-inflated the tyre (I had 4 gas canisters, a small bottle of spare Stans Stop Leaks, plus a high volume hand pump for repairs) then I’d be on my way.  It was a hassle, but not the end of the world.

So, I jumped off my bike, and turned the wheel hoping to see where the puncture was … and I saw this … 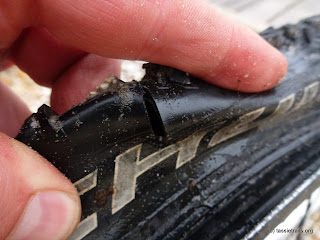 A two centimeter gash right down the side wall of my tyre.

In the next 13 seconds, whilst I may have just seemed to have been standing there staring at an unrepairable tyre, I actually had more thoughts rush through my head than I had in the previous two days, here’s a rough summary of what went through my head:

First thought: There isn’t anyway that Stan’s is going to seal that.

Third thought: Nope. that’s not going to work either – the tube will just push out of the hole and you’ll get a pinch flat.

Fourth thought:  But we’ve got patches for that.

Fifth thought: (Feeling a bit like Gollum and Smeagol at this stage). Yea, maybe if we had 5 or 10 kms to go to get back to the car, but we’ve get 60+ kms of possibly some of the hardest and most remote riding in Tasmania between us and Temma, with unknown water sources, and the possibility of seeing no one else the whole way.

[Pause as the mental wheels turned]

Eighth thought:  Options then, give me options?

Ninth Thought: We have to fix the tyre, and get back to Pieman Heads and try and get out to Corinna.

Tenth Thought:  It’s Christmas tomorrow, we have to get out today, or we’ll be here until Boxing day at least.

Twelfth Thought:   It’s unlikely therefore that we’ll get back in time … but not impossible … but what about fixing the tyre – that’s going to take time.

…  and that’s what I did.  It was a bit surreal to go from being on top of the world, on the verge of setting my tyres on 60kms of tracks that I’d spent a year planning to get too, to running back down the track I’d just come along, pushing my bike with a flat tyre  in a total transition time of under one minute.

As I’ve always said, it’s the little things that make or break a trip, and in between ragged gasps as my lungs burned and my legs churned along soft tracks, I kept coming back to one thought …