There’s actually a delicious excitement to be had inside moments of great uncertainty.

I knew where I was (stuck on the West Coast with a flat, unrepairable tyre) and I knew a very unlikely series of events had to occur for me to get from where I was to where I needed to be (roughly defined as somewhere on the North West coast by Boxing Day) and the feeling of just not knowing how I was going to pull that off, combined with the absolute certainty that I would somehow pull it off … well it was just delicious.

However, having said that, I do confess that my heart was in my mouth as I ran the last 50 metres down to the Pieman River(still pushing my fully loaded bicycle) trying frantically to catch a glimpse of the Arcadia II cruise boat …

And there it was, just pulling into the jetty.

You can imagine how happy I was about that (noting that the cruise didn’t run on Xmas day meaning that if I missed today’s cruise my options would have been to stay at Pieman Heads for two days hoping I could get a lift out on Boxing Day or attempt to packraft the 18kms up the Pieman River to Corinna). Neither option seemed particularly attractive.

I immediately jumped up on a big rock and flapped my bright yellow riding jacket around hoping they’d see me, but they didn’t respond and I quickly realised that even if they did my best option was to get back across to the other side of the river.  Thus began one of the fastest inflation’s of a packraft in packrafting history.

I would say I was on the water paddling towards the other side in under ten minutes (with bike on), and pulled up alongside the Arcadia II not 10 minutes after that.

Even better for me (but only in hindsight) as I tried to climb out of the raft, my right calf cramped severely, and who should be walking past but the captain of the Arcadia II.  He couldn’t help but take pity on me at that point as I squirmed and flopped about in agony unable to disentangle myself from the bike and packraft, and thus he not only offered to give me the required lift out of there, he helped me get all my gear on board.

It turned out that they were actually there until 1pm to give people time to walk out to the beach, so the captain told me to help myself to coffee and biscuits downstairs, get changed into some warm clothes and just make myself at home.

And that’s exactly what I did.

My original adventure was over, but I was already several steps down the path of my new adventure, which I’ll title “What the heck next?“.

I spent the next hour or so talking to the few tourists that were on board, and also found out from the Captain that there was another cyclist due in at Pieman Heads today who was cycling my route in reverse.  It would have been good to have met another cyclist out there.

We eventually headed back off up the river, and a couple on board offered to give me a lift down to Strahan, but although tempted to take their offer, it was kind of the wrong direction, and they couldn’t take my bike. 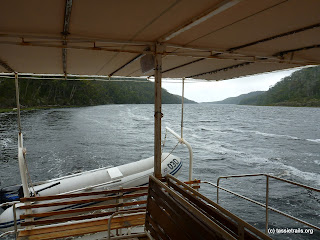 It was however still tempting as you have to understand that there is very little traffic through Corinna, and I was battling a fundamental problem that if I didn’t get out today, then I’d be unlikely to get out tomorrow as it was Christmas.

That’s where the staff at Corinna Lodge came to my rescue.  Seriously I can’t give these guys enough kudos.  Not only did they get me out of there on their cruise boat (no charge), they let me use their land line to call Kim and tell her what had happened, they held a room for me for two nights in case I couldn’t get out, they phoned around everyone they could think of to try and get me a lift out to at least Warratah, and they even put posters out on their front door appealing for passing tourists to give me a lift out of there so “I could get back to be with my wife for Christmas”.

What was I doing whilst all this was going on?

Running around knocking on every car door?   Madly planning alternative strategies?  Nope, I was sitting in their restaurant drinking free coffee and swapping cycling stories with an Israeli guy who was cycle touring around Tasmania.

An hour or so after I arrived, I met a couple reading my “save me” poster, so I introduced myself as the stranded individual and they offered to take me out to Burnie in an hour or so … but they could only take me, not my bike.

It was a hard decision (I needed another cup of coffee with my Israeli friend who I was still kind of hoping might lend me the spare tyre he was carrying) but in the end I decided that I needed to take the lift as it was likely be my only option out of there before Christmas  (it was getting along to 5pm by this stage).

Again, the staff there came to my rescue allowing me to store my bike near the staff quarters and just generally providing the kind of service that you wish places in Tasmania would provide.  I was in no position to thank them then, but I intend to get back there some time and do so.

Anyway, a little after 7pm, I finally pulled into Wynyard (turns out my saviours were actually heading there and that suited me as well as Burnie) and after some profuse thank you’s I wandered up the road to see if I could get a room in the Wharf Hotel Wynyard which had sponsored the recent Bluff to Bluff paddle (my idea of giving something back).

The last little twist to my tale comes as we arrived in Wynyard: The Christmas Eve Parade has just started and I of course have to get across the road in the middle of the parade. 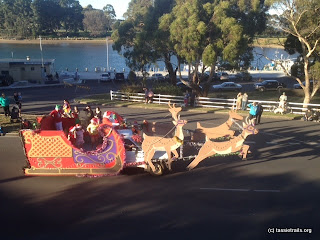 So, I’m wandering along trying to think how to do this when one of the cars stops and a gap opens up in front of it, thinking “here’s my chance” I start to quickly duck across the road and of course just as I get half way across, the guy in the car (looking sideways to the crowd) drops the accelerator and does a great big burn out straight towards me …

To be killed in a Christmas Parade in Wynyard after all that … now that would be depressing.

Fortunately all that was injured was my pride, and a slight bruise where he clipped me … and that was my West Coast Trip.