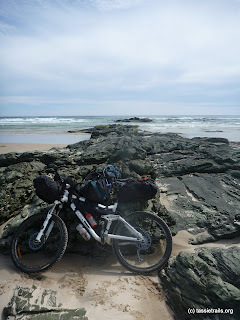 Now, I had originally planned to start today from Henty River, but after thinking about the logistics of having to pack up the bike, cycle down to the Henty Estuary, unpack and inflate the raft, paddle across the estuary, deflate the raft and pack everything back up again only to then cycle on down to the little Henty River and have to probably repeat this whole process a second time, I decided on a last minute change of plan and got Kim to drop me at Zeehan instead.

Although this avoided 10kms of beaches and two potentially problematic river crossings, it did have a downside in that it added about 10kms to the days total distance, albeit that the first 20kms would now be on roads.

Now I confess that up until the point that I dragged my bike out of the car, I hadn’t actually tried to get all of my gear into the bike bags, and there was a bit of last minute juggling to get it all to fit … as well as a few last minute decisions to leave a few things behind (such as my water filter) to try and cut down on weight and bulk.

However, even with the last minute clean out of gear, I still set off from Zeehan with a pretty hefty weight on the bike.

I wasn’t however that worried, and I planned on the first hour being difficult and told myself that I just had to take it steady and get used to the different handling of the bike.

Now, if I’d known then what I know now, I probably would have gotten Kim to take me a few more kilometres up the Trial Harbour Road,because it starts going uphill as soon as you leave Zeehan and just keeps going that way for a couple of kilometres and I (rather embarrassingly) found myself needing to stop for a break two-thirds the way up the first hill after a somewhat over-exuberant start.

Fortunately after the initial ascent, the route became much more undulating, and it turned out to be rather a pleasant section of road to the turn off onto the abandoned Granville Harbour Track (Climies Track). 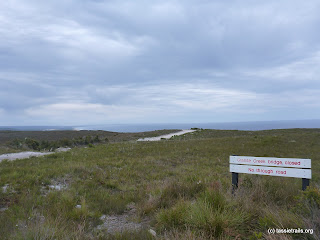 I had last ridden this track to Granville Harbour almost two years ago to the day, and I don’t mind saying that the southern section has deteriorated rather significantly over that time.  The track surface had really washed away leaving a track which is more like a river bed than road. 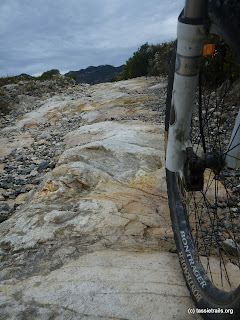 But my real problem, just a kilometre or so into the track, was that my rear tyre started feeling a bit soft, and a quick check showed that the tyre must have punctured as the pressure had dropped below 20 PSI.

I had a horrible sinking feeling at that moment that with Kim already well on her way back towards Hobart (and with no mobile reception until she got there) that I was about to regret the decision to not bring a spare tube with me (justified on the basis that in all my years or riding I had only ever once blown a tyre and that was when the brake pad had been misplaced and worn through the side of the tyre).

With a bit of nervousness I dug out my pump (which of course was at the bottom of my backpack under all my food and everything else) and pumped the tyre back up to 35 PSI and then tentatively took off along the track, stopping every 100 metres or so to check the tyre and alternatively convincing myself that it was OK, no going flat, no OK, no going flat … it was only about an hour later that I finally managed to convince myself that it was all OK and that the tyre had successfully resealed itself.

Thankfully, somewhere along the way whilst this was going on, the track surface improved and I began to really enjoy the riding as I made my way towards my first planned rest break for the day at Granite Creek.

It was a stupid crash.  I was heading down the last hill towards Granite Creek, and I had just noticed a 4WD a ways in front of me and I had been thinking about trying to catch up and overtake it (hey, who wouldn’t?).

So I was flying down the hill when suddenly a bee or wasp or something bounces of my chin, goes down my cycling vest and the next thing I feel is a sharp sting right above my heart.

Without thinking I grabbed at the stinging area with my left hand trying to kill whatever was biting me and simultaneously I threw on the (front) brake with my right hand.  The result of these combined actions was me doing my best superman impression as the bike folded under me and I promptly went flying over the handlebars … except this cyclist ain’t no man of steel … 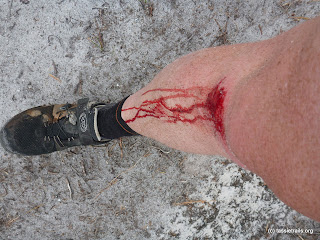 It hurt, but nothing too serious and I was able to carry on down to Granite Creek, albeit a little slower, for a bit of a break and a clean up.

I knew at this point that I had broken the back of this section and that it was fairly easy riding out to Tasman River where I would rejoin the gravel road to Granville Harbour, so I took the time to explore a few side trails down to the coast and just enjoy the route.

I was only mainly right about the easy riding … I just didn’t know about a few steep climbs between Tasman Creek and Granville Harbour … nothing horrendous, or even hard, they just weren’t expected and that made them feel hard.

After what felt like ages, I finally pulled into Granville Harbour and rode around to the far point for a well deserved lunch.

It was then that I realised that it was already 2pm and I was way behind where I thought I would be and I still had the unknown section to Pieman Heads to do.

I was also in for a bit of a nasty surprise as I set off after lunch to find myself cycling, and then pushing, though sections of soft sand … this wasn’t planned, and this was just the first of a few surprise on this section.

I had relied on being able to get regular water refills from creeks right along this track, but as I was to discover many of the creeks in the section just north of Granville Harbour were stagnant, smelly, muddy pools or (further up the coast) tasted brackish and terrible.  I held out refilling my water bottles as long as I could, but eventually I just had to drink, and so I walked up a creek as far as I could when I came down to a beach and filled up there.  It tasted horrible, but it didn’t kill me or make me sick.

The other main surprise was the number of people camping along this section of coast.  I had expected a fairly remote section of coastline but I probably passed 10 campsites and as many vehicles on my way up to Pieman Heads.

However, I get ahead of myself.  The real shock of this section were the long sections of soft sand (I couldn’t pick those up on google earth and I had expected a track similar to the one from Trial Harbour).  The result of this was that I found myself pushing the bike for kilometre after kilometre, only occasionally being able to jump on and ride short sections of track.  All up I’d guess that I pushed maybe 10kms, although I could have ridden more if I had been less tired or had less weight on the bike.

The early afternoon soon stretched into late afternoon and I realised that this was going to be a very long day indeed.

Fortunately, the area itself was everything I’d hoped for and more with simply stunning coastal vistas and challenging sections of track (when I could ride). 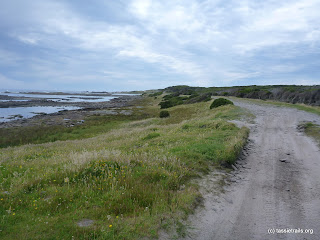 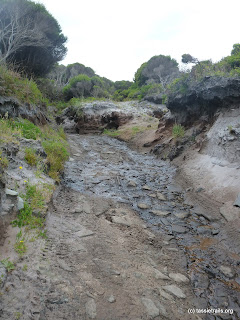 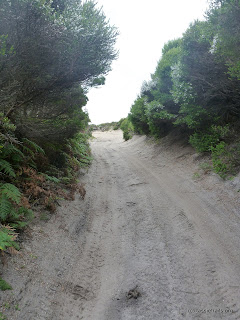 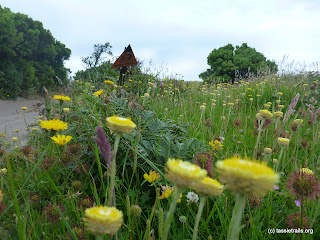 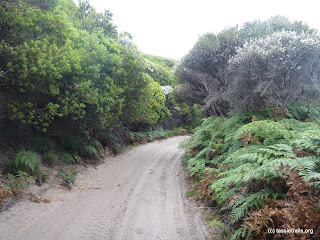 Eventually I emerged out onto Four Mile Beach where I finally found that brackish creek I mentioned and was able to refill my water bottle (I tipped this all out about half way up the beach and refilled at a second creek which tasted better) before setting off on the challenging ride up the beach directly into a strong headwind.

It was a gorgeous ride, despite the wind fighting me the whole way, and I took plenty of opportunities to stop and take some pictures along the way … 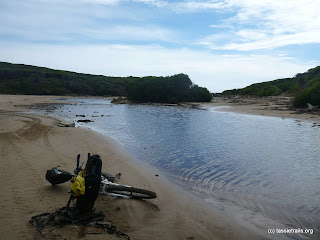 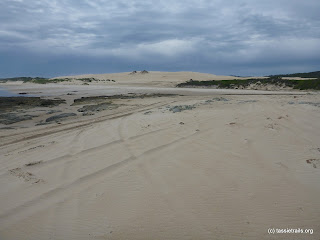 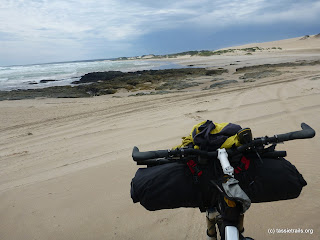 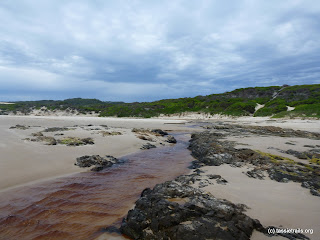 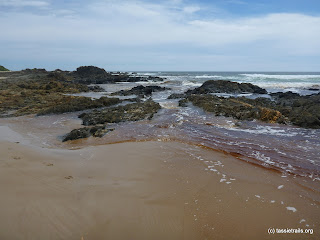 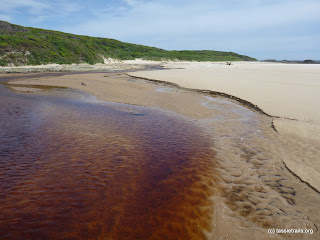 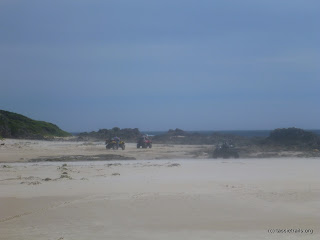 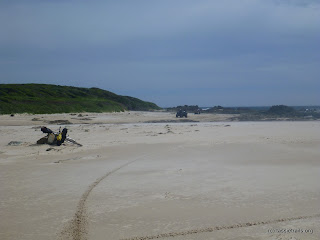 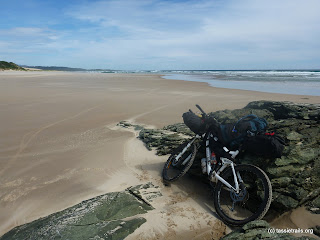 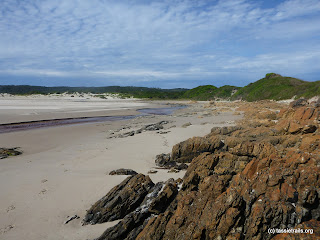 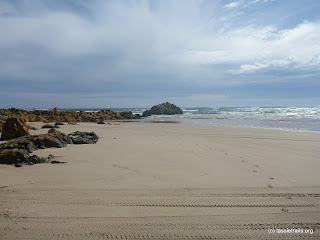 Coming off the beach, the track splits.  It was obvious that most traffic was going around to the left, but there was a landcare sign at the junction saying that the main tack went to the right and so I felt obligated to follow that … which I did for about a kilometre before deciding enough was enough and turning back around and going the way that everyone else obviously went.

and, oh it was a joy, the track surface was rutted and muddy, but it was ridable all the way out to the headland and beyond as I cycled through this surreal landscape of rock gardens and wallaby grass. 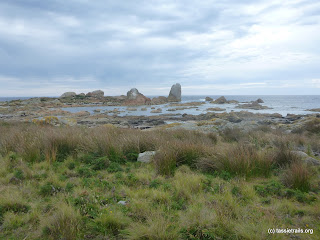 I met a few more people camping out this way, and one couple passed me in their truck (as I was pushing up yet another hill) and came back and offered me a lift to the heads.  I am pleased to say that even at this late stage I still had the willpower to decline their offer.

After what seemed like forever, I finally pushed to the top of one last hill and there below me in the distance was Pieman Heads.  Hooray. 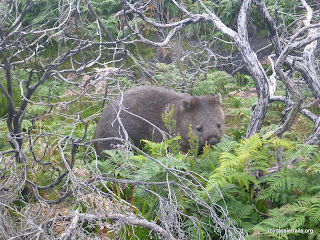 Then I crashed for the second time. 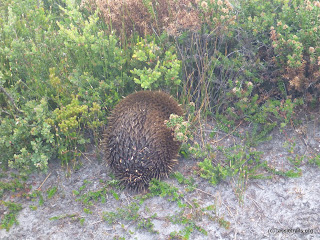 This time my front wheel just hit a section of soft sand and before I could register what was happening I was doing my second impersonation of superman for the day, somewhat ironically landing on exactly the same knee as my first crash and thus successfully managing to push a whole lot of dirt and mud into the already open wound.

Somewhat dazed, dehydrated and sore I very carefully cycled down the rest of the hill and realising just how exhausted I was, I decided to not risk any more crashes and ended up pushing my bike most of the last few kilometres around the beach and over the rocks (it was high tide by this stage) to the camp we had stayed at when we kayaked down here back at the beginning of the year.

Fortunately, just as I arrived (the actual camp we stayed at was overgrown so I continued on to the main campground where they have now also removed the toilet) a couple of young guys in a 4WD came past me and stopped for a chat.

I asked them if they knew if there were any public water tanks nearby, and next thing I knew they were emptying out my water bottles and bladders and filling them with crystal clear, cold water from their eski.

I didn’t realise how thirsty I was until I drank my entire water bottle in one swig, leaving me to ration my remaining water carefully overnight as there was no other drinking water on this side of the Pieman River.

I finally stumbled into the deserted campground around 8pm and managed to set up camp and make myself some pasta before collapsing into bed. 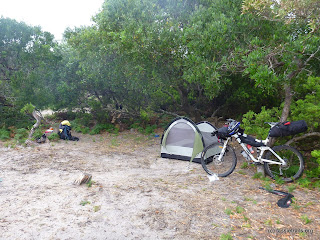 As I sat eating my dinner I was absolutely convinced that my trip was over.  I was sore, beat up and exhausted, however I took to heart some advice I had read recently on an ultra-endurance athletes blog  … never decide to give up before you go to bed, leave that decision to the morning.

Things can always look different in the morning.