In my experience, it’s usually the little things that lift an adventure from being good to great, or in the reverse, which bring it undone.

That’s why I was only slightly concerned when, as we were cycling along Ocean Beach on the West Coast, a rather significant river that wasn’t on my GPS suddenly appeared on the beach in front of us. 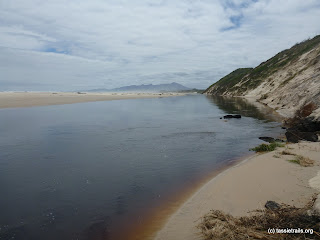 This was no creek … this was a river and it looked deep, wide and was flowing pretty fast …  therefore (using my logic in reverse) it was too big to bring my adventure undone. 🙂

I just had to find a way around or through it.  No problems ….

But as usual, I’ve got ahead of myself, and started the story somewhere in the middle, so let me go back to the beginning.

I’ve been dreaming of my west coast adventure since I first thought of it early this year, and the Xmas break was my only chance to have a serious crack at it, so an early family Christmas dinner was arranged on the Friday night before Christmas, and then early Saturday morning Kim and I threw everything that I figured I might need into a car and we set off for the West Coast.

Today was to be an easy introductory loop along Ocean Beach before Kim headed back to Hobart on Sunday morning and I was to be on my own for the rest of the trip:  Just me (my bike, my packraft, my paddle, my tent, my thermarest, my sleeping bag, my trangia, my fuel and my food) and the wild west coast for four days … oh, and an almost impossible itinerary to get me up to Smithton by Boxing Day in time to meet Steph and Kim at the other end for some R&R.

We arrived in Strahan around noon, and decided to just throw the bikes off the car and head straight out to Ocean Beach which was about 6kms away along flat, mainly gravel roads … 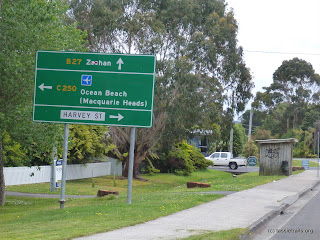 and then when the roads finished, the real riding began … 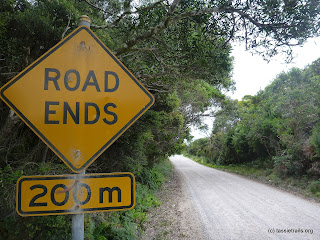 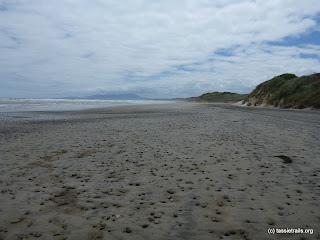 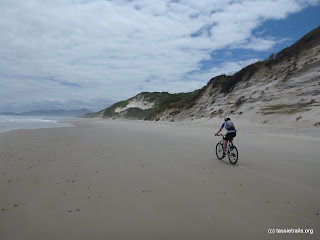 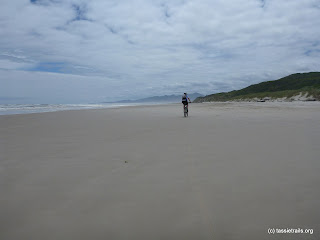 Now, I’ve previously ridden the loop from Strahan down the road to Macquarie Heads and then back along Ocean Beach to where we came out onto the beach on this trip, and so this time I decided to skip this section as what I really wanted to explore was the section further up the beach.  So when we hit the beach, we turned right and headed North.

The plan was to cycle up to the Henty River, exit along some bush tracks and then ride back to Strahan via the main road.  Then tomorrow I’d restart my ride at the Henty River and continue travelling north.

I was fairly confident that this loop was possible having a vague recollection of having previously ridden down to the beach along the Henty River many, many years ago (Yes, we’ll come back to that).

Now according to my Google Earth measurements, it was about 11kms from where we hit the beach to the mouth of the Henty River, and although you might think it would be fairly monotonous cycling along a beach for 11kms, it was actually a quite varied landscape as the beach changed from soft sand to rocky pebbles  and back and as we crossed numerous small creek crossing, witnessed changing dunes, passed various flotsam and jetsam and of course we had the backdrop of the waves crashing in onto the shore the whole way. 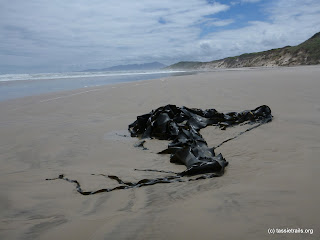 and then if all else failed, there was always the person next to you to race …

Then, about 8kms up the beach, we came to the unmarked river where I started this post, and despite my earlier comments, this was actually quite a challenge, though with a bit of perseverance (and after disappearing stomach deep into the river) I did finally get across … with the use of a stick, and without the difficulty of having to manhandle a bike. 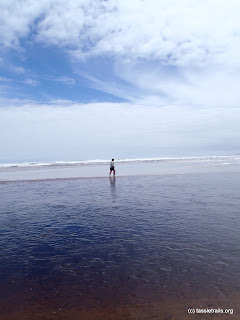 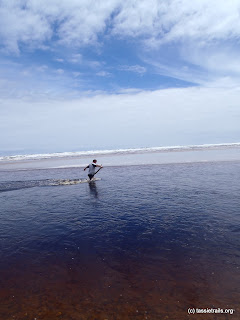 I therefore decided to try and find an alternative way back, so headed upstream a few hundred metres to try and get across where the current seemed a lot less.

Three steps from shore I was almost in over my head, and scrambling back the way I came … that obviously wasn’t the way.

Next I headed down and tried to cross right where the river mouth hit the ocean.  This approach, in retrospect, made sense given that the incoming waves would slow the river current forcing it to drop its sediment and lead to a shallowing in the water depth… the result was a fairly simple knee deep crossing, if timed between the waves … 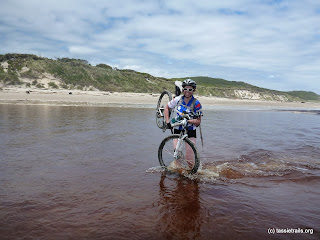 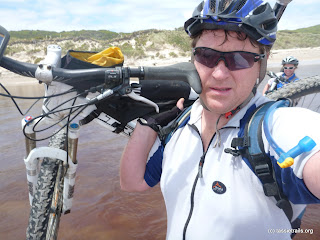 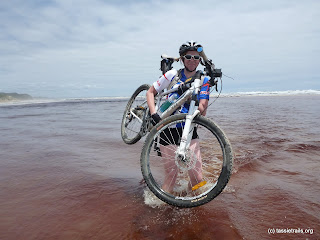 I still had no idea at this point where this river had suddenly appeared from, but a quick check on the GPS showed it was only another 3kms to the Henty River where we could exit out to the highway and this was all I was thinking about at this point as the tide was definitely coming in and the hard, ride-able sand was becoming more elusive.

We cycled (and increasingly pushed) our bikes up to where my GPS showed the river mouth to be, to find … nothing …  all we saw was sand stretching off for kilometres into the distance.

It was at this point that I had to give some more thought to a nagging thought that had been growing in my head since we passed that unknown river … it goes like this:  “large rivers don’t just appear, so where did that river come from?   Surely it couldn’t be the Henty River … could it?  Surely the Henty couldn’t re-route itself three kilometres up the beach?  Surely?“

Finally, just to give myself some peace of mind, I suggested we push our bikes up to the top of the beach … just to prove that the henty river wasn’t up there somewhere.

Now if you haven’t been to Ocean Beach on the West Coast, then I’ve been remiss in not explaining that Ocean Beach is big … it’s about 35km of unbroken beach from one end to the other, it is frequently 200-300 metres wide (shore to top of beach) and the sand dunes can stretch back a kilometre or two behind the beach.   I once walked from the car park at Henty Dunes down to the Beach over the dunes … it took me nearly an hour.  This is a big beach.

It was therefore perfectly possible to be cycling along down on the water edge, as we were, and be completely unable to see what was at the top of the beach.  In this case, as we discovered, the Henty River was in fact running along the top of the beach parallel to us for all these kilometers …  we had spent all that time and effort crossing a river we didn’t need or want to cross today.

This was not necessarily good (note the under-statement), however sure in my mind that I had previously cycled down along the Henty and onto the beach, I suggested we keep cycling up this side of the river, certain that we would find a ford of some description to get across.

We finally came to a point where the river opened up into a wide estuary and there was nowhere else for us to go, so I again tried to walk across the stream, but was defeated by the depth and we resigned ourselves to returning back the way we had come, with the concerning knowledge that the hard sections of the beach we needed to cycle on seemed to be rapidly disappearing below the incoming tide.

As we cycled back to the river mouth we discovered some rather disturbing “quicksand”.  It was hard to describe this stuff, but you’d be cycling along on hard sand and then suddenly the whole beach section you were riding on, including you and your bike, would just drop 10-15 cm and you’d find yourself stuck in this rather disturbing (and difficult to get out of) soft sand.  Just like quicksand the more you struggled, the deeper you went.  Fortunately, it seemed to only be a surface phenomena and we never got into any serious problems, but we did hit it at least three different times, and it was kind of freaky.

After recrossing the river mouth, we started searching for some alternative exits …

… exploring any trails that looked like they might vaguely lead us out onto the highway, but all we found were dead ends … either tracks leading us out into large areas of sand dunes or impenetrable brush. 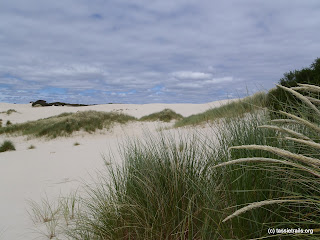 Lots of pushing through soft sand was involved, and although on several occasions we got within a few hundred metres of tracks that, on my GPS, would have led us out to the highway, we were never able to get that last little bit and eventually decided to just backtrack to the beach and head out the way we came in.

Turns out this was the smart option, with the riding along the beach remaining very easy despite the incoming tide, and so before we knew it we were off the beach and back in Strahan checking into our accommodation before heading into town in search of a big dinner (my final meal) before returning for an early night of packing.

All up, it was a great day, despite the little surprises along the way.  The only disappointment of the day was that the Caravan Park we were staying in wouldn’t let us use their hoses to wash down the bikes … so I had to use the small kettle to carry out enough water to wash off all the salt  (much to the annoyance of Kim who was trying to have a shower and didn’t enjoy the hot and cold water changes caused by my kettle filling).

… and so that was the ‘easy intro’ day.  Tomorrow, was to be the real test of this trip … the longest day, and the first day with a full load on the bike.