Skip to content
Ever think you know a place only to discover that really you don’t?

That happened to me last week … and I’ve decided to call it the Mandelbrot conundrum … you know after the Mandelbrot set thing where the more you zoom into it the more detail you discover, sort of an infinite and repeating zoom lens …

Here, watch this video if you’re new to fractals and don’t know what I’m talking about …

So, back to the main topic, Kim and I head out for a ride after work last Thursday, and I’m talking about cycling out the back door of work pretty much in the middle of Hobart’s CBD for an hour and a half ride.

There’s no way that a curious explorer like me who has explored, rogained, orienteered, walked, cycled and paddled every square centimeter of Hobart is going to discover a single metre of new track so deeply within the boundaries of my own back yard, right?

After first crossing the Tasman Bridge to the Eastern Shore, we headed up to Gordon Hill behind the High School and straight away I found myself on a track that I’d never been on before in my life which wound its way around the hill above the A3 highway. 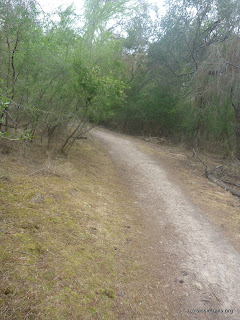 The track came out above the old golf course where there has been a lot of jump building going on, and although we didn’t explore the area, there looked to be lots of interesting options for those wanting to play.

We however carried onto and across (the very busy) Gordons Hill Road onto a new concrete cycleway which is being constructed in front of a new housing development and which anyone who has headed out towards the airport recently couldn’t have helped but notice. 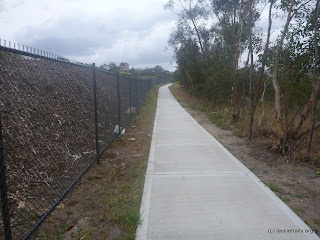 Funny thing was, that it took us longer to get onto the track than it did to ride it … we jumped on, cycled over a short hill (the section you see from the highway) and then immediately dropped out onto a small foot-pad again … 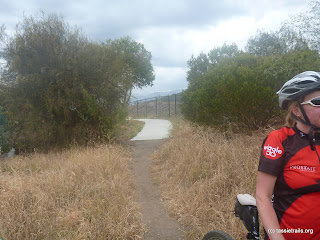 It couldn’t have been longer than 300 metres, but still, it was new track to me, and managed to get us further out of town whilst keeping off the roads.

From here, we followed some familiar trails out around the Clarence TAFE campus and onto Flagstaff Gully Road which we followed up to the Reservoir before turning off onto a road into the Pilchers Hill reserve where I thought we’d cycled before when we did a rogaine a year or so ago.

We must have turned too early, because we ended up cycling straight up the hill to the water storage and then as we zoomed down the other side we took a left when we should have taken a right and again found ourselves heading down a trail I’d not previously explored. 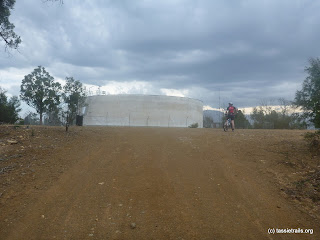 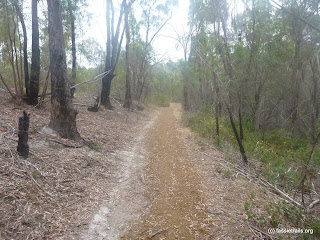 The track quickly dropped back down towards Fagg Creek, which I had ridden along before, but in the spirit of the fractal universe, we had another chance to turn right, where previously we’d turned left, and we were on new trail for the fourth time, this time heading down Geilston Creek Road.

Dropping out behind Geilston Bay, we found ourselves on yet another section of trail I’d not ridden.  It was only a couple of hundred metres, but it ran along the creek between the top (original) bridge and around behind the BMX park towards the new bike bridge.

From there, we just followed the Clarence Foreshore Cycleway back to the bridge, but still, despite this being a trail we’ve ridden plenty of times this year alone, change was happening with new sections of cycleway being built between Lindisfarne and the bridge. 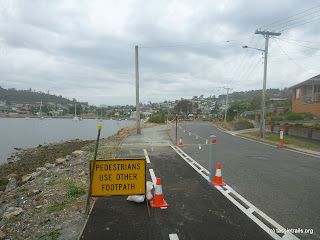 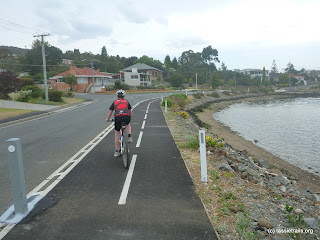 That’s five new pieces of trail, admittedly most of them short, discovered in a single 23km circuit starting from my own backdoor.

As I said up front, this ride was a Mandelbrot conundrum …  a previously invisible network of trails inside the network of trails I knew so well … and I think it is very cool … I have to go explore my own backyard a bit more often.

Who knows what else is out there waiting to be discovered.