Sometimes getting to the starting line can be the hardest part of a ride.

Today I had decided to do the Mountain River Meander 100km Audax … my first ever Audax ride and the first 100km ride I would have done since I did the 100 (Little) Miles to Nowhere with Cath back in June.

If you’ve never heard of Audax, then the quick overview is that they’re non competitive rides, usually of ridiculously long distances (they start at 100km and go up, way up, from there) but they’re not races … you basically have to maintain a minimum speed over the distance (15km/hr) and it can be as competitive or as social as you want it to be after that.

I was really keen to do the ride last night, but when I woke up this morning I was hit by a wall of doubt … I had used up my only spare tube fixing a flat tyre last night so if I got a flat today it was game over; I hadn’t ridden 100km for nearly five months; come to think of it I hadn’t ridden my road bike for nearly five months; I would be riding with a group of people who trained to ride 1,200 km audax’s (no that is not a typo) so was kind of out of my league; I was still a bit fatigued from my two rides this weekend and finally … I’m scared of new things (true story).

Then, as I was wavering on the edge of indecision, I managed to wrench a muscle in my neck whilst making breakfast, meaning I could barely turn my neck.

Amid this wall of reasons not to go, I could only think of one reason to actually go on this ride … given my fitness and state of preparedness it sounded like an epic adventure (or disaster) waiting to happen.

Suffice to say that was good enough for me, so I downed a couple of ibuprofen’s, put a big smile on my face and headed down to do the ride …

… five minutes later I was racing back home after realising I had left my socks and cycling shoes behind, but then I headed down to do the ride. 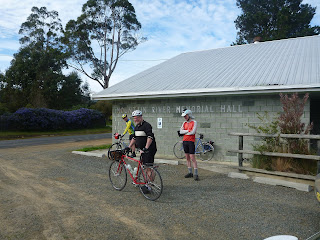 There were only four of us, and in the tradition of Audax we spent as much time chatting and enjoying the ride as we did hurting ourselves.  Well when I say ‘we’, I actually mean ‘they’.

I discovered that my front wheel was badly buckled when I turned up at Mountain River, and although I managed to tweak the spokes enough to get the wheel to turn through the brake pads, it wasn’t a happy wheel and it constantly creaked and groaned the whole 100kms, so I kind of sat 50 metres off the front of the other three for most of the ride so as not to inflict the noise on them for the whole ride. 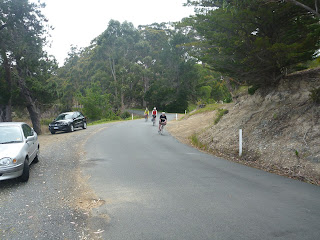 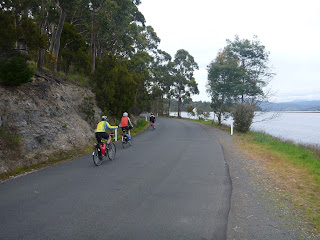 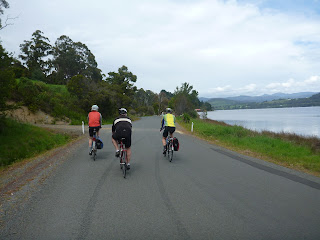 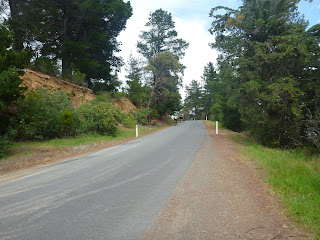 About 70kms in, we got to Cygnet and I had the best burger in my life (that’s also not a typo) and yet I still managed to get over Balf’s Hill soon thereafter and that kind of summarised the day … it just worked. 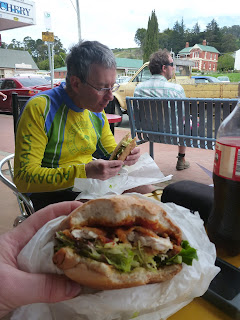