I pulled into the designated car park for the Tasmanian edition of the 100 Miles to Nowhere just fifteen minutes before the start.

Despite my late arrival, I was still able to find a brilliant car park right on the start line … this was going to be my day.

As I prepared for the start, I knew there was only one person I needed to worry about in today’s event:  that being the only person who hadn’t told me that the idea of forking out nearly $US100 to ride round and round in a circle going nowhere wasn’t a completely stupid idea.

Yea, you know who I’m talking about.  The female Lord Voldemort … she whose name we don’t speak out loud.  We call her cmc in this blog.

I knew from our paddling bouts just how dangerous she could be.  I mean not only is she fitter and faster than me, she is also a brilliant strategist.  She is so organised that she arranged to get a puncture before we even started … I mean how smart is that? get the punctures out of the way before you even get on the track.  Wish I’d thought of it.

Despite my protests, the race organisers decided to postpone the start until cmc turned up, and when she did arrive, she pulled out her secret weapon … a bike that was so old, it could only have come from the future. 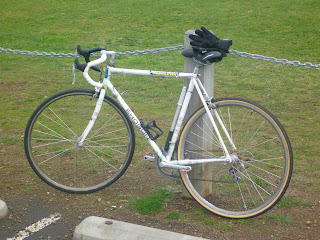 Cmc had left her normal support crew at home to “look after the kids”, so she logically assumed that I would act as her support crew/caddy as she instructed me to oil her chain and provide wardrobe recommendations (long gloves or fingerless?) whilst she prepared herself to begin what I knew she saw as her inevitable victory.

I meekly complied, and just 25 minutes after the official starting time of 8am, we rolled across the starting line for our first of forty laps.

I should probably insert a small interlude in my fantasy ramblings to say that after a bit of negotiation and discussion, we had agreed to ride the Joggers Loop circuit at the top of the Hobart Domain.  This being a short, almost traffic free 2.5km loop that afforded us some fairly nice views around Hobart as we circled around and around and around the hill.

The first few laps were fairly friendly affairs as cmc warmed up into the circuit, but sure enough as soon as she sensed an opportunity, she tried for her first break … coincidentally, this break occurred just as I pulled out my camera to take a photo and so I was able to capture this shot of her going away … 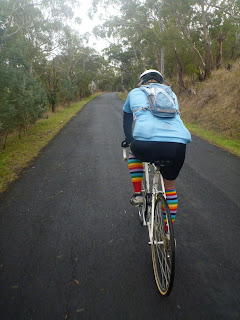 I knew at this point that there was only one option if I was to stay in this event.  I had to cheat.

I managed to hold onto cmc’s back wheel until the first scheduled break 10 laps in, and then as soon as cmc looked away, I collapsed behind my car and posted a message on the Dog Owners of Hobart facebook page claiming that there were two crazy cyclists up at the domain threatening to take over their track, and so they had to get up there ASAP to assert dog walkers rights on the domain.  That should slow her down.

We set off on our second set of ten laps, cmc busy psyching me out telling me how this was the hard set, this was the set that was going to hurt and how hard it was going to get through this set.  Thankfully, all I could see were people getting out of cars with dogs, and they were all off leash.  My cunning plan was working.

So it was that I managed to hold onto her wheel for the next set of ten laps, and I could see her frustration building and her wonderment increasing as she tried to understand why I was politely apologising to all these dog owners for us getting in their dogs way as their dogs dashed back and forth in front of us completely out of control.

Next, I launched Plan C … I texted Kim and pleaded with her to get up here and pretend to join us for a few loops, but in fact she was to be my domestique … sitting in front of me towing me around the loops.  It was a brilliant plan … except I was so stuffed by the time that she arrived that despite the fact she was on a mountain bike and I was on a road bike, she still managed to pull away into the distance …

If that wasn’t bad enough, next thing I knew cmc and Kim were off chatting to each other and I knew that if I didn’t move to jettison Plan C immediately, then the next thing I’d see would be Kim working for cmc, not me.  This was not the plan. 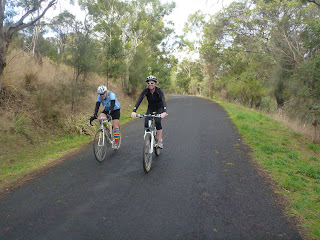 By this stage, we were into the last set of ten laps, and this was where cmc pulled out her ‘disdain’ card.  She had arranged for her own support crew to rock up, and I had to suffer the indignity of not only having cmc ride off into the distance,  but her kids, and husband (and yes, even Kim) as well … sigh.

However, despite these moves, by some miracle we found ourselves together on the final lap locked neck and neck in a battle for the finish.  We approached the last hill and although I hit the bottom of the hill by myself (thanks to a near comatose/suicidal dash in front of a car) by the time I came to the crest of the hill I could hear her coming back onto my wheel with just 200 metres to go to the finishing line.

Now my recollection of what she said at this stage was “This race is mine.“, though she will no doubt deny this and say it was something more like “wait for me, I got caught by that car“.  I mean, who do you believe?

We came up to the finish line, and it would have been a photo finish … except cmc’s camera was in Kim’s car and mine was on the bike, so without a photo to divide us the officials had to declare us both winners, and we were thus both awarded 1st place in our respective divisions of male and female elite Tasmanian cyclists.  After all that is what the 100 Miles to Nowhere is all about, right … Winning … or have I got that wrong as well? 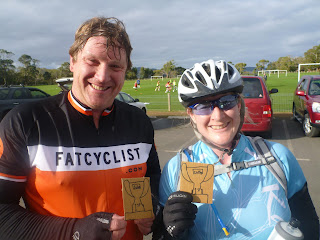 POSTSCRIPT.
OK, so this blog probably doesn’t make any sense to anyone but me, and yes, it may have very little to actually do with the reality of the day other than the fact that we did go out and we did ride 100 ‘little” miles … ie. 100kms to nowhere around the Domain which totaled 40 laps. 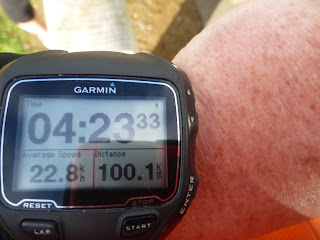 It was cmc’s first century ride, and my first century since I broke my knee early last year, so it was a big achievement for both of us.  As cmc succinctly said in a later email “we are awesome” … although maybe she meant to send that to someone else (probably Kim).  I thought it better not to ask.

So why this blog?  Well cmc got in first with her blog entry which you can read here and she pretty well described what really happened, plus she did do one small, evil thing which was use my photos before I could, so I guess in that sense she did win.  Darn it.

Full details of lap times etc. can be seen here.