About a year or so ago, I came across a new type of riding … light weight bike-packing.

The concept is easy enough to understand – it’s like a cross between backpacking and mountain bike touring, except (as I choose to define it) instead of using racks and panniers, you use bags which are attached to your frame, seat and handlebars to carry your gear. 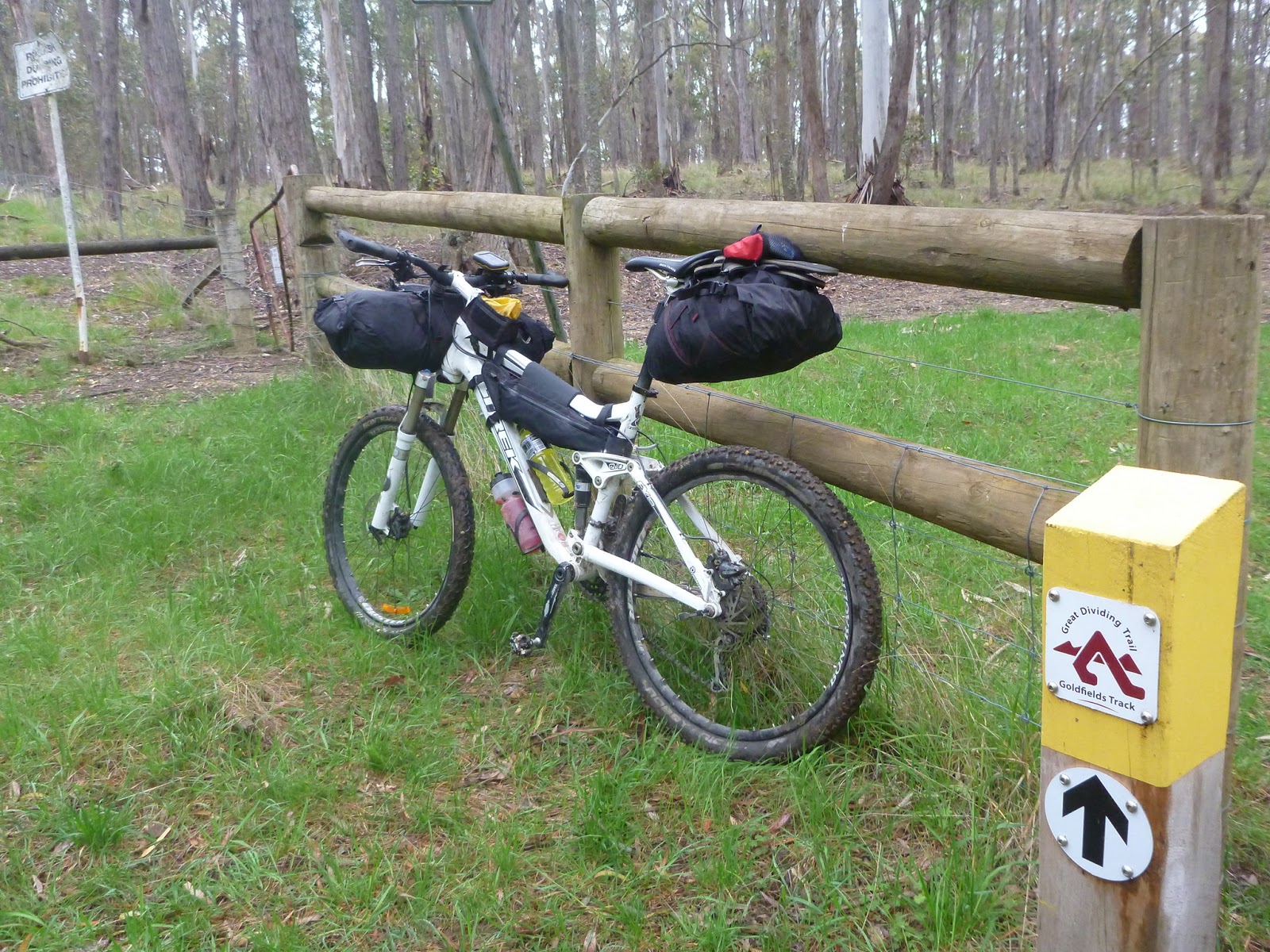 I liked the idea (a lot), so a few months ago I forked out the necessary money and purchased a set of Revelate Designs bike bags with the plan to use them in the USA.  That plan didn’t come together so I didn’t get a chance to try them until this Hobart Show Day Long Weekend when Kim and I decided to cycle the  Goldfields Track in Victoria (more about that in a later blog) … 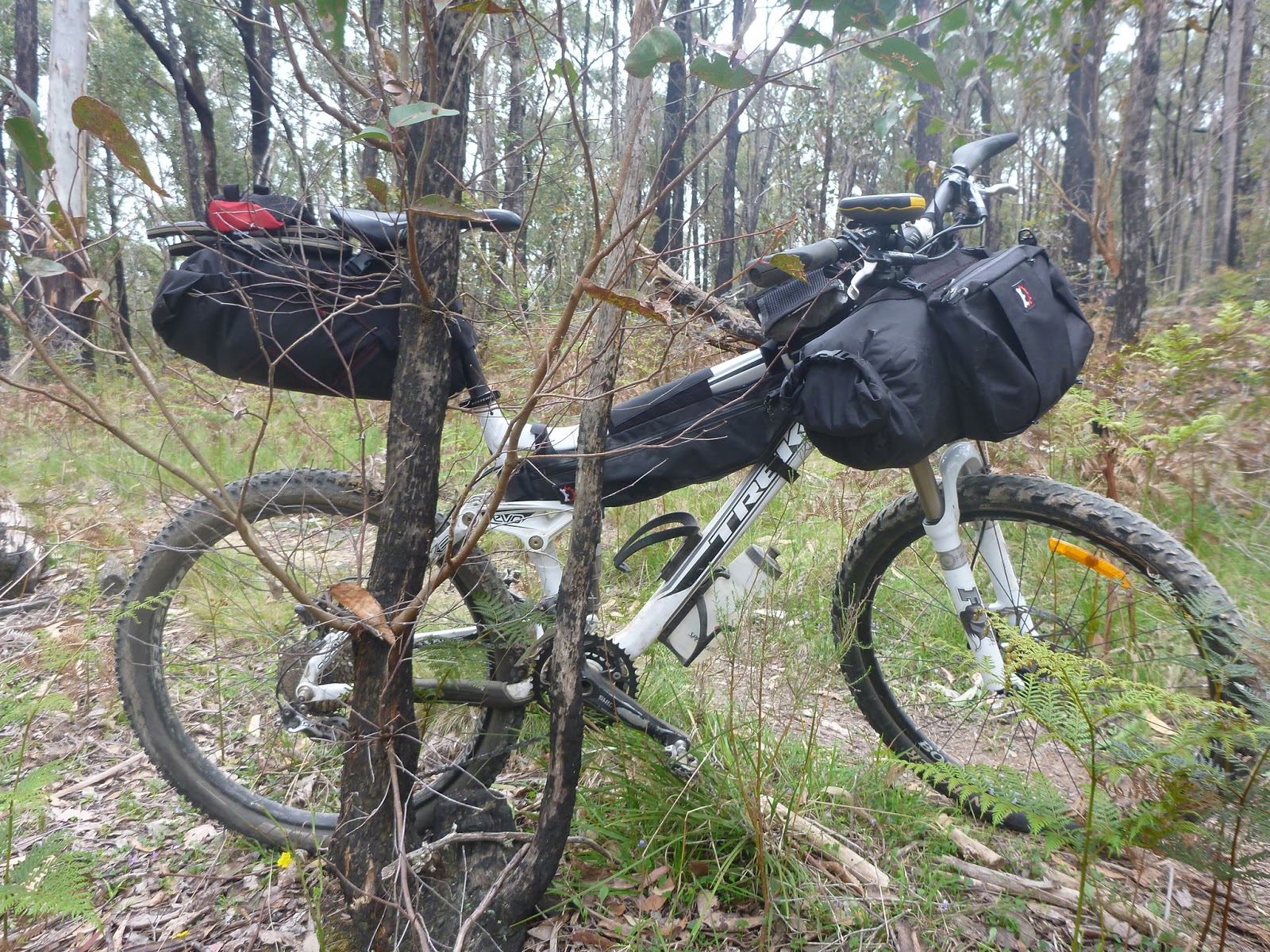 Stepping back a bit, you may ask why bike bags would be an attractive proposition.  Well my answer is that if you’ve ever tried to ride a mountain bike across single track with panniers you wouldn’t need to ask that question.

However, if you haven’t had that joy, then here’s Kim demonstrating four of the key reasons …

Reason 2: Panniers do not fit well between all those gates they install on these tracks to keep motorbikes out … and there’s lots of these darn things on most long distance cycling trails.  Guess I could have warned her about that as well. 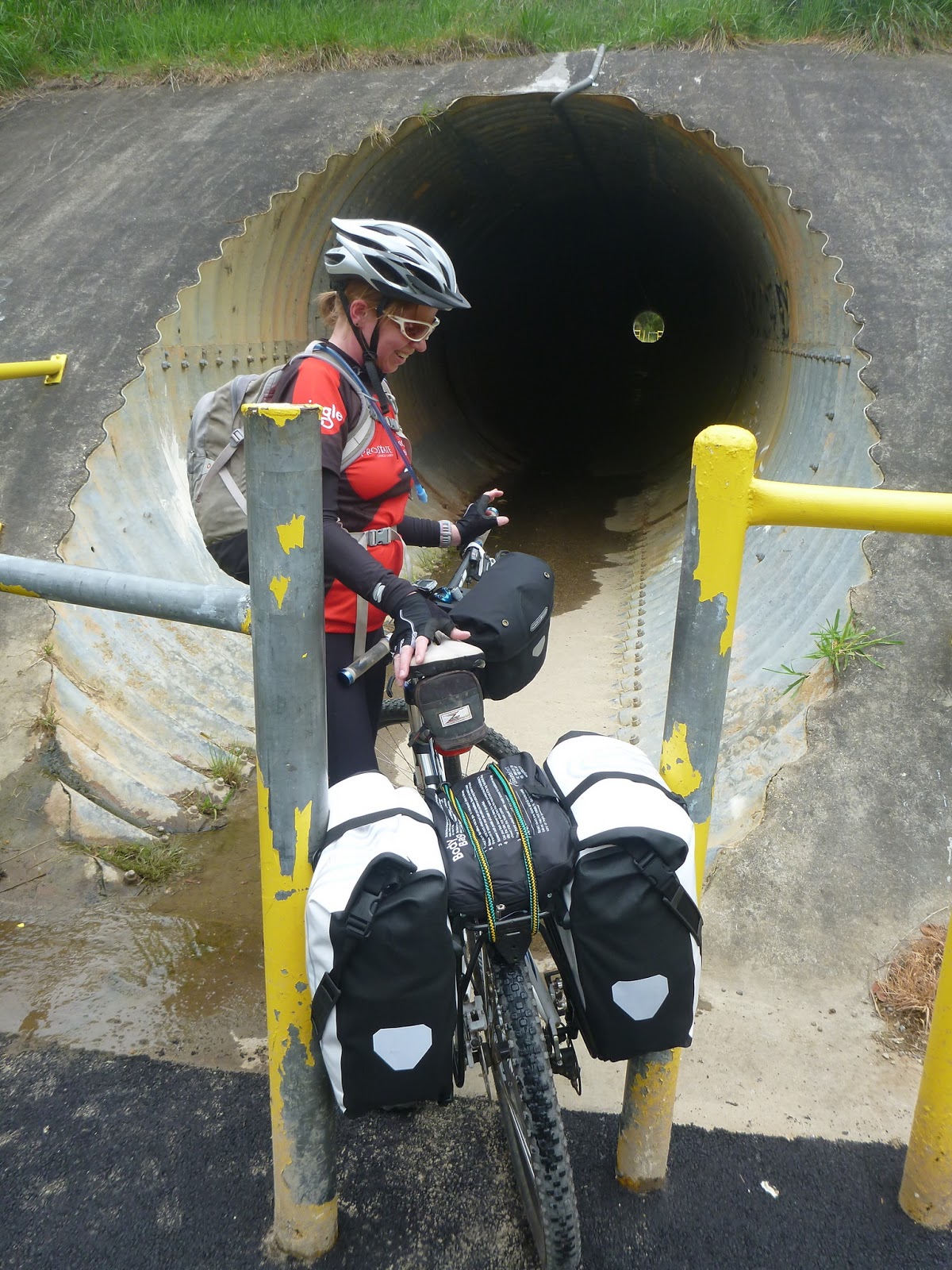 Reason 3: racks don’t do technical bits well … and that means you miss out on some of the best riding.

Reason 4: If you try and ride the technical bits … well sometimes racks break …

Although in this case I think Kim was quite happy when her rack snapped on the third day and I think I got my comeuppance as I had to carry all her gear on my back in a large duffel bag and she got to ride her bike unencumbered into Castlemaine.

So, that’s the problems with using panniers and racks, the question is … are frame bags any better?

My answer is yes, yes and YES.

The extra weight on the handlebars makes it so much easier to get up short, steep hills, but doesn’t interfere with either your forward sighting or balance.  The only time I noticed the bag on the front was when doing tight switchback corners when you could get a bit of extra oscillation from the handlebar bag.  I had no problems getting the front and back wheels over every log I tried and some were 15-20cm in diameter.

Width wise, the bags were narrower than my handlebars, so no problem there and even with a dual suspension mountain bike I was able to fit a small frame bag to carry the heavy stuff which worked really well.

In fact, I only had two small issues.

In the evenings, it was a real hassle to remove the bags, but this was easily gotten around by carrying a very lightweight, foldable bag and at the end of each day I just pulled the clothes and stuff I needed into this bag and left the bike bags where they belonged (that is on the bike).  Kim gets kudos points for bringing the bag in the first place.

By the second day I had also figured out to keep all the stuff I needed during the day in my seat bag and all of the clothes and stuff  I needed at night in the handlebar bag.  This meant I only had to empty one bag each night.

The other issue came about just because of my lack of experience. I tried to put all the heavy items in the frame bag to center the weight … and this included an emergency ration of beans and tuna. 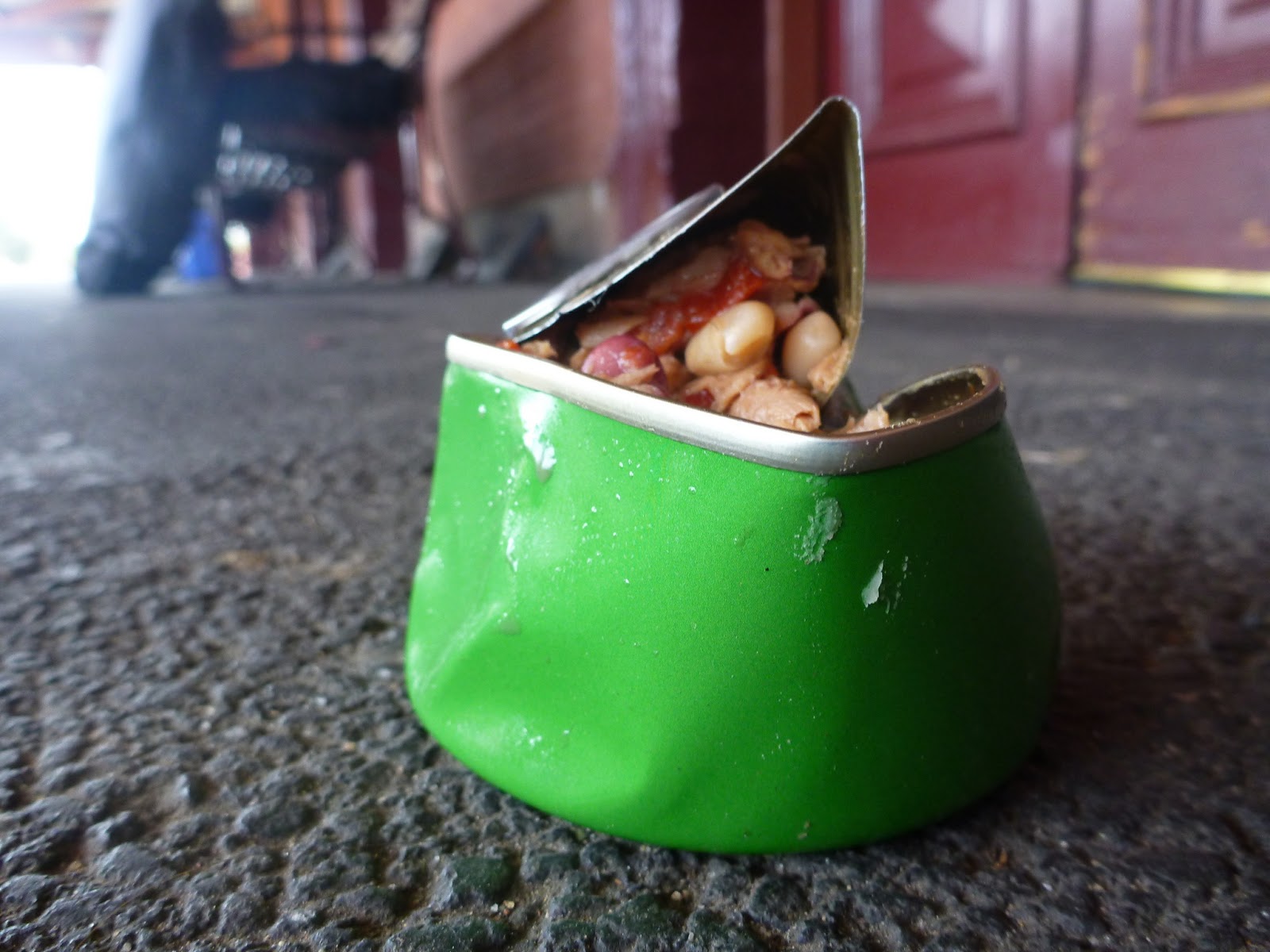 Suffice to say everything in my frame bag now stinks of tuna and beans … Not Yay.

The other thing we learnt from this trip was the benefits of packing light … I took two pairs of cycling shorts and two cycling tops … but got by with just one of each.  Kim on the other hand learnt that she could have perhaps packed a few less toiletries … 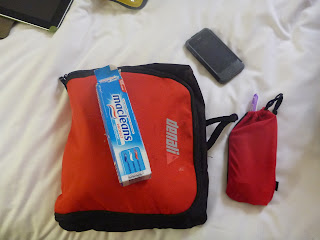 These are our respective toiletry bags… Kim brought a full bottle of shampoo and conditioner, a huge bar of soap and her hairdryer (OK, so I exaggerate slightly) … I brought a toothbrush, floss, disposable shaver and a very small tube of toothpaste.  You can see the difference (and no comments about my iphone and ipad … they were essential and Kim carried the iPad anyway which was probably the only plus for the panniers).

I’ll write more on the actual trip over the next few days, but I’m now a lot more confident that I’ve taken another big step towards bringing off my West Coast Dreaming trip which I’m still planning for the Xmas break … although I’m now thinking maybe I’ll try a bike trailer to carry all that gear over the soft sand …

Ah, it is a joy to ride, but it’s almost as much fun just to dream.