There are some people who love mountain bike parks and familiar trails which they can ride again and again.

Then there’s people like me: I gave up bushwalking because I get frustrated doing the “back” bit of an out and back walk.

In short I want to know what’s around the next corner, not go back and see if I can do the corner I just did a bit better and that, by way of a long introduction, was why Kim and I found ourselves putting our bikes together in Ballarat to go explore a new trail I had come across called the Goldfields Track. 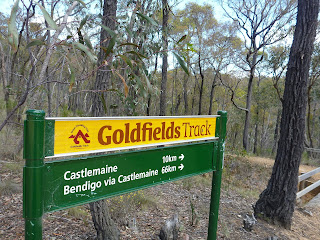 The basics of this track is that it is 210km long (though if you start from Ballarat it’s about 25km shorter), stretches from south of Ballarat to Bendigo and used to be known as the Great Dividing Trail.    It is actually three tracks joined end to end … the Wallaby Track, the Dry Diggings Track and the Leanganook Track, but that won’t affect you very much because it’s all signed as the goldfields track on the ground.

The bit I loved about this track when looking at it as a riding option is that it’s logistically all very easy … from Melbourne airport we just caught the skybus straight to the train station in central Melbourne, then jumped onto a train to Ballarat walked out of the train station and straight into our motel (Reid’s Guest House) and that was that … we were at the start of the track.  (OK, so we may not have got much sleep due to the railway calls all night, but at least it was close).

From there, we had broken the ride up into four days Ballarat to Creswick; Creswick to Daylesford; Daylesford to Castlemaine and Castlemaine to Bendigo where the track finishes at the train station and from there it was straight back to Melbourne using Vline and Skybus again … easy peasy.

To make things even easier, we were able to download the GPS route for free straight from the website (though the Wallaby Track wasn’t there and I had to search through the Garmin data to get the route).

As I say, they made it very easy all around.

However, I do have some cautions and advice:

1. The website promises that you don’t even need a map because every junction is signed.  Of course in reality this is not true.  Although they have done an awesome job signing the trail,  some signs have already been removed and vandalised and you only need to miss one turn to ruin a good ride.  That said, with the GPS route, it is hard to get lost.

2. Buy the walking book (we bought it at the information centre in Ballarat for $29.90 which is two blocks down from where we stayed).  What I didn’t realise is that the walking track and cycling route diverge on several occasions along the track and only the book (not the map) shows these divergences and although the GPS track I downloaded followed the cycling track for the last two days, it followed the walking track for the original Wallaby Track section from Ballarat to Daylesford.  This is a frustration best avoided.  The main lack of signs was where the bike route originally diverged from the walking route.

4. If you come across the free brochure about the track and look at the route profile and see that big climb on the last day just out of Castlemaine … stop stressing.  The MTB route goes around the big hill.  The route profile is for the walking route only.

Actually that’s about it – other than that everything went swimmingly well.

Our first days riding was only a short 25kms or so to Creswick which allowed us the luxury of a lazy (and huge) breakfast at mumz cafe on the main street which had brilliant coffee and hot chocolate but very mediocre food. 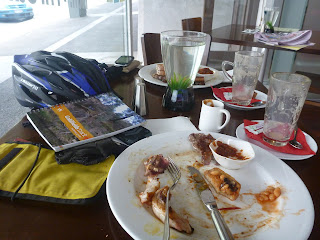 With very full stomachs we finally set off.  The first few kilometres out of Ballarat (once we got off the short road section) was easy riding beside a creek, before crossing under the highway through a dark culvert. 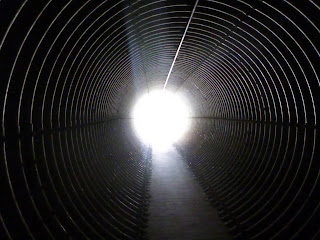 We soon found ourselves going up and down gully’s and through a maze of bush tracks, single track and along water races, but in the main the riding was just good fun easy bush riding … well if you weren’t carrying two heavy panniers on the back of your bike. 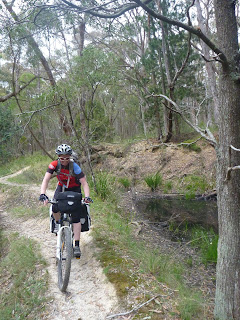 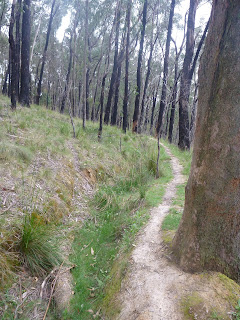 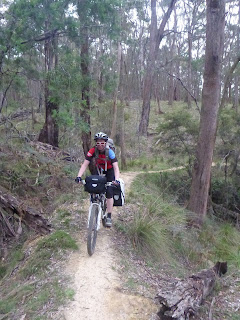 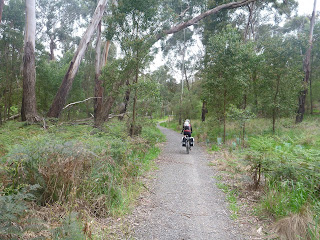 Our only problem was when we came out at a spot to find that the track was closed to cyclists (this was before we realised there was alternate cycling routes which in this case weren’t signed but were in the book) but we managed to find our way forward anyway just using my GPS.

After a late start we still managed to pull into Creswick by 2pm just as the skies opened – perfect timing.  We stayed at the American Hotel (we had pre-booked all of our accommodation) and we were the only one’s staying there, but it was still a great choice.  Nice quiet room with a big comfy bed.  They had a shed out the back we could lock our bikes in and they did a great dinner.

The rest of Creswick though … well it could do with some maintenance …. 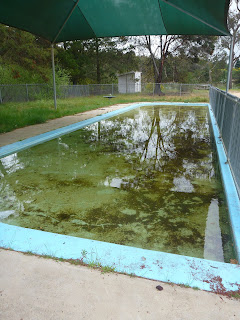 That said, we were both glad we had opted for the ‘easy’ first day (in Kim’s word she would have cried if we had had to cycle all the way to Daylesford on the first day) and all up it was a lovely way to spend our first anniversary.