Mostly my attitude of just giving things a go works.

Yes things could work a lot better if I did train and if I did plan, but what that misses is that life can’t be an adventure if you plan all the unknowns away … and I want my life to be an adventure.

The problem with this philosophy is the assumption that things will still go well despite the lack of planning, ignoring the reality that sometimes adventures go badly and they aren’t fun at all.

A few hundred metres into my first 10km leg of the Bluff to Bluff paddle race, I emphatically believed that today was going to be one of those days where it wasn’t going to be fun.  In fact I felt so bad that I seriously considered just pulling into shore and DNFing.

The only reason I continued at that point was because I knew Stephan and George needed me to get through at least one race leg so they could then also race. Put simply my survival percentages were slightly higher if I stayed in my boat than if I went ashore.

I should probably back up a step here and explain that the Bluff to Bluff is a brand new paddle race in Tasmania (put on by the Cradle Coast Outrigger Club) which consists of a 70km paddle between Wynyard and Devonport broken up into 7 relay legs… five of which are approximately 10kms and 2 of which are 5kms.  It had to be done in teams of at least two people, and each paddler could only do a certain amount of legs, so in a three person team no person was allowed to do more than three legs and hence my need to complete at least one leg.

This being the inaugural year, entry numbers weren’t high with only 9 teams entered.  The upside of this was that if we could get to the end of the race we were guaranteed a top ten finish … which would probably be the best I would ever come in a ski race in my life.

So anyway, I’m less than a kilometre into this race, I’m struggling to fight off a building nausea, breathing in deeply to try and get some, any, oxygen from out of my gasping lungs and into my screaming arms and all I could do is watch as the other eight teams pulled further and further ahead of me. I knew that for the first time in my life I was about to come last. Dead last.

I tried to put in a sprint to catch the boat that was just five metres in front of me, but I discovered that while you can make many parts of your body hurt more and pay more, you can’t do that with your lungs. If you can’t get enough oxygen into your lungs then there’s a limit, a hard limit, to what you can do.

And so the other teams pulled further and further away.

Yep, my first leg was a disaster.  I finished smack on the cut off time for the leg (20 minutes after the first paddler arrives) and about 2-3 minutes behind the next slowest paddlers.  My main problem was that I couldn’t do any sprints to get onto and use the small waves that were out there because everytime I lifted my heart rate I found myself coughing and spluttering for air, so I just had to slog it all the way down the coast doing way more work than I needed too.

However, all the other competitors seemed to be there as much to have a good day as to race and so I got a bit of a standing ovation as I ran the 150 metres up the beach (it would have to be low tide wouldn’t it) and under the timing tent to hand over to Stephan for leg two. 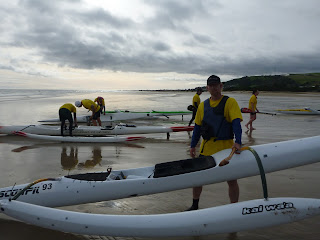 Each leg was a mass start, which was good as it meant that each of us could have a real race (not just get further and further behind) and I think both Steph and George had enjoyable paddles for their first legs.

My second leg was only meant to be a 4.2km super sprint, although my GPS showed it to be closer to a five kilometre paddle as I had to go out around some reefs.

The wind had picked up for this leg and there were some great running waves and tricky swells to play with, and of course I got into some trouble because I had no one to show me the way and so ended up coming too close to a reef and getting picked up by a breaking wave and almost got smashed onto the reef just missing it at the last second.  I was also pretty excited on this leg as I felt a little bit better and was actually coming second last (not last) … until the rear safety boat showed the ladies team that was behind me where the gap in the reef was so they could take a big shortcut.  Fortunately I managed to pick up a big wave and still just managed to beat them onto the beach. 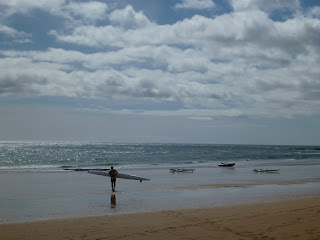 My final leg was a 4.8km paddle and after my last leg I was feeling pretty confident, despite the weather really picking up.  This of course was a fools confidence.  The wind had  turned more North Westerly and the swell had really picked up and I soon found myself battling over 1-2 metre sea and swells thinking “Oh, oh here we go”. 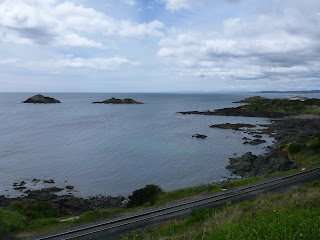 But, despite several close calls I somehow managed to make it through the leg and was very happy to again come second last, just keeping my nose in front of the ladies in the OC2 category.  Unfortunately our times somehow got transposed, and so I will take the official honour of being the slowest paddler in the race …

Overall, we finished 7th (we beat one team and another team DNF’d because of a broken rudder on the last leg), but that’s not what I’ll remember from the race.  I’ll remember the beautiful coastline, the great bunch of friendly people, the amazing organisation, great food and snacks and overall what was an outstanding event .

Next year I’ll be back, I won’t be fighting off a flu and I’ll train and be fit …

Who am I kidding.  Yes, I’ll be back, but I’ll probably make the same mistakes I did this year and just like it did today … it will all work out fine.