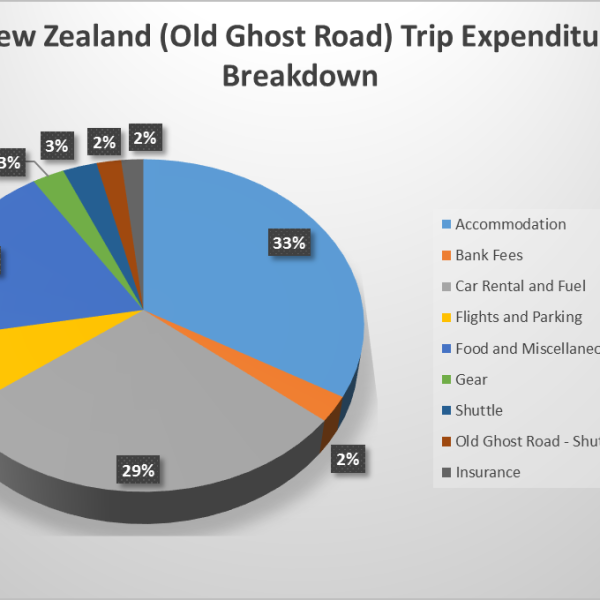 As most people who know me well will attest, I am rather obsessed with validating things that don’t make sense to me, and I’m also rather unafraid to call out what I think is bullsh*t when I see or hear it.

So back in 2012 I started documenting and reporting on my expenditure on cycling holidays, because a number of the reports that were published on cycling expenditure seemed like the proverbial bullsh*t to me and so I wanted to validate them.

Since that time I’ve looked at my expenditure on European Holidays and event holidays, and I’m willing to admit that I’ve been surprised by how much I do spend on holidays and that it seems that the overall quantum of expenditure (if I am anything to go by) that I’ve seen in reports isn’t unreasonable, although I’m still struggling to get close to the requisite spend of $123 per person per day on food.

Not wanting to break with tradition, I’ve just been back through my accounts on my latest little soujourn to New Zealand to ride the Old Ghost Road and I’ve totaled up all my expenditures and come up with some data on how much my last minute decision to head there cost.

Turns out the total cost was $2,686 (yes I am really that detail oriented which is why people will always seek to avoid me in the hallways) for a total of 8 days (and 2 part days) or 9 nights in New Zealand.  That’s $335 per day.

Now this is actually cheaper that it should have been as I ended up booking the flights with my last Virgin Australia points, saving about $800 in airfares, and I also haven’t included the cost of the new bike I bought to go on the trip as that would sort of overwhelm everything else (and will hopefully last a bit longer than the short time it was used over there).

So with those caveats, where did the money go … well I’m glad you asked. 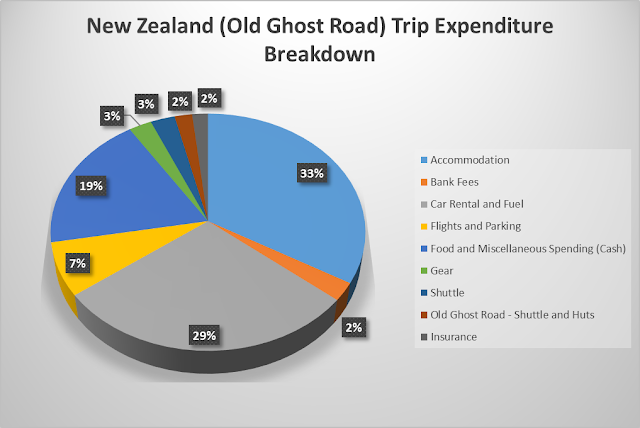 The two largest expenses were Accommodation (33%) and Car Rental and Fuel (29%) followed by Food and Miscellaneous Spending (19%) then lots of little stuff.

Flights and Parking were only a small part (7%) of my expenditure because all I had to pay was the $110 for my bike ($55 each way) and long term parking near the airport.

You’ll note that my food expenditure was a paltry $63 a day, only half the average of a normal cyslist (and I really do try and spend a lot of money on food).

Probably the more interesting graph is this one: 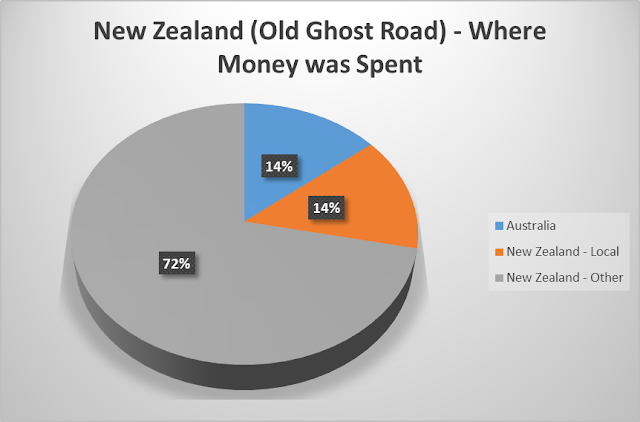 This graph breaks my expenditure down into what I spent in Australia and what I spent in New Zealand, and more specifically how much I actually spent in the region of the Old Ghost Trail (the logic being that it is the region which has built this great attraction which pulled me to New Zealand, so how much of my direct spend did they actually receive through accommodation, food, track fees, shuttles etc.).

The answer is pretty sad for cycle tourism:  Although I spent 86% of my total holiday spend in New Zealand, only 14% ($380) of my total spend was actually spent in the local region.

So, take home story – if you want to capitalise on mountain biking toursim.  Let someone else build the trails nearby, and then offer accommodation or something else for the riders to do nearby that they can spend lots of money on.

Or more seriously, maybe it’s time to start thinking about paying for the trail we ride on.  I mean it just seems weird that I pay $85 to park my car at the airport for a week, but I only pay $55 for two nights in huts and the opportunity to ride the Old Ghost Trail, right?