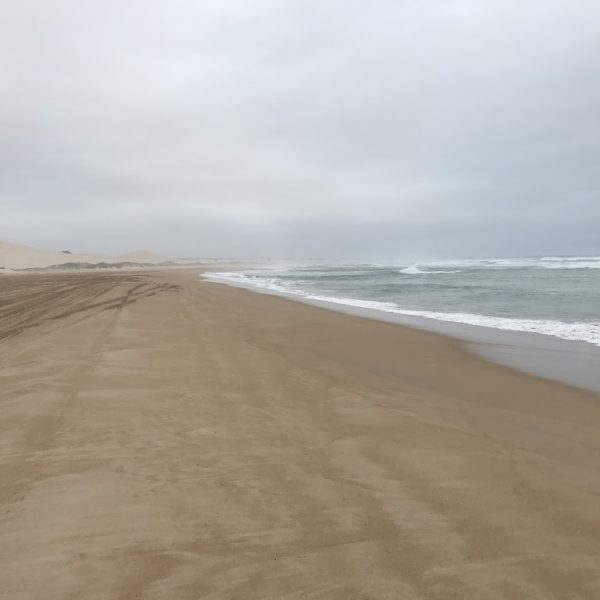 You know that moment in Forrest Gump when Forrest stops running after having criss-crossed the continent several times.  The moment when he turns back to those following him and says something like “I think I’ve had enough … I think I’ll go home now“.

Well I had that moment (albeit on a much less grander scale) as I was pushing my bike along Sandy Cape Beach today.

I was about 2kms down the beach, and I’d been pushing my bike for the last 500 metres of that distance, and it was slow, slow going.

The reason I was pushing my bike was because the only part of the beach I had found that was hard enough to ride on (even with 29×3 inch wide tyres) was the area inside the back wash of the waves.

So I’d been riding in this wet zone to start with, when I’d been slammed by a set of monster waves, literally washed off bike, and after recovering from that little incident (soaked from head to toe) I was suddenly a lot less keen to try my luck with that riding tactic again …

So I was pushing my bike along, in my own world, thinking about whether I really wanted to push my bike for another 7kms down, and 7kms back up this beach when a four wheel drive pulled up beside me.

“You’ve picked a hard way to get down here“, the driver chuckled.

“You’re the guy from tassie trails aren’t you?“

“So, does the sand get any harder as you make your way down the beach“, I asked (some may say pleaded”.

“Nope“, my new friend said … before driving off.

And that was the beginning of the end of my hope. 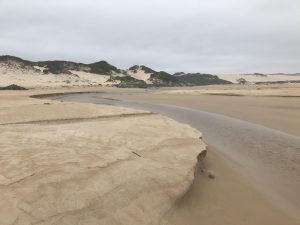 I pushed and rode another 500 metres or so (just beyond Daisy River) as I watched the vehicle move further and further (and further) down the beach until it was just a small black dot in the haze.

My pace was woefully slow through the soft sand and as much as I really wanted to get to Sandy Cape, I think I knew deep down inside that today wasn’t going to be the day, because that’s when I stopped, stood there watching the vehicle fade into the haze, and I realised I didn’t want to go on – I didn’t want to push my bike that far.

That’s when I turned my bike around and started to head home.

To be honest, if I rewind in time a bit, the Sandy Cape Track had probably become too big a prize in my mind for me to really enjoy actually being there.  I’d wanted to ride this track for years, in fact I’d tried to ride it years ago only to be thwarted by a split tyre six or so kilometres north of the Pieman River.

This route was part of a long distance fantasy route I’ve had in my head for years.  A trail that connects together a winding network of wild tracks from one end of Tasmania to the other, and this was a key section of that trail, and it had to be good.

I’d emailed someone else who had ridden it, and they had described being blown from the Pieman River to Arthur River in a day while barely having to turn a pedal as the wind pushed them along, but that wasn’t my experience today.

I’d set off from Temma, heading south, and the first 10 kilometres of the route was an undulating inland track with a surface that went from super soft sand to fun rocky trail.  I’m not sure how much of the surface condition was a result fo what would have been heavy easter traffic the week before.

It was OK to ride, but having ridden the southern section around the Pieman River and coastal sections around Arthur River, the riding and scenic outlook along this section just didn’t compare. 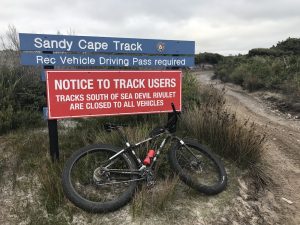 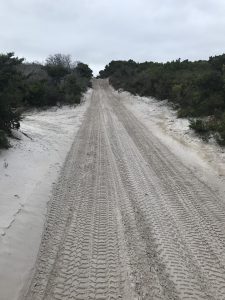 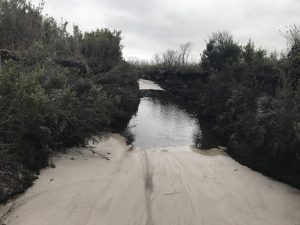 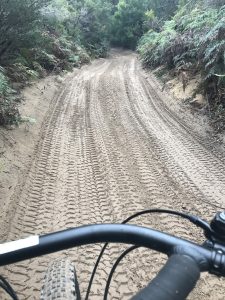 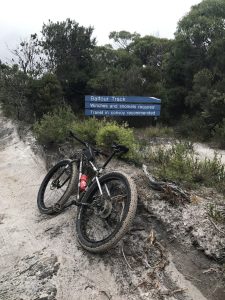 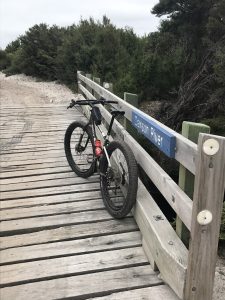 But then just past 10 kilometres, the track descends down onto the coastline and the next four and a half kilometres were the sort of west coast riding that I was expecting … wild, wind swept tracks and hard packed beaches with the surf pounding in … I was in heaven. 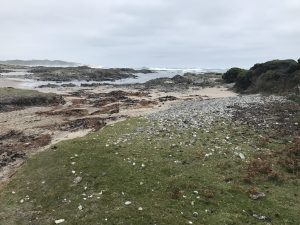 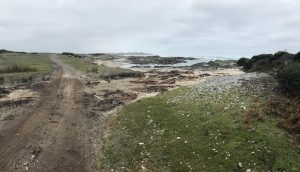 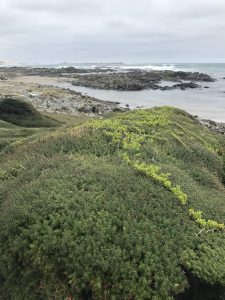 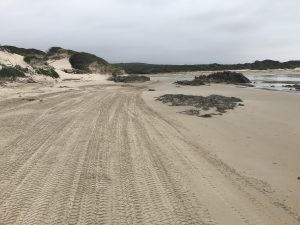 Then, at about 14.5kms from the trail head, the track heads out onto Sandy Cape Beach, where I expected the same fun riding I’d experienced on the two shorter beaches I’d just been along, but it was not to be. 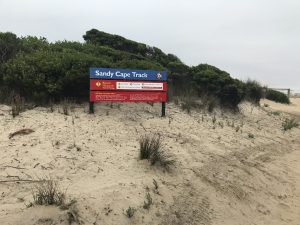 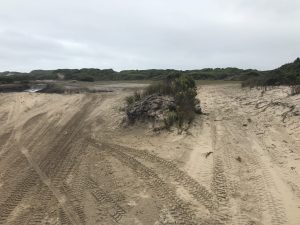 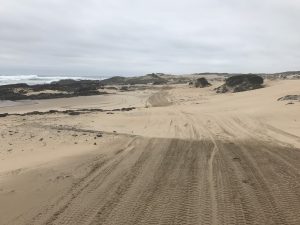 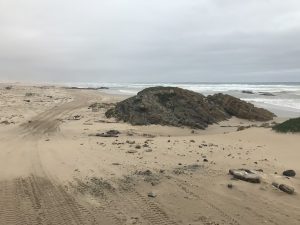 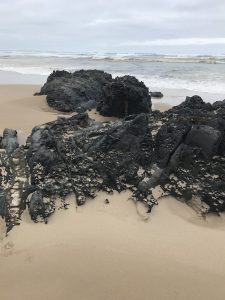 I think I am becoming soft and lazy in my middle age, as really I should have carried on from the point that I’d got to.  I mean it is a six hour drive from my place to Temma so maybe I should have invested the extra 4 or 5 hours it would have taken me (at the pace I was pushing my bike) to get down to Sandy Cape, but the enthusiasm for the walk just wasn’t there.

Believe it or not, I do, mainly, ride my bike to enjoy myself.

The ride back seemed to go a lot quicker than the ride in (I sort of sussed out how to time riding inside the waves on the way back along the beach and there was a slight tailwind on the way back) and the advice I’d received from numerous sources to avoid riding this trail due to the heavy 4WD traffic, while true in one way (I did pass quite a few vehicles – maybe 10 or 12 – in the time I was out there) was mainly wrong – the vehicles I met didn’t detract at all from the ride and in fact all the other trail users were friendly and pleasant, and like me just seemed to be out there wanting to enjoy themselves in a remote place. 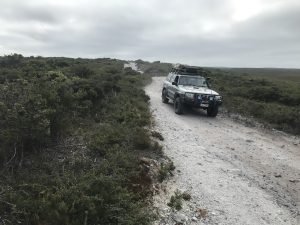 Overall I was disappointed by this ride – it just didn’t meet any of my (extremely high) expectations and is no where near as enjoyable (on a bike) as the sections of coast north of Temma or South of the Pieman River.

But, still … there’s a bit of me that really, really wants to ride (walk) to Sandy Cape.

Maybe it’s time to dust off that motorcycle licence of mine … or maybe I might just go back and try it at another time of the year.