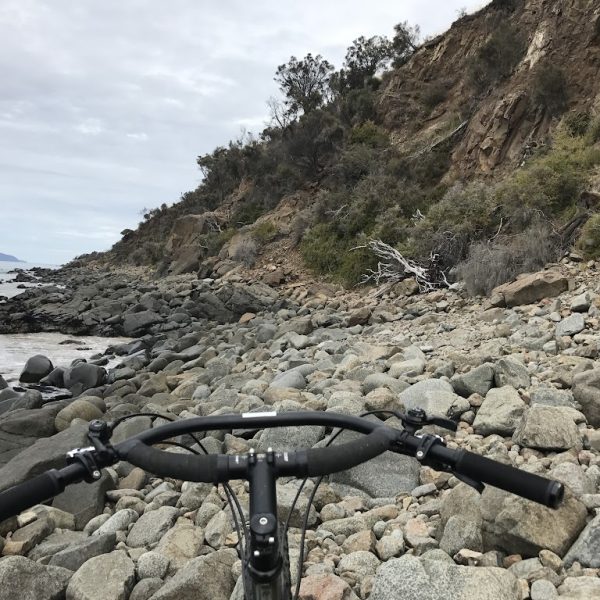 There are many moments when I think “And I’m doing this … why?“ 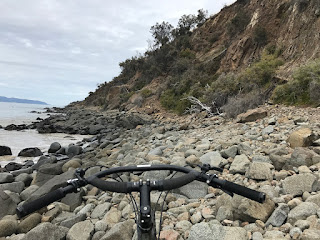 And then there’s moments when I think “Uhm … this is actually getting a little scary now … I could be on my way to being awarded a Darwin Award“.

I had one of those moments about 5 minutes after taking the shot below and sending Kim a text that basically said “this isn’t easy“. 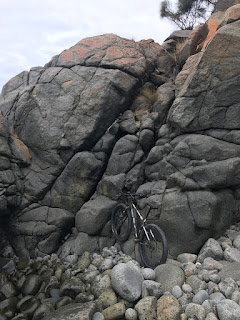 As it turned out, carrying my bike up to the top of that rock was hard, but not overly technical or worrying.  The problem was that once at the top, there was no way to get back down the other side and so I had to push, climb, heave and throw myself, and my bike, up an even steeper, muddier cliff that felt like it was crumbling away beneath my feet.

That was my moment when I thought I might be about to receive a Darwin Award.

Way, way, way, way, way back in the mists of time, not long after I first started this blog, I managed to break my knee at a ghost tour at Port Arthur and so spent three months sitting on a couch, injecting myself with warfarin for a blood clot in my leg, and unable to get up off the couch without assistance.

This had a sort of silver lining, because with nothing else to do, I started to teach myself a bit of web stuff and launched the first version of www.tassietrails.org which is why I am typing this and you are reading it now.

While sitting on the couch reading reports on mountain biking, I stumbled across a draft mountain bike plan which indicated that they were looking at building a route from Lauderdale to Cremorne.

This was very exciting to me, and so my first foray back into walking was to try and walk this route.  You can read about that here.

That was back in 2011, and although since then I have discovered, and regularly ride the May’s Beach route from the end of Bayside Drive, and I have even been out and explored the trails around Calvert’s Hill, I have never come back and tried to ride the whole route.

There is a  reason for this: between Calvert’s Hill and May’s Beach there is a big private property with a sign on it saying “Private Property – No Trespassing above the average high water mark”.

But then I was out walking the dogs around May’s beach a few months ago, and I saw this track (well foot-pad really) heading off around May’s Point and this prompted a return visit on my bike where I found, after a lot of pushing and carrying, that the trail (foot pad) actually goes all the way around to where the surfers et al make their way down onto the surf break near Lauderdale Beach.

This got me thinking about the Lauderdale to Cremorne route again and so I went back to ListMap, and overlaid the land tenure image over that private property and noticed two things:

So today, knowing that this may actually be possible, I set off (at around low tide) to see if I could finally ride the route from Lauderdale to Cremorne. 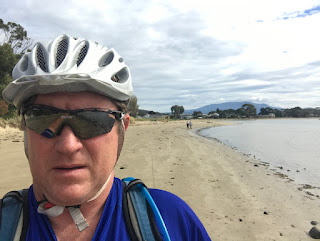 I was a bit worried about being able to get onto the footpad around May’s Point (having been unable to get around the rocks on a previous visit at high tide) but the riding was actually so easy that I rode right past it on the beach and had to backtrack. 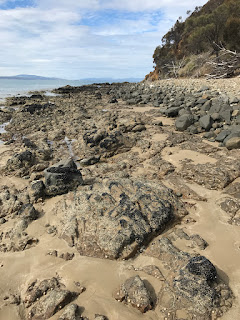 Now I do want to stress at this point that the footpad around to May’s Beach is narrow, it goes right above several cliffs, it is steep and rooty and you end up carrying / pushing your bike around about 75% of it, so if riding to May’s beach stick to the road and go that way.  I just went this way as I wanted it to be a full traverse.

Once onto May’s Beach things got easy again until I got to the boundary of the property with the “No Trespassing” signs.  This is where I took a left down what looked like a likely track and plunged down a very steep track to the coast. 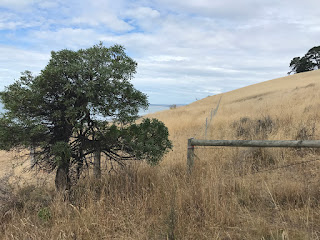 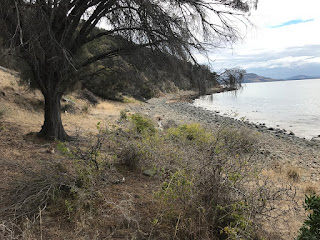 And, if you ever ride/walk down this track you’ll know how happy I was to see that listmap seemed to be right and there was a reserve below the property.

Even more joyously – there was a track … of sorts 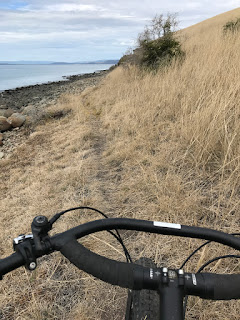 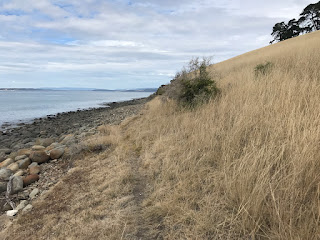 well, there was a track for about 50 metres and then (trying to be good) when the track petered out, I headed down onto the coast and proceeded to try and follow the ‘average high water mark’ (there did seem to be another track heading along the coastal side of the fence). 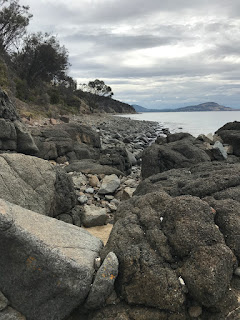 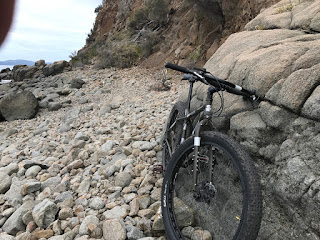 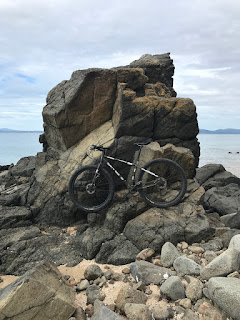 Now some will say this is stupid, but I came here to explore, and I expected this section to be a long, slow haul across the rocks and so I was perfectly happy trundling along with my bike on my shoulder as I jumped from one rock to another, but I accept that there will be many others not so willing or eager.

Eventually the coast got harder to navigate as I came to a rocky point (you can see it on Google Earth and I expected this section to be a challenge).  After going through a cool crack in the rocks I came to the big rock at the start of this post, and realising there was no way forward (and being too lazy to go all the way back), I just went up the cliff face.

I would strongly, emphatically and totally NOT recommend going up the cliff face.  In fact, with hindsight I should have just jumped in the water and walked around the rock – it didn’t look that deep at low tide.

After a few heart in stomach moments, I finally got to the top, and from there I got onto the track which runs below the fence (which I am assuming is the break between the private property and the council reserve). 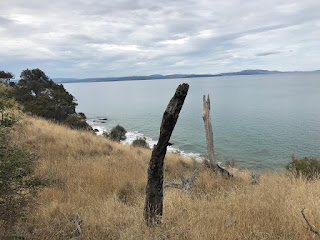 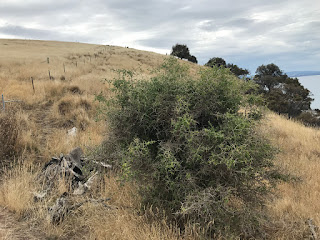 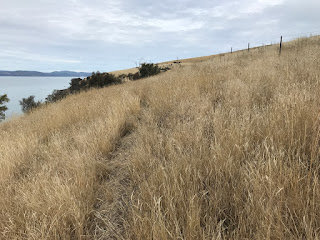 It’s not much of a track, but was mainly rideable on my Surly ECR.  With that said,  I have to confess I was pretty happy when I got to the fence marking the boundary with Calverts Hill Reserve, got over it, and knew that there definitely was a way out from here … 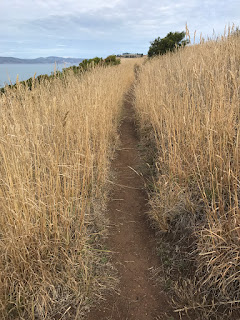 And that was that.  I had a nice ride around the beach once at Cremorne and then just followed sections of the Tangara Trail back to Lauderdale.

It took me nearly six years to finally get from one end to the other, and I wouldn’t really recommend this route as it stands to anyone else, but having ridden it now, I could see that with some track work and a bit of re-routing, this trail could become a brilliant part of the Tanagara Trail network allowing for an amazing circuit around the area.

Maybe in another seven years …