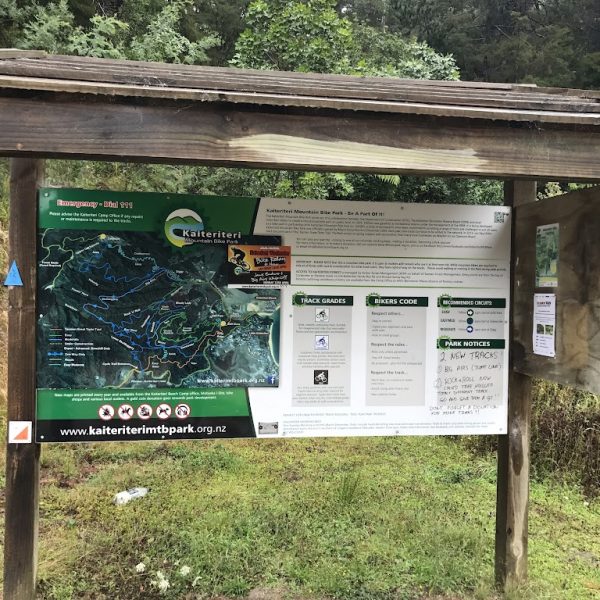 Without actually knowing why, I’ve wanted to ride the Kaiteriteri MTB Park ever since I picked up a brochure on the Abel Tasman area when Kim and I were over here walking the Milford Sound track and I saw the little advert for the MTB park. 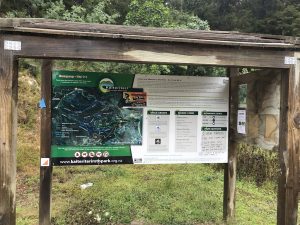 I honestly think I just liked the idea of coming here for a week or two, riding Kaiteriteri, the Heaphy Track and the Old Ghost Road … it just sounded like a cool holiday.

So, here I was just 20kms from the MTB Park and part of me really wanted to go and ride them, but there was a problem.

More specifically: it was bucketing down.

So I drove around to Kaiteriteri from my hotel trying to convince myself that I wanted to climb into my smelly, wet cycling clothes (the one’s I’d worn for three days on the Old Ghost Road and had then left out in the rain overnight) and go riding.

But, being honest with myself, I really didn’t want to do that at all.

I wanted to stay dry and warm and clean.

I was half motivated by the runners I saw out in the elements slogging up and down a big hill in the rain, but that motivation quickly wore off, and by the time I pulled into Kaiteriteri itself and had to make that decision to open the car door and step out into the rain, well the motivation had completely gone.

Instead I drove back out to Motueka, 20kms down the road, where I found a nice little french cafe where I had a lovely omelette and coffee for breakfast as I watched the rain come down.

I think I may even have decided to continue on to Nelson if, just as I was finishing my omelette, a bunch of kids hadn’t cycled past, clothes pasted to their bodies from the rain, but smiles emanating from their faces saying “I am alive.”

And I knew that was the look I wanted in my face too.

So, I walked back out to my car, did a U turn, and drove the 15 minutes back down the road to Kaiteriteri and this time I opened the car door, stepped out into the rain … and went for a ride. 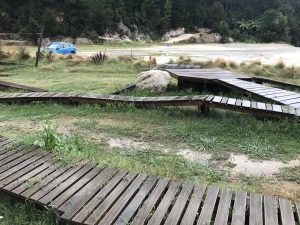 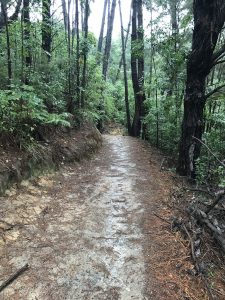 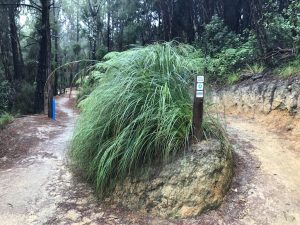 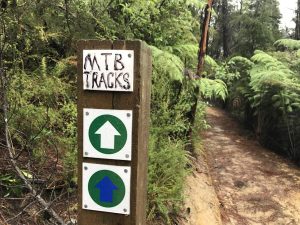 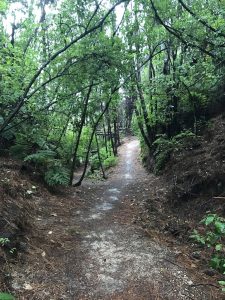 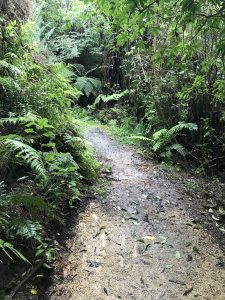 Needless to say I pretty much had the trails to myself, although I did run into a mum and her young kid out for a ride, and an (initially) rather annoyed trail angel who responded to my plea of “Uhm … I seem to be a bit lost, can you tell me how to get out of here?” with the response “We don’t help people that ride our trails in the rain“.

Which, I have to agree, is a perfectly reasonable response.

To his credit, once I explained that I’d flown over from Tassie to ride the old ghost trail and that I had just detoured up here for a day to ride this trail before heading back to Christchurch, he cut me some slack and we had a good natter before he gave me a few options for getting back to my car.

The trails themselves are pretty darn fun, though I couldn’t rightly tell you most of the trails I rode on other than the Corkscrew, Jaws and some of Skull Duggery as I was pretty much lost the whole time. 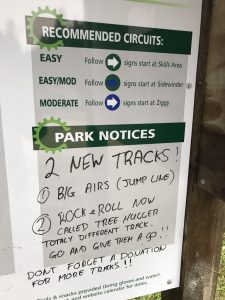 And that was the plan, but I wasn’t able to follow the route, and so I just sort of guessed my way around … until I got lost, or at least accepted that I was lost.  I think I was lost from the very start.

All up, it was a great place to ride, even in the rain, and definitely worth a detour.

For me (writing this several weeks later) I’m just so glad that I put in the effort to step out into the rain and ride.

Despite the extra time spent cleaning and polishing my bike to put it back on the plane to Australia, I’m glad I rode the trail … because I got to have that “I am alive” smile on my face too.

And that is always worth the effort.