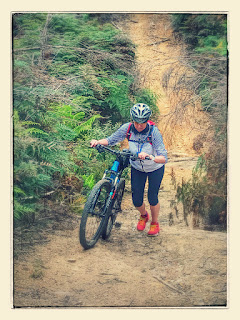 Specifically, she’s gone nuts thinking she can run (like, with her own feet) 100kms.

Even more specifically, she’s thinking of running 101kms in the Gone Nuts101 trail race in February next year.

However there is an upside to her craziness – she wanted to scout the course before she ran it, so we had to go up north for a few days and ride/walk unknown and unexplored trails …

I know: it is hard to be a supportive boyfriend in these modern times, but I acquiesced to her demands, and agreed to spend three days up north staying in a luxury B&B in Stanley and riding beaches, hills, and trails – all so she had some idea of the course ahead of her on race day. 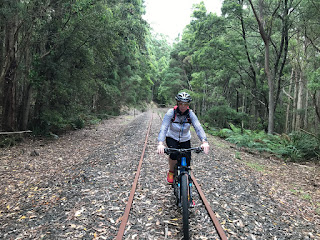 At least that was the plan when we left Hobart.

Somewhere around the 40 to 45km mark on the course, that story had changed to her deciding that there was zero chance of her ever wanting to even enter the gone nuts race, and that the course director must have been some sort of masochist.

That was around about here somewhere … 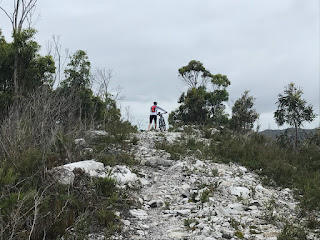 Which was just after we’d got to the top of yet another impossible climb only to see more impossible descent/ascent combinations stretch out in front of us.

But I get ahead (way ahead) of myself, so let’s go back to the beginning.

The plan was to spend three days scouting different sections of the course staying at the rather nice looking “On the Terrace” B&B in Stanley.

It was a good plan.

But then I got a call on December 23 from said accommodation to tell us that they had ‘mucked up’ our booking and so we had no where to stay (read that someone with a longer five day booking needed our room and so they were unbooking us, despite having confirmed our booking through booking.com and there being no where else in Stanley for us to stay) .

The owner didn’t even apologise or offer any alternatives, and in fact their whole conversation was about how hard it was for them as a small business managing their three rooms, and how I should feel sorry for them.

And here’s an interesting fact: if the B&B owner unbooks you from your booking on booking.com, because you therefore have no booking with them ,you can’t leave a review voicing your displeasure, even though they shafted you.

Booking.com, to their partial credit, offered me a refund on any extra costs I had in booking replacement accommodation, but I say ‘partial credit’ because they only made this offer after I had already booked alternative (much cheaper) accommodation through them (one night in Stanley and one night in Wynyard which was the next closest available accommodation) and so they would have known that I had no additional costs.

The second problem was the weather: the plan was to just drive up the first day, and then spend the next two days exploring the trails, but the forecast for our two main days of trail exploration deteriorated to 20mm to 40mm of rain per day, so we rejigged our plans and decided we’d push up to Stanley early on the first day and try and get the main inland section (the section from Black River to Rocky Cape or about km 17 to km 54) of the race out of the way before the rain came in.

So we arrived at Black River around 1pm, and after a bit of confused exploration trying to find the route (feeling like we were riding down someone’s driveway) we finally set off to see what we would see … 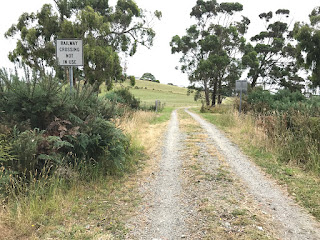 After the little driveway experience, we popped out on a road, and after a quick check of my map I told Kim that “it was all easy from here” and that it looked like we just follow this road until we got to the first checkpoint.

Turns out that this was to be the first of many times that I would be wrong today.

A kilometer or so down the road, this road (that we’d just follow) ended and after another, closer, check of the route it appeared it was time to jump on the (now closed) railway line – literally. 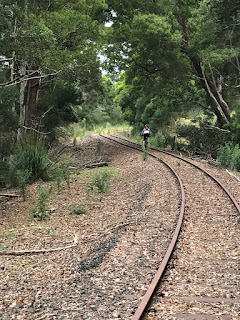 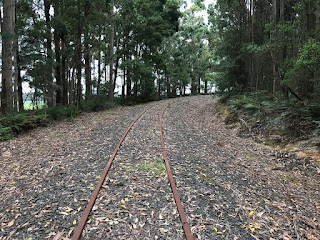 It was a bit bumpy on the bikes, and a few too many thistles, but in the main it was an enjoyable little section of trail, though running it could be interesting.

All too soon (though I don’t remember thinking that at the time) we headed off the railway line and followed a parallel road out to what would be the first checkpoint at 25kms.

From there, we were a bit worried we’d need to leave the course as the google earth imagery seemed to indicate that the course went through someone’s house, however the trail does actually follow a road around the side of the house and off into the bush – it just doesn’t feel like you’re on a road as you ride along it.

It was actually a really nice section of trail – to start with – but then it all got a bit monotonous with quite a lot of undulating climbs through less than spectacular harvested forest areas. 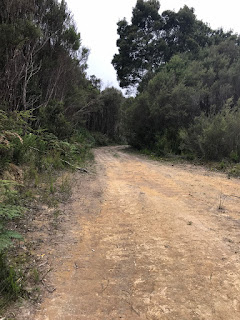 Kim also got ‘attacked’ by a bull (I think it actually just stood up and looked at her the wrong way as we cycled past, but she swears she was attacked due to her red backpack and orange shoes and that as her boyfriend I should have thrown myself in its way).

At least that’s what I think she meant as she went pelting past me at a thousand miles an hour yelling “bull – the bull’s charging me – bull! bull!  BULL!!!!”.

Even with that exciting interlude, both of us agreed that these forestry roads weren’t what we were expecting at all from the course, and hence we were very grateful when at about kilometre 39 (if you were running the course) we found the track heading off onto a very unpromising little track  … 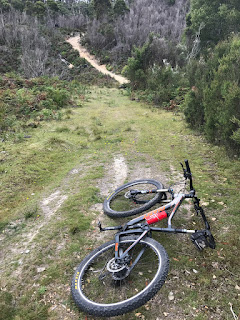 Turns out it was far more promising than it looked.

The next kilometre and a half were a hoot, with several little stream crossing, lovely forest and even a nice collapsed bridge crossing which we both rode across …

Despite what looked like a very steep hill in front of us just after this bridge, we were both agreed that these were the sort of trails we were expecting, and with my confident assurance to Kim that we just had to get to the top of this little hill and it would all be downhill from there to Rocky Cape we happily set off for a bit of a push …

Now I will say at this point that I got the elevation profile / distance progressed a bit wrong, so whereas I thought we were heading over the crest of the ‘big hill’ we were in fact just setting off into the foothills.

Remember how I mentioned earlier on that I got quite a few things wrong?  Well most off them were my optimistic exhortations to Kim over the next five kilometers as I promised “once we get to the top of this hill / around this corner we’ll be on a proper road and it will be all downhill”.

In case any prospective gone nuts runners read this, be warned that I was very wrong and the next five kilometres are a mix of leg, ankle and heart breaking ascents and descents and tree fall. 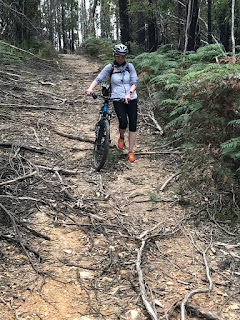 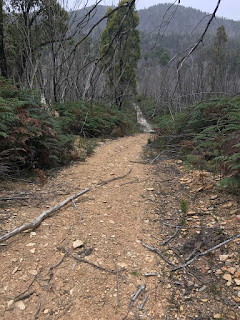 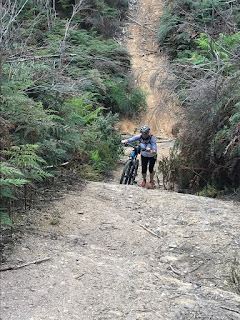 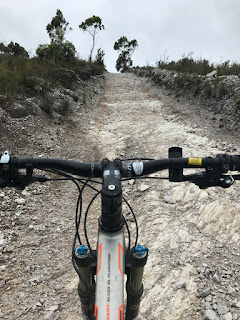 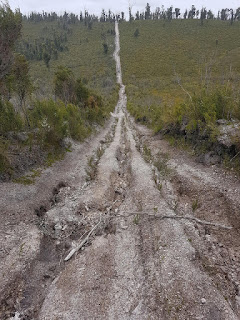 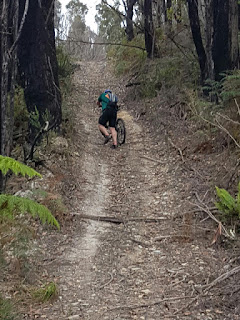 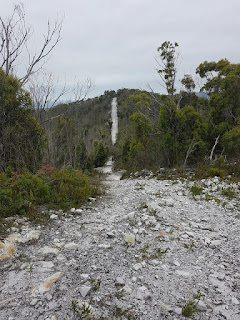 Admittedly our little adventure through this section was made much harder with the bikes.

Still, it was here, having slipped in a rut and had her bike land on top of her whilst pushing up a hill and then finding herself unable to get back up (for once I was actually a good boyfriend and headed back down and helped rather than just being my usual self and laughing whilst taking a photo) that Kim started saying that there was no way she was doing the 100km race.

She even accused me of perhaps going off course, which I hotly denied (after checking of course).

It wasn’t a fun section, even the last descent was so steep that Kim couldn’t stand properly (in her new trail running shoes bought specifically for this event), so I found myself hauling both bikes down the side of the hill (in my $89 shimano bike shoes).  Go the cheapo shoes!

But we finally got to the bottom of the steep bit, and then after we pushed and lifted our bikes over another kilometre or so of fallen debris … 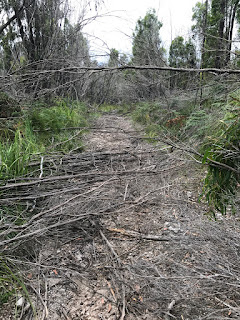 We finally emerged out onto what looked like a real road and felt that relief you get when you know you’re actually going to make it through … and in this moment of joy, I promptly took off the wrong way for about a kilometre before I realised my error and had us backtrack.

Really not what either of us needed at that point.

But that was it … once back on the right track,  it was a fairly easy cruise out to the highway (at this point Kim was so convinced that she was not going to do the 100km run that we didn’t even bother following the last section into the campground) and after a quick refill of cold cokes and gummy snakes at the United Petroleum place a couple of kilometres up the road, we killed the last 12 kms along the highway back to our car due to a nice 30-40km/hr tailwind pushing us along.

We thought it would take us 3 or 4 hours to scout the course, but I think it ended up taking closer to 5 hours (including the ride back to the car) and we were both feeling a bit scratched and beat up from the days adventure.

Just over an hour later we were, however, happily showered, in clean clothes and munching on fresh seafood in Stanley (we did manage to find a nice luxury B&B in Stanley, but just for one night The Ark Stanley which gets a 9.9/10 from me).

It was here that we reviewed the day with a bit more distance between us and the unexpected steepness of the trail, but despite that distance Kim just got more and more certain that she was now only going to do the 50km run.

This may have proven that Kim was in fact not nuts, but it left us with another problem – we now had two days left up here in the North West and as we no longer needed to scout the first section of the race we didn’t really have much else to do other than check out the section through Rocky Cape to Boat Harbour.

As I looked out the window pondering what to do with all our time, it started to rain …

And that’s where I’ll pick up in the next post.