I am an “early to bed, early to rise” type of rambler, and hence midnight to me is a good time to be tucked up in bed with many hours of sleep already under my belt.

Which raises the question … how the heck did I find myself lining up at the start of a 70km ride … at midnight. 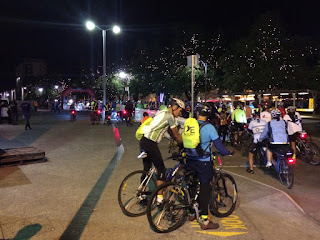 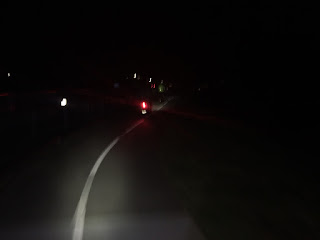 … and that I’d be the very last person to cross the finish line, not just because I’m a slow arsed rambler, but because I’d volunteered to be the sweep (hey, can you think of anyone better than the Rambler to sweep a race?).

This meant that my expected time on the ride was somewhere in the five to seven hour range, depending on who the second slowest rider might be … and assuming I didn’t turn out to be the slowest rider (a real possibility).

But going back in time, I’ll be honest and say that despite my misgivings stated above, when I first heard about Bicycle Network’s “Ride the Night” event, I got really excited about the idea, I mean what a cool idea – riding 70kms around the streets of Hobart in the dark hours of the night with hundreds of other cyclists.   Coolio.

Then I thought about it some more (and saw it cost $100 to enter) and my little negative voice came into play as I realised that I would be forking out $100 to stay up to ungodly hours in the night, to ride places I could ride anyway, at anytime … and I sort of went off the idea.

Then a month or so after that, I saw Bicycle Network’s call out for volunteers, and  noticed that one of the positions they wanted to fill was a sweep, and so after umming and erring about it for a week, I finally put my name down through their online registration system …

…only to be told that the position had already been filled.

So I gave up on the event again.

As it turned out, this was a good thing, as I was then offered an alternative option to go explore some new trails over on the West Coast on the same weekend and pretty much forgot about Ride the Night.

That was I forgot about it until last Thursday when I got a call from Jake, from Bicycle Network, wanting to know if I was still interested in being the sweep …

I was immediately torn – the likelihood of the west coast ride going ahead was looking very, very low (due to the west coast fires and the fact that the ride was being organised by some parks staff on the west coast who were busy fighting said fires) but it hadn’t actually been cancelled and I didn’t want to commit to Ride the Night, only to have to call up an hour later and say I couldn’t do it because a better offer had come up …

Then 24 hours later, having still been unable to get in contact with the organiser of my West Coast trip, I figured “stuff it” and that’s how I got committed to riding Ride the Night.

And to think people say I overthink things.

Being rather nervous about falling asleep during the event, I had a power-nap on Saturday afternoon and then tried to get another hours sleep after dinner, then at about 10.30pm I jumped out of bed and headed out the door leaving Kim and Zara to their ‘girls night in’.

Once at the start I saw quite a few faces I knew, but the main thing that jumped out at me was that this wasn’t the usual event line up of testosterone filled MAMILS on their bikes that cost more than my car.  No, the majority of those present were casually dressed social riders on all sorts of bike configurations and a lot of them had very cool light set ups … 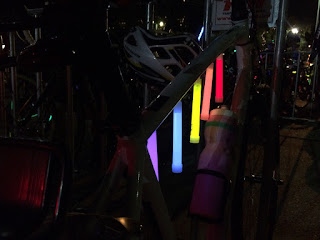 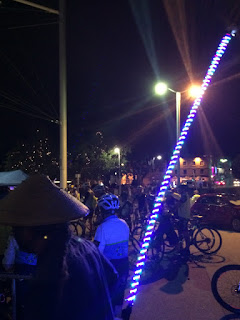 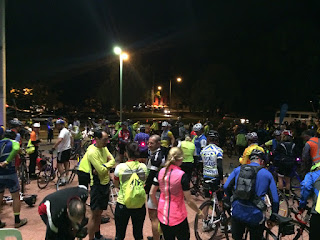 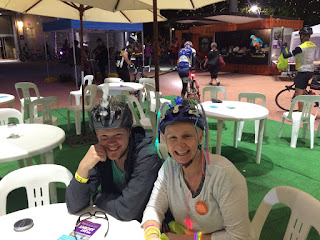 … but of course five minutes later the crowd had vanished and there were just a small stalwart group of four riders (plus the two that came in injured) that hung around for another 15 minutes or so before we were again on the road.
The ride back along the bike track to the bridge was pretty uneventful.  There were basically two groups, leap-frogging each other, and us two sweeps (we had rejoined again).
I caught up with Jake the organiser, just before the bridge and after chatting with him for a few minutes realised that I was again on my lonesome (at this point my other sweep had just enough time to ride over the bridge, before having to head home and get a few hours sleep before heading off to work) and so I enjoyed the pleasure of riding over the bridge by myself cheering on all of the riders returning in the other direction.
I caught up to one of the couple’s about half way up the bridge, but hung back by myself to let them enjoy their own ride. 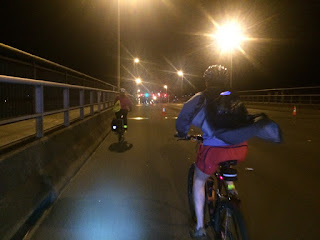 They however stopped at the bottom of the bridge, because the female rider had decided she wanted to cut out the Eastern Shore loop, so after showing her the safe way to get around to the other side of the bridge, I let the guy head off, clipped into my bike and cycled off after him only to hear that very distinctive ‘ping’ sound that a breaking spoke makes.
In disbelief, I stopped and checked out my bike and sure enough, one of the spokes on my front wheel had snapped.
How often does that happen?
Unfortunately that spoke must have been under a lot of load as my wheel now had a distinct 1-2 cm bow in it and only after letting the brakes completely off could I actually ride forward.
The reaslisation did hit me that I was now the sweep, that the support van had sort of left us (they had got sick of waiting at Mona and so had told those remaining that they either left now or they were on their own) and because of my buckled front wheel I was actually having to work quite hard (mentally) to keep up with a guy who was now putting on some power given he was alone.
Suffice to say I was happy to arrive at the Anzac Memorial Park rest stop still in contact with the tail of the field.
I wasn’t so happy to see that there was (a) no mechanical assistance available here (though in defence of the organisiers when I’d texted them about my front wheel problem, they had offered to drive to me with a spare front wheel so I could keep going) and (b) there was only a smattering of cyclists around.
Still, I had a nice, albeit short, break and caught up with Mark on the bean bags while a few other tail-enders rested.  Then, as if no one really wanted to be last on this final section, the last ten or so riders left as one and I set off after them … front wheel wobbling as I went.
One poor guy started to feel a bit unwell (too much fizzy coke was his diagnosis) as we headed up Gordon Hill Road, and we very quickly found ourselves alone once more.  I waited for him at the top of the hill, but then he took off going down the hill, whilst I, with my wobbly front wheel and poor brakes, went downhill at a much more sedate pace.
There were a lot of road marshalls through this section and they were all very happy to hear the news that I was the last rider (it was around 5am by this stage).  Again, I managed to catch back up to the tail riders just as they did the short loop through Bellerive, but then as we went past Rosny College, my poor friend with the coke problem had to get off his bike and do a bit of throwing up which separated us again.
This was unfortunate, as just past here there was a sign directing riders off the clarence foreshore track (just before the sewer works climb) and up the road.  They’d even put a light on this sign so people would see it.
The problem was that the sign had blown off the track somehow and was down in the bushes on the foreshore.  At this point I’d also stopped and texted in my concern about the sick guy suggesting that it would be good to have the medic team at the bridge to check him out and so everyone was in front of me by the time I got to this junction.
And I didn’t know which way they went.
I had noticed a support van and lights up on the road, so despite there not being any sign (it being on the foreshore) I cycled up to them to see how things were going and found that sure enough the other three riders must have continued around the clarence foreshore trail (so back down I went and it was then that I saw the sign blown down on the shore).
I eventually reunited with these riders at the front entrance to the sewerage works, but they had had enough at this point and opted to just follow the road back to the bridge, whereas I, as sweep, felt I had better follow the official route around the foreshore just in case there was anyone else down there.
There wasn’t, but to be honest it was absolutely gorgeous riding around there with the bridge and city all lit up in front of me.  I think it was at this moment that I realised that I’d been riding for over five hours, and hadn’t once felt tired or cranky … in fact it had been an amazing ride.
I caught back up to my sick friend at the entrance to the bridge where he was having a break, it was also here that I realised that because my phone was on automatic “Do Not Disturb” mode between 10pm and 7am, I had around half a dozen text messages which I’d missed.
Oops.
My friend powered up the bridge (he must have gotten a second wind) and then we cruised down the other side finally coming across the medics who had been told to go to the cenotaph (not bridge).
After a quick check that everything was OK, it was pretty much a downhill ride (with one last dog leg around Evans Street) back to the finish line. 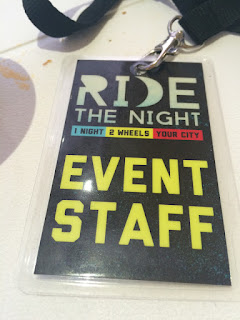 I think we got in around 5.50am.
Most of the other riders had already left, so I just got my free coffee and egg and bacon brekky and sat at the table thinking just how incredibly alive and awake I felt. 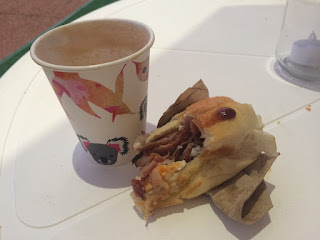 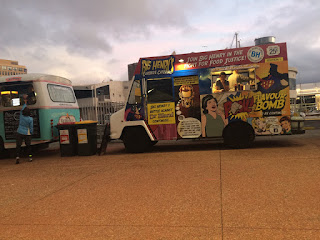 I felt so good I seriously thought about going for an extra loop to chalk up a century ride.
But I remembered I had promised to go home and bring the girls a cup of tea for breakfast in bed, and I’m sort of glad I did because 10 minutes into the drive home all that amazing energy vanished and I slumped.
I think that with any new event there will always be things you can tweak and improve and there were hopefully a few learnings that could be taken from it that will improve next years event, but if you didn’t do it this year because you were worried about being too slow or too tired, then take my advice and just do it.
And if you should happen to find yourself at the back of the pack … say hi to the sweep – it just might be me.