I think like pretty much every other Tasmanian (that wasn’t already stuck in snow), I’ve been salivating since Monday’s snow event (which had snow settled on the beaches) to get out and play in the snow. 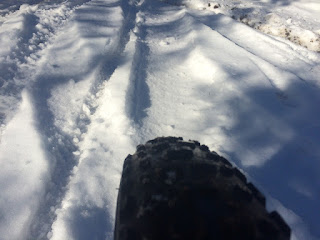 Figuring that the front side of Mt Wellington would already be well picked over by cyclists, and fearing the amount of traffic that was probably heading up to Mt Field and Ben Lomond, I opted to attempt for a ride around the back of Mt Wellington to Collins Bonnet.

I started at the Zig Zag track near Collinsvale, and had to admit that things weren’t looking too promising snow wise as I began the initial ascent up the zigs and zags …

However just as I got to the top and headed onto the East West track, all that changed and suddenly I found myself in snow … 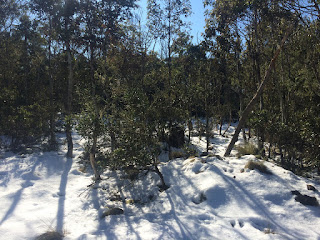 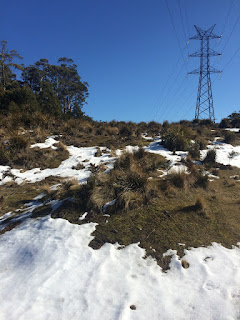 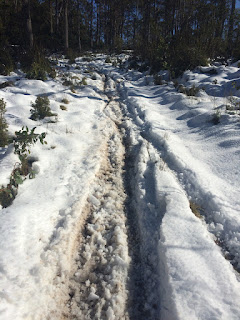 Albeit that it was intermittent and varying in consistency from slush to ice ruts.

In fact, if I’m honest, it was mainly ice ruts from what looked like a lot of illegal motorbike and 4wd use, and ice ruts are about as much fun for cycling in as normal ruts.

I did however find that if I rode on the side of the trail, outside the ruts, I could experience the joys of snow riding on a fatbike.

Except, I began experiencing the exact same problem with my Norco Bigfoot that I had experienced  the only other time I’ve taken it out for a proper ride – the chain kept getting sucked up into the front drive system whenever I had it in the second to fourth easiest gears.

It did, to be fair to this very crappy waste of money I call a fatbike, also seem to almost get chain suck in the easiest gear, but I think, after studying this phenomena for the sixty or so times it happened on this short ride, that what is happening is that the chain is bouncing, or catching somehow, on the outside of the fat tyre and this is causing it to flick up or be dragged into the front drive chain.  The reason I think it’s not happening in the easiest gear is because although I can hear it constantly catching on the tyre, I think I’m going too slowly for it to bounce far enough up to get caught in the front chain ring.

The  result of this was an at times very frustrating ride, but fortunately I was in snow, and not really in a rush, so after about 10 minutes of cursing the world, I just shrugged and got on with the business of riding.  I even discovered that if the chain did get caught, I could just back-pedal quickly and then ride on. 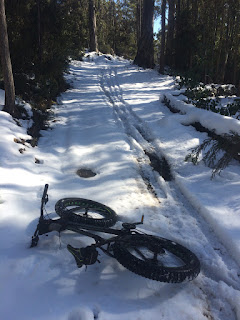 As I got further along the track, the snow got deeper, and then after a steep push up the section of east west track just past the now closed myrtle track, the vehicle tracks stopped and I fund myself in 10-20cm deep virgin snow. 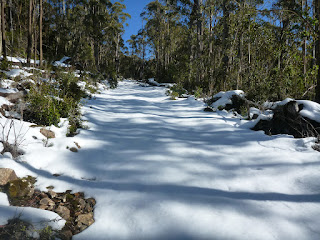 Strange thing I discovered about riding up a steep hill in deep snow … you can’t.

I in fact spent a very long time pushing my bike up through ever deepening snow at a pace of around 1-2km/hr, until finally I had to stop and have a good long talk to myself about my plans.

You see by this point, my planned one to two hour ride had already stretched out close to three hours and I was still a long way from getting through to Collins Bonnet and my planned exit of Collins Cap trail.  At my current pace I wasn’t going to get there until dark. 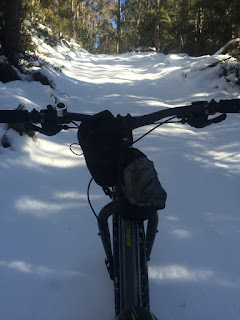 So with a little bit of that “I’m a failure” feeling, and an awful lot of that “I’m going to now get to ride down all those steep hills I’ve been pushing up and it’s going to be fun” feeling I turned my bike around, jumped on, clipped in and pushed off to begin the descent …

OK, that’s not quite true.  something happened, but that something was that the bike sort of sunk down into the snow (which was about knee deep by this point) and I sort of did a slow motion topple off the bike into the lovely deep snow.

Turns out that a fatbike with a fat person on it maxes out at about 15cm of snow.  After that it just sort of sinks.

This was highly distressing, as I’m sure you can imagine, but after a few stops and starts I finally found that if I found a shallow spot of snow to launch from and threw my weight right behind the back wheel I could sort of scoot, slip and slide my way down the hills. 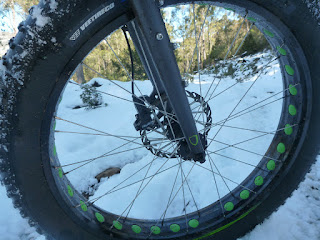 It was while enjoying the challenge of learning this new type of riding that luck finally went my way …in that I misjudged an icy rut, lost control of my front wheel, saw a nice large pile of snow on the side of the track to fall into and so gracefully allowed myself to get thrown into said pile of snow rather than continue to careen down the trail out of control.

Once over the initial pain, and after disentangling myself from rock, bike and snow, I pulled the bike up off the ground and discovered that my phone was missing.  Maybe using my handlebar water bottle bag for an iphone holder wasn’t the brilliant idea I thought it had been.

Thus began several minutes of fruitless searching and digging in the snow trying to locate my phone … and this is where the luck came in, because I didn’t find my phone and so thinking that maybe it had come out right before the actual crash I started walking back up the hill to find it.

And I did find it … about 50 metres up the track where it must have come out in a completely unrelated circumstance.

A circumstance I would never have known about if I hadn’t had that crash.

How’s that for lucky! 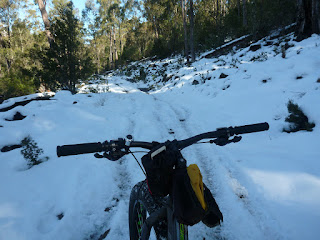 From that point on the ride back to my car was a great combination of fun, terror and frustration (that chain suck really sucked) but as I pulled back up to the car, over four hours after I had left, and despite being covered in mud and snow and being freezing, I have to admit … I was also grinning ear to ear. 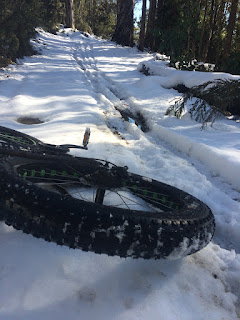 So what have I learnt – I’ve learnt that I may hate my fatbike, but I still love fatbiking … and we need more snow … lots more snow.