This may sound strange, but as much as I hate that moment of terror when a car flicks past you too close and too fast, what I really hate about vehicular incidents on a bicycle is the powerlessness of knowing that even if you feel like you were nearly killed and you have the number plate, and you have the video footage … there is still nothing you can do about it, because even if you take it to the police … they won’t do anything about it (and before anyone argues with me – that’s based on my experience).

That’s why, when I was standing outside Treasury this morning have a post-meeting chat, and I saw a car try and reverse park into a spot across the street, completely stuff it up and instead reverse straight into the rear panel of another (very new) parked car, and then try and quickly drive off so that they wouldn’t get in trouble (and yes they did know they’d hit the car because we saw their whole car shake and then they had to grind past the car a second time doing more damage as they drew forward)

… I quickly took down their number plate.

Then I took a photo … 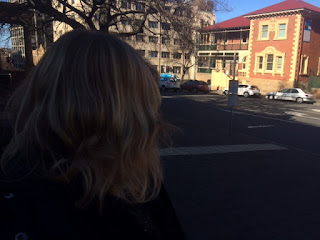 And then I went across the road and left a note on the windscreen of the ‘hit’ vehicle with the details of what happened and the registration number, car description and my name and number as a witness.

About an hour later, I got a very thankful message on my phone (like all true public servants I was already in my next meeting by then) from a poor lady who had been seeing her doctor after a nasty fall.

Double Booyah (I’d helped someone who needed it)

I texted her the photo and told her that if nothing else, at least I’d be happy to declare what I saw to her insurance company or police.

It was a small thing really, but if you haven’t already guessed – it’s made my day to know that at least one person on this planet has a little bit more of a chance to get some justice.