I cycled out of work tonight, and it was just going to be a normal ride home as part of the winter commute.

Like usual, I took it fairly easy as I cycled out into the traffic and across onto the cycle path running along the waterfront.

I pulled up at the Evans Street junction, watching all the car traffic flow through as I had to stop for the usual 3 minute wait for the lights to change and then change again.

I started up the little rise to the Cenotaph, a hill I both love and hate.  It’s here that I actually have to start putting some effort into riding, the legs being to wake up and sting just a little bit, the lungs start to work just a little bit as well and I think about the Bridge climb and Rosny Hill and all the other kilometres to come and think … I hate this bit of the ride.

But there’s also a little bit of me that remembers nine weeks ago when I’d ride up this hill in granny gear wishing I had an easier gear still.

I didn’t have to glance down today to know that I had moved up two gears in those short weeks, and I was going up this hill faster, a lot faster, than I was nine weeks ago … but still slowly.

For a reason I can’t even remember now I changed up a gear and pedaled a bit harder … and it felt good.

But it was still just a normal night.

I live for sub 50 minute nights, they’re my whole reason for riding these commutes, and so far in nine weeks I’d managed to score just two of them.

I had to stop on the way up the bridge to let another cyclist past on his way down, and I didn’t know it until later … but even with that stop I still got a PR for the ride up that bridge.

This wasn’t going to be a normal light.

However, as I say I didn’t know that then, what I did know as I started heading up Rosny Hill was that my legs were hurting a little bit more than I wanted them too, but I knew there was a chance for a sub50, so I pushed through it as strongly as I could knowing there would be a little recovery time heading down the other side.

And so I used it … I refused to change out of the big gear as I attacked the hill, instead getting out of the seat and charging up it.

Then I kept going.

I got to the traffic lights outside Shoreline on Clarence Street and I kept going.

Every time I hurt, every time I wanted to change down a gear, I just kept telling myself that at this pace I was going to get my third sub50.

This was not going to be an ordinary night.

I hit the new bikepath just past Oceania Drive and knowing that this was a chance to make some real time, I changed up gears again and just turned and turned and turned my pedals refusing to slow down as I headed up the hill.

Finally at the new junction with Tollard Road,  I had to stop for a red light and so I quickly checked my strava time … it was just under 33 minutes.

I think my previous best at this point of the ride was 37 minutes and although the math’s in my head weren’t quite working in between my deep gasps for breath, it was going well enough that I realised that there was a chance to not only get a sub50, there was a chance, a real chance, of achieving what I had previously thought impossible … a sub45.

By the time my thoughts had got to this point I was already pedaling hard into Rokeby, and I didn’t stop pedaling as I raced through Rokeby and out the other side.

I eased back slightly, just ever so slightly, as I headed towards Rokeby Police Academy because I knew that losing a few seconds going along this straight could easily be won back by slightly fresher legs pushing up the short, steep climb past the roundabout.

I was hurting at this stage, really hurting, but I just kept telling myself that if I kept pedaling, and pedaling hard, I would crack a sub47 (my fastest ever time by far) and I dreamed that maybe, just maybe, I could get a sub45.  In my wildest dreams, I even thought of getting a time that started with a 43.

The hardest thing about finishing a ride like this is full fingered gloves or more specifically getting your full fingered gloves off, and stopping the strava time.  Just recently I got a time of 50.01 … simply because I couldn’t get my gloves off and my phone stopped because of wet sweaty hands not being compatible with iphone screens.

But not today, today I had my gloves off, the phone code entered and the strava stopped in under six seconds (I was counting in my head).

It was the perfect end, to what felt like a perfect ride … 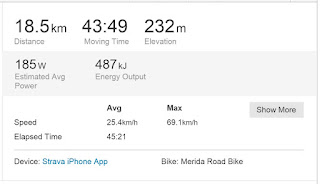 It was a perfect ride, months ahead of when I ever expected to be able to do a ride this fast.

But more than that it brought back the joy of why I ride and race, that turmoil of emotions, the feeling of invincibility, followed by impossibility, the charging into the unknown not knowing if you could win or lose.

It is the joy of a bike.