I went home via Rokeby hills again on Thursday night.

Yea I got lost (again) and it took more time than I had allowed for to get home, but while everyone else was sitting in their nice warm cars, or at home in front of their TV’s, I was sitting at the top of a new road that isn’t yet on ListMap or even Google, breathing in big gulps of air as I looked at the world below me.

Laid out in front of me was the whole of Hobart lit up at night … just for me, just because I was there.

God it was beautiful.

I eventually found a track leading off into the bush (I knew it was there as I had come out on it the other day and seen the road), then I found a new track, and then I found a way out the other side … but I haven’t yet found a ‘great’ way through the hills from Tranmere to Rokeby.

Which just means I can go back and try again next week.

I also found my way through Rokeby this time, and rocked up at home knowing that I had rocked another week of the Winter Commute Challenge (3 rides). 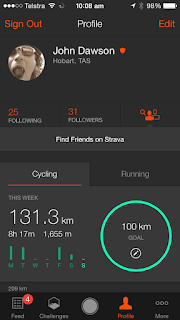 Six weeks to me, two to winter.

Twenty one cycling days to me, with just twelve going to winter.

I was doing so well that on Friday I took the day off, drove most of the way in and then rode my folding bike into work … 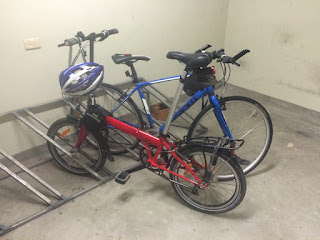 I look so good on that bike.