It seems that at least once a week I will experience a close encounter with a vehicle, and I would guess that in most cases the driver is probably either oblivious to the terror they’ve just caused, or like me on occasion, they’re sitting in their car thinking “oops, that was a bit close … sorry Mr cyclist“

But not always.
I had one car swerve at me (deliberately) this week (I really don’t know what I do to deserve this attention) and another that came up behind me on a corner near my home and who decided I was unreasonably blocking the road (it is a sharp ninety degree corner with lots of glass and loose gravel on the outside so at night I have to sit out in the middle of the road for about 5 seconds to be safe) … and so he was tight on my back wheel, horn blaring at me, to let me know I was holding him up for two seconds.
I confess this guy really p*ssed me off, so much so that I figured that they must be near their home or they wouldn’t be on this road, and so took the unprecedented action of racing off after them and trying to hunt them down … but they got away.
I also had a Government vehicle go flying past me coming out of Rokeby.  It went past me way too fast, and way too close and I was so p*ssed off, I even memorised the number plate.
Then I got home, jumped off the bike … and realised my rear light wasn’t on. 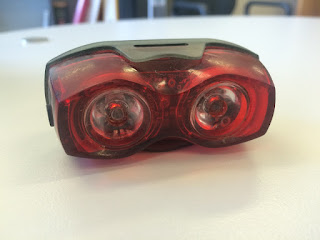 Oops …
Flat battery (to explain, it was a light I’d moved from an old bike, and I hadn’t charged the battery before putting it on).
I kind of felt pretty stupid after that … albeit that I was still wearing a reflective backpack and a second (very powerful) rear light that was happily flashing away on my backpack … thank god for redundancy.
Still .. it is a good reminder that we all make mistakes, and just because we have a close encounter, doesn’t mean it’s deliberate or that there’s any venom in it.
Still … a metre does matter … it really, really does.