And the gap closes in the winter challenge … 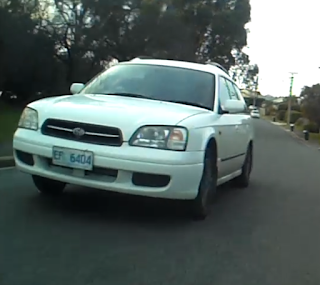 Even without vehicle mishaps, Monday mornings never seem to feel good on the bike.

I usually get to the first little climb coming up out of Lauderdale and my legs just seem to scream at me saying “Nup, haven’t got it, let’s pack this stupid challenge in and go get the car“, however somewhere between there and Clarence street some sort of magic happens, or maybe it’s just that the blood gets flowing in the legs and I begin to realise that work is not so far away really … and it all starts to feel better, it feels worth it … until I find myself at the bottom of the least favourite hill of my daily commute – Rosny Hill.

I dislike the climb up Rosny Hill (in both directions) due to the equation that: my weight + my gearing + the gradient of that hill = hurties, and I don’t like hurties.

So this morning, I was grinding my way up the steepest part of this hill (you know the corner if you ride it) when a certain, nameless, mountain biker went flying past me like I was standing still completely destroying any confidence I had been building up over these past weeks that maybe, just maybe, all this riding was doing me some good.

Yep, there’s no way I’d name such a cruel destroyer of dreams …

However, to demonstrate the fickleness of the day … after a fairly poor morning, I then went and smashed out my fastest ever commute home (albeit with quite a bit of wind assistance) and picked up five strava PRs … haven’t bagged one of those for a while.

The main thing I noticed from the day (on strava, not on the road) is how many other people seem to be commuting at the moment.

Now I do realise that I’m most likely noticing this simply because I’m now so focused on commuting that I’m therefore noticing the other people who are also commuting in every day, but in my own hubris I’ve decided that I prefer the explanation where all these other people are in fact joining me on my winter commute challenge (even if they don’t know it) so I’m going to go with that explanation.

Wednesday was another day of infamy with the second police blitz this year on the Evans Street intersection resulting in fifty-five cyclists and pedestrians getting cautioned for riding through the red light there (See mercury article).

I meanwhile was oblivious to it all until I got into work, as in a moment of very un-john like luck, I hit that magic five second window where the bicycle crossing light was actually green and so I sailed right on through and didn’t even see the police.  I won’t mention a certain beautiful, girlfriend who may have been walking into work through that same intersection earlier in the day and who had not been so lucky (because this post is all about not naming people).

After a few days of mild and enjoyable riding, Thursday saw the return of snow to the mountain and a chill to the air. 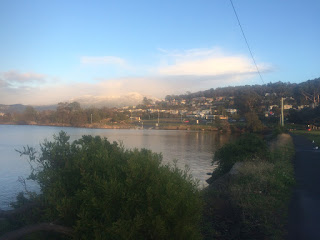 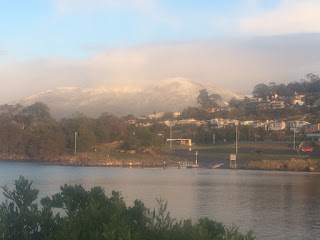 It also saw me hit a new problem … I only did half a commute on Thursday (I rode in, but not home as Marcus wanted to go to Hog’s Breath for his birthday dinner).

Now going out to dinner didn’t seem to me to be a valid enough reason to call a ‘bye’, but what do I do?

Do I give winter the point for the day?  Well that didn’t seem fair seeing I had put the effort into at least riding into work and I also figured that if I applied that rule then any motivation for half day commutes would disappear.

Do I just call it a bye if I commute in, and not out?  This seemed liked the simplest solution, but didn’t really recognise my ride in which got under the claw a bit, but the only other option was to give me and winter half a point each.  To be honest, although somewhat clumsy this did seem the best solution, but then I have to start adding up half days and that seems a hassle … so I’ve decided at this point just to call it a bye, reserving my right to change this later if more half day commutes appear.

Did I mention just how much time I have to think over stupid things in great detail when commuting two hours a day?

Despite all my effort this week, the sad reality was that come Friday morning, it was a tied 2:2 heat which meant that for the second week in a row I had to pull on my sweaty and smelly cycling gear and head into work on the bike on Friday.

And to make matters worse, because my road bike was at work, I had to ride in on my mountain bike.

It took me a full 10 minute more (1hr:05mins) to ride in on the mountain bike (though it was kind of nice) and I also got to ride another new section of the new Shoreline to Rokeby cycleway which had just opened … 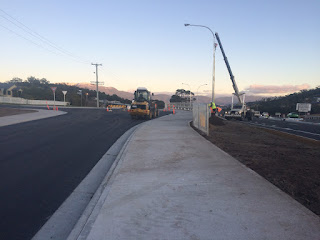 … or maybe hadn’t quite opened and I cycled down it in oblivious bliss.  Definitely one of those two options.

And that was the week … 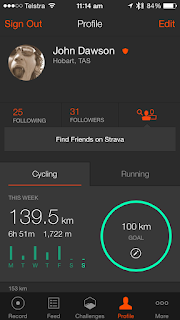 With three full commutes,  one half commute (bye) and one mini-commute (medium bye) that means I win the week with three weeks to winters two fails.

On the points score (which I’m sure no one is interested in until I start winning), Winter creeps up to 11 points and I’ve made a big move up to 10 points, so winter is still ahead, but I’m rapidly closing.

In the medium category, winter scored no points this week, and I scored three, meaning I move into the front at 9 points to winter and 10 points to me.

Woo Hoo … but I keep reminding myself that if this was the Tour De France, then this would only be the end of week one and there is a lot of cycling still to go … and I have the attention span of a gold fish when it comes to challenges like this.

On other good news, despite the humbling fly-by of he-who-shan’t-be-named (maybe I’ll call him Voldemort from now on) on Monday, all this cycling is doing me some good dropping 2.7kgs in the month … (but with a heck of a long way still to go). 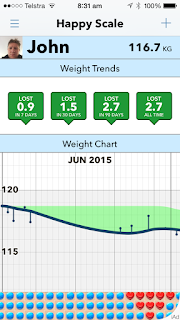