I’m sure that somewhere in Hobart right now there is a lady telling this same story.

It’s a story about how she was walking over the bridge minding her own business when this cyclist came flying up behind her, screaming at her to get out of the way … 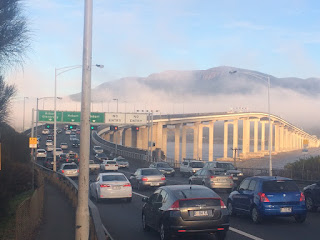 From my perspective, the interaction went slightly differently …

Coming up behind a pedestrian on the bridge isn’t unusual, and often they will hear you as you clatter over a lose metal plate, or at night they’ll see your lights coming up behind them, and there’s a fairly well established politeness to it all as the pedestrian squeezes to one side of the walkway or other and we cyclists squeeze past with a polite “thank you“.

But then, every now and then,there is an encounter like this morning where you come up behind someone and they just don’t know you’re there.

My usual approach is that when I’m five or so metres behind them  (and slowed down to their pace) I call out (just above traffic volume) “just coming up behind you“.

Which work 7 times out of 10 .  Sometimes they’re a little shocked (and I’ve been there as a pedestrian and know what it’s like), but usually they just step to the side and once again you do the shuffle-squeeze past.

But sometimes they don’t hear this call, as was the case this morning, and so after a few seconds pass, I call out a second time “Excuse me … may I just get past” … usually at about the same volume.

This usually always works, but this morning … nothing.

I looked at the person in front of me and for the first time it registered that they had a big hat, scarf etc. on and the insight suddenly hit me …  she’s got earphones on and is listening to music, which is why she can’t hear me.

So at a louder volume, I call out “EXCUSE me, just trying to get past“

Finally, after a few more seconds, I really ratchet the volume up and yell out “EXCUSE ME“.

… at which point this lady jumps out of her skin, throws herself against the railings (like I’m hurtling past at 50km/hr and had just blow a fog horn) and turns an elderly face to me with deep fear in her eyes (but no earphones in her ears) and just stares at me as I slide past …

I vainly try to explain … “Sorry, I did call out a few times“

But I don’t think it registered, and I was already 20 metres in front of her before it all sank in.

So to that lady, somewhere in Hobart, that might now hate those speeding, screaming cyclists on the bridge … I’m sorry.

On such partial interactions are misunderstandings built between pedestrians, cyclists and motorists built., so I really am sorry.