And we have a win! 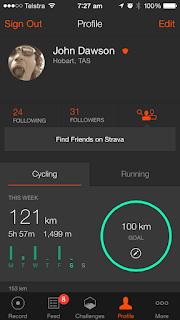 But I get ahead of myself.  If you’ve got no idea what I’m on about with this Winter Commute Challenge, then here’s a quick recap:  For some whimsical reason that I’ve almost forgotten, I dreamt up this idea of doing a winter commute challenge to keep me motivated to keep riding through winter.  I admit that I expected my interest in this challenge to last about as long as it took me to write the first blog post … but it has strangely persisted.

The rules were pretty simple – If I ride to and from work (40kms return) I get a point, if I don’t ride -Winter gets a point.  At the end of each week, and ultimately at the end of winter, either me or winter will win depending on who has the most points.  I also allowed that sick days or special circumstances would allow for a ‘bye’ where neither of us got points.

Well I’m pleased to report that week four saw me back in the game and on top of the podium … albeit with a long way to go to catch up in the overall winter challenge.

Monday
After a fairly decent ride around the Tanagara Trail on Sunday, my legs had that horrible empty and weak feeling in the morning, and I think I had one of my slowest commutes ever (around 58 minutes), but I did ride and that’s the important thing in this challenge. 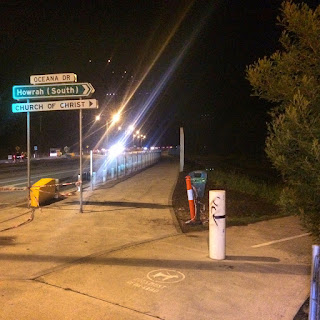 … and kind of wish I hadn’t bothered.  It’s a pretty disappointing route, with no thought to making it an attractive cycling experience at all, it’s just one boring chunk of concrete right on the side of the highway … I just hope that they don’t close the old route, and connect them near the top so I can stay on that.

Another thoughtless contribution to cycling infrastructure by our beloved roads department. Sigh.

It also looked strangely unfinished when I cycled it with bits of plastic lying around and pipes sticking out of the pavement.

Still back to the important point – day one to me.

As I was warming up in front of the heater that night, I noticed Kim looked like she was preparing Zara’s lunch for school the next day, which was obviously weird as she only did that if she was leaving early and I was taking Zara to the school bus, and I was 100% sure that wasn’t the case because Tuesday was locked in as another commute day for me … so I thought I’d ask her what she was doing ..

“Are you making Zara’s lunch?“

“Oh … am I taking Zara to school tomorrow?“

“Yes, it’s Tuesday, and you said you’d take her to school.“

Me (quite indignantly) … “well, I don’t remember doing that“.

“You do, we discussed it … remember.“

“Yes we did, Tuesday’s my platinum club gym session in the morning and you said you’d be happy to take Zara to school on Tuesdays so I could go.“

“Oh yea … that discussion … we did discuss that didn’t we  … quite a few times“.

And that’s how I drive Kim crazy, and more importantly how I found myself with a winter challenge commute dilemma …. I needed to ride in on Tuesday to beat winter, and somehow I’d written the day off in perpetuity.

As I was pondering the implications of this, a seed of a thought came into my head … a new rule … maybe I could introduce a mini-commute on Tuesdays … I’d drop Zara off at the bus, drive to Montagu Bay, and then do a min-commute in from there over the bridge and still get a point.

It was genius (and it saved me paying for parking) … and so that’s what I did.

I discovered two things by doing this … first, and most importantly, my mountain bike is so much less wind affected than my road bike on the bridge and I love that, and secondly, despite all the kudos I give myself for making the effort of doing a mini commute, counting a short 15 minute, 5 km commute as a point in the winter challenge feels like cheating.

So I’ve decided to compromise, and in an effort to give myself some chance of winning (and hence staying interested in) this challenge, I’m introducing the “medium” challenge category to the current list of race categories.  Under this category, I’m going to count any day that I at least commute from the eastern shore by bike as a bye … that is I don’t get a point (as that felt like cheating) but I also don’t lose a point.  Clever, huh?

Wednesday
Both my legs and my lungs felt a lot fresher on Wednesday than they did on Monday and for the first time since I was sick, I started pushing myself a bit going up a few hills and feeling the burn.  That was the good news.

The not so good news was that I may have been wrong about the new cycle path being open.  Either that or they’d closed it again.  Either way it was back to the old route (which confirmed my thoughts from Monday that I preferred this route).

The other bad news was when I got home and went to plug in my still fairly new (and expensive) Fly6 camera light … only to find that the charger port had detached from the motherboard and was now rattling away inside the camera  … it will be interesting to see if they’ll replace it under warranty, if not then I figure it cost me about $10 per commute. 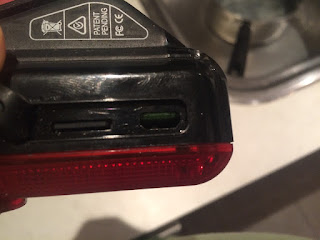 Thursday was a day off the bike (I had to pick the kids up after school) and thus came a decision that surprised even me … I rode into work on Friday.

A history making event, as I never ride into work on Friday.

What was even more shocking, is not only did I ride in, I felt good on my bike (albeit that my nose is still clogged up like a 20 year old drain pipe) and so I pushed myself on the way home, pulling into my garage just as my bike ticked over to 50 minutes and zero seconds.

A full eight minutes quicker than my ride on Monday, and my second best time ever on my road bike (Just for the record, it was taking me jut under 50 minutes to ride to work on my electric bike and so I am trying to beat that consistently as a long term goal).

So at the end of Week 4, here are the various standings:

In the traditional hardcore points category, I’m still a long way behind, but I have closed the gap marginally with winter moving to 10 points and me moving up to 7 points.

Finally, in the new ‘medium’ category, my mini-commute on Tuesday robbed winter of a point meaning it’s a 9:7 race.