Well if last week was bad, then this week in the Winter Commute Challenge was a disaster. 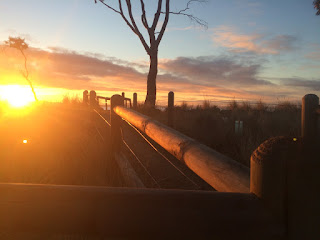 My man-flu from Friday erupted into full on “I’m sure this is the end of the world and I’m going to die” man-flu that night, and I had to suffer through the weekend, mostly by myself as Kim wisely fled to the other house so as to avoid getting woman-flu which apparently makes your head explode.

Yep, just me, the pups and the entire series of Game of Thrones … it was torture.

Due to my man-flu, Monday was spent in bed sick (so another bye) and Tuesday is now pretty well locked in as the “take Monsters to school day” (so Winter was up 1-0).  Not that I would have ridden in on that day anyway the way I was feeling.

Wednesday and Thursday I was still coughing up my lungs and cycling wasn’t an attractive option (winter 3-0) and to be honest I was only saved from losing another point on Friday by a last minute nomination to go on a new Pilot State Service Strategic Management Program which required me to spend an induction day at Rokeby Policy Academy … This, under the rules, made it another bye.

End result … Winter is now up two weeks, to my one, and overall the score is winter 8 to my measly 4 points.

Not good, not good at all.