So … week two of the Winter Challenge. 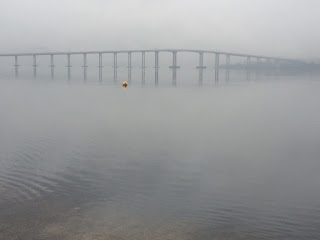 Monday was a public holiday (so that’s a bye), and Tuesday I was on monster drop off duty, so that’s a point to winter.

Wednesday and Thursday were my planned riding days, but they were also Budget Estimates days and I was on the ‘B’ list for possible Departmental call up.

Now I am, let’s be honest, a bit of a slob and would happily go to work in t-shirts, shorts and my crocs if I could (even in winter).  This is why I found myself ransacking my wardrobe on Wednesday morning trying to hunt down a tie (any tie) to wear in case I got called up to Estimates.

End result … I got behind schedule … and drove in (and found I had moved all my ties into my office for just such an emergency).  Winter was up to 2-0 for the week.

I wasn’t called up to Estimates on Wednesday, and with the assurance that I wouldn’t be needed on Thursday either, I finally got a winter commute in.  It was 2-1 for the week.

Tempted to try and come back in with a 2-2 week, I set myself the goal of riding in on Friday … until I woke up that morning with what felt very much like an oncoming bout of man-flu, so you guessed it … Winter 3, me 1.

Which means at the end of week 2, it was one week to me, and one week to winter, and overall Winter had turned the tables on me with a score of 5 to 4.

Bring on next week …