We all love Jetstar don’t we.

They always throw some little challenge at us to keep our flights interesting.
This time around, it was this alert … 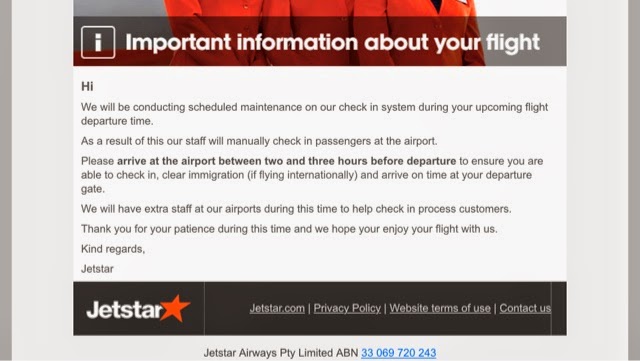 Yep, their check in system was down and so they wanted us to be there 2 or 3 hours early, which was great, given I was working in the morning and flying out that afternoon.
It was also unclear whether this applied to the domestic flight, so I tried calling Jetstar to clarify if this warning was just for the international flight, but after spending 5 minutes on the phone going from one automated message to the next, I gave up, and resigned myself to getting there early.
Then I got this text message … 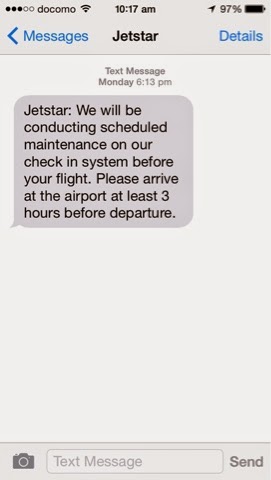 It was at least three hours now.
So we turned up at Hobart airport early … and of course no maintenance was going on and they were still checking in flights normally.  In fact they were bemused to see us so early as they were still checking in the previous flights.
But we did get fire exit row seats on the Hobart to Melbourne flight, so I guess that was a bonus.
Then we got to the Melbourne international check in and it was deserted, so we tried checking in anyway (it’s all automated now) only to have a rather rude Jetstar staff member come over and tell us we were too early to check in.
I explained that we were there early due to their notifications asking us to be here at exactly this time, to which her response was “well do you see anyone else here … obviously you misunderstood”.
Then she walked off.
I kid you not.
So, I brought up the text message on my phone and walked over to show it to her and her response was “yes, that means get here so you’re ready when check in opens three hours prior to the flight.”
Now, I’ll be fair to her and say that with hindsight you could interpret the messages that way, but they could also have made it a lot clearer simply by saying that they’d like us to be there, ready when check in opens at 3pm.
It’s a slight change, but an important one.
But they won’t and it’s for one good reason we all understand.  We travel with them because they are cheap, and they’re cheap because they don’t offer a premium service.
And whilst I might blow off a little steam about this in the blog … you know what … Despite the constant frustration of this when flying. Overall I’m ok with that deal.