Travel has its routines, it’s just a shame I don’t understand them. 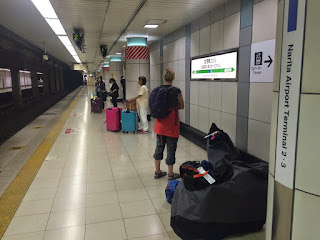 I have however found that the first day of travel to any new Country centres around tiredness, decision overload and confusion.

Maybe that’s why people go on those organised tours I’ve heard about where all the hard bits are done for you.

So, if you’ve read the previous post you already know we had the usual fun and games with Jetstar, but to their credit, they did get us into the air in some pretty bad wind conditions, they then got us from point A to B (avoiding a typhoon along the way) and put us back on the ground safely and on time and that’s all I really ask of them.

From there it was up to us.

We landed at around 9am and couldn’t check into our hotel until 2pm which was a bit annoying,  but we figured that we could at least drop off our luggage and go for a walk around Tokyo.

We also figured we weren’t in a rush, and as we got through customs extremely quickly we decided to reward ourselves with a coffee and a cup of tea … 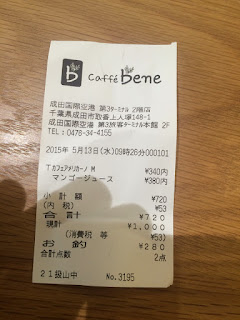 As you can plainly see from the docket, I erred and ordered a cafe americano (long black) when I should have ordered a cafe latte, but these are the things you learn on day one.

Kim went and explored the joy’s of Japanese toilets (warm seats, music on demand to hide any nasty noises and extremely complex soap dispensers) whilst I went and stole our third luggage trolley for the day to cart our two bikes and other gear another 400 metres closer to our goal of escaping the airport … before we came to yet another sign saying that we can’t take our trolleys beyond that point.

Next it was onto the free shuffle bus to get from terminal 3 to the train station at terminal 2 (which must have been all of 500 metres away), then another trolley stealing session, and then yet another exploratory expedition as we found our way to the end of a very long line of people all waiting to get their JR Rail Pass.

Finally, at 11.18am we actually hopped on a train and departed the airport. 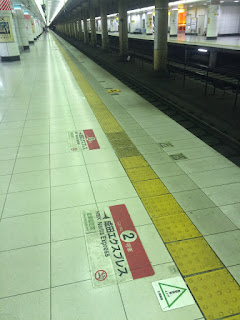 Japan rail stations, I am pleased to report are every bit as organised and punctual as we’ve all been led to believe … or at least the airport one was. 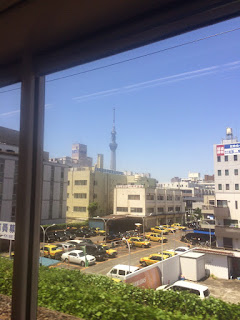 An hour later we got off in the centre of Tokyo only to find ourselves in what felt like the world’s biggest and busiest rail way station (note from the future – after two more days, Tokyo station now feels like a minnow).

It was at this point that Kim was heard to be swearing that she was never, never ever, going travelling with bloody bikes again as we heaved and puffed and sweated our way to the station exit where we could finally put them together. 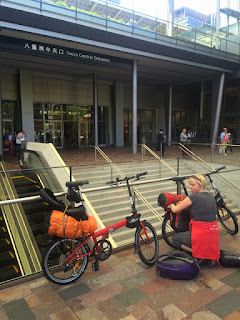 Then all we had to do was push them (we weren’t yet brave enough to ride them) to our hotel .. somewhere .. over that way … somewhere.

Actually, I’ve wised up in my old travelling age, and before we left Tassie, I had downloaded the Google Map of the Tokyo area into the Gaia GPS App on my phone, and I’d way-marked the hotel, so it was actually pretty easy to navigate our way to the hotel once we were out of the station.

Once there, we were even allowed to check in a little early, which for a day one travel day is pretty darn good,

Now we’d be warned that travel life in Japan would be hard, but two hours later (I may be exaggerating a bit) we were still wandering around trying to find a restaurant we were brave enough to go into.

In the end our first meal in Japan .. was at an Indian Restaurant.  Just because it was the first restaurant we came to with an English menu and prices we could read.  As it turned out, it was fantastic Indian (the best Kim’s had since she last left Birmingham).  It also didn’t bankrupt us which is always a day one risk.

That night we again wandered out to enjoy the street-life of Tokyo and as we were in one of the snazzy districts we were’t disappointed. 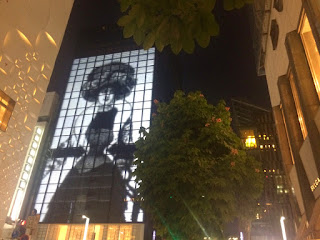 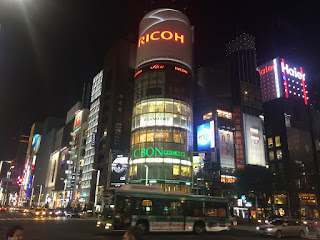 After another meal (which I am ashamed to say was pork chops and burgers) we crashed.

We’d survived Day one, but we’d already got a glimpse into the difficulties Japan was going to offer up … and I was starting to think that the normal difficulties that one experiences on day one might be spread over a few more days on this trip …