Here’s a bombshell … I can ‘get‘ something, without necessarily thinking it’s right for me. 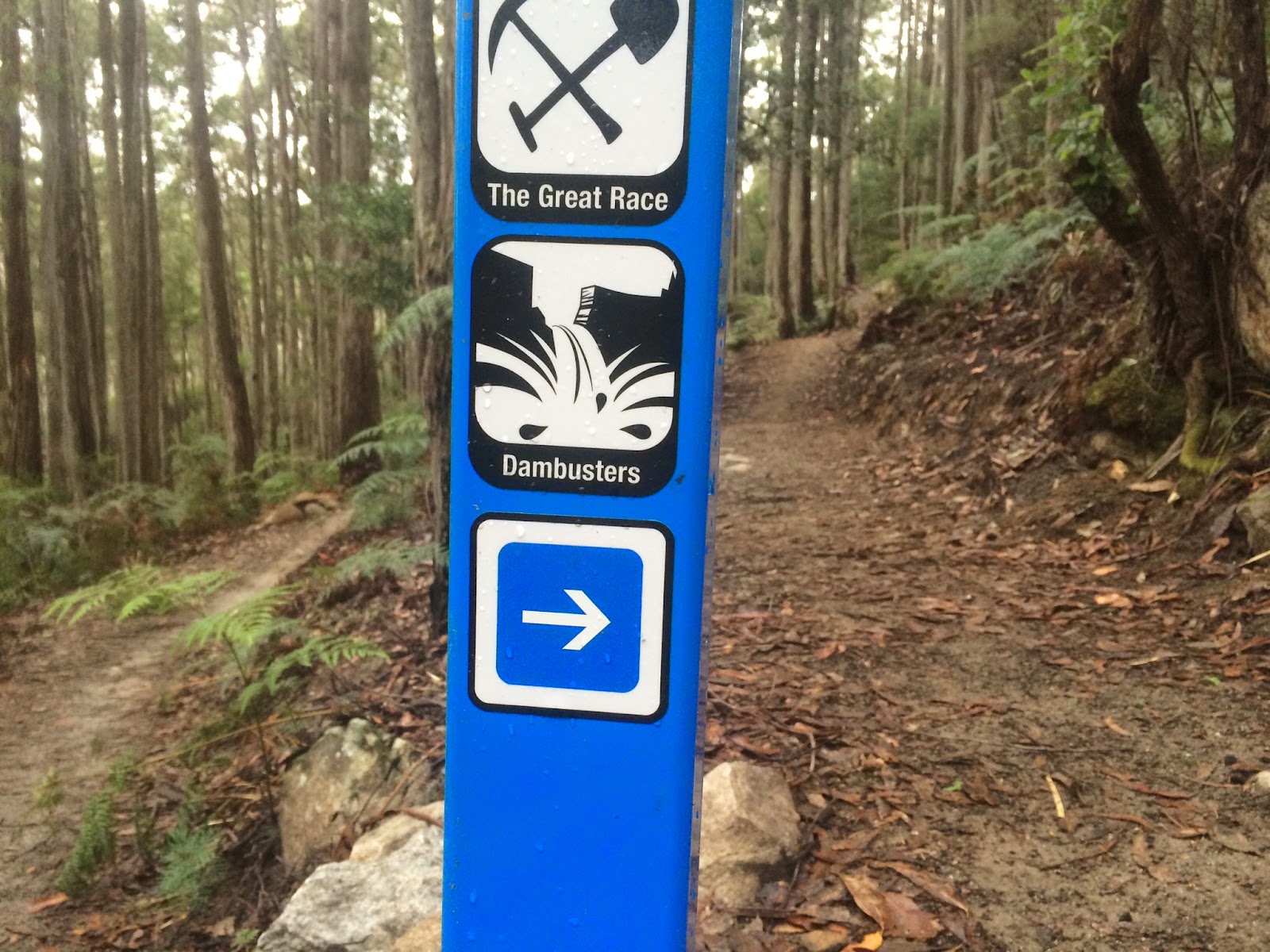 For example … I get that some people like to undertake incredible feats of endurance – they riding amazing races like the Monaro Cloudride 1000, the Great Divide Race, The Iditarod and the Race Across America (just to name a few) – just to test their limits.

I respect that incredibly, I even wish I was more like those people … but I’m not.

I’m a lazy wuss, who, two hours into a bike ride, is wondering where the nearest coffee shop is, not whether I could do this for another eight days without sleep.

My point is I get the endurance thing, and I love that those experiences are out there … even if I’m not  personally motivated to do them. 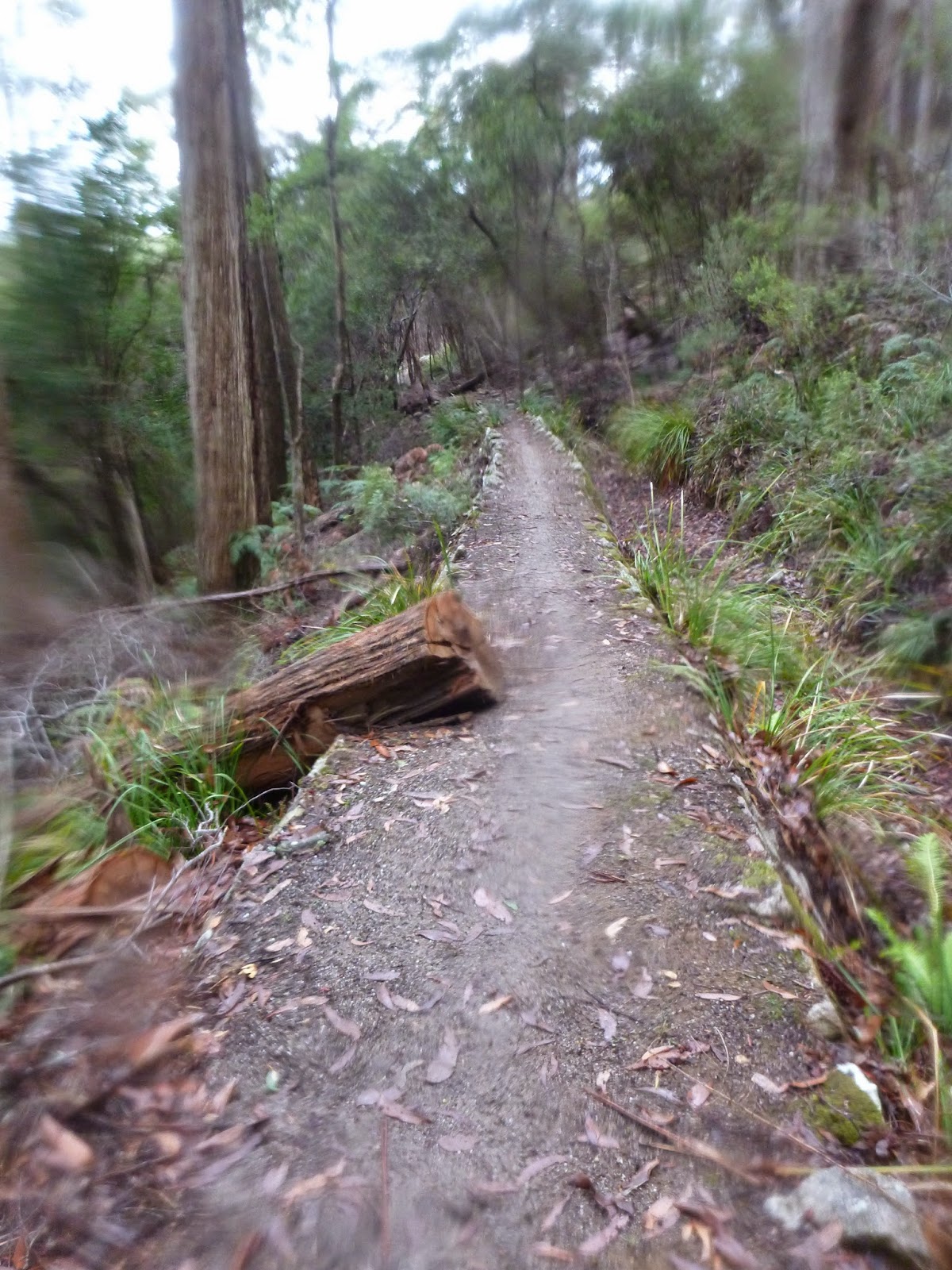 I also get that some people like things that I don’t.

The downhill discipline of mountain biking comes to mind.  Yep, I get that people like to go hurtling down steep, technical trails to test their skills … trails which just make my sphincter retract and my cowardly ways come to the fore as I push my bike down them … slowly and carefully.

I get it, I even enjoy watching downhill MTB events on TV.  I’m happy there’s trails out there for those crazy people who want to ride them – I just don’t want anything to do with those trails because they scare me. 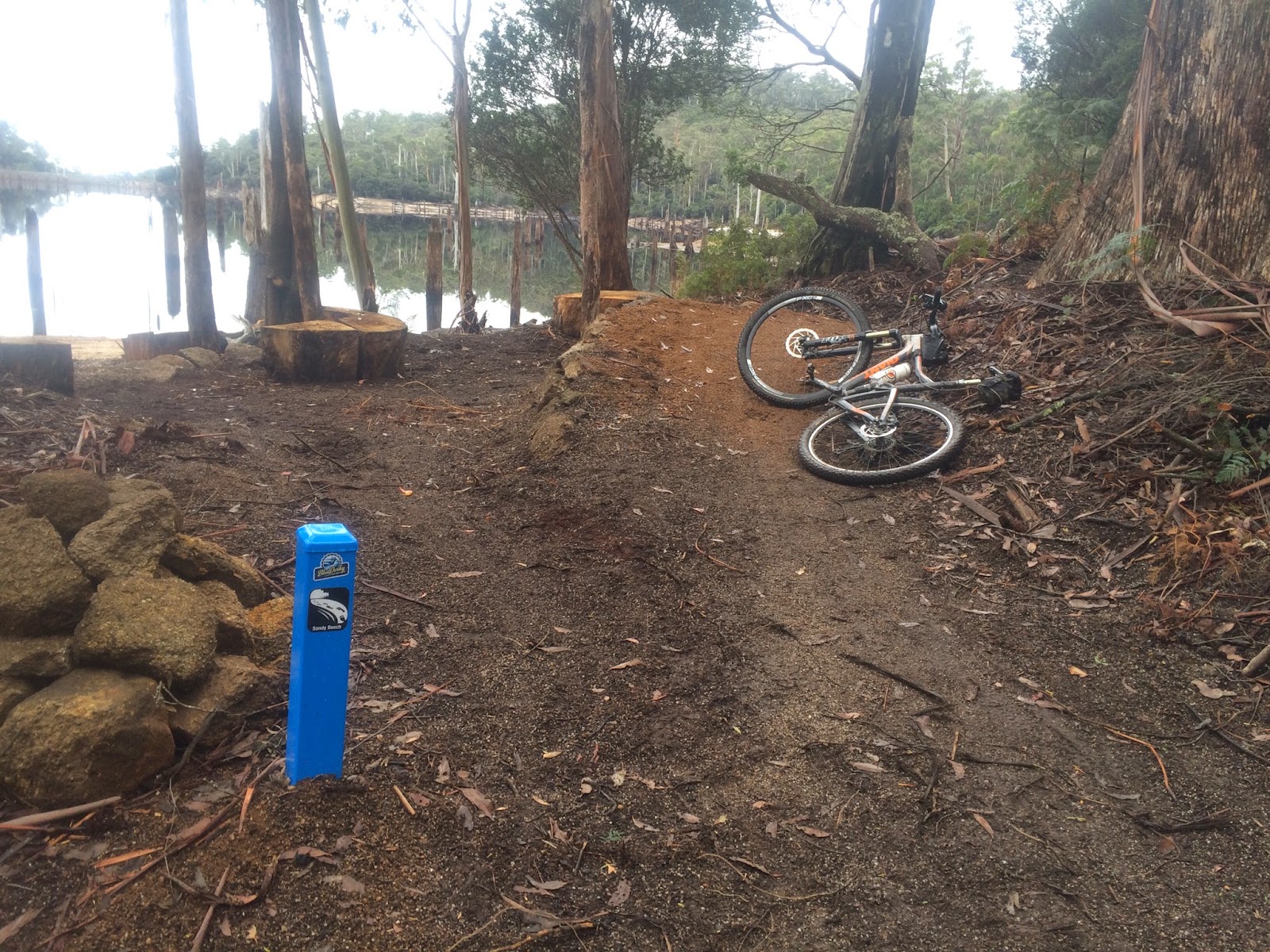 You can see where all this pathetic positioning is going can’t you?

I’m trying to be gentle, and not create a storm of “you don’t get it” emails, but here it is …

I really genuinely do.

But at the same time – I doubt I’ll be heading up to ride Dam Busters again anytime soon because ‘getting it’ and ‘liking it’ … well they’re two different things.

(I will go back and ride it once more, probably next summer when the trails have dried out to see if that changes my mind) 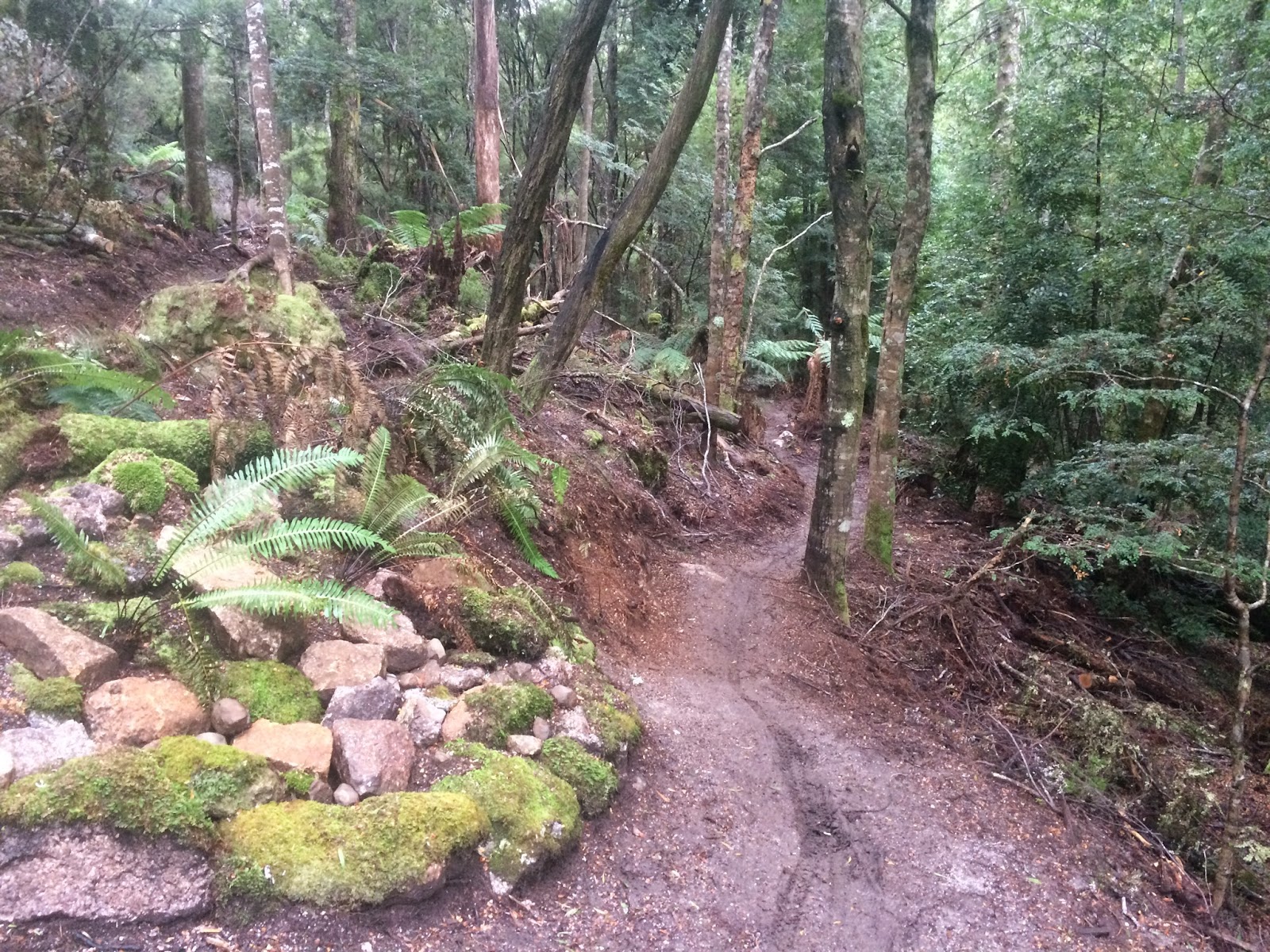 What is strange is that I used to love the old trails that Dam Busters follows (in part) just the way they were, and I love the rest of the Blue Derby Trails, but Dam Busters … nah.

So, now that I’ve been brave enough to say that out loud, I accept the pariah status that comes with the statement and will attempt to explain myself a bit more.

Firstly, let me say I was keen, dead keen, to ride Dam Busters (this means I had high expectations).

I was so keen in fact that  I camped at Derby on Saturday Night and was first out on the trail for the official opening day.

Which, when you think about it, is kind of cool. 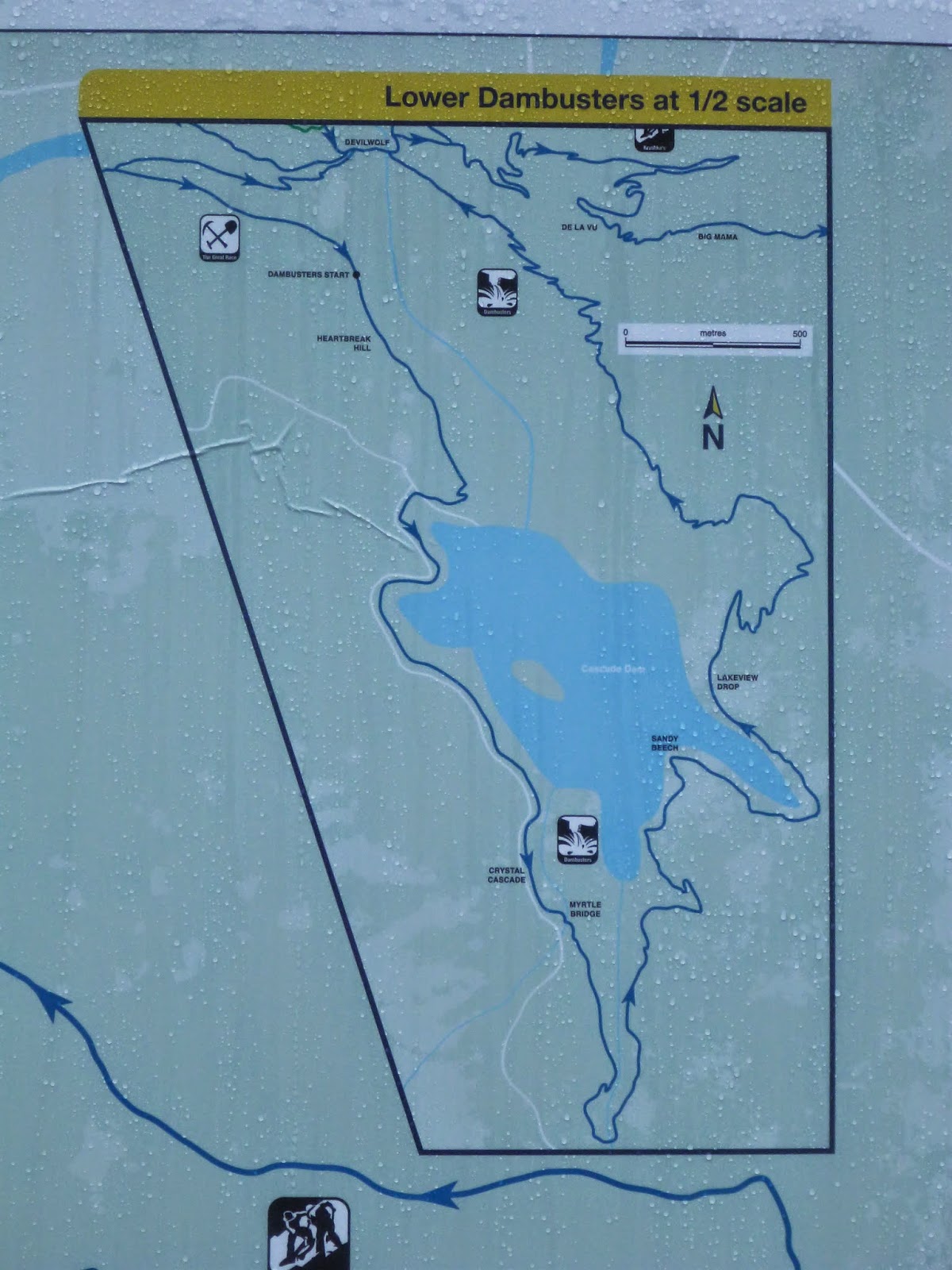 Yes, a lot of people had already ridden the trail (you could tell by the many tire tracks) but I was the first official rider on the trail (at least as far as Sandy Beech which is where I was overtaken by two other riders) and that’s cool.

I opted to ride up the normal trails (rather than the road express) to get to the Flickety Sticks trailhead and followed this to the junction to Dam Busters which had previously been blocked with “Under Construction” signs, but no more. 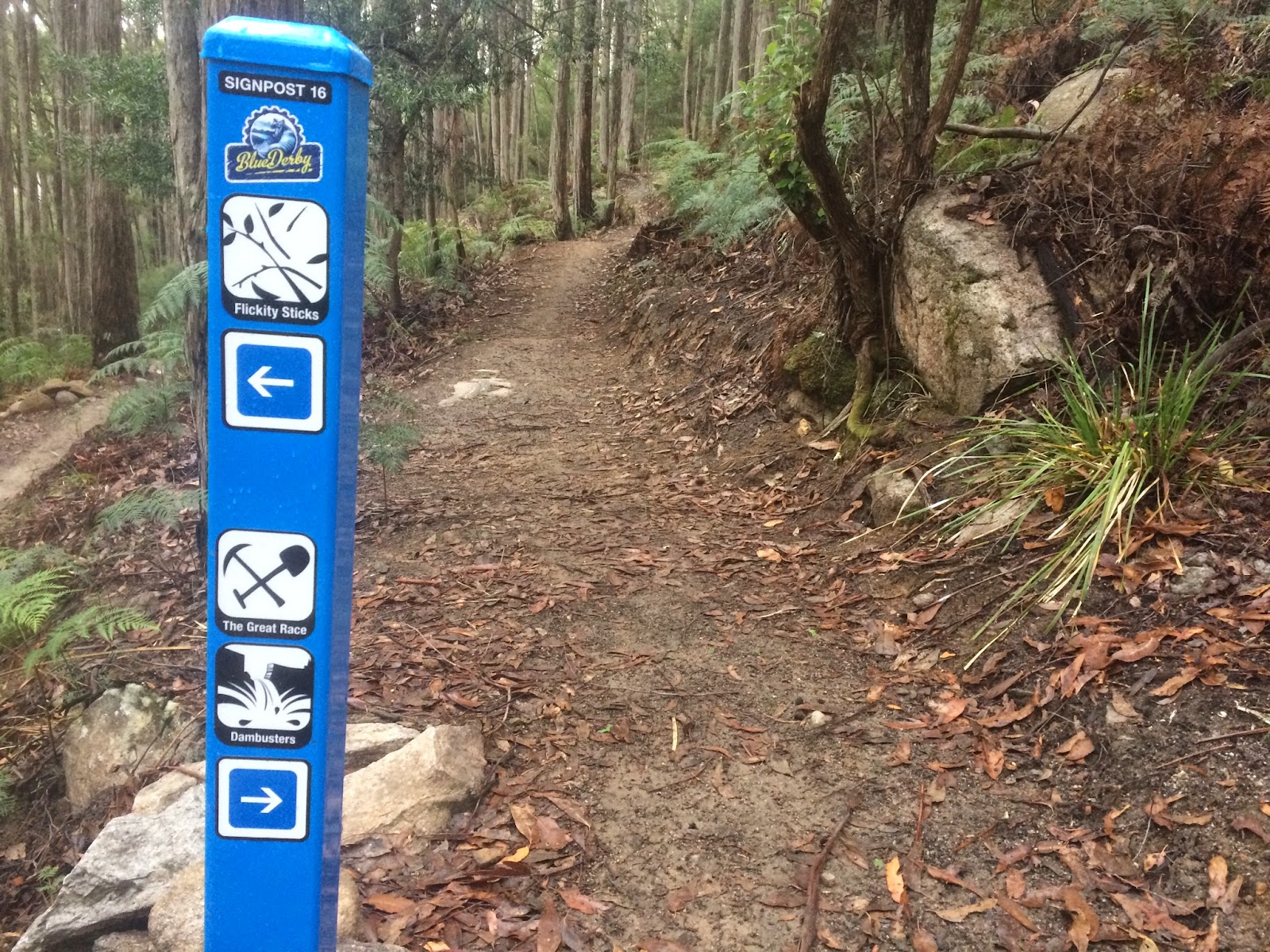 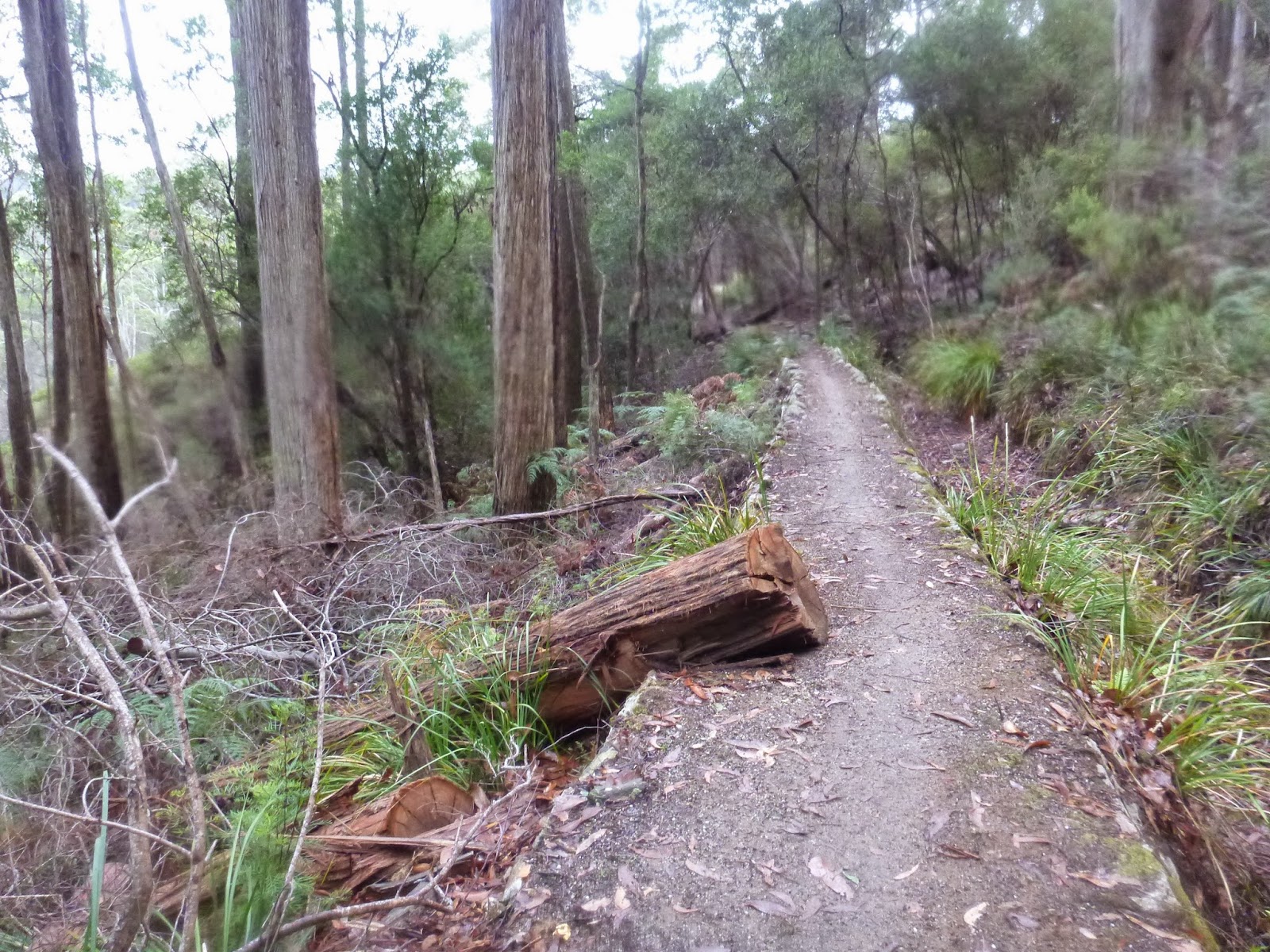 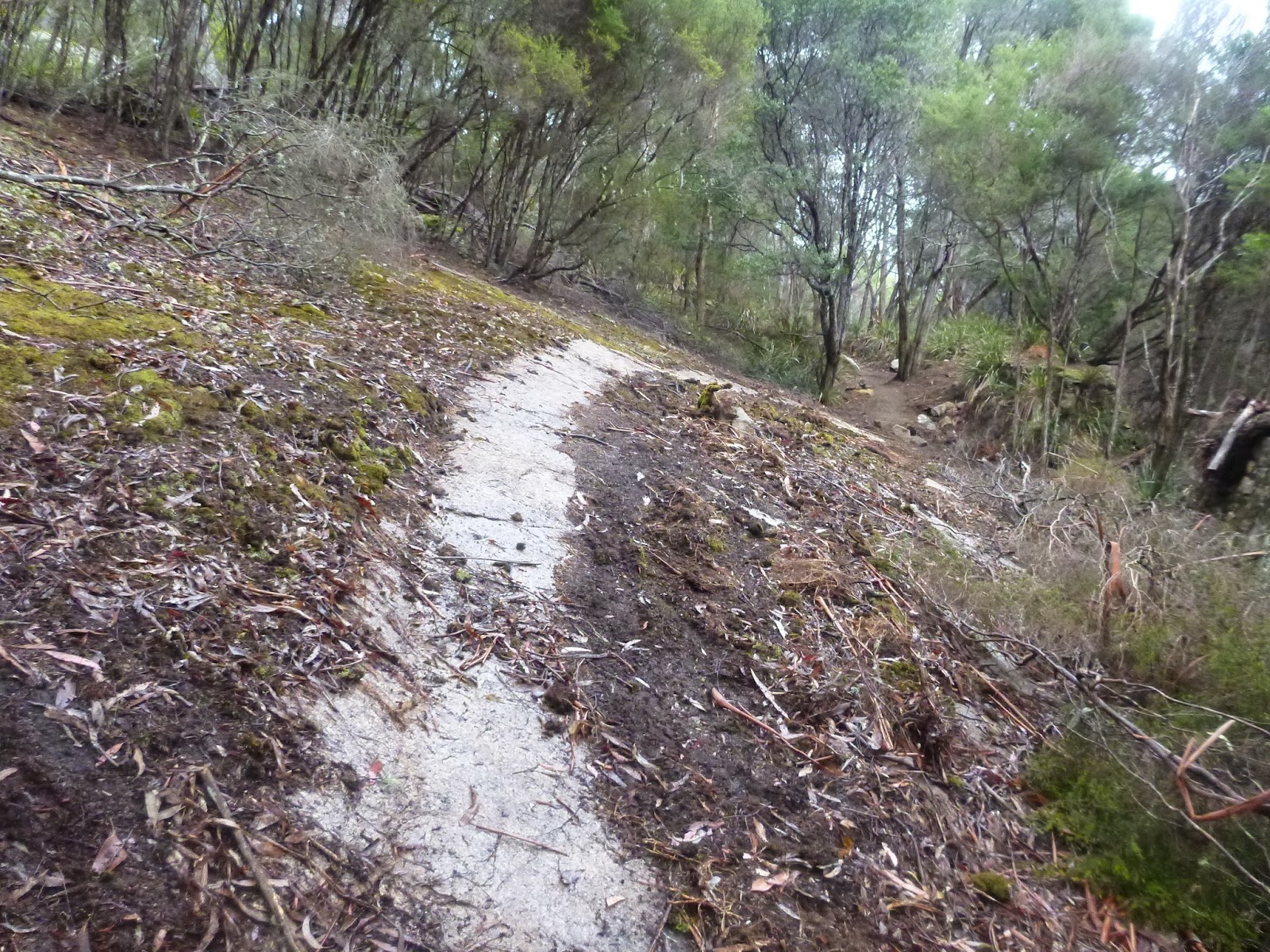 … it looked exactly like every other wonderful granite stone thing that I’d ridden on all the other Blue Derby trails, but there was one big difference … as soon as I hit it (admittedly at fairly low speeds), my bike decided to act like a dog running across ice (I was running at 33 PSI) and well next thing I knew, I was down on the ground (except it was a rock, a hard rock) … 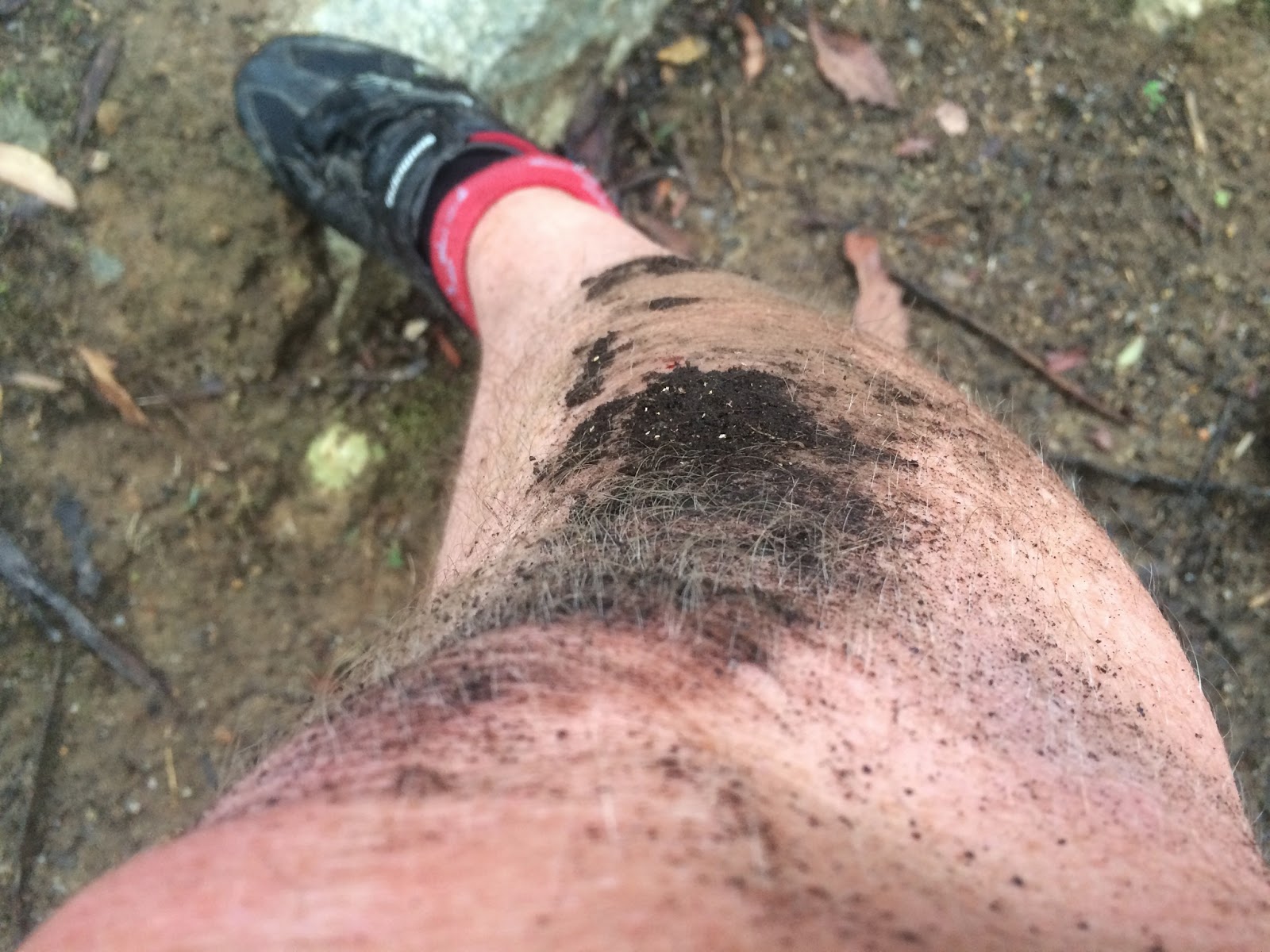 Nothing serious in terms of damage, but the confidence was shaken and the trust was gone.

Because of this, I hated the rest of this short section out onto the trail which comes out below heart break hill. 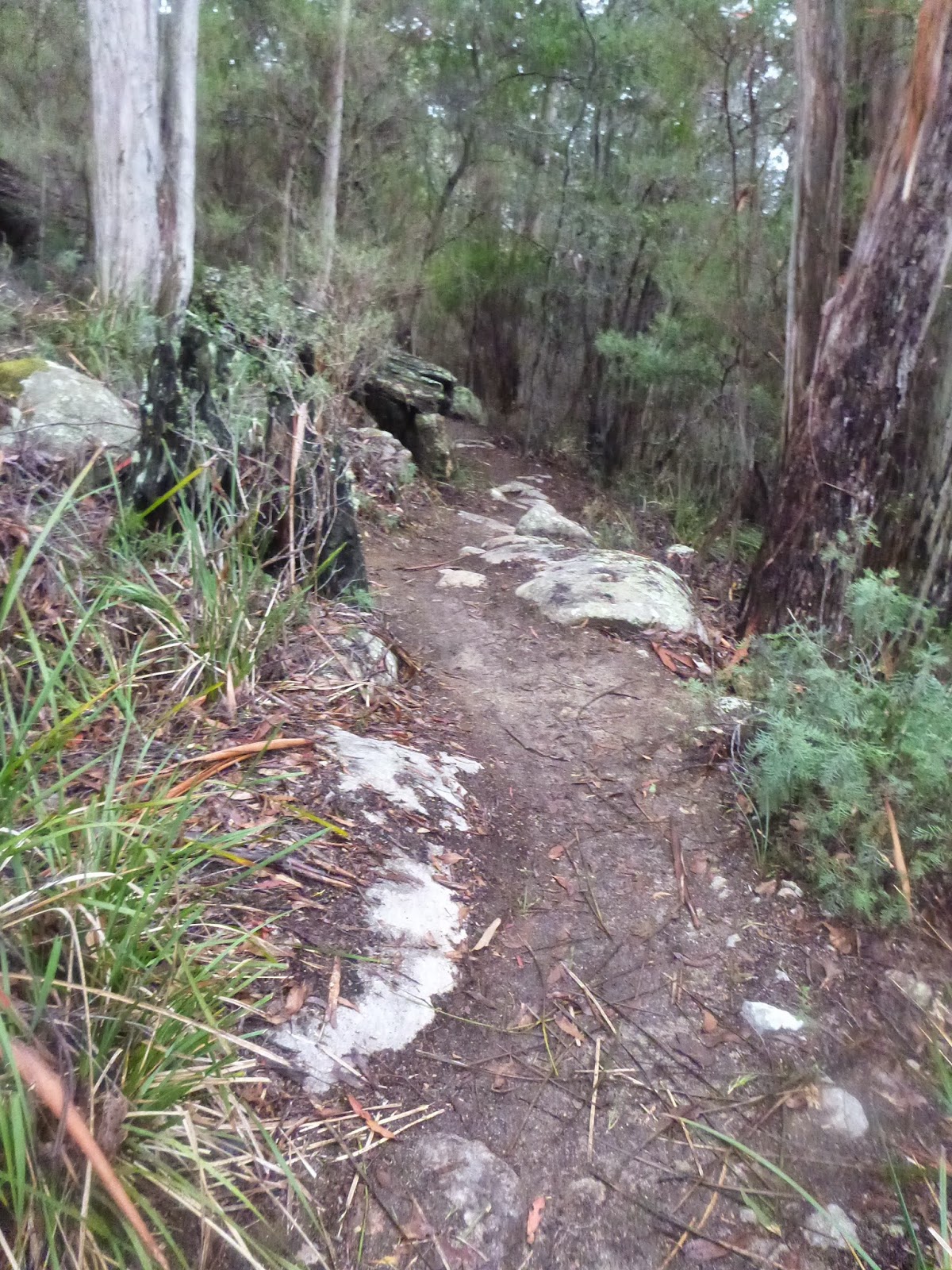 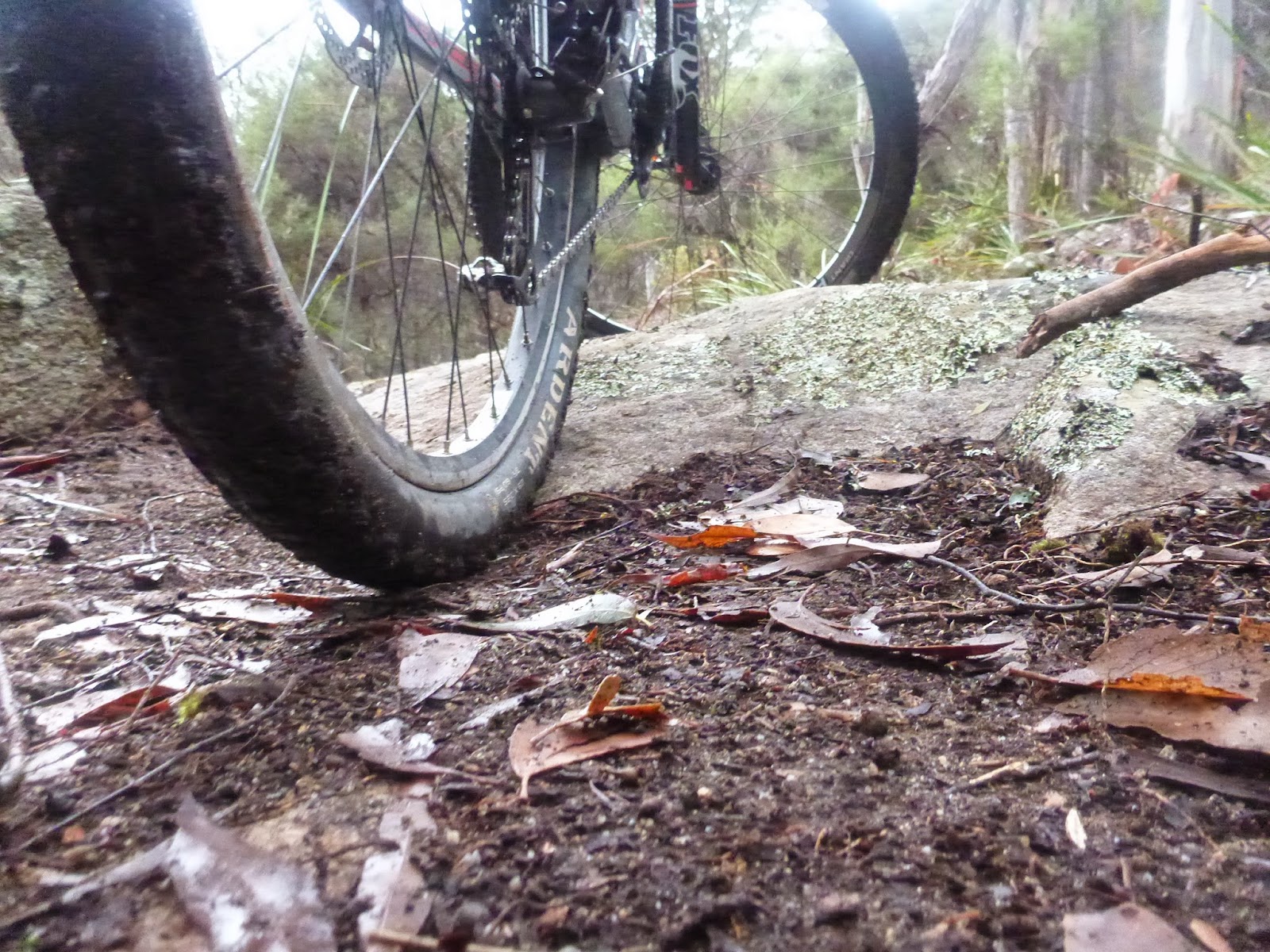 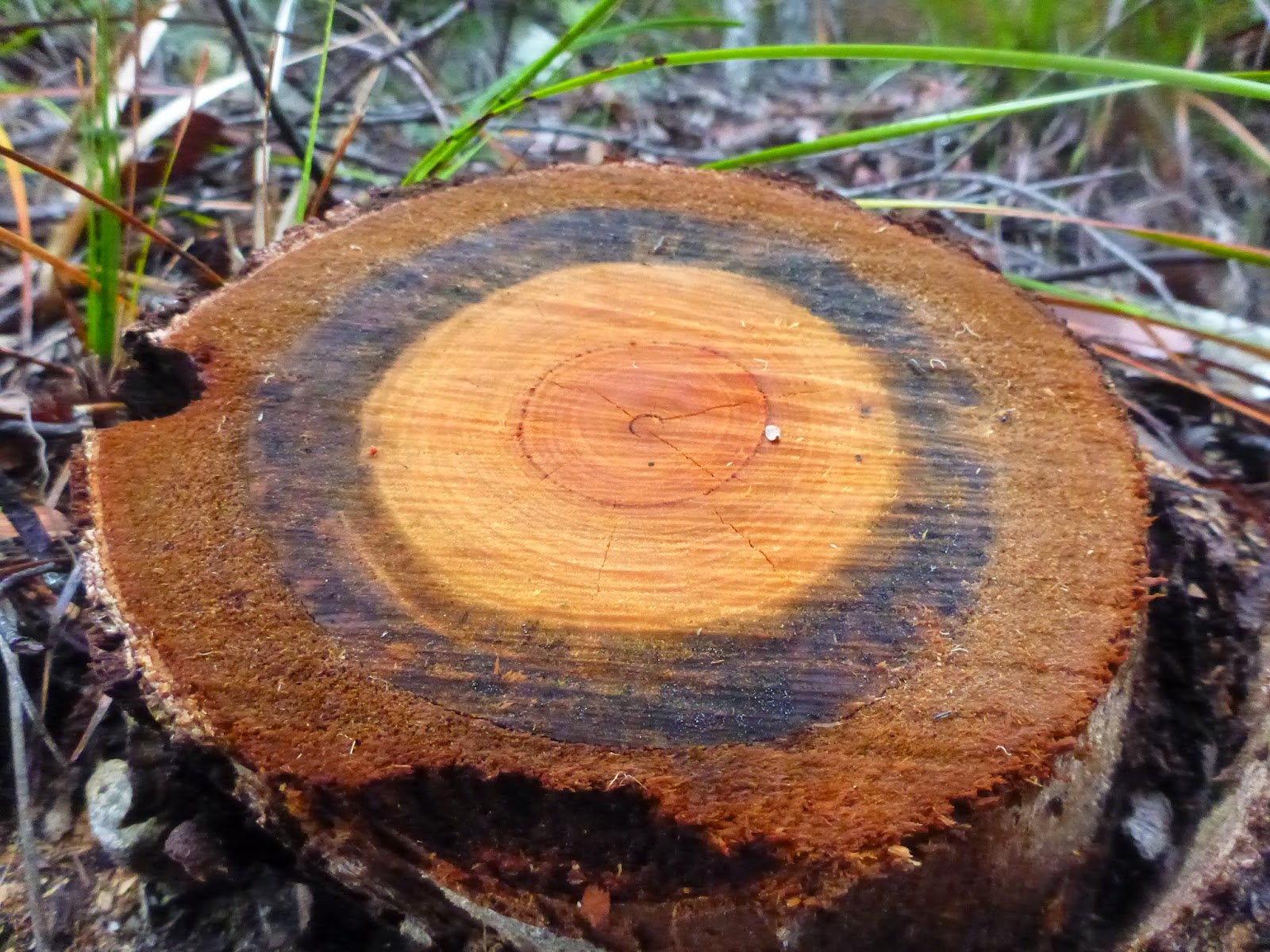 I actually went down a second time along this first section, but in the trails defense it was in part because I was taking it slowly, put my foot down, and went sliding off another rock.

Suffice to say I was happy to hit the old four wheel drive trail and escape what to me was a single track section from hell.

I wasn’t so happy when I realised why there was a feature called ‘heartbreak hill’ on the route.

I have ridden down this hill before on my way from Cascade Dam to the Derby Tunnel, and it is a great descent … but it sucks in the upwards direction if you’re unfit and not a good technical rider.  (tick, tick for me).

After pushing up Heartbreak Hill, and despite the fun, but sticky and sodden, switchbacks down to the top of the Cascade Dam, I was pretty much convinced that if I came up this way again, I’d just follow the road to this point and ride Dam Busters from here (at least I could ride that, and enjoy it). 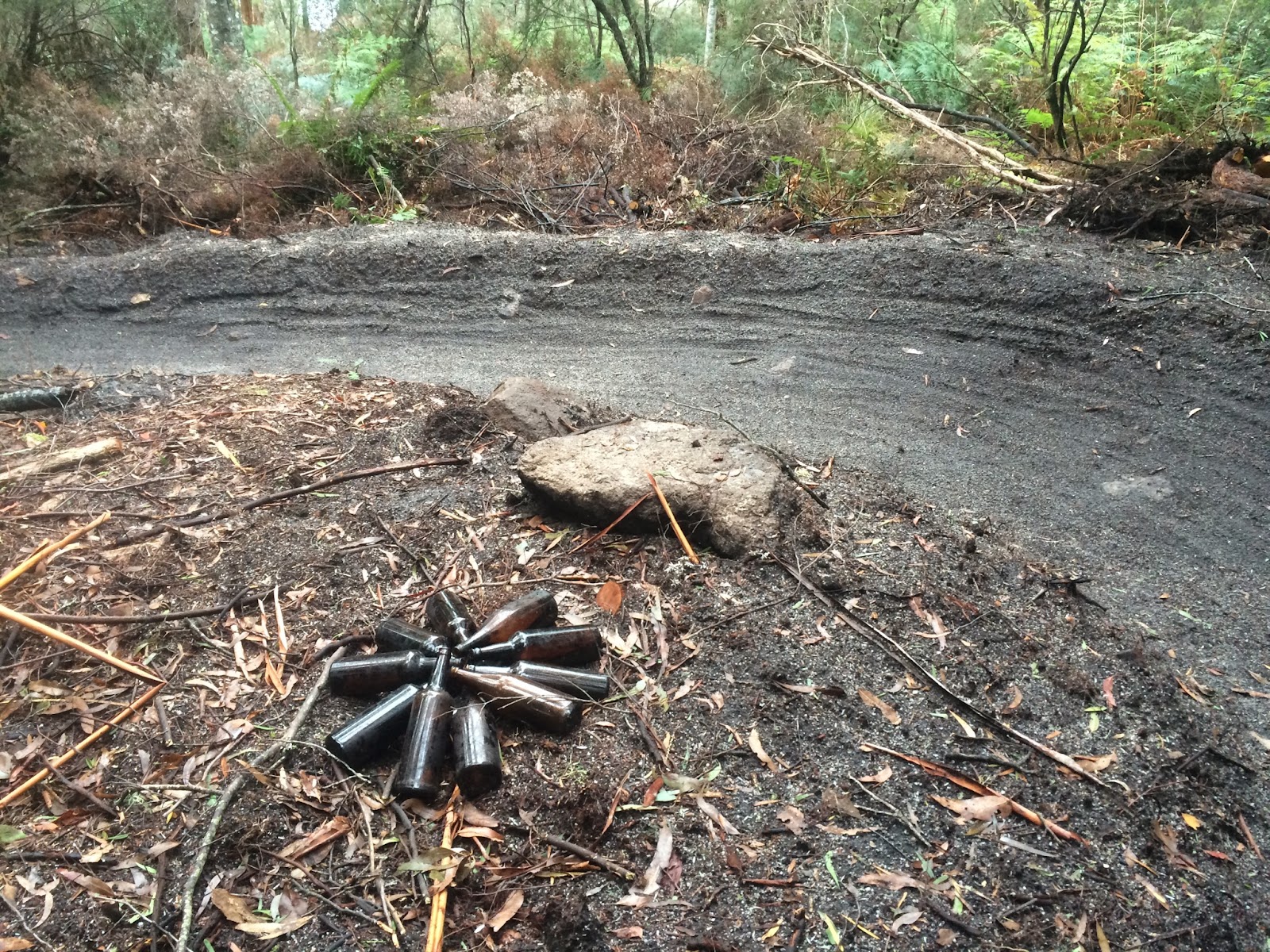 I was really glad when the trail rejoined the route I knew on the section of Cascade Dam Road which heads up towards the old Mount Paris Dam, but then I was a bit disappointed to find that all the track work had churned up this section  so it was just more muddy riding.

Now don’t get me wrong on this bit – If you’ve never been this way before you’ll still love it (See pics below), and I know the old overgrown feel will come back quickly, I’m just trying to convey what the trail was like for me. 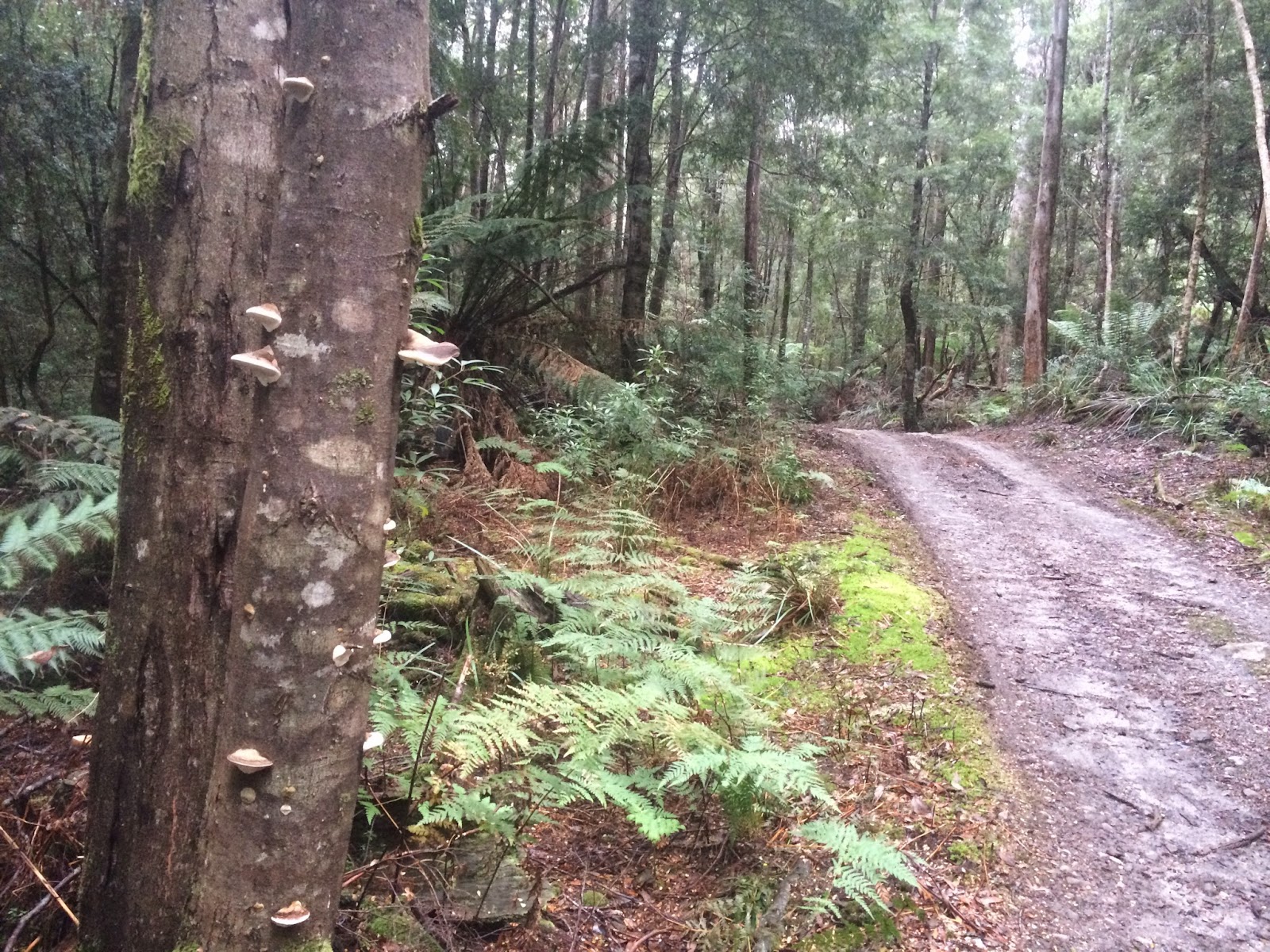 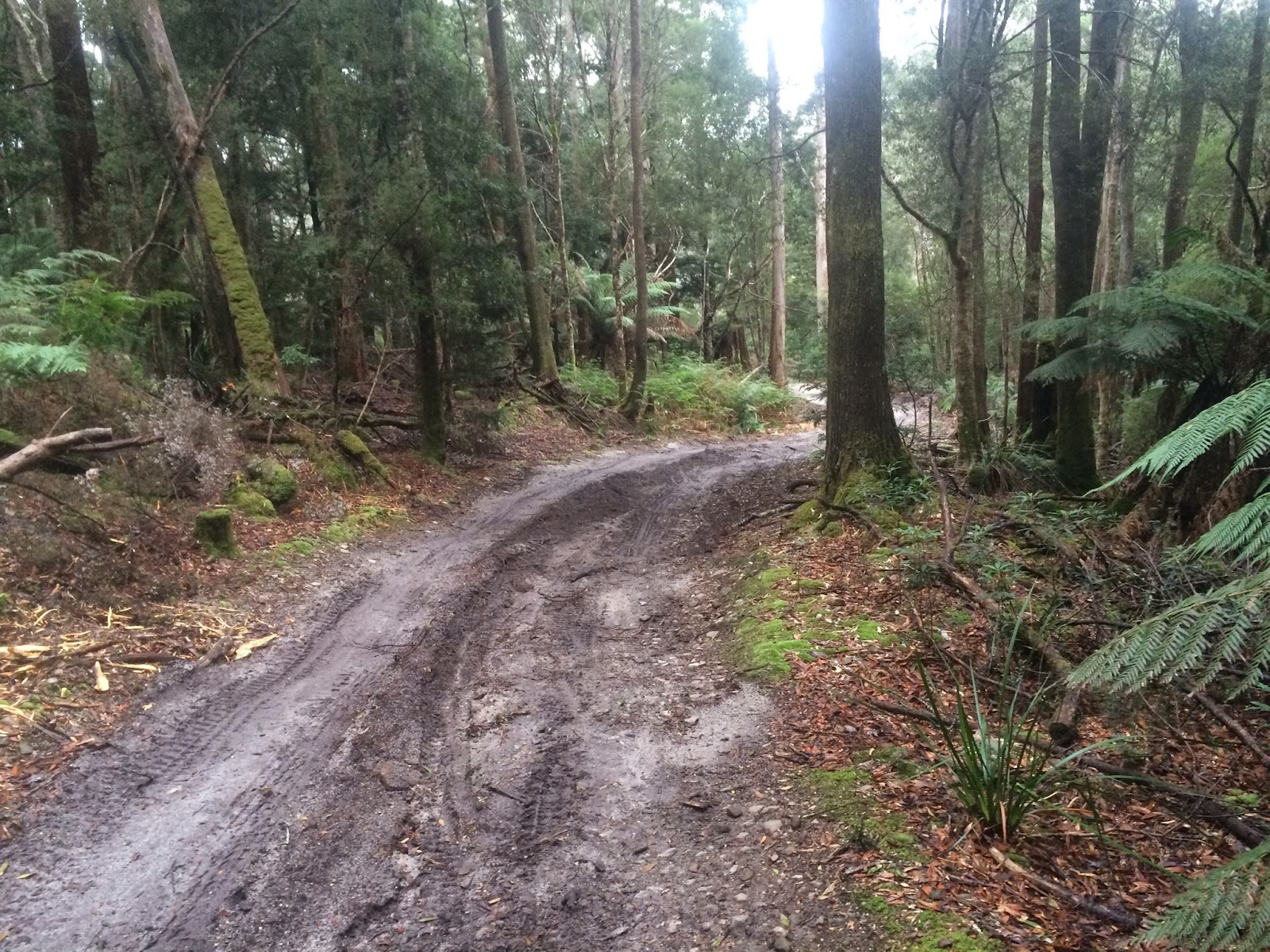 About two-thirds the way along the Dam, I was surprised (and pleased) to see the Dam Busters trail heading off to the left on a new single trail section.  Again, it was a nice section, but I didn’t find it to be anything special or brilliant like I did with Krushka – and when I rode it, it was quite wet and boggy. 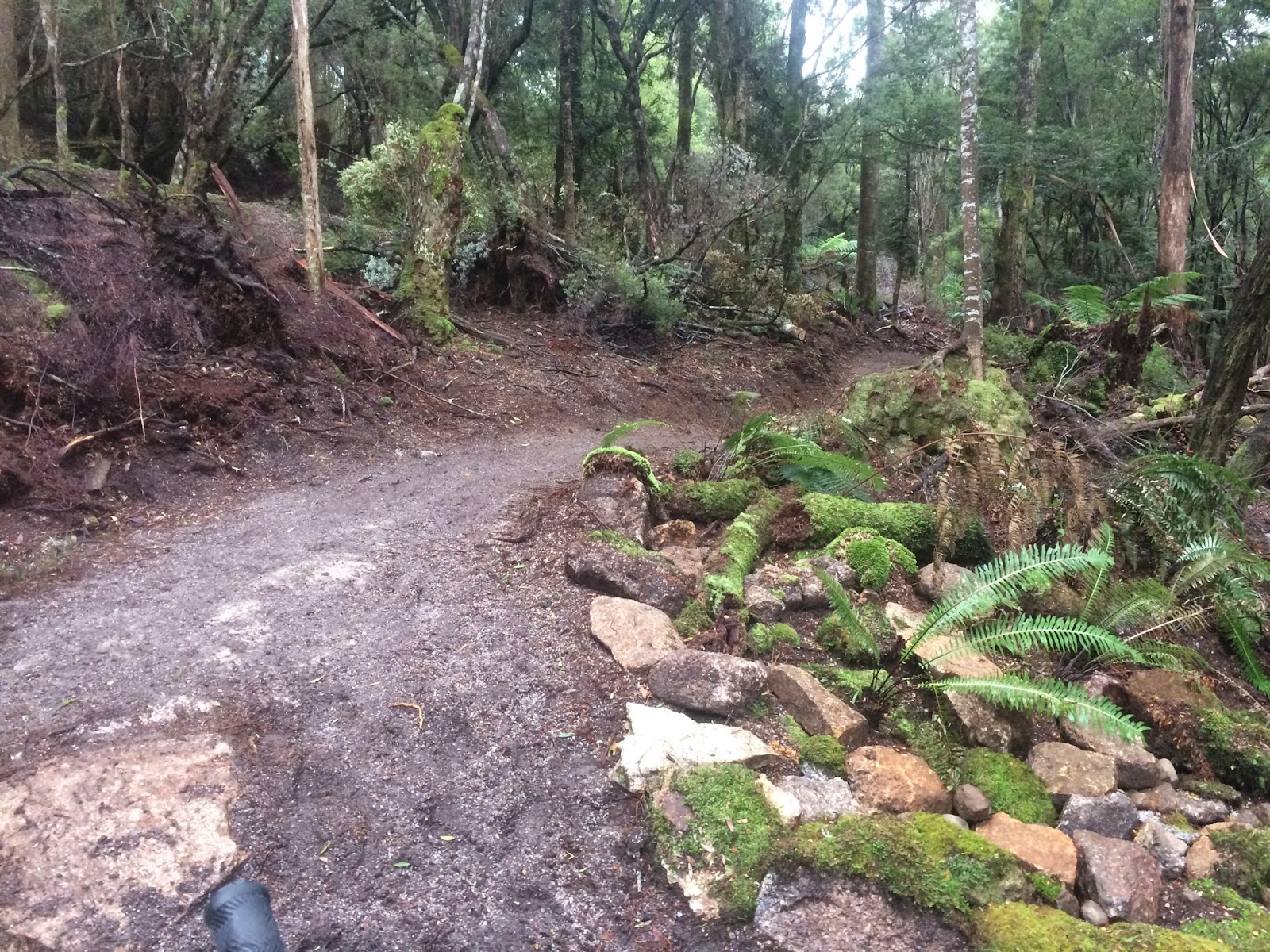 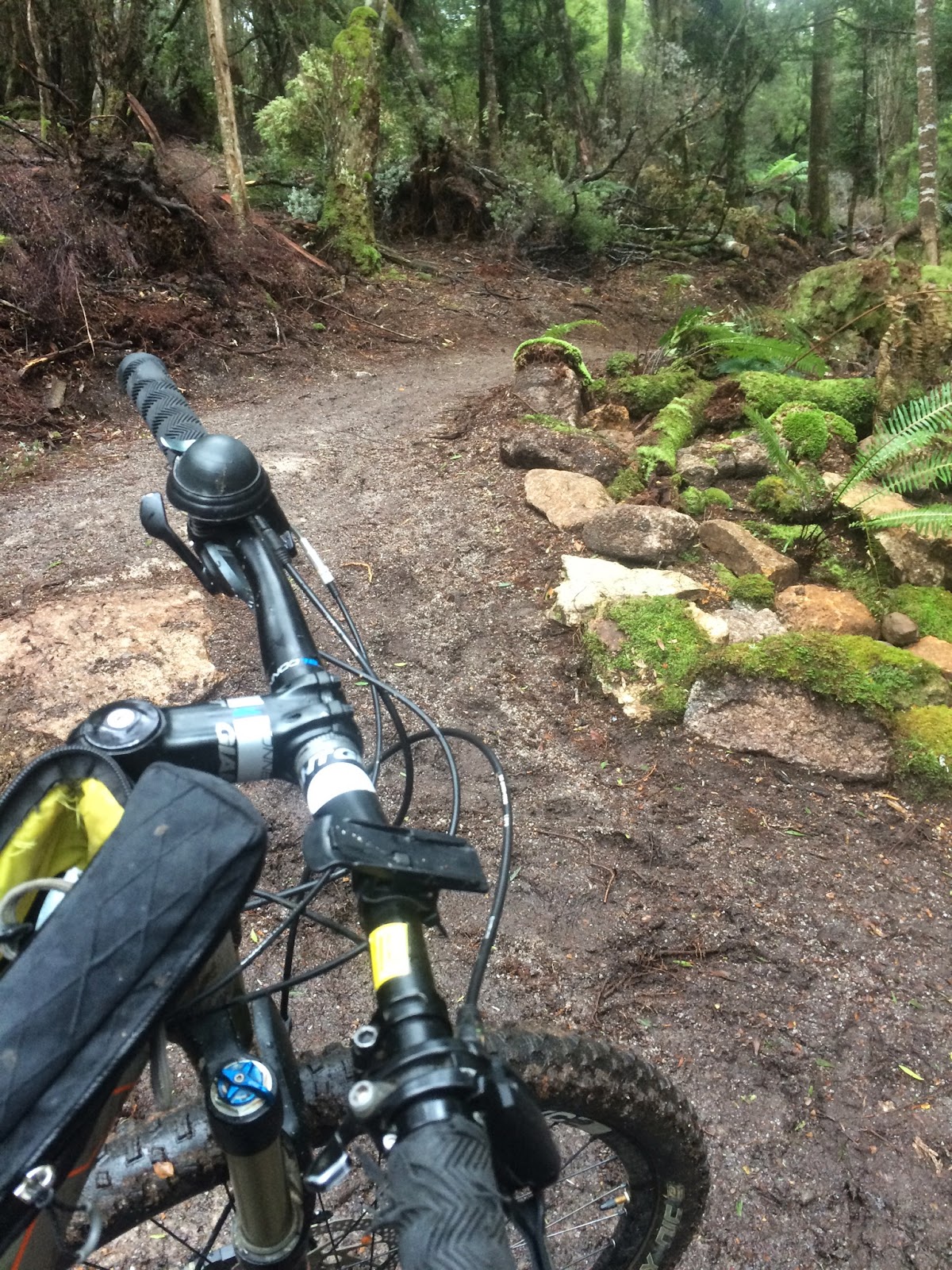 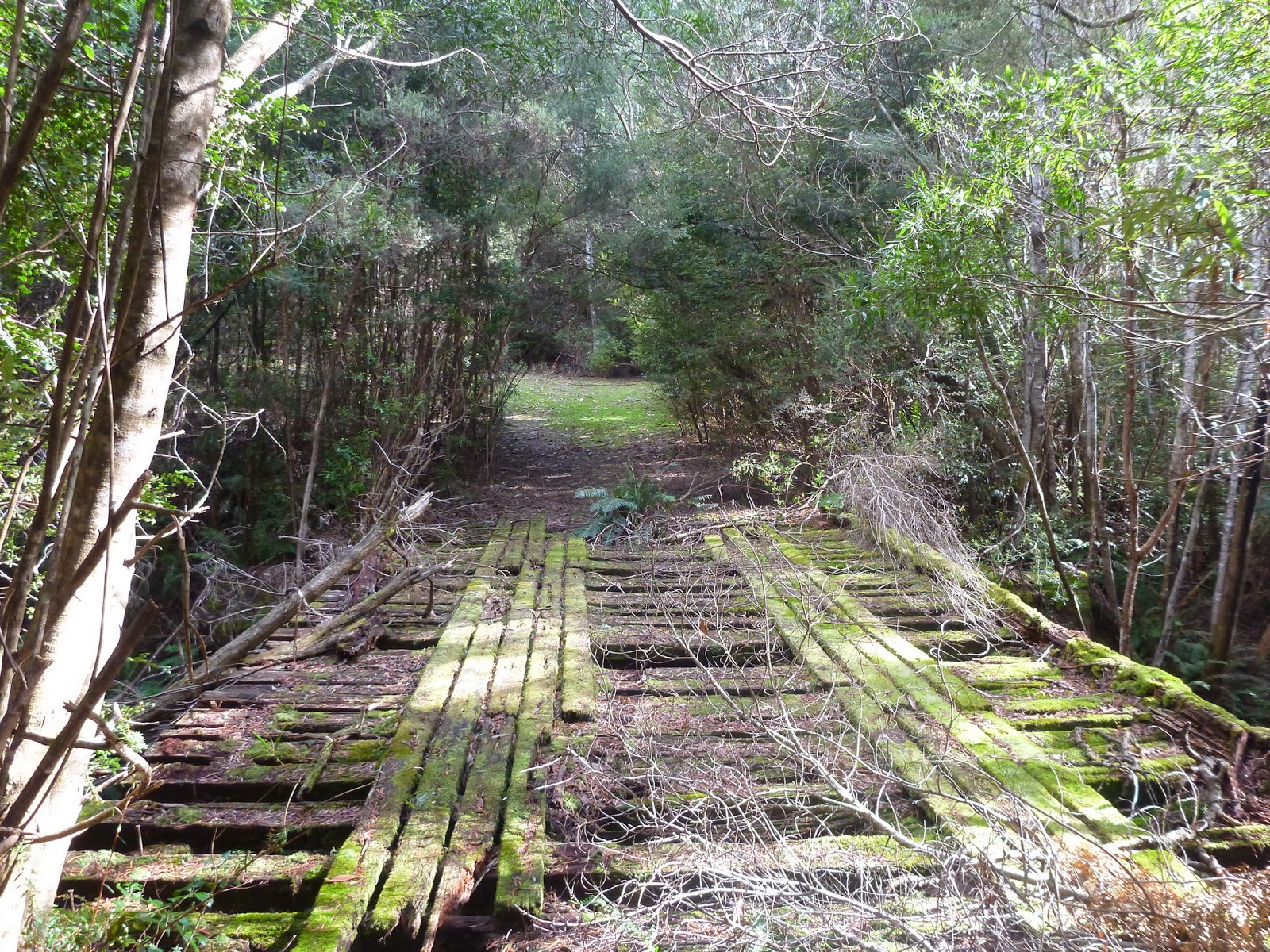 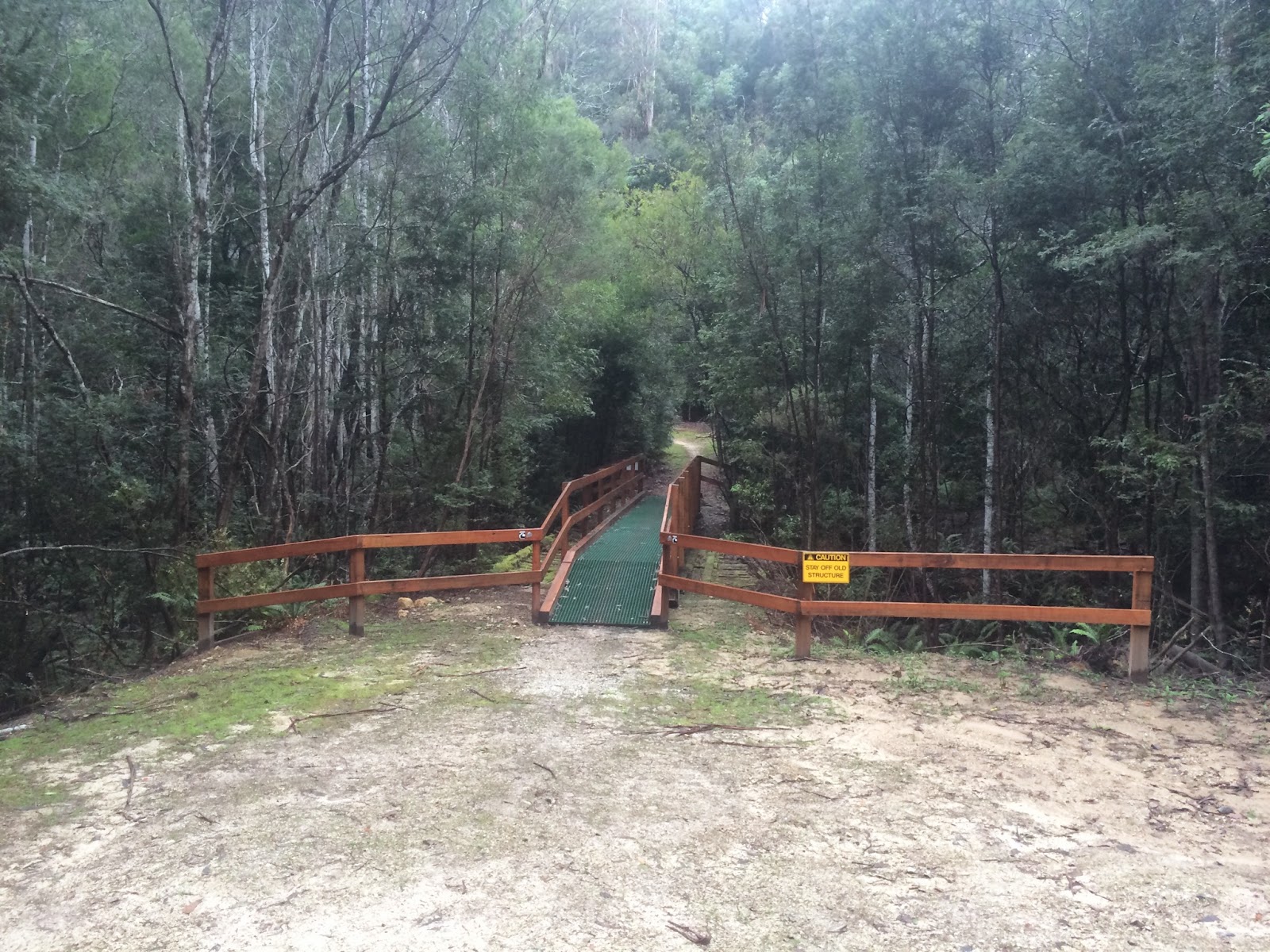 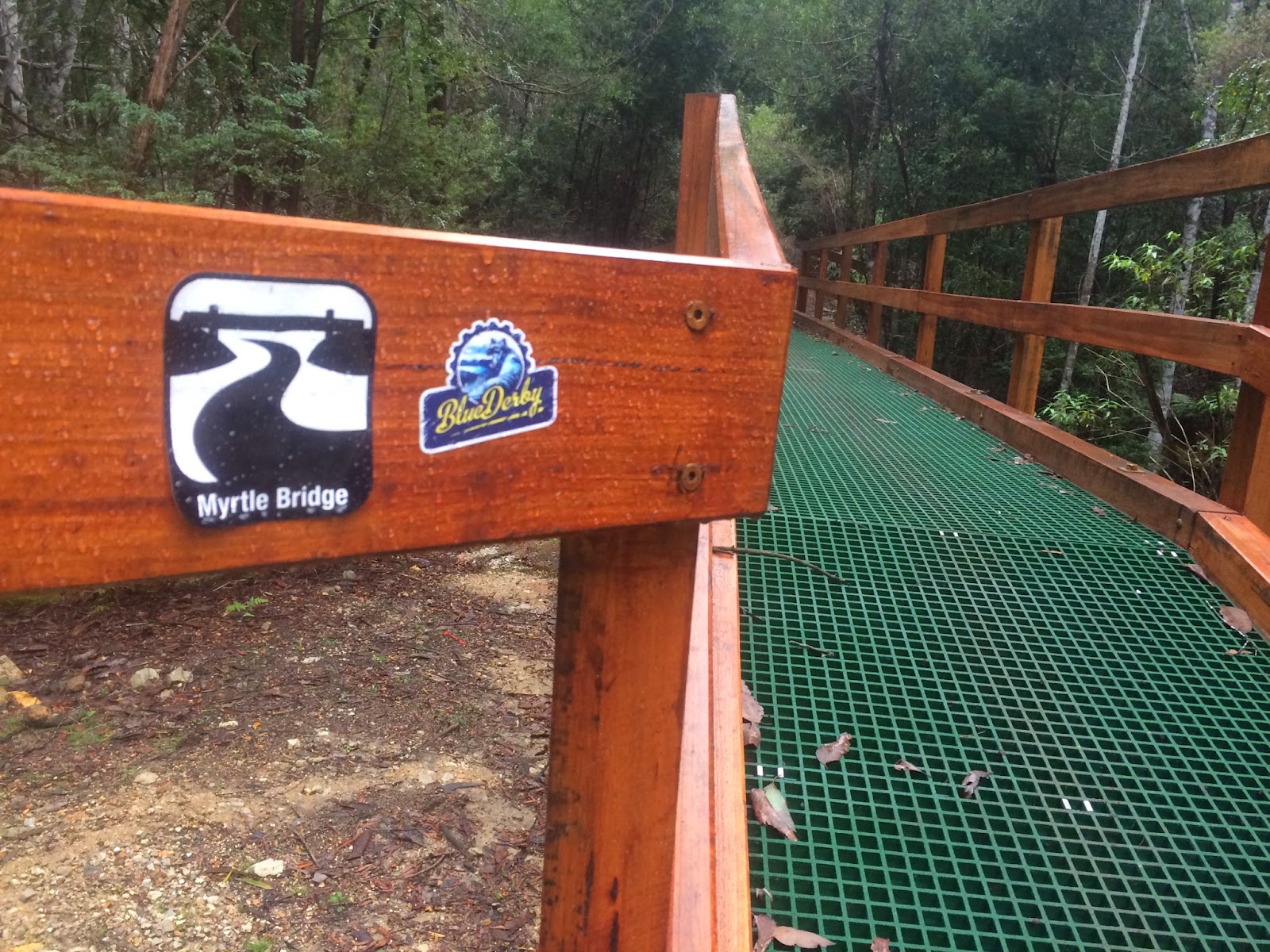 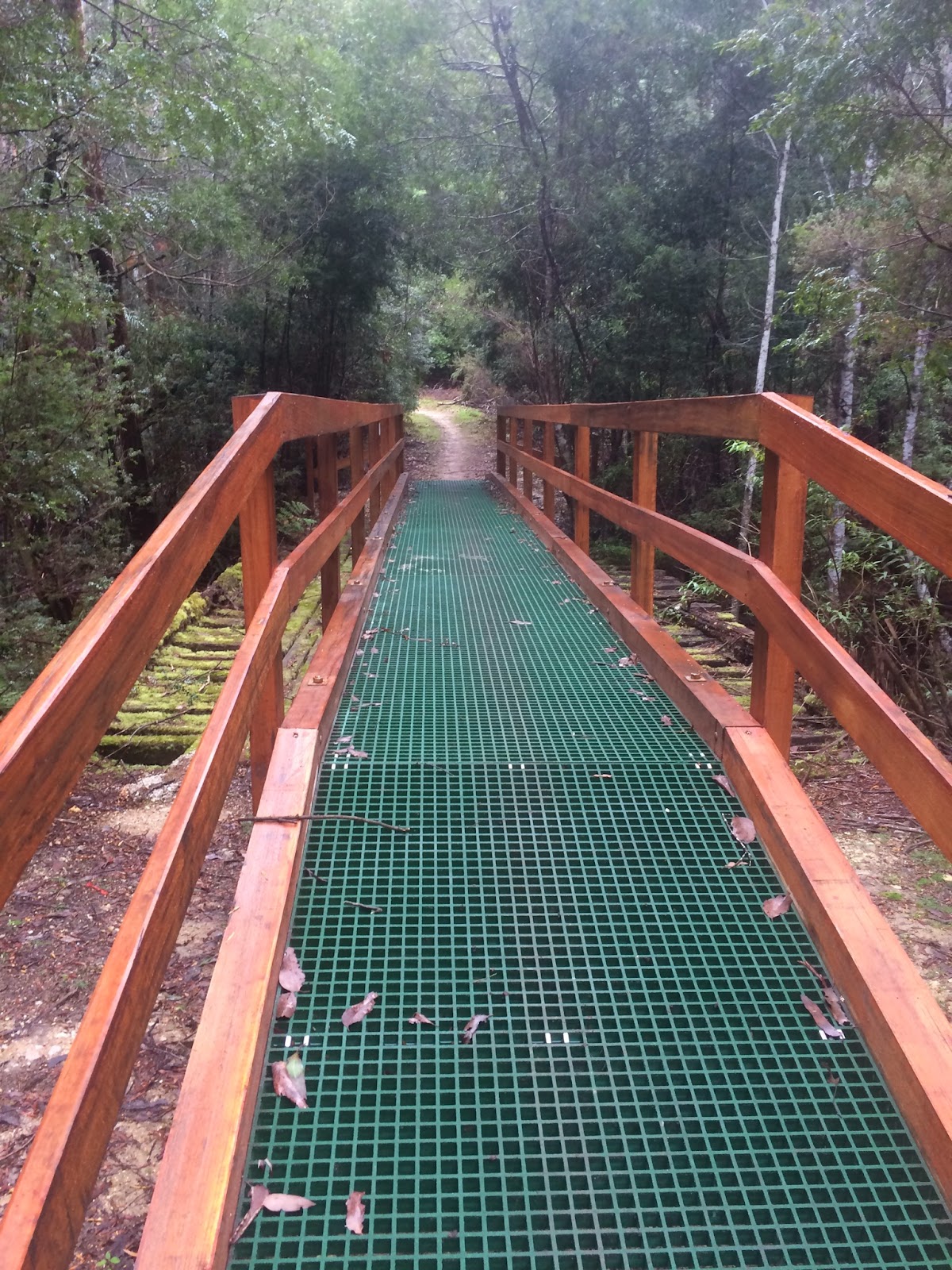 Again, really cool if you’ve never been there before, but for me – a bit of a loss.

Across the bridge, things really started looking up with some lovely trail for a few hundred metres.  But that’s all it was, after that it was back to a real mix of rough graveled and boggy sections and while I got the trail, I wasn’t loving it.  I think I was after more Krushka type riding.

Pretty soon the trail came out beside the lake, and wondering why they didn’t make a trail out onto the lack shore, I went for a wander out anyway …

Then I rode around the next bend and found myself at Sandy Beech (yes, it is spelt that way) which had lots of seats and resting spots waiting for tired riders … which explained the previous lack of track to the beach.

Anyway, it was while I was sitting here that I lost my crown as first rider official rider on the trail (sigh).

The next section winds along the side of the lake before climbing up, dropping down, and then climbing up again (but properly this second time).

I’ll be honest – after having had no dinner the night before, and no breakfast in the morning (there was nothing open or serving meals), combined with the fact that the riding was a lot more work than I’d anticipated, I actually jumped off the bike and pushed up a few of these switchbacks and was looking forward to the big descent which I knew must be coming soon.

Fortunately the track started heading downhill, albeit soon into the descent there was one junction (maybe another track extension under construction?) where I wasn’t sure whether to go right or left (go left).

The downhill ride is fun.

So much fun I didn’t even stop for a single photo.

But I still rated Krushka more.

Then, all too quickly, I emerged out onto the river (just above the existing crossing at the start of Krushka) and that was Dam Busters.

I was disappointed because I had expectations of more flow riding on easy trails, I had expectations of a more scenic ride than Krushka, and that’s not what Dam Busters is.  It’s offer a slightly more technical ride, it requires more effort and more skill (but still well within most people’s capabilities) but it didn’t offer me the ‘wow’ I was looking for and that I found on the other Blue Derby trails.

I do however get that Dam Busters offers those who rode the original Blue Derby trails and thought it was all too easy and unchallenging something slightly more fun to play with.

And I get that the Blue Derby trails have to offer something for everyone.

So I’ll call that my piece and walk away.

PS. I will leave you with this bombshell (it’s my reward to you for having persevered and gotten all the way to the bottom of this post) .. You know the 4 minute showers at the Trail head .. 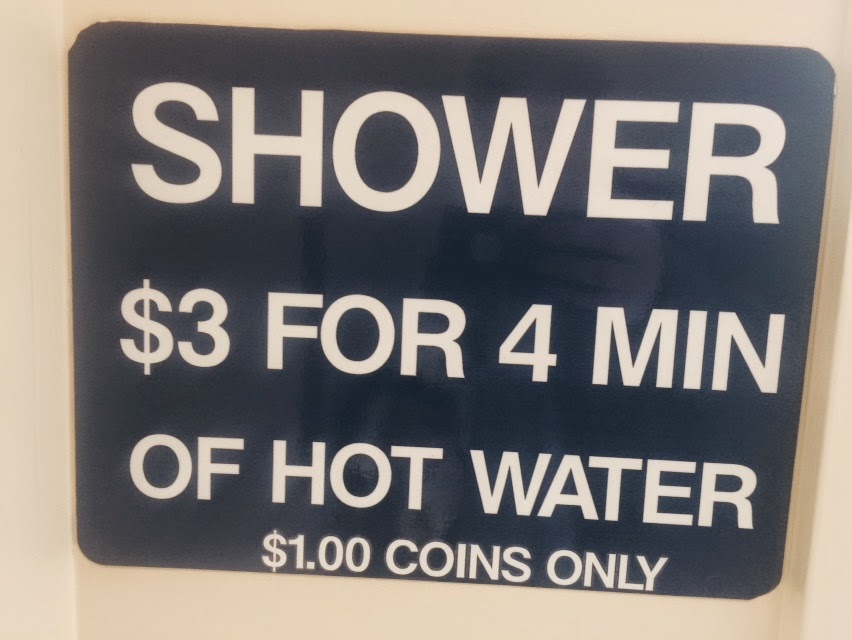 Well don’t believe that sign for a second, mine actually ran for 6 minutes 30 seconds (yes, I timed it).  The water even pulses on and off when you get near the end of the shower to let you know that you’re into the last 30 seconds.