I think I am unique amongst the mountain biking community in Tasmania  (and not for any of the rude reasons that have probably jumped into your mind).

I’m claiming uniqueness because I reckon I’m the only mountain biker in Tasmania that isn’t champing-at-the-bit to get out and ride the Hollybank Mountain Bike Trails.

In fact, right now, the idea of riding back up the Juggernaught sends shivers down my spine.

Yep, you’re not reading that wrong, I got to go for a ‘sneak peak’ ride on the trails today (all officially sanctioned) and it took me over 5 hours to cover the 30kms of trails.

That’s an average speed of 6kms/hr.

That’s slower than most people walk. 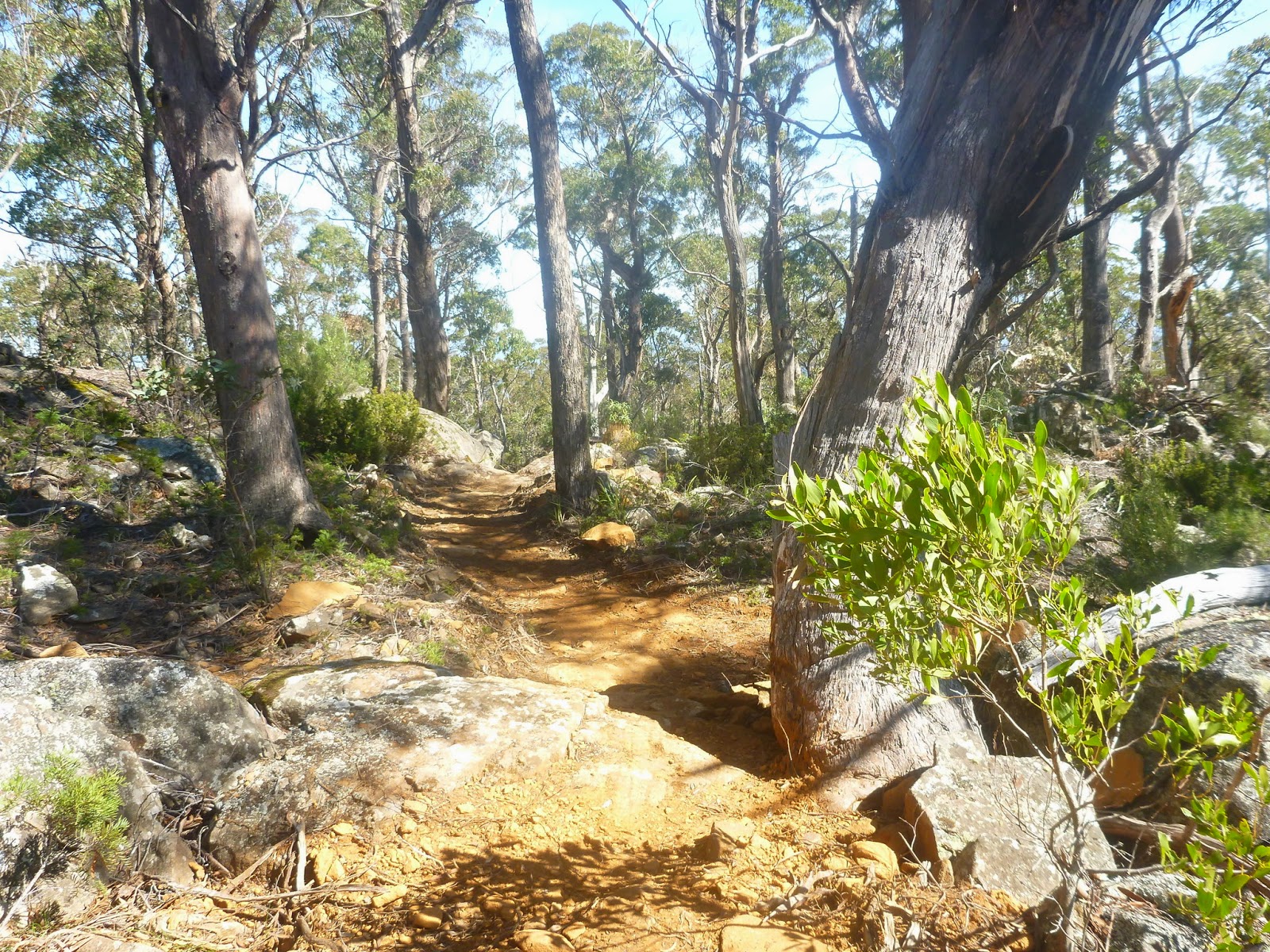 So, if you’re anything like me, you’ve been eagerly following the construction of these trails and  reading the track descriptions put out by Dirt Art.  More recently you’re probably been ogling the  photos posted by the Flow riders (who rode the trails the same day I did) and you’re thinking “I want on those trails“.

If so, then you can imagine how excited I was when I pleaded my case for an early ride on the trails  … and got the nod to go ahead.

If you can’t, then my excitement was around the 9/10 point on the excitometer scale.

After getting a safety briefing from Rob at the trail head (it is a work site after all), I set off around the green (beginner) “No Sweat” loop that pretty much follows or parallels the old XC course around Hollybank Reserve (if you know it).

You can see from the photos above that it’s all wide, gravelled, IMBA green, riding, but don’t let that put you off riding it as it was a lovely ride (albeit that about a third of the route didn’t have a surface on it when I rode it).

It will make a great little beginner circuit as well as a nice option for families or more casual riders to add a ride to any trip to the reserve.  For reference it was 4.6kms by my GPS.  Not sure if there will be hire bikes there, but I believe you can hire bikes back in Launceston (check out Ride Tasmania’s Bike Hire page)

Well it’s on the green trail if you want to ride it.

Now because I was there before any signage was installed, and because I’d been told that I’d see the blue loop (Tall Trees) heading off from the green loop, I started to get a bit concerned when I found myself almost back in the car park where I started with no recollection of seeing the blue loop heading off.

Not wanting to interrupt Rob who was busy on his excavator (OK, more honestly I didn’t want to appear like an idiot who could’t navigate his way around the most obvious of trails), I figured all I needed to do is head back the way I’d come until I found the trailhead … so I headed back the way I came (well maybe I headed down ecology track thinking it may be down there) and pretty much rode most of the way back around to the tree top adventure building trying to find the trail.

But I couldn’t find it, so then I did something novel and asked one of the track crew where the blue trail was (“Hi, my name’s John and it’s been 41 years since I’ve asked anyone for directions …”).

After making sure that I was allowed to be there, I was happily told that the blue track actually heads off back at the McNeill Buildings car park near where I turned around, and sure enough not 10 metres past where I turned off down the ecology track … there was the Tall Trees trailhead.

I think that was the first hour gone.

Things changed the second I turned down onto the Tall Trees track. 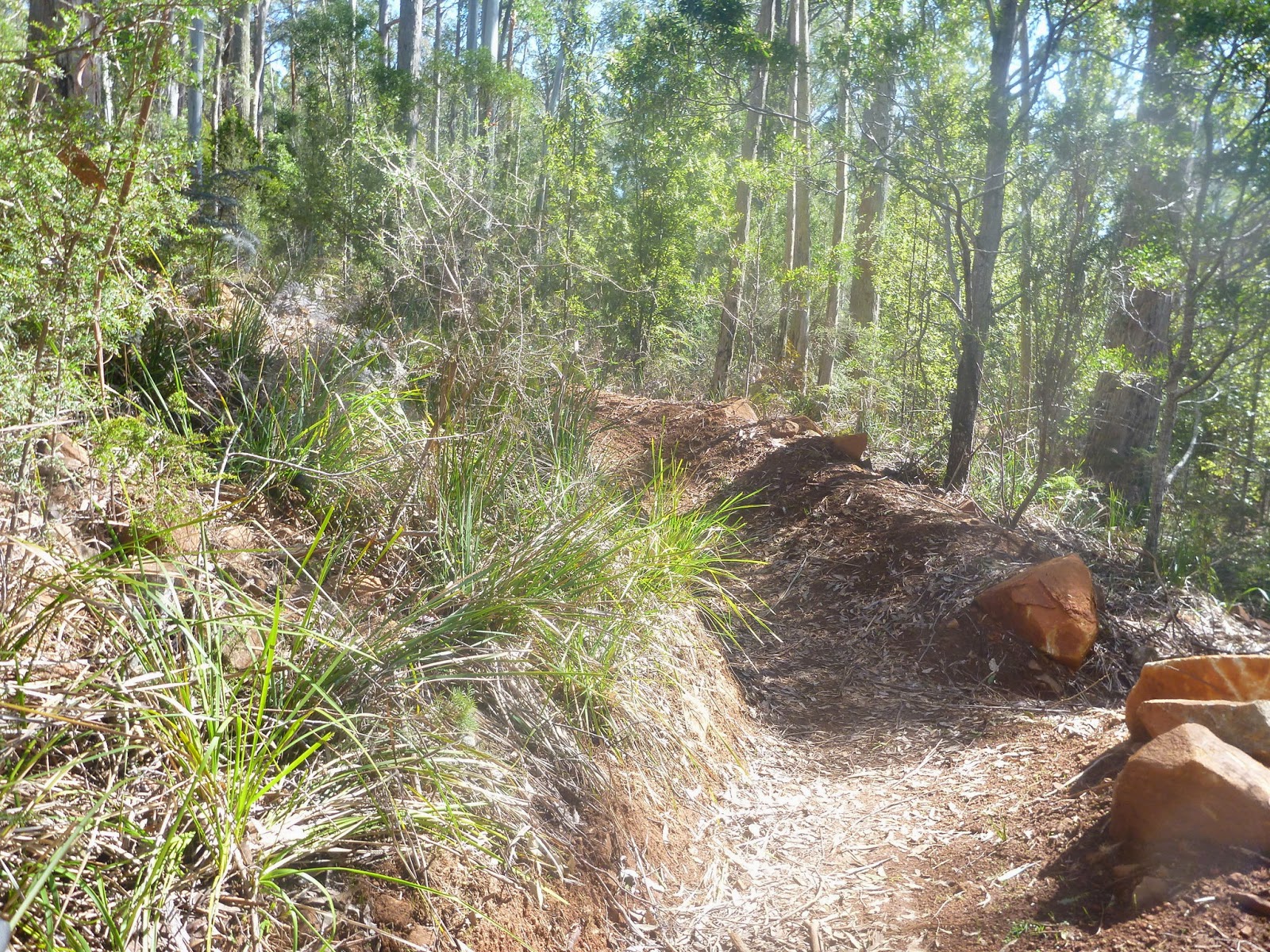 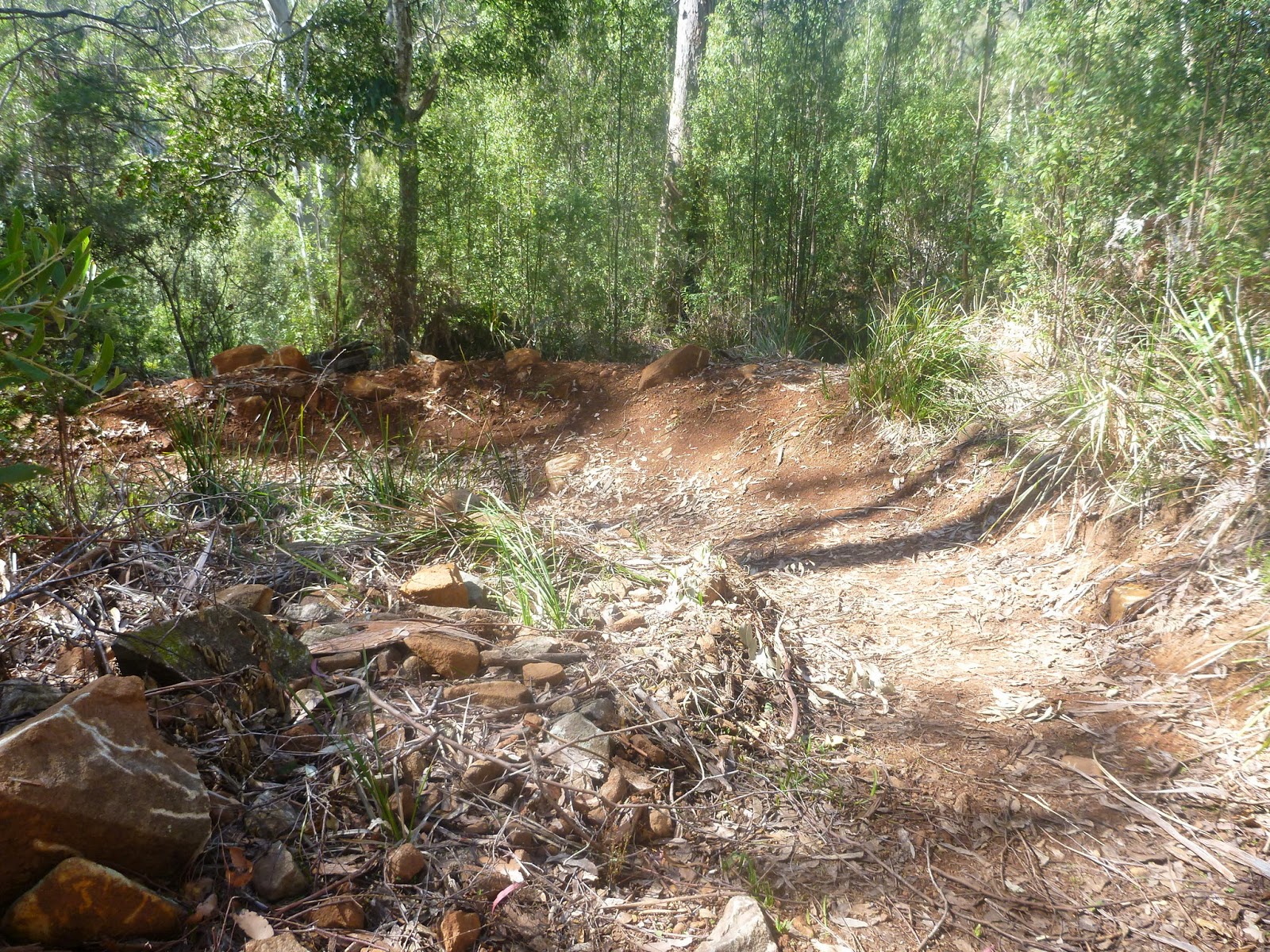 You then drop out at a beautiful little river (no idea if they’ll build a bridge here, but I got wet feet crossing it) which the track then follows before switch-backing its way up away from the river and to the junction of the Juggernaught (approx half way, so 2kms, down the “Talls Tree” track). 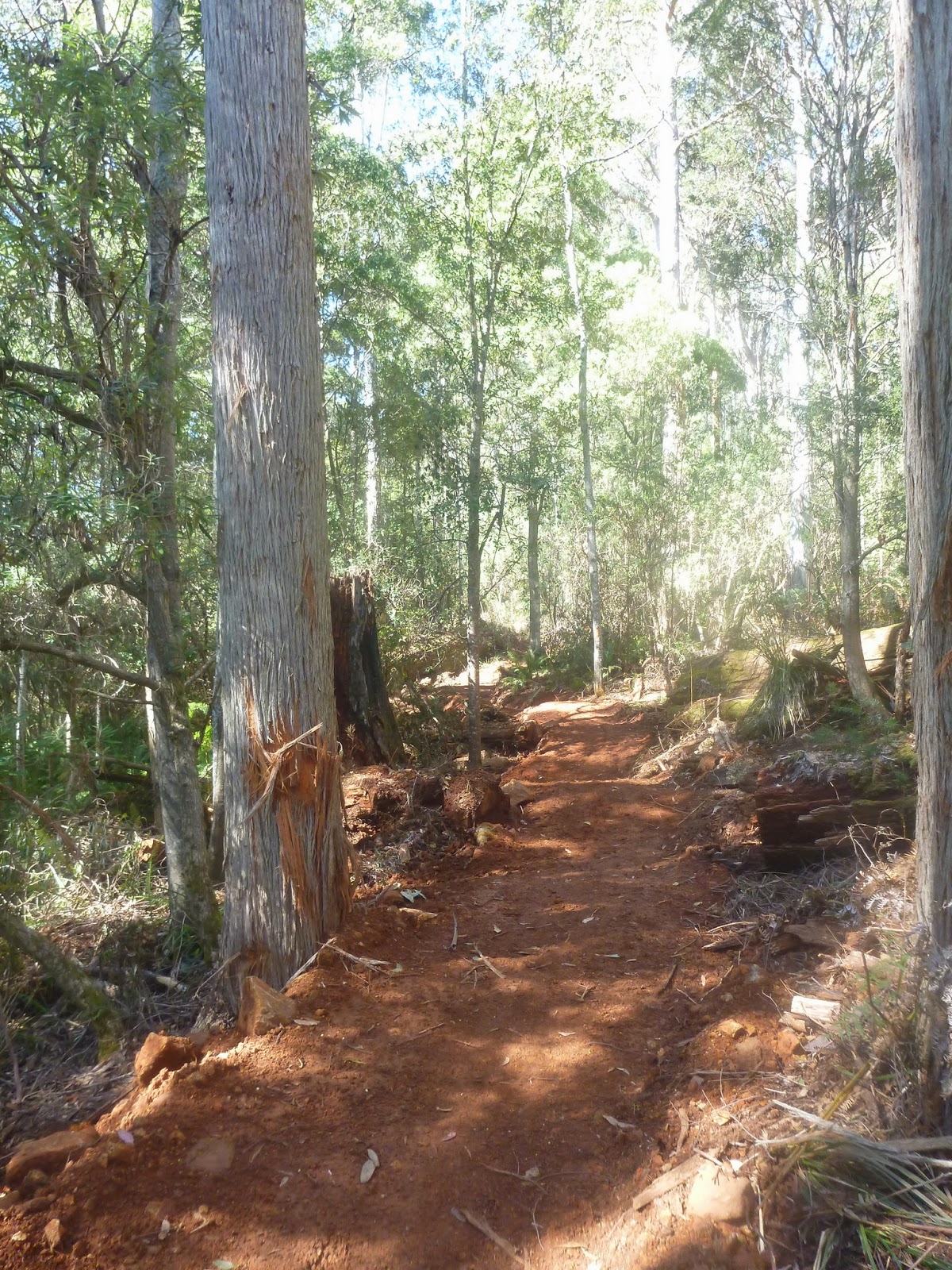 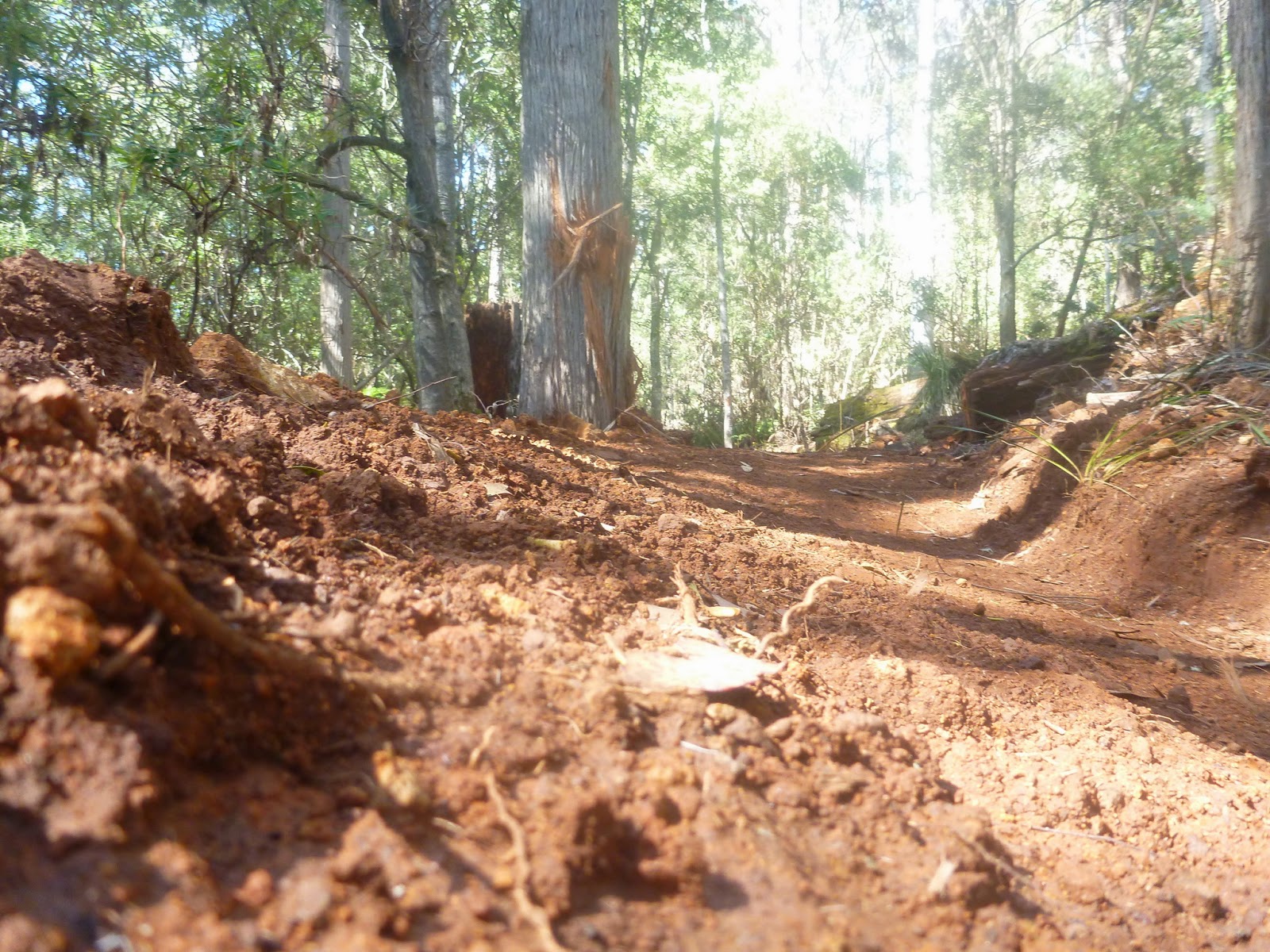 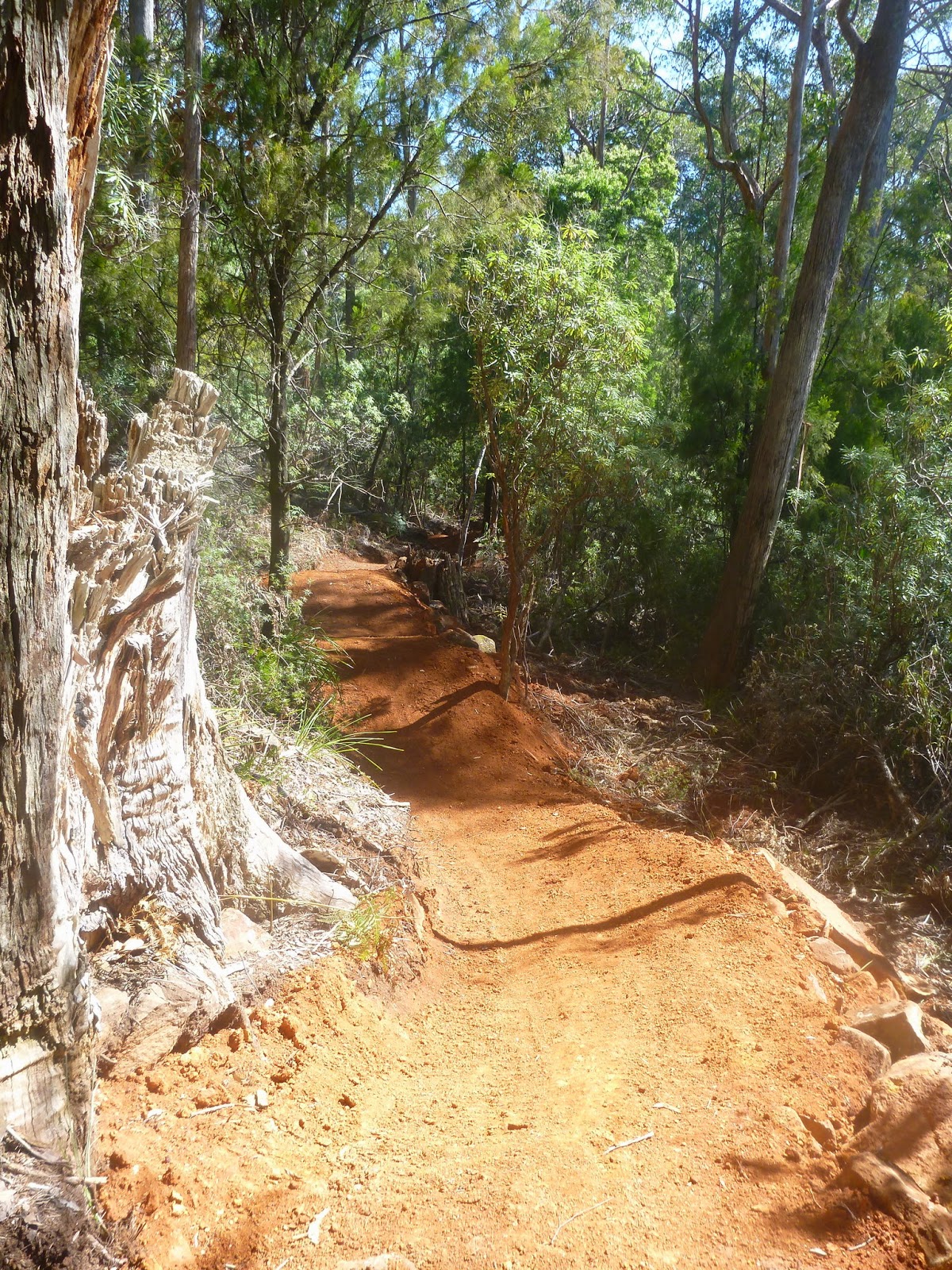 And that’s when things really departed from the plan.

The Juggernaught trail is unlike anything I’ve so far encountered in Australia, and it’s not a trail to meet unawares (like I did), especially from the bottom with the intention of riding to the top whilst it only has a half finished surface on most of it.

When I’d set off from the car park earlier in the day, I’d figured: “30kms, including 5kms of green track and 10kms downhill  … I’ll knock that over in 2 to 3 hours, no worries” so I’d set off with half a litre of water and a chupa-chup in my backpack.

Oh how the Juggernaught must have been laughing at my approach.

I noticed in the track notes just released for the opening day that it says to allow 45 minutes to an hour to ride to the top of the Juggernaught.

Well, it took me just over two hours (which is probably about right, given I usually take twice the time of the elites when racing), to get up the juggernaught, and I reckon I must have been pushing my bike 80% of that time.

Now most of that is down to me and my poor fitness (and a little bit to the fact there was a lot of trees and other stuff blocking the track to stop illegal riders) but the juggernaught is essentially a downhill track which has been designed so it can be ridden uphill.

That doesn’t mean that it is any fun riding it uphill (though several of the track crew were telling me about how much fun they had riding up it, so just remember this is coming from me and you may love it).

What the Juggernaught is not, is a smooth, switchbacking, easy gradient ride (like the blue loop) that I was expecting.

Sure, I could probably ride 80% of the juggernaught, but the problem was the bits I could ride were usually no more than 20 or 30 metres long and were interspersed with drops or jumps that were just that little bit to steep for me to make it up.

After a kilometre or two of stop/starting the whole way up, I got sick of it and just decided to push …

Pretty much the whole darn way …

It’s a long, long push when you don’t know where or how far the end is away, and the whole way up I just keep telling myself that this track had better make sense in the other direction because (water and energy deprived) I wasn’t having a huge amount of fun pushing up the track.

The other (slightly) frustrating thing going through my head was that I knew that there was a road I could ride up to the top of the trail … if only I knew which road to ride up and where to ride to.

But I didn’t know either of those things at the time so had no choice but to follow the trail.

Finally, after pushing and riding around a recently logged area and then up a nice ridge, I finally got to the top of a rocky knoll, headed down the other side and out onto a road with no apparent track continuing on.

Then I rode back down the road to a junction … no track.

Then I texted Rob and got the perfect response: “Sounds like you’re at the top“.

Which meant it was time to head down.

And, yes, from that point onwards all those jumps that I hated so much on the way up started to make sense.  Even a rider as technically incompetent as me was able to use the flow of the trail to just whiz down most of the track and through what were some quire reasonable intermediate grade riding.

It was a blast.

It would have been much more of a blast if I wasn’t so stuffed and dehydrated by the time I got to the top.  I knew I was cooked when I got back down to the last kilometre of the juggernaught just before it rejoins the blue loop and found myself pushing my bike up little jumps I should have been able to fly over.

Five hours after departing, I finally rolled back into the car park tired, overjoyed to see my car (and more importantly the cold drinks it contained), and somewhat emotionally conflicted over just how much I did, and did not, enjoy riding these trails.

I really liked the two lower circuits, and once they settle in (remember they were still under construction when I rode them), I reckon they’re going to be gorgeous to ride through as well as fun to ride.

My conflict (when I desperately want to do nothing but sing these trails praises) is that I’m someone who likes to go “bushwalking on two wheels” when I go riding, and the Juggernaught isn’t built for someone like me,

With that said, I come back to what I said at the top of this post – I’m pretty unique when it comes to mountain biking tastes and I’m not a ‘technical’ (or fit) rider, so the fact that the Juggernaught might not be my cup of tea, probably means that all of you normal, fit, competent riders are going to love riding these brilliant quality challenging trails (like the Flow guys do) … It is going to make an awesome gravity enduro course.

I suspect the Derby trails are going to be much more to my liking in this regard, but I will come back to Hollybank after the trails are ridden in a bit.

I’ll just pay for the shufflle next time.