I woke up this morning with three thoughts slowly percolating  through my head … why did I think it was a good idea to see what an electric boundary dog collar feels like when the dog tries to escape?

Was that before or after we decided that single malt whisky and diet ginger beer was one of the most awesome mixers ever discovered, and finally …

… and most worryingly … did I really allow Kath to apply a fake tan to just one of my legs last night?

For the record, dog shock collars really work and I have no idea how dogs can wear them and still escape, believe it or not I still think that whisky and ginger beer is a good mix (but I did try that after several bourbons and quite a few bottles of wine)  and yes, unfortunately, I did have a fake tan on one of my legs.

This unfortunate series of events could only mean that I was either having a very bad dream … or that it was Kim’s birthday … and we were back up at the Gold Coast celebrating it with the Monsters. 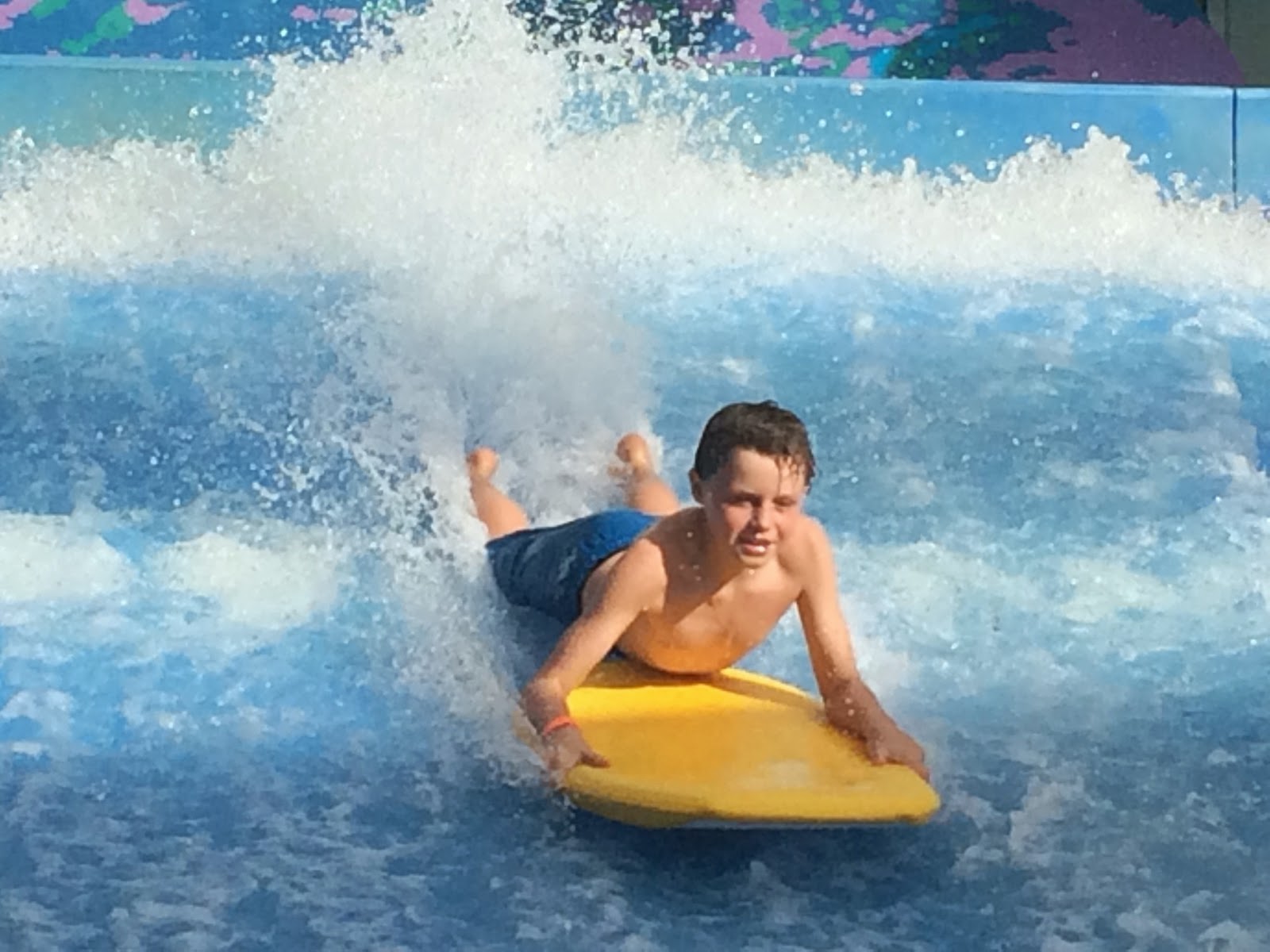 Well that’s not 100% true … we actually spent most of Kim’s birthday getting from Hobart to the Gold Coast, and singing happy birthday to Kim at every opportunity.

She liked that, (the singing) and I could tell this because she has this look that says “I’m pretending that I’m throwing you out of this aeroplane” which really means “thanks John, I love your singing” and she put that look on her face a lot that day.

What’s probably more surprising is that despite my many renditions of “Happy Birthday to you”, Kim’s birthday didn’t actually start that well: after we got through security at the airport,  I presented her with three blank envelopes for her birthday … the catch being that she could only choose one of them as her birthday present, and she had to do so without knowing what was in them.

Now you see I did this because Kim had (boringly) asked that I just take some money off what she still owed me for her bike, and because this was boring, and I really don’t like boring things, and because I know that Kim secretly likes it when I devise complex and clever ways to make boring things not boring … I devised this clever plan.

In one of the envelopes I put a (boring) voucher for $250 off her bike.  In a second envelope I put a second voucher for the same amount of money … but it had to be spent on the Gold Coast in the next three days (exciting) and in the third and final envelope … I just put $100 and lots of ‘loser’ messages (very exciting … at least for me).

Sure enough, and much to my delight, Kim chose the third card and I realised that I’d just gotten away with the cheapest birthday ever.

Much less to my delight, Kim, without my permission, then picked up a second envelope and opened it and discovered the $250 off the bike voucher and decided that as it was her birthday, she’d take that instead.  Just as I was beginning to disagree with this contention, she then opened the third envelope and decided that $250 to spend was a much better idea again and so she decided she’d take that.

I guess I should just be grateful that she didn’t think to demand all three. 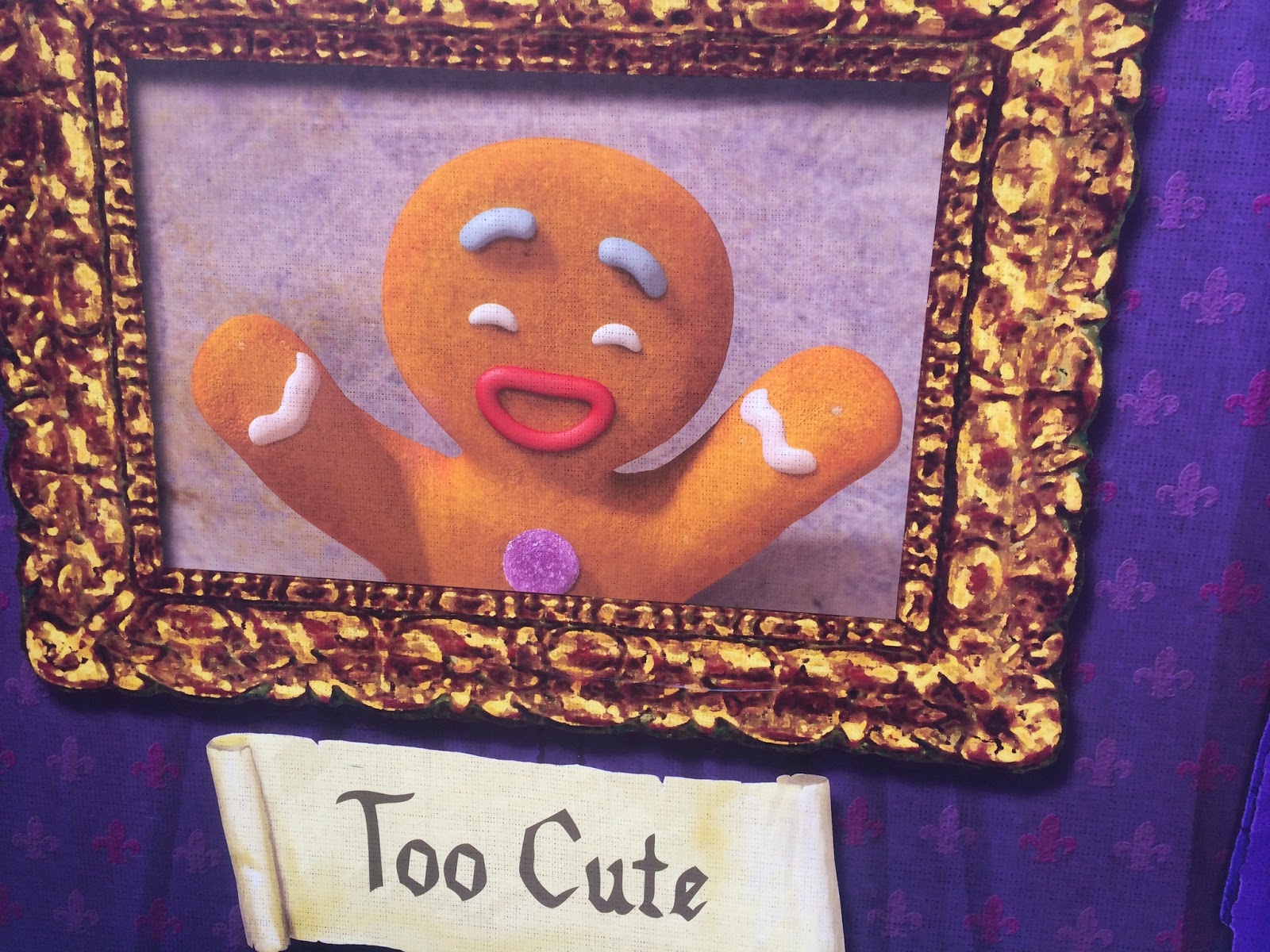 Karma gets us in many ways, and for Kim her present stealing affair was paid back in the quality time she then got to spend answering the million and one questions the monsters had to ask once we got on the plane.

I was safely seated over in another row (reading my latest trash zombie novel) and was only half listening to their endless stream of questions, but I particularly liked the sequence of questions that started with the rather reasonable question  from Markus “What would happen if the window cracks?“.

Yes, that is why they are called monsters, not children.

===========
In case you’re wondering, the answer to the question “How long did it take the monsters to get into the pool after you got there?” 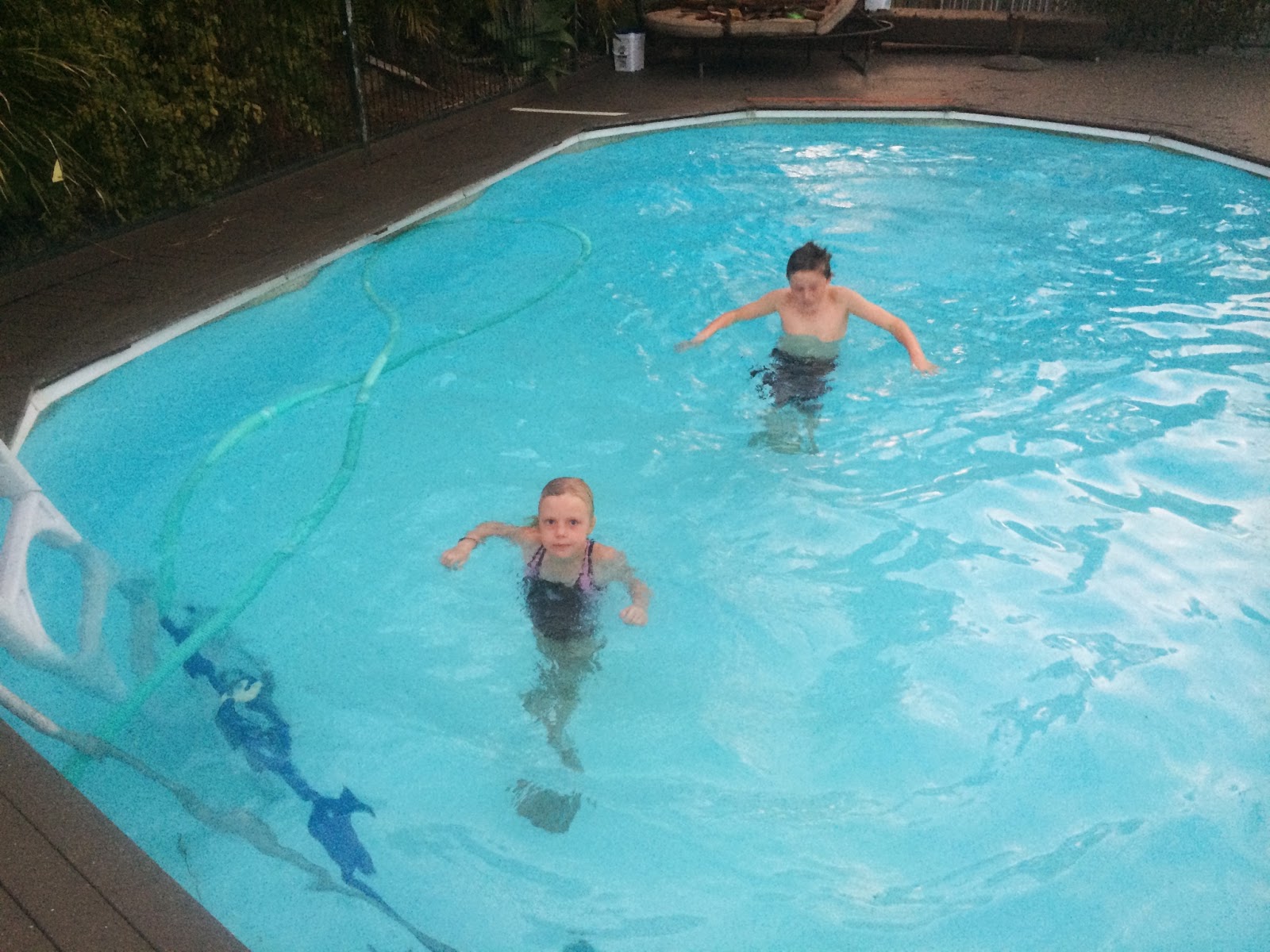 … was 17 minutes … but I think 15 minutes of that was because they were hiding in their room too shy to come out and meet all the ‘strangers’ in the house.

Two minutes to get changed and in the pool … that’s class, Tasmanian class.

===========
Three days before we flew up to the Gold Coast, Kathie (my sister who we were staying with) drove herself into a medical clinic as she was struggling to breathe.  She was soon in an ambulance on the way to hospital with a partially collapsed lung.
Despite three days and two nights in hospital she still went out on Saturday (after our drinking session) and did a tough mudder challenge and then went out again on Sunday and ran in a park run,

When I go to her funeral in a couple of weeks, I promise I will ask to give the eulogy at which point I will bring up her Facebook page on a big screen with the hundreds of comments telling her to rest and take it easy and for her eulogy, I will type in my last little comment which will say

===========
As we’d gone and visited Movie World, Seaworld and Wet and Wild last time we came up, this time we took the kids to Dreamworld and White Water World (which are adjacent to each other) and we spent two full days having a ball.
Mind you it didn’t start well … at the very first ride of the first day (which was an extremely tame raft ride) both Markus and Zara were swearing that they didn’t want to do it, it was too scary, it was too big, the que (which was non existent) was too long etc. etc. etc.

We almost left the theme park then and there …
Fortunately, by the end of the two days we had them both up on the tower of terror and sliding down all the big thrill rides in white water world …

May is a great time to visit as there were absolutely no queues and it was still warm enough to spend time in the water (just). 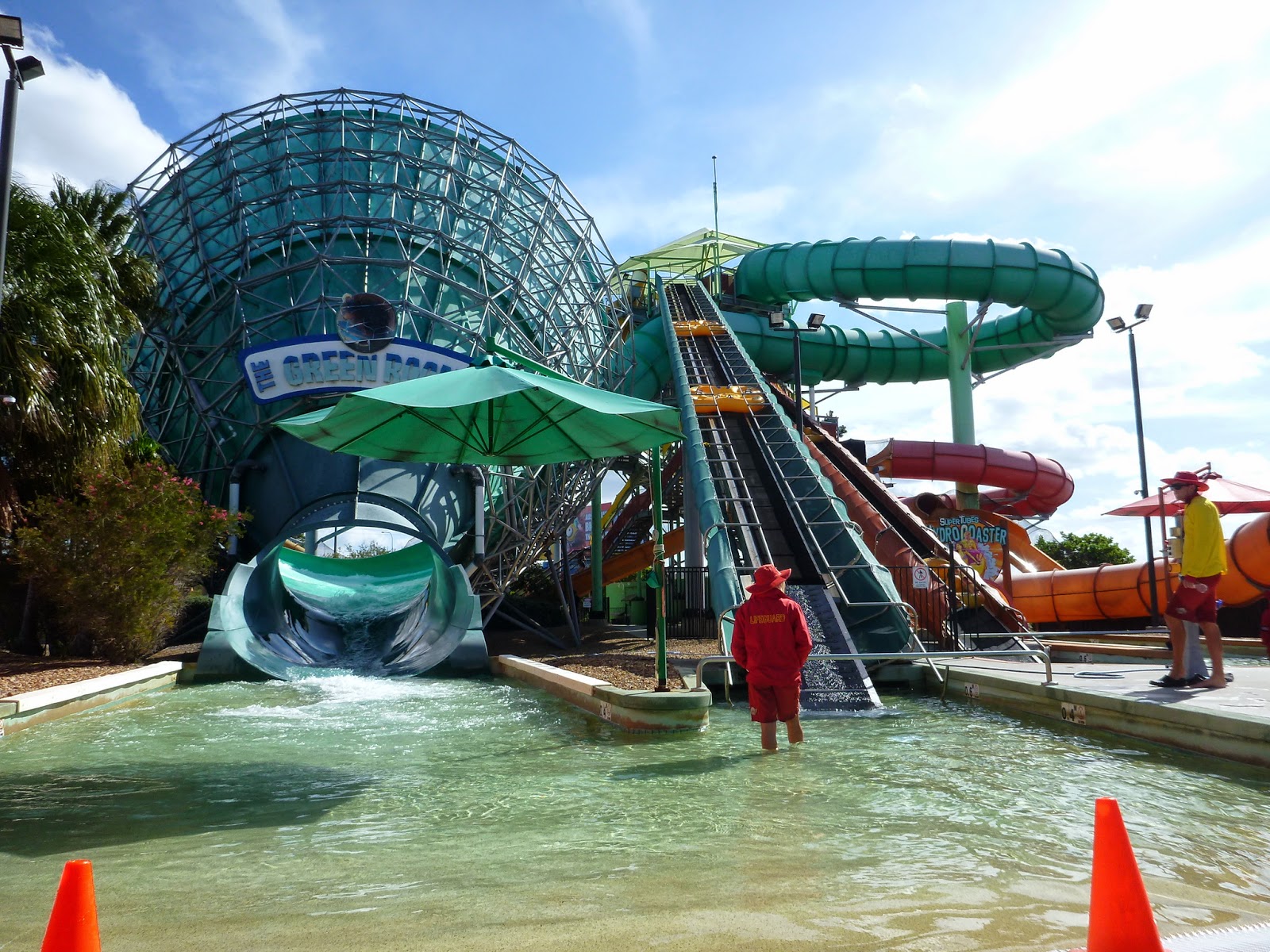 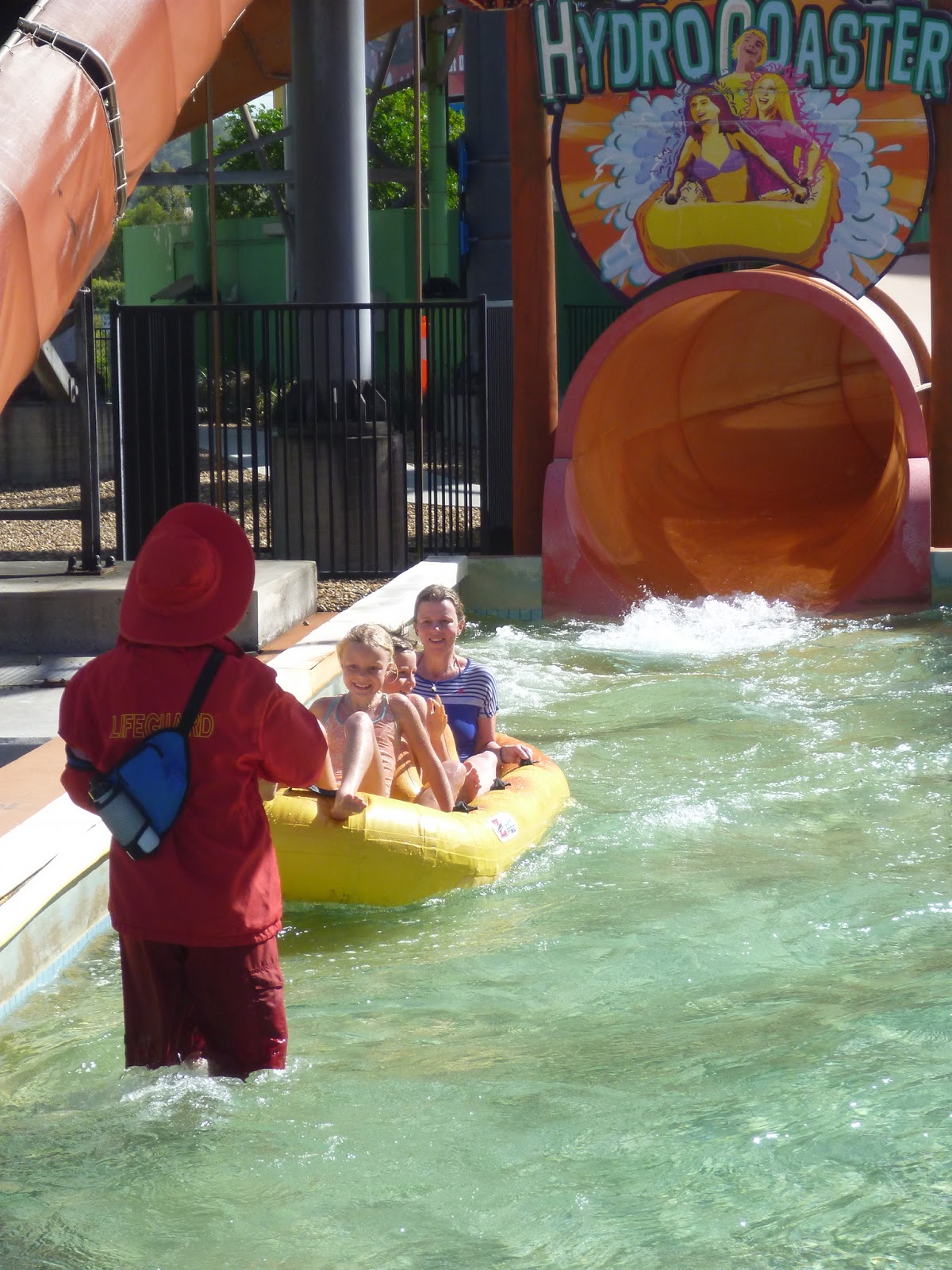 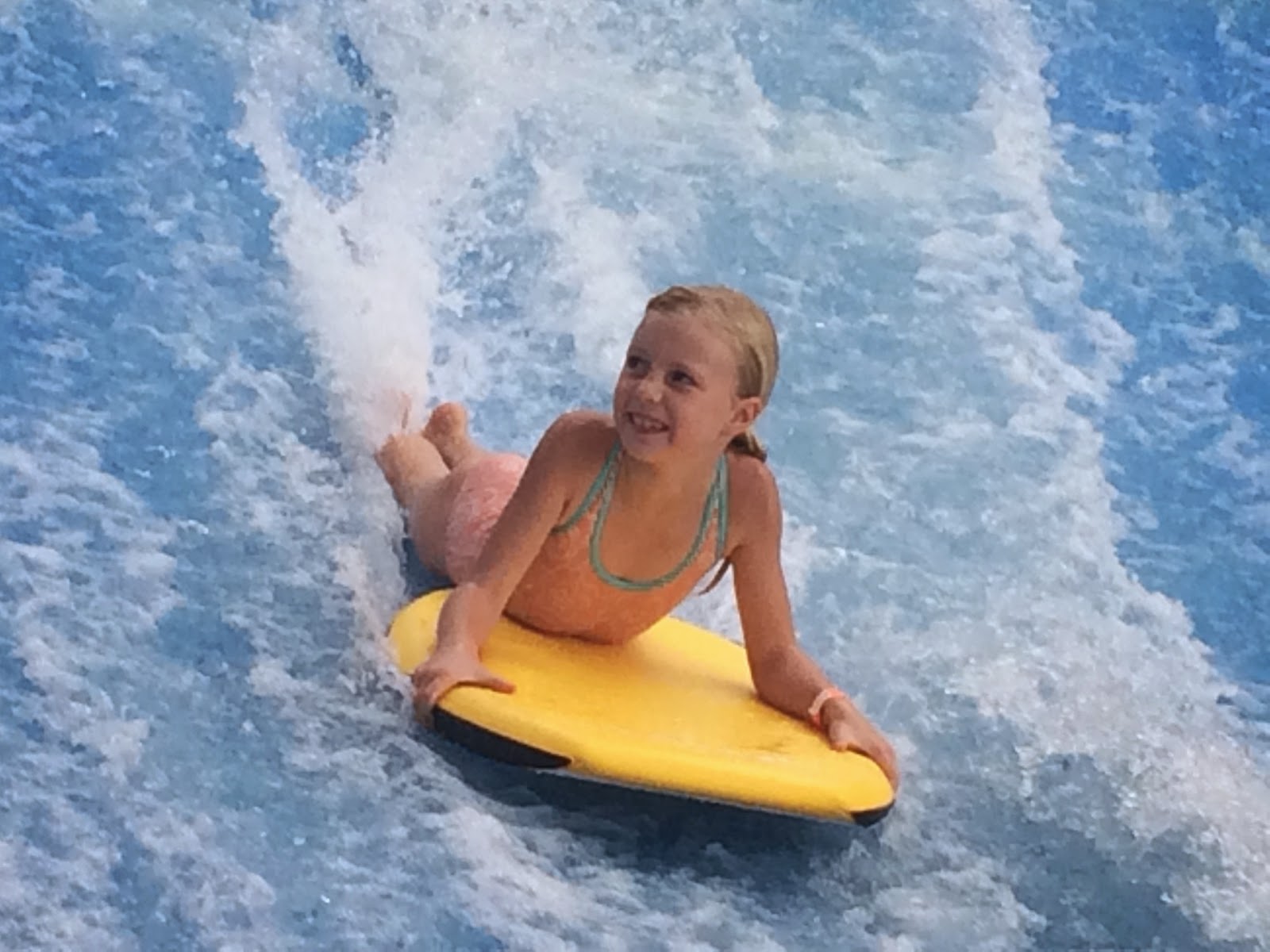 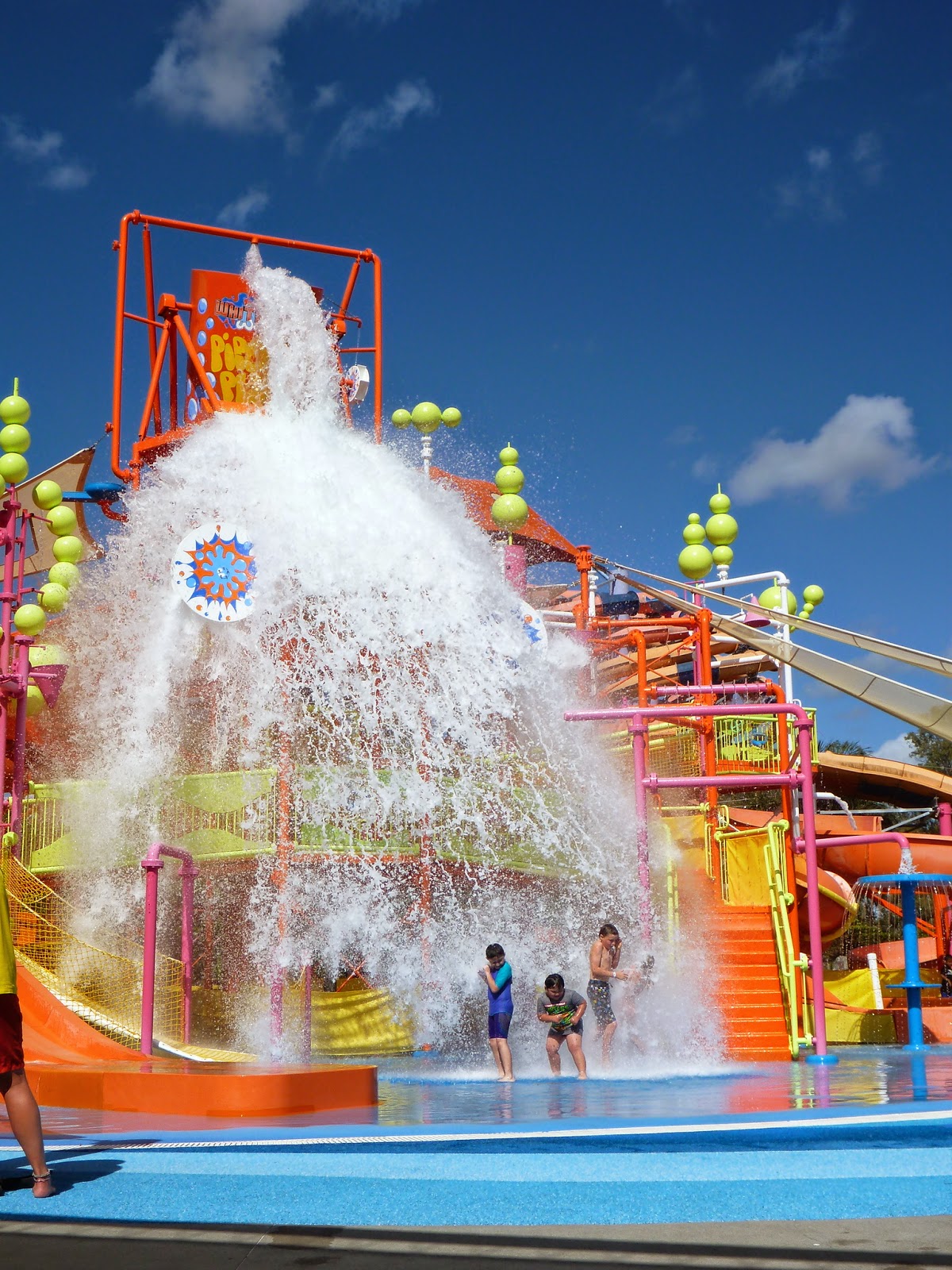 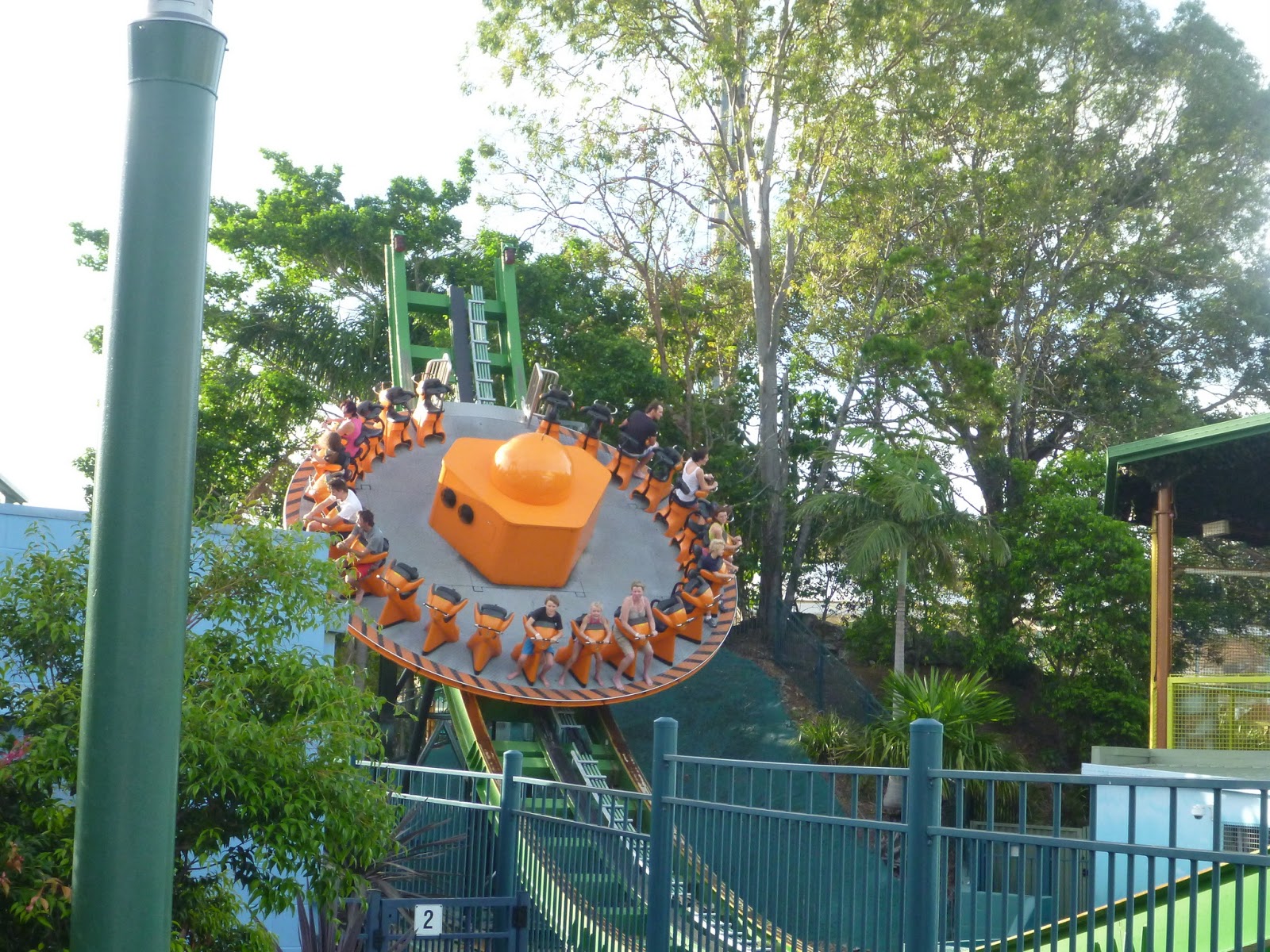 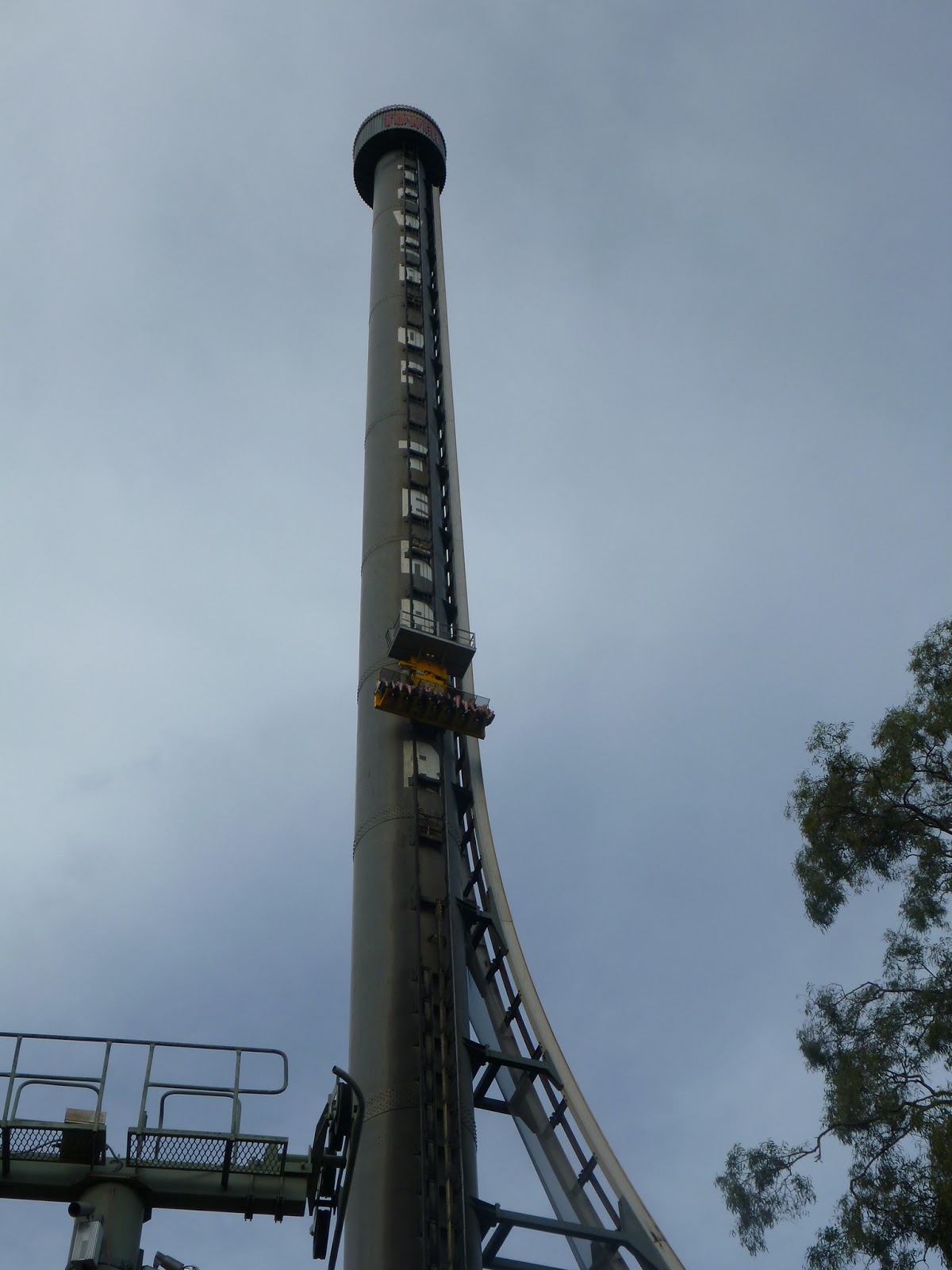 but we also spent lots of time getting photos with koalas and snakes, watching the crocodile and tiger feeding (if only they would combine those two),  and many other things … 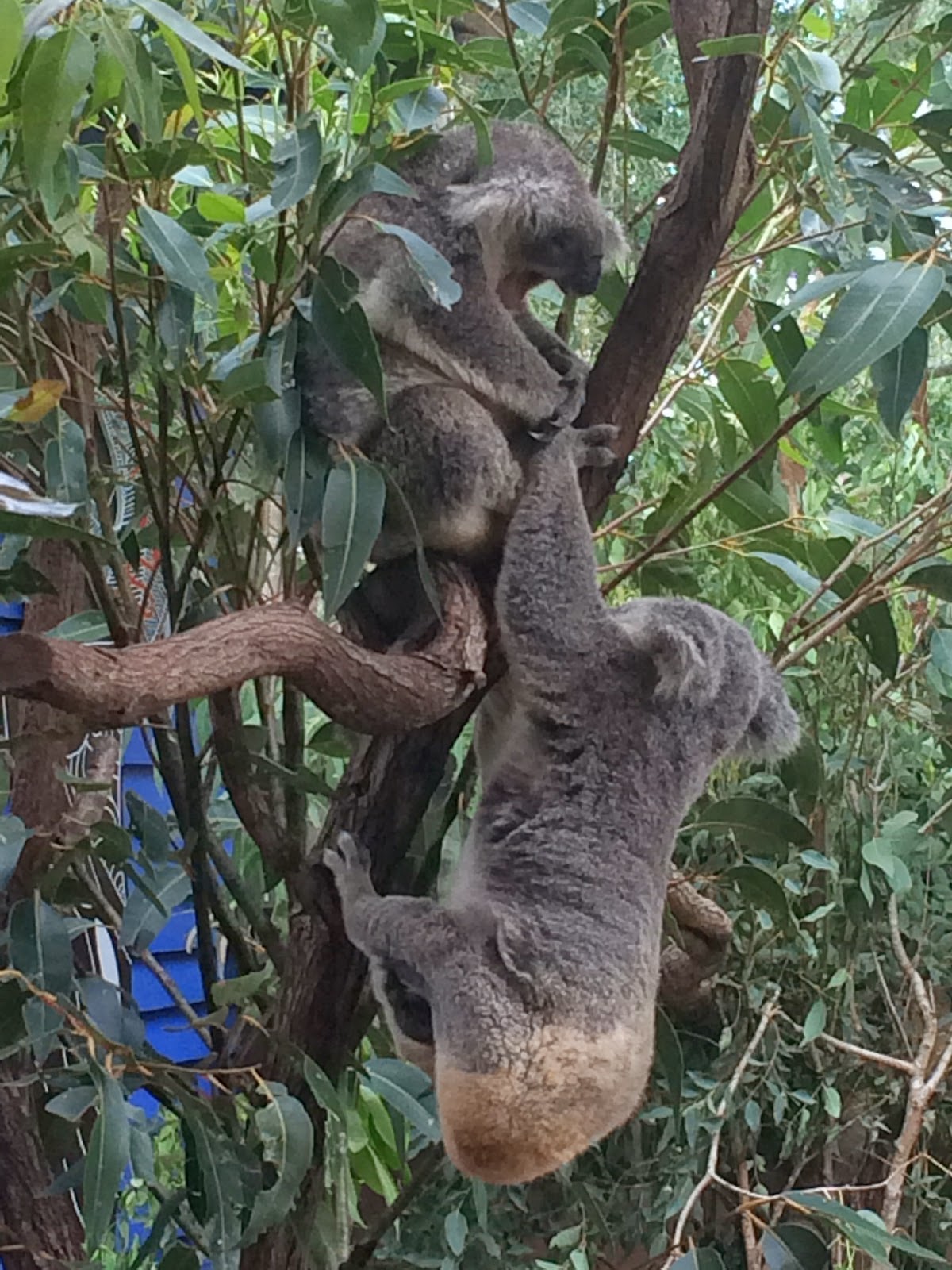 It was in fact the very first time in my life I’ve seen a real life koala. 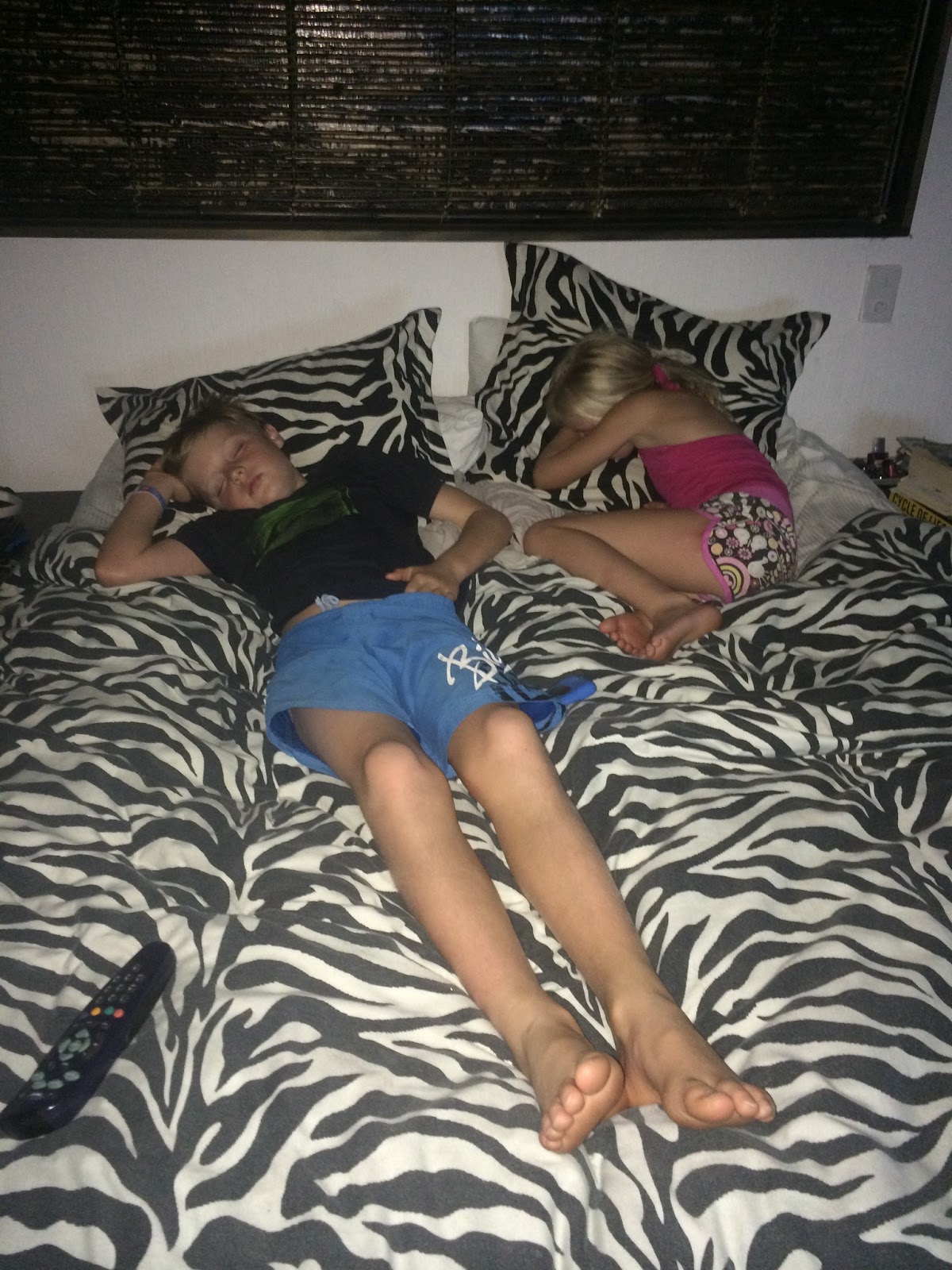 ==========
How do you get two monsters out of bed at 6.30am?
You yell “MCDONALDS FEAST!!!” … after your nephew comes off night shift from McDonalds with a big bag of Mcbreakfasts … 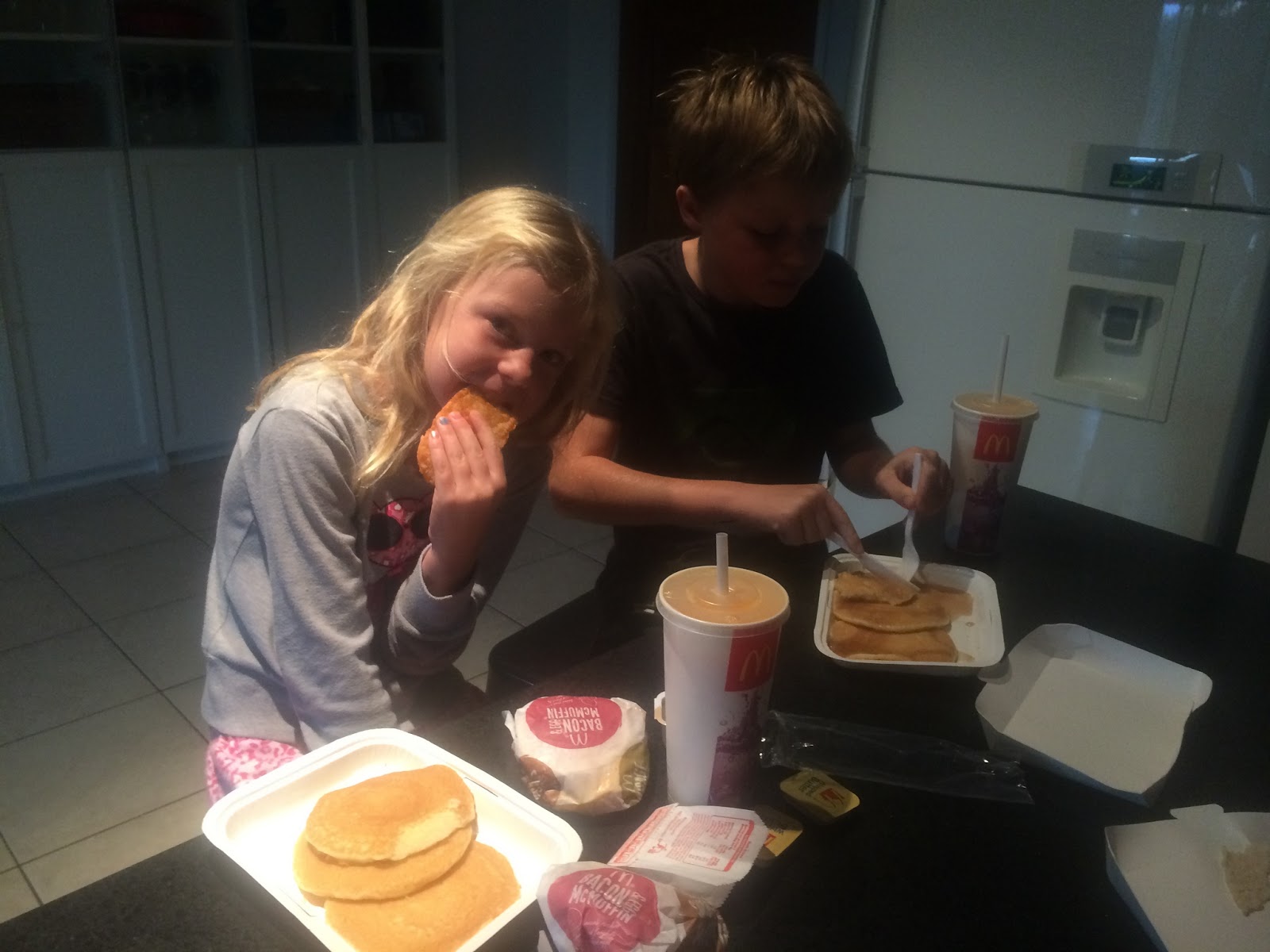 Result!
============
And finally …. as to what led to the drinking binge on Friday night that in turn led to the dog collar and fake tan incident … well there’s no real story to that than sometimes these things just happen when you’re having fun.
I’m just proud to say that I still went shopping in Harbour Town the next day … with my one legged fake tan wearing only my shorts.
I have no pride. 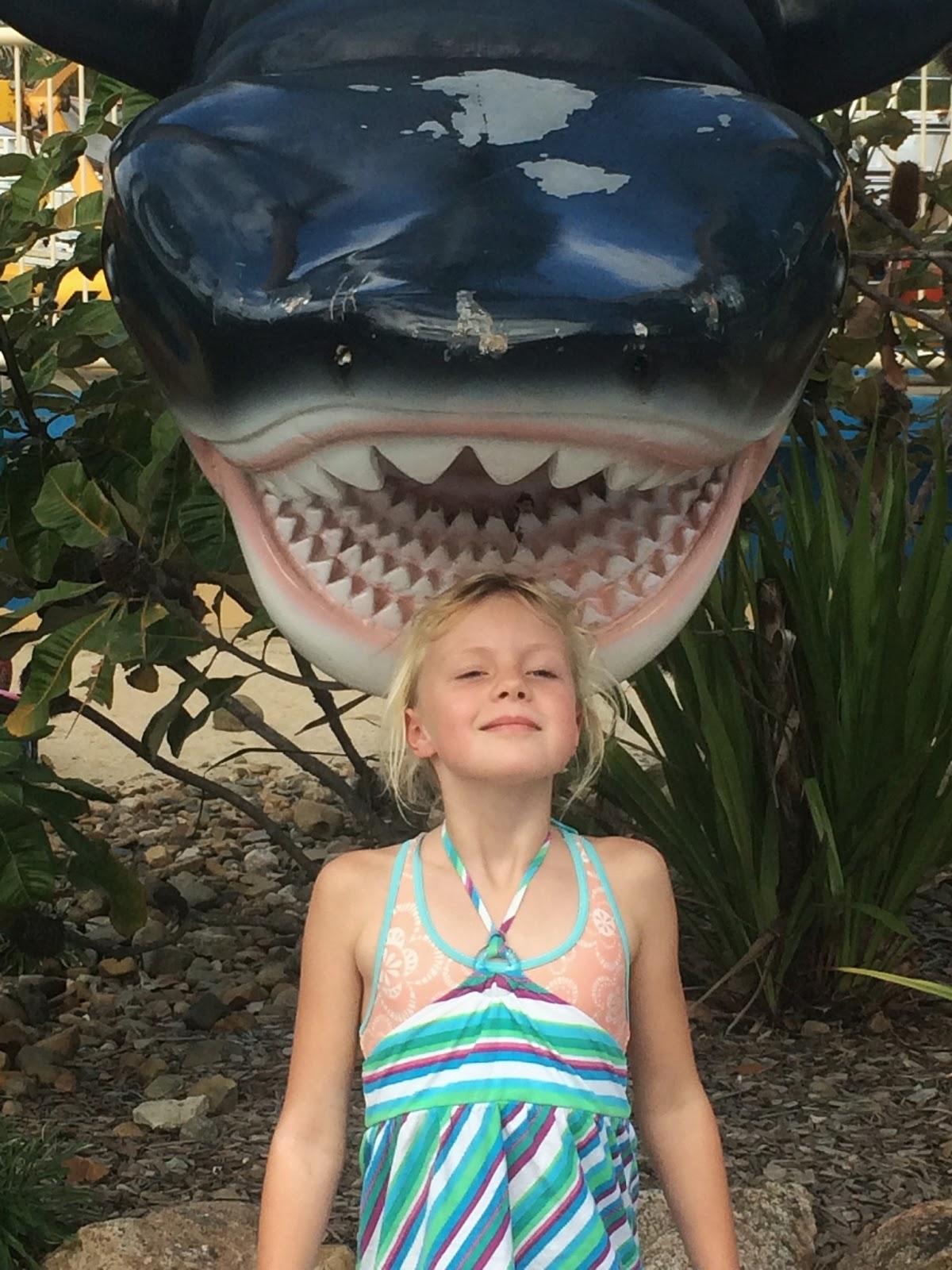 Here’s to another great holiday!