There were suggestions that my efforts last year in supporting Kim in her first Half Marathon were not 100% convincing. 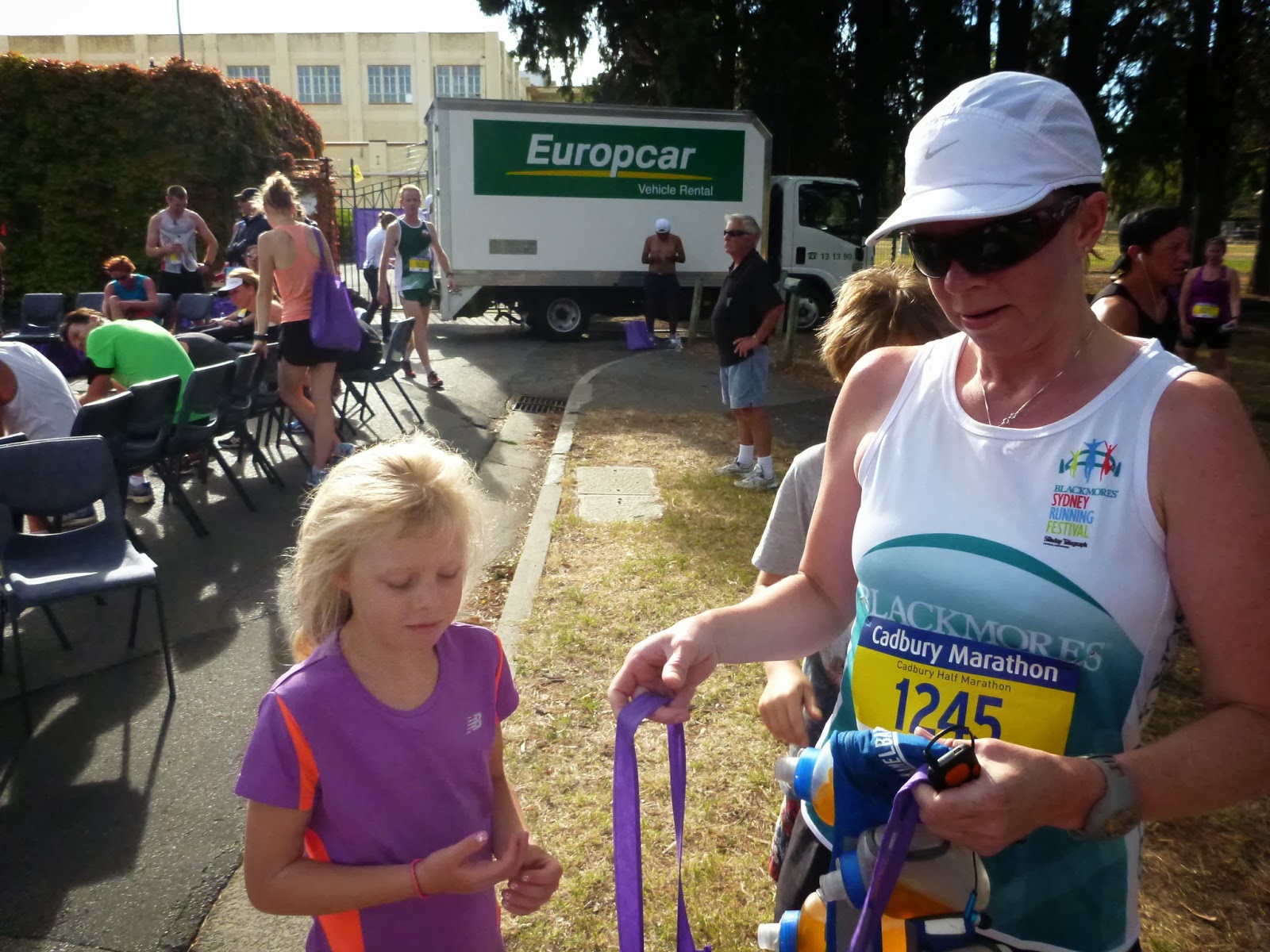 OK, nobody but me has phrased it quite like that.

In fact most people have been a tad more critical.

Because of this (and despite a deep desire to head up to Ben Lomond to do some XC racing) this year I set out to be a little less focused on me, and a little more focused on supporting Kim.

My efforts started just after 5.00am when I had to enter and wake the two monsters in their dark lair … 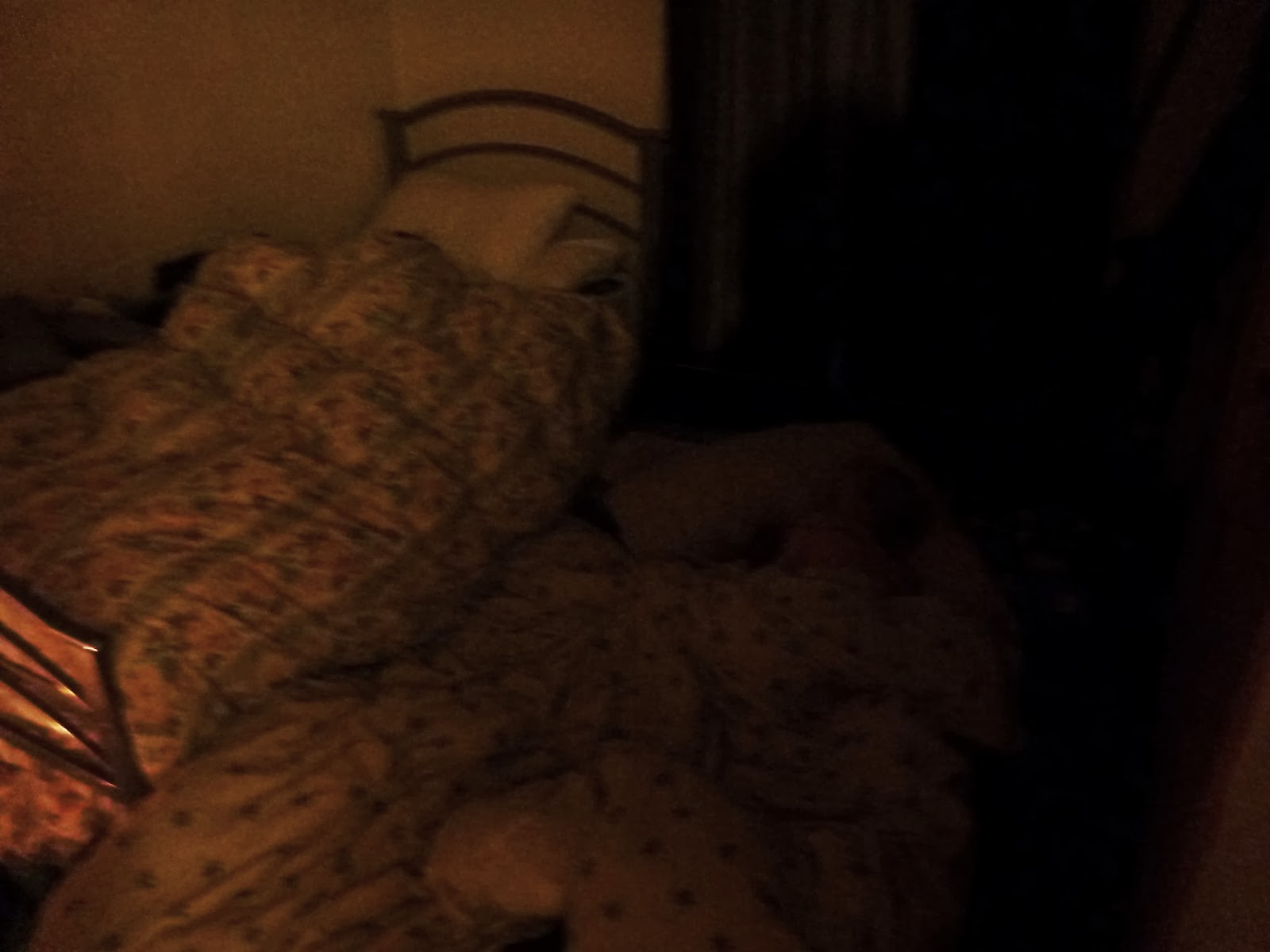 It was pretty scary going in there and getting them up, but (I have to admit) also kind of fun … 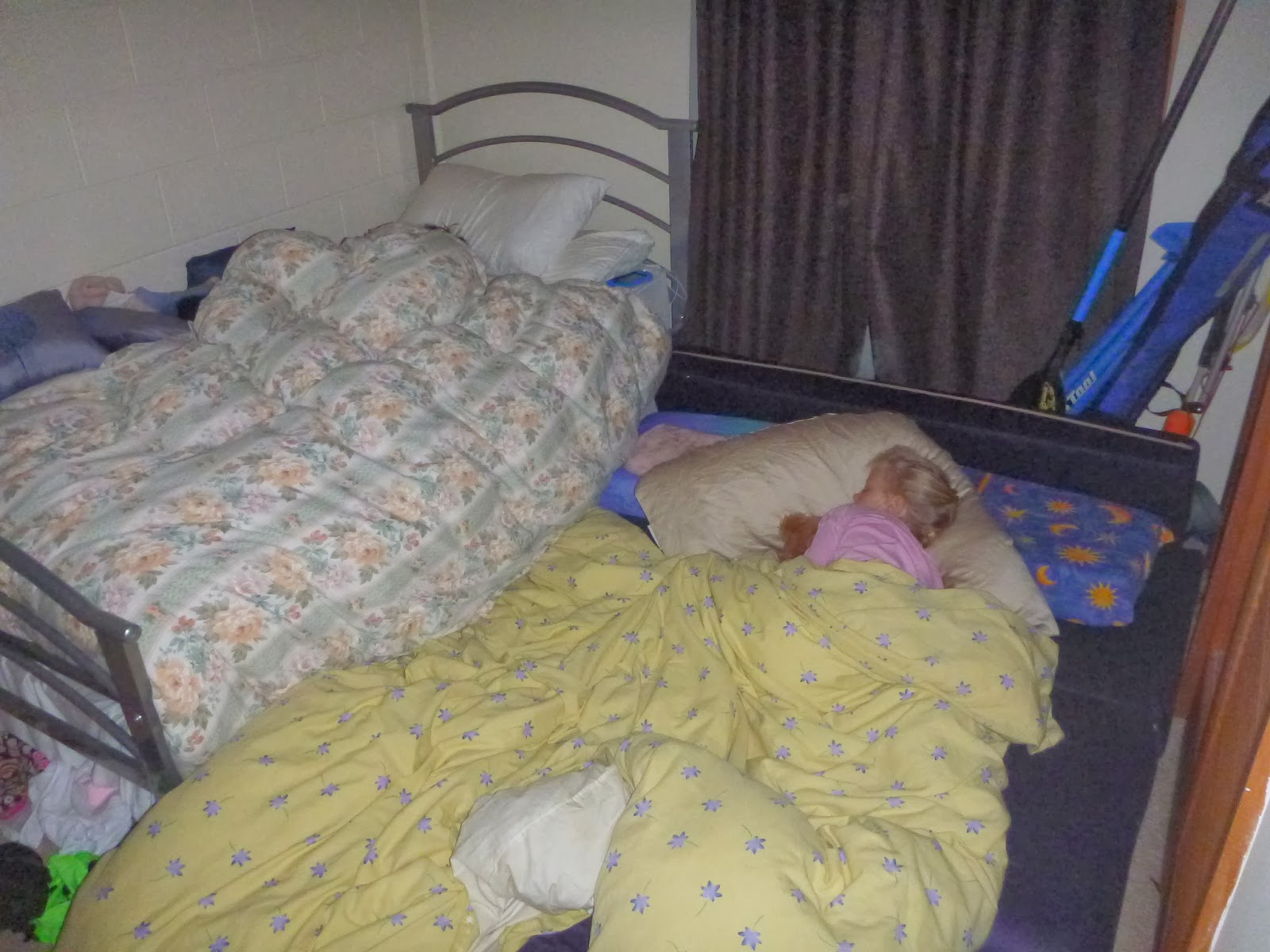 The really good news is that not only did I manage to raise them from bed (something Kim strongly doubted I could achieve), I had them fed, smiling and singing their “Go mummy, Go” support song even before Kim had got out the door … 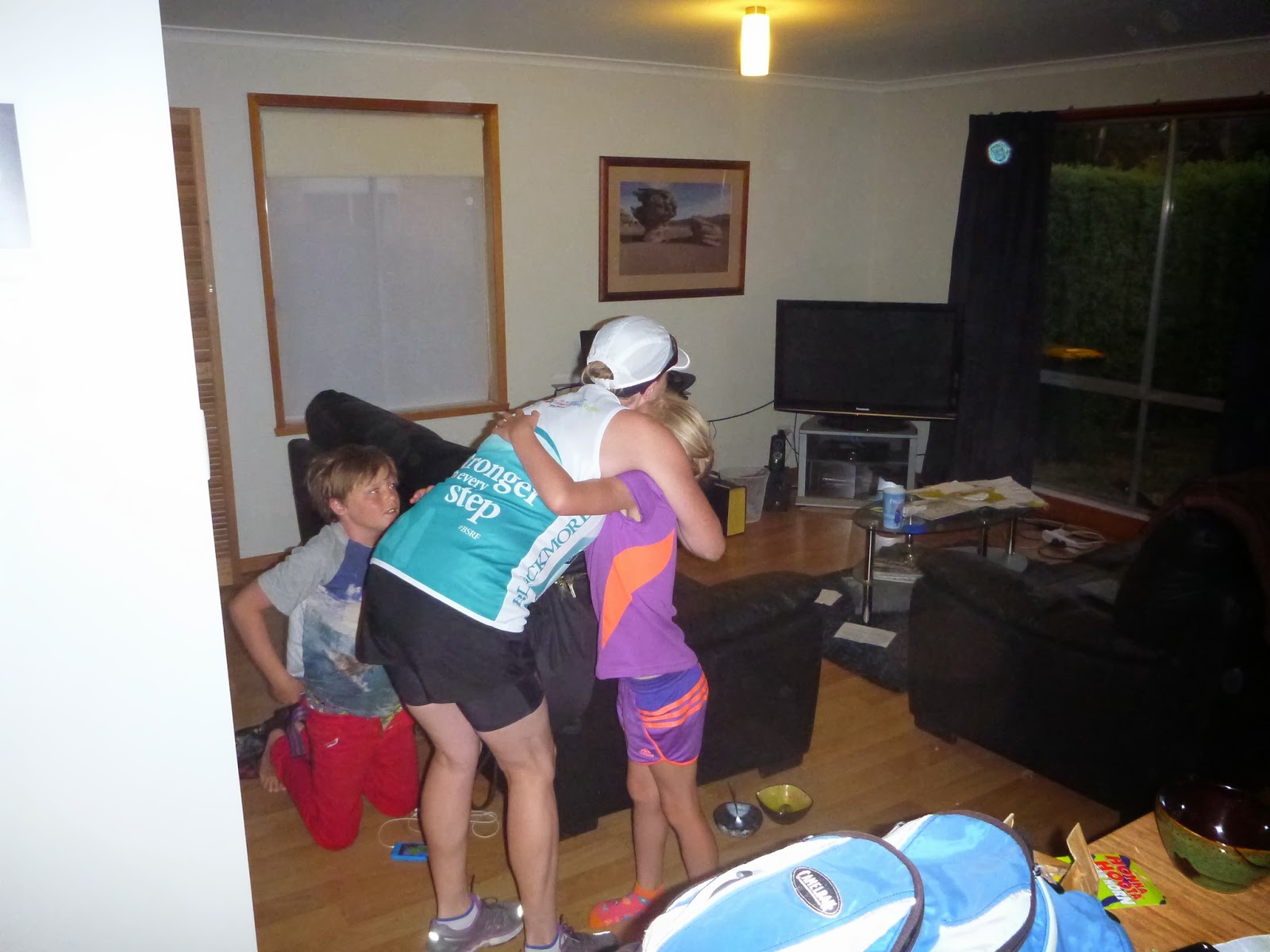 Kim went ahead in her car to get ready for the race whilst I piled the monsters and three bikes into my car and set off after her, and this time I managed (somehow) to get the three of us and bikes to the start line three minutes before the race started. 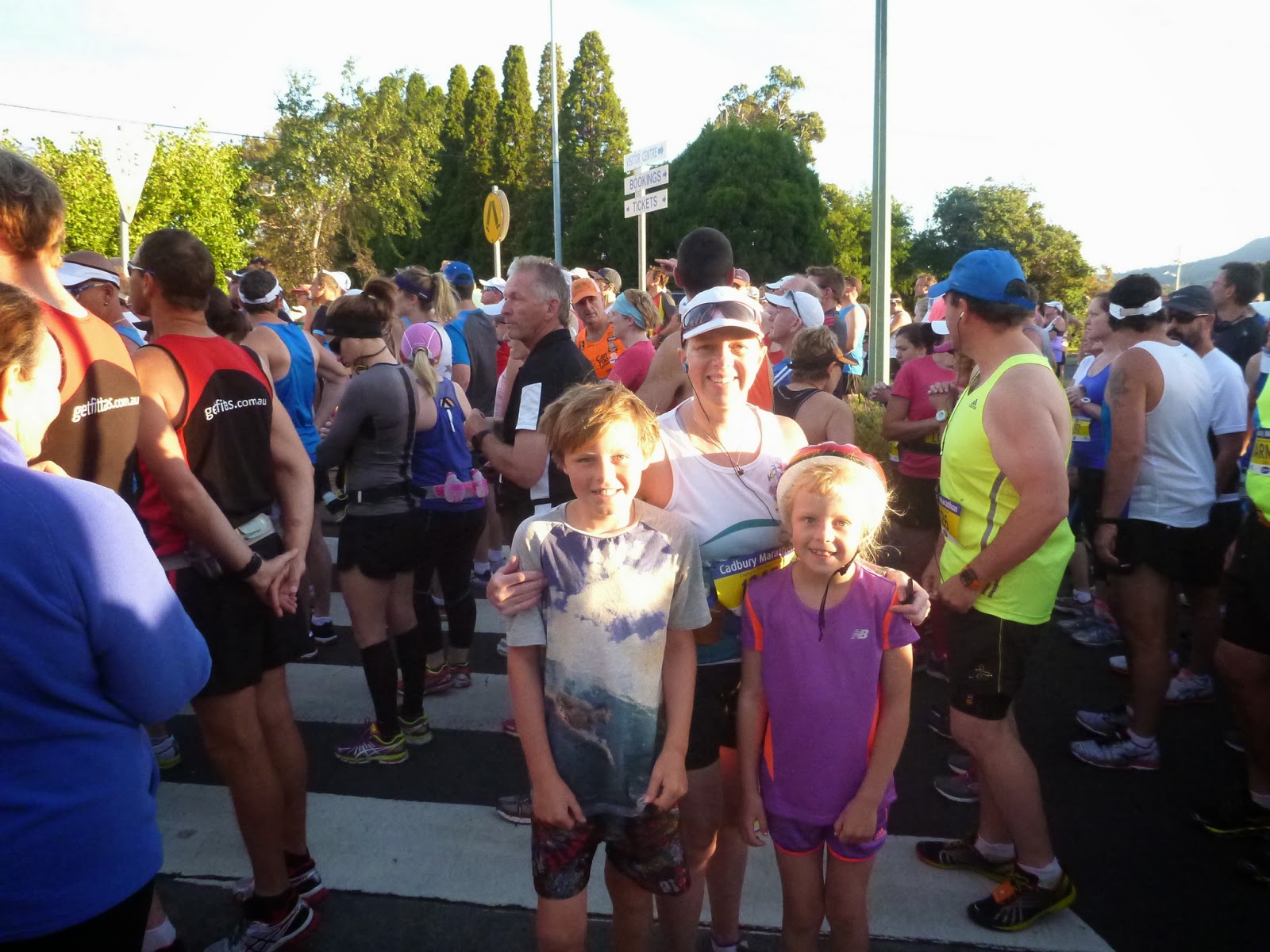 Already a huge improvement over last year, and if anyone who was there says something like “Didn’t they delay the start of the race by three minutes because of a late bus?”  Well, just ignore them.  I was there, I have the photo, and that’s what counts.

After watching the first lap we set off to catch up with Kim and I do admit that at this point we hit a snag or two.

The first problem was that poor little Zara monster, despite putting herculean efforts into her cycling, wasn’t travelling much faster than the mid pack runners.  So by the time we’d got back to our bikes, cycled down the hill and across the running route to chase Kim down … she was so far ahead of us that it was immediately apparent to me that we were never going to catch back up to her … especially as Zara seemed to think that honking her new horn was more important than turning the pedals despite my gentle urgings to the contrary.

Miraculously, despite twisting her handlebars 45 degrees, little monster somehow walked out of the accident unscathed and still smiling and willing to carry on.  Though she did make it quite clear that she thought she’d come quite far enough now and it was time to find a playground. 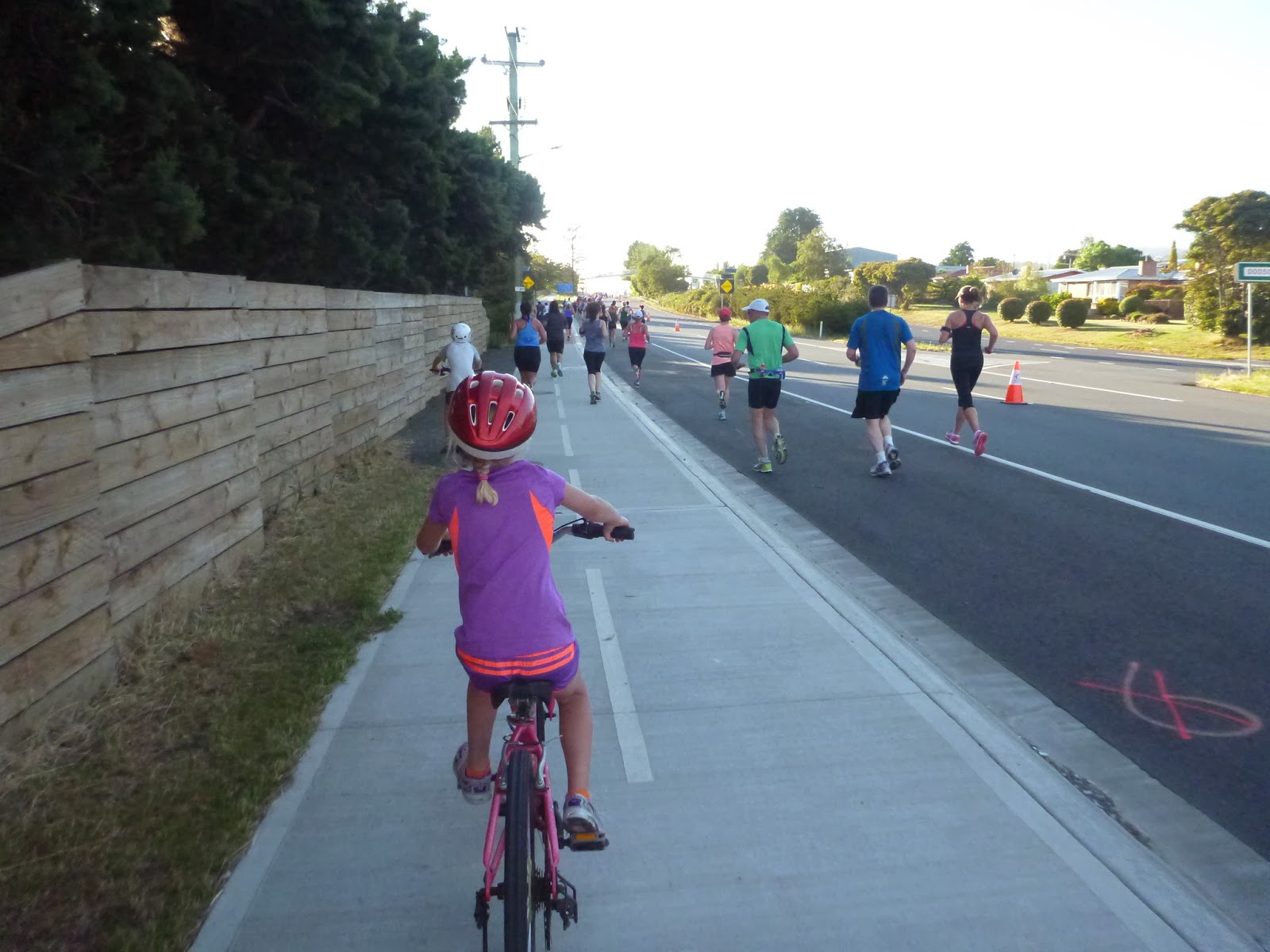 I managed to keep her motivated long enough to get to the Montrose Bay playground where I nervously calculated I had to keep the monsters entertained for over an hour before Kim would be coming back past us, but fortunately I forgot how easy it is to entertain monsters … for example, you say … 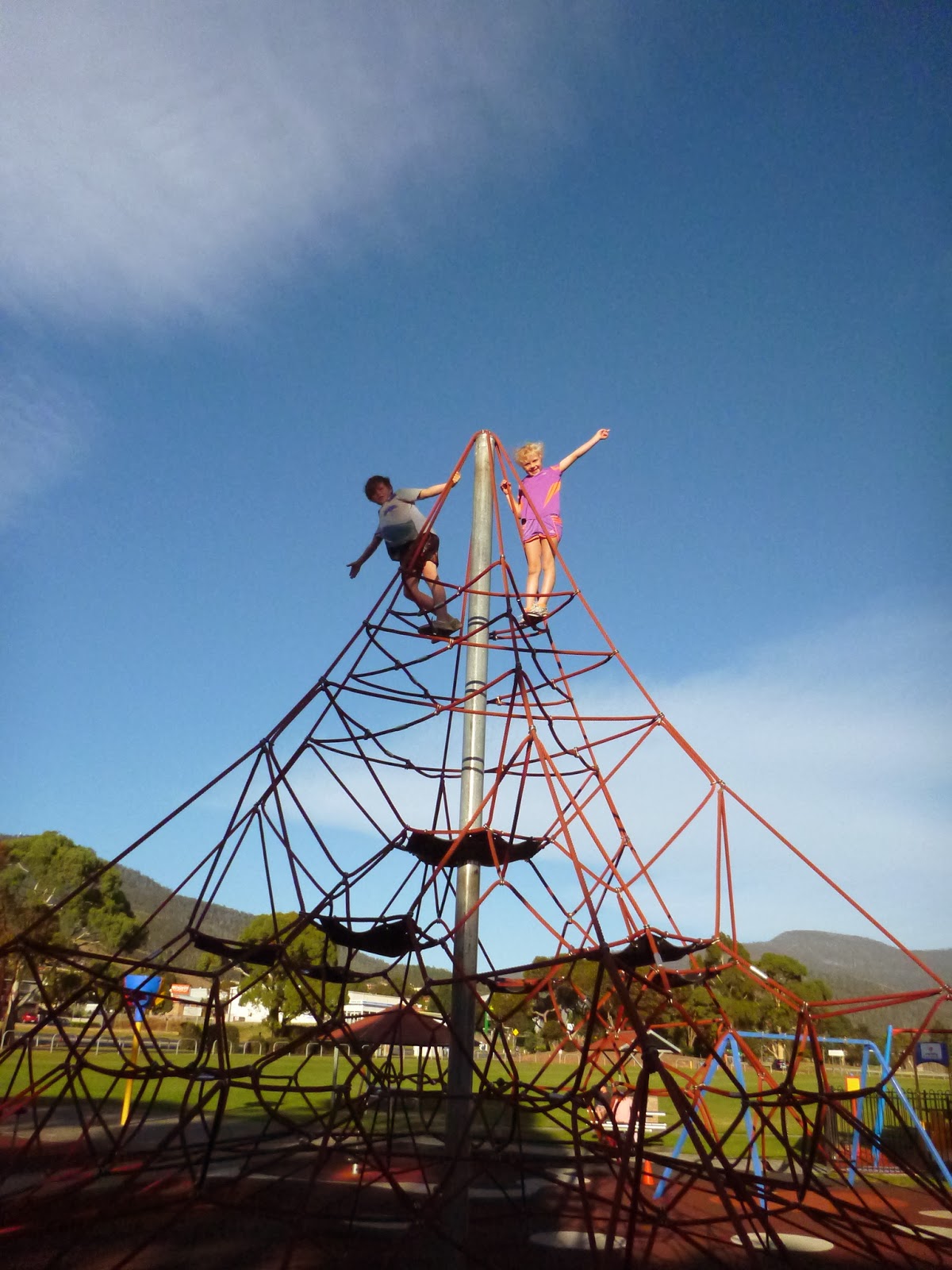 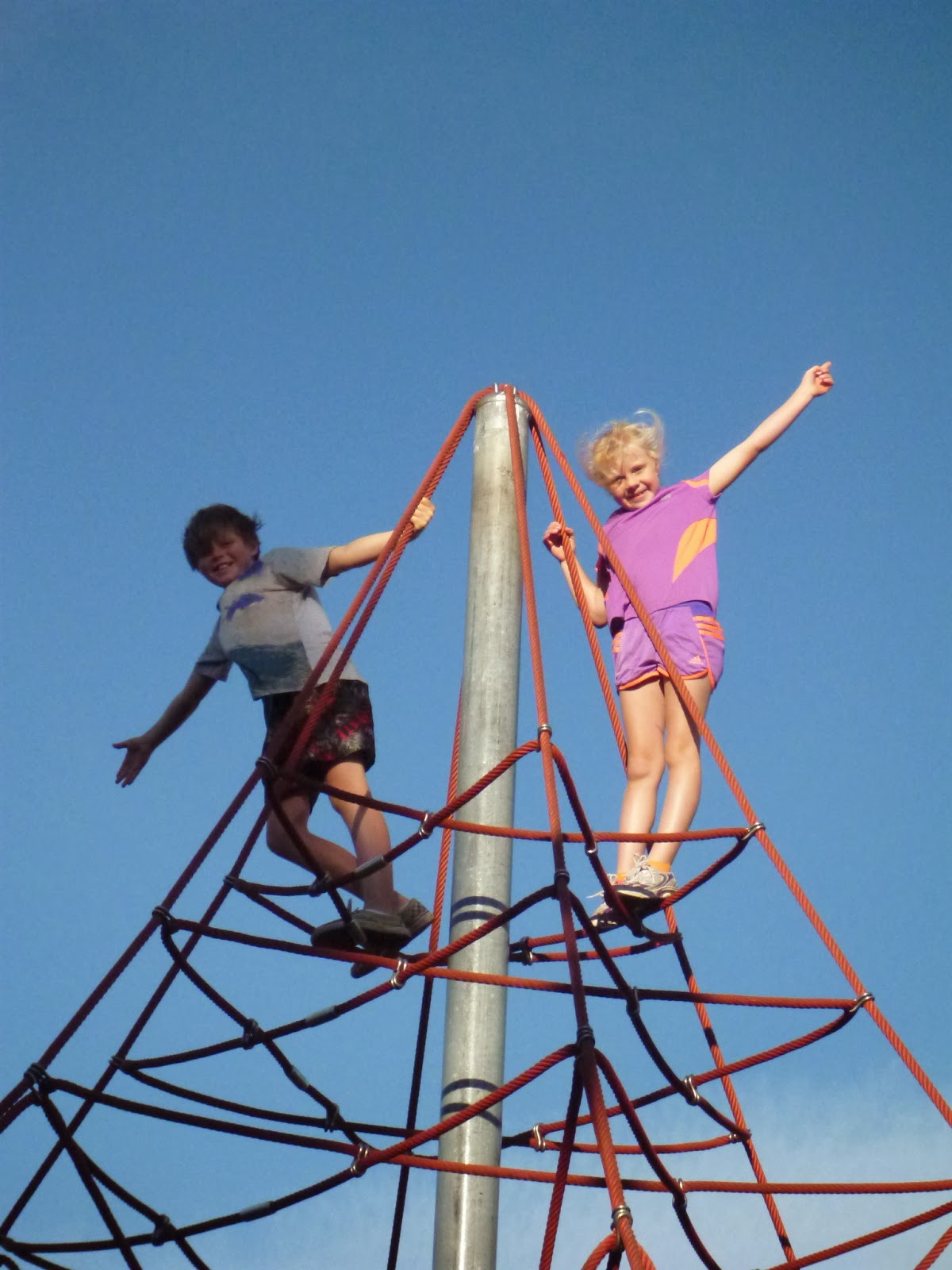 or, “I bet Zara can hold onto that longer than you can …“ 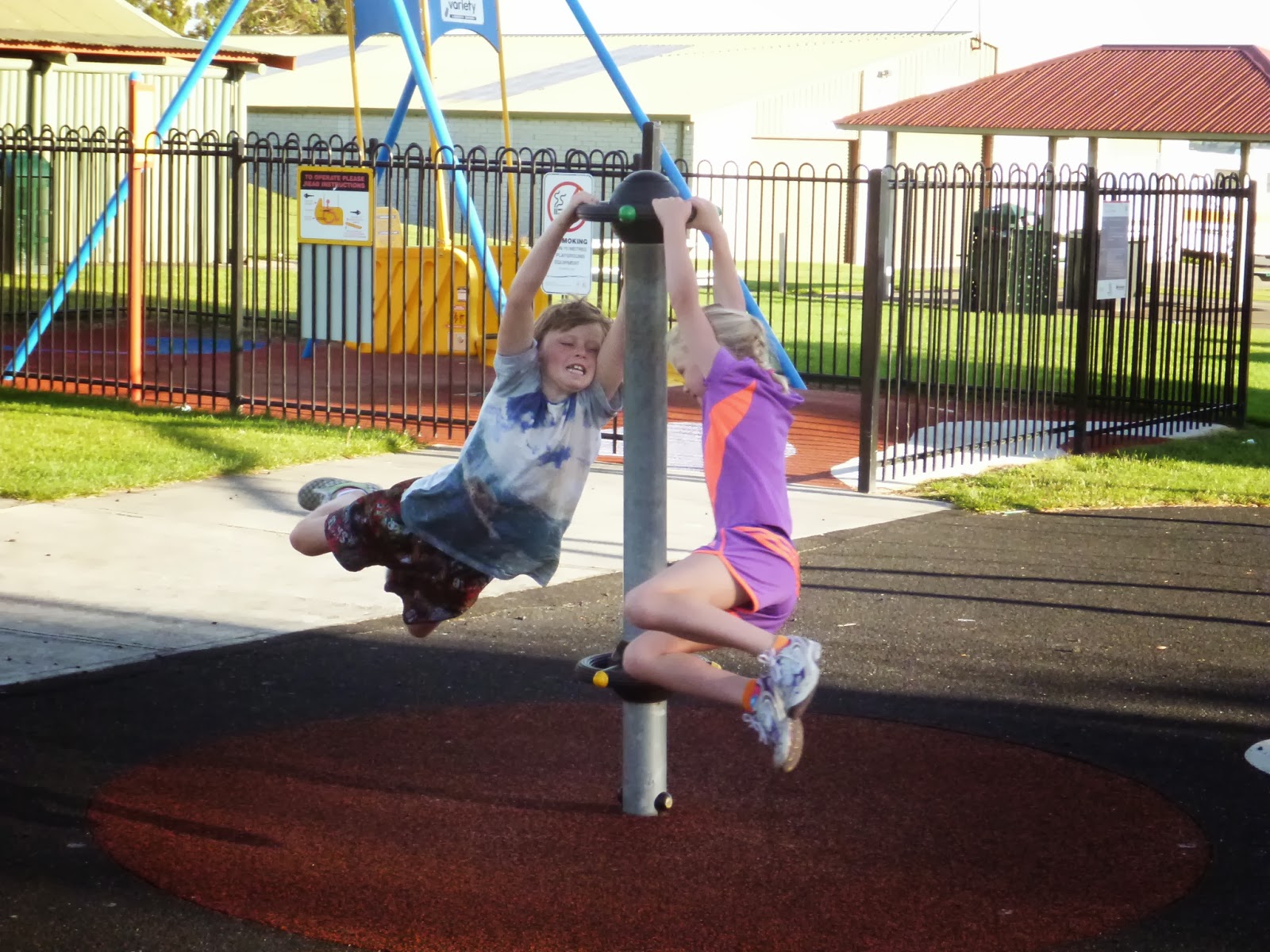 … and you just keep saying something like that with everything you see and before you know it … the hour vanishes.

I don’t know why they say this parenting stuff is hard.

About ten minutes before I estimated Kim would come back, we went back to the road and cheered, clapped and honked all the runners past until the mummy cheer squad finally got to spring into action for real as Kim ran towards us.

Unfortunately at this point, little monster got so worried about getting left behind her mummy again that she went silent leaving Kim to run past us waving as nothing but deafening silence came back at her … 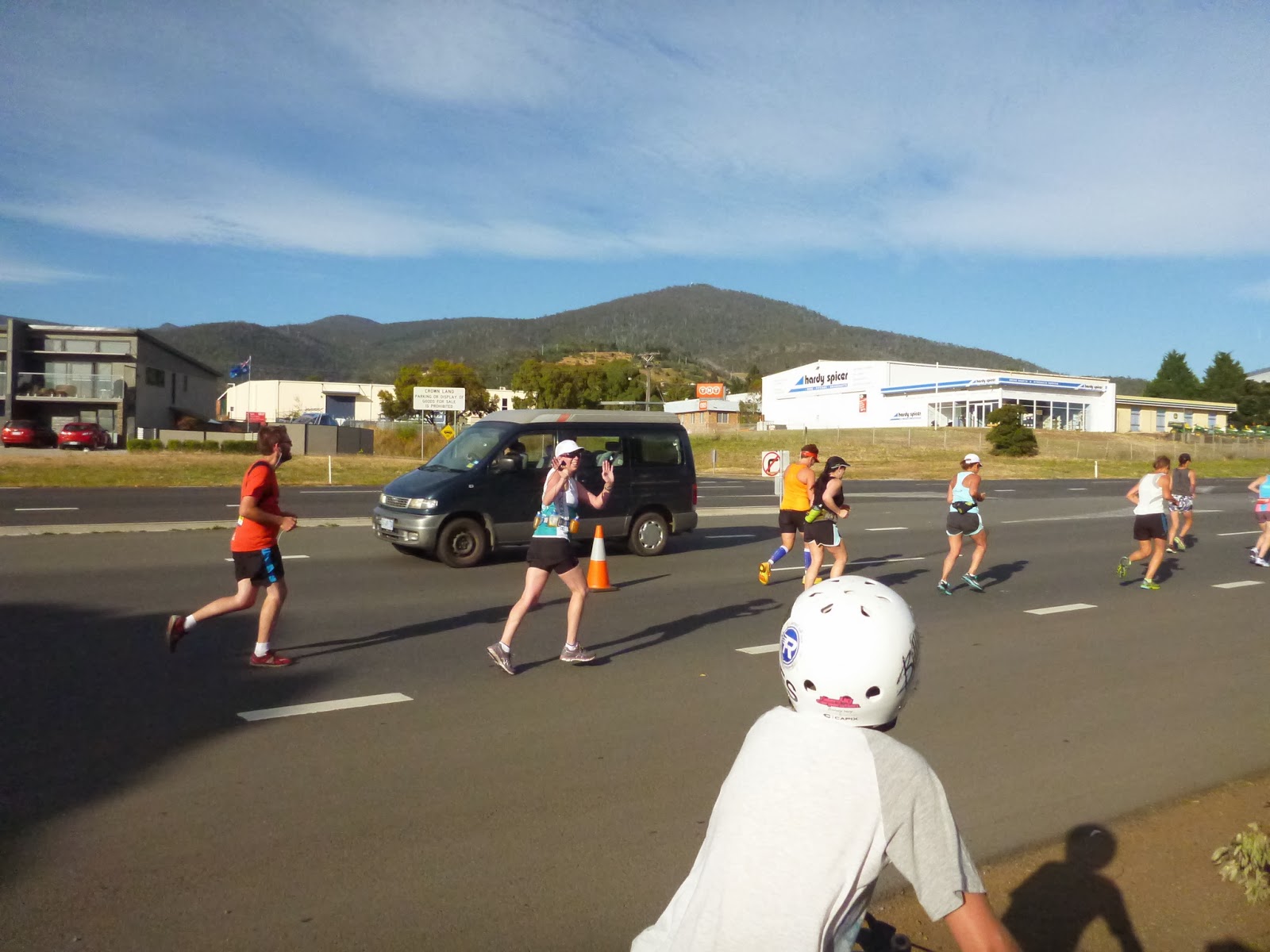 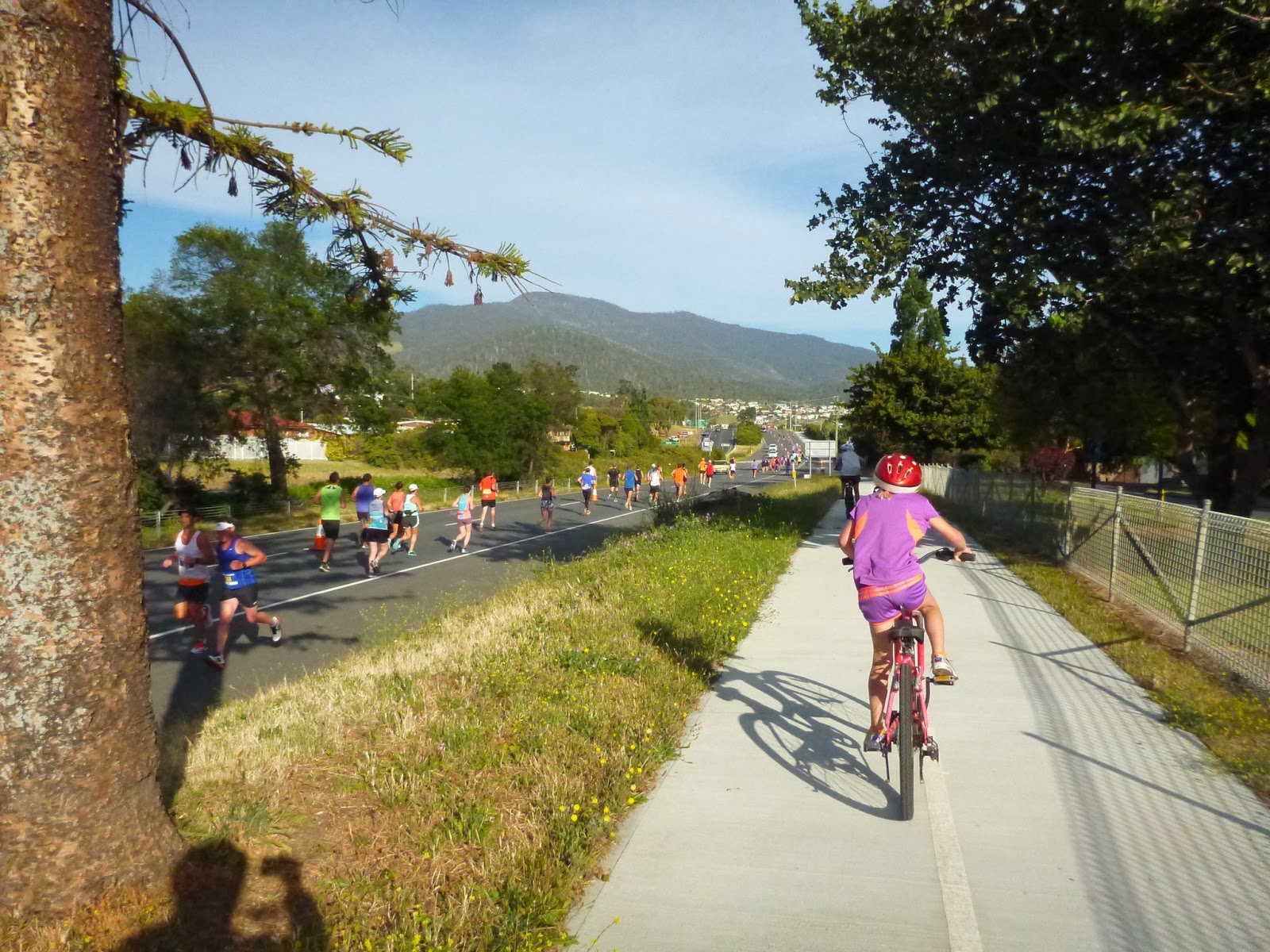 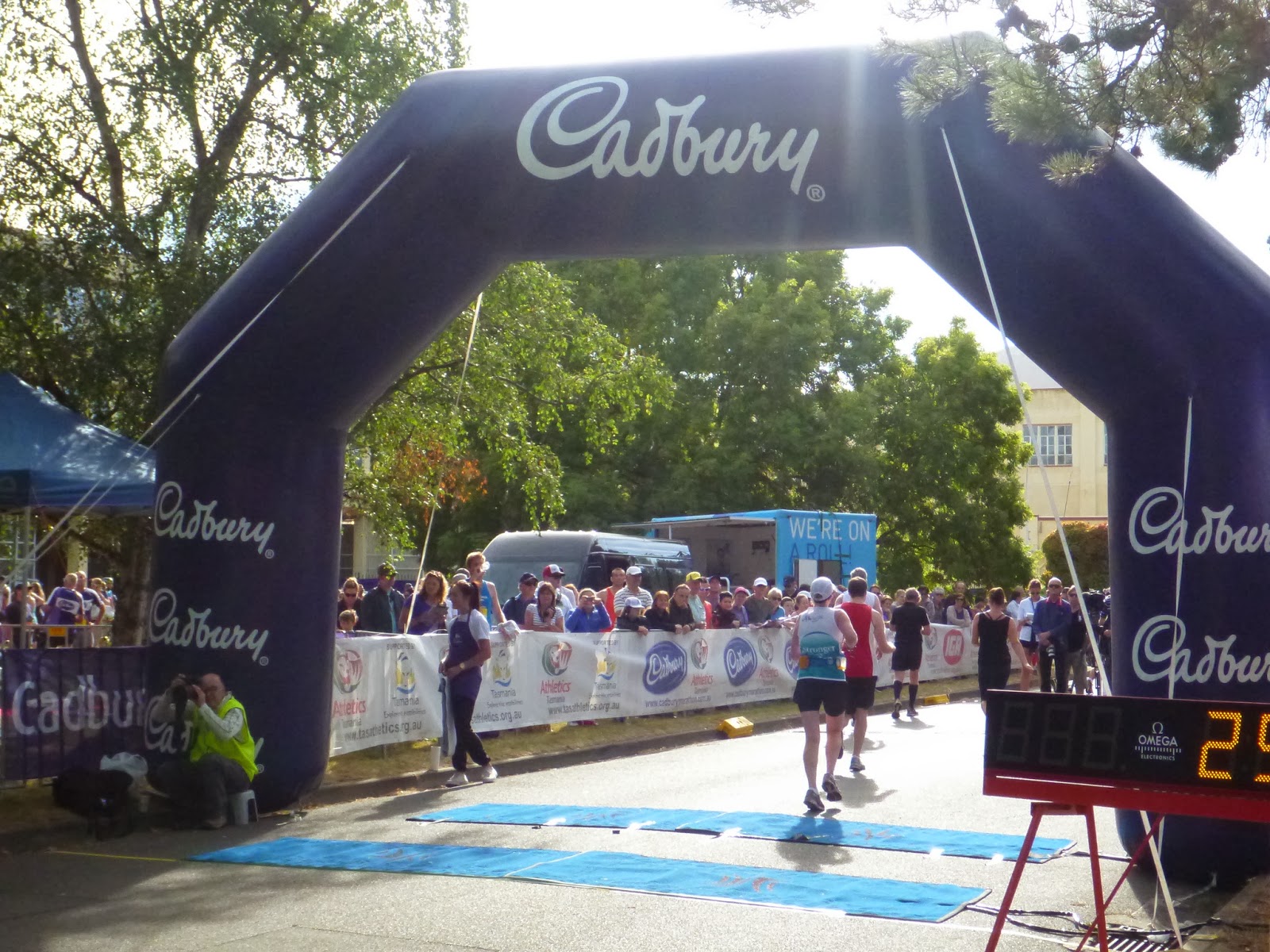 But we did managed to keep up with her on the way back to the finish line … where the monsters leaped on their amazing mum (well on the bag that contained the chocolates anyway which is close enough). 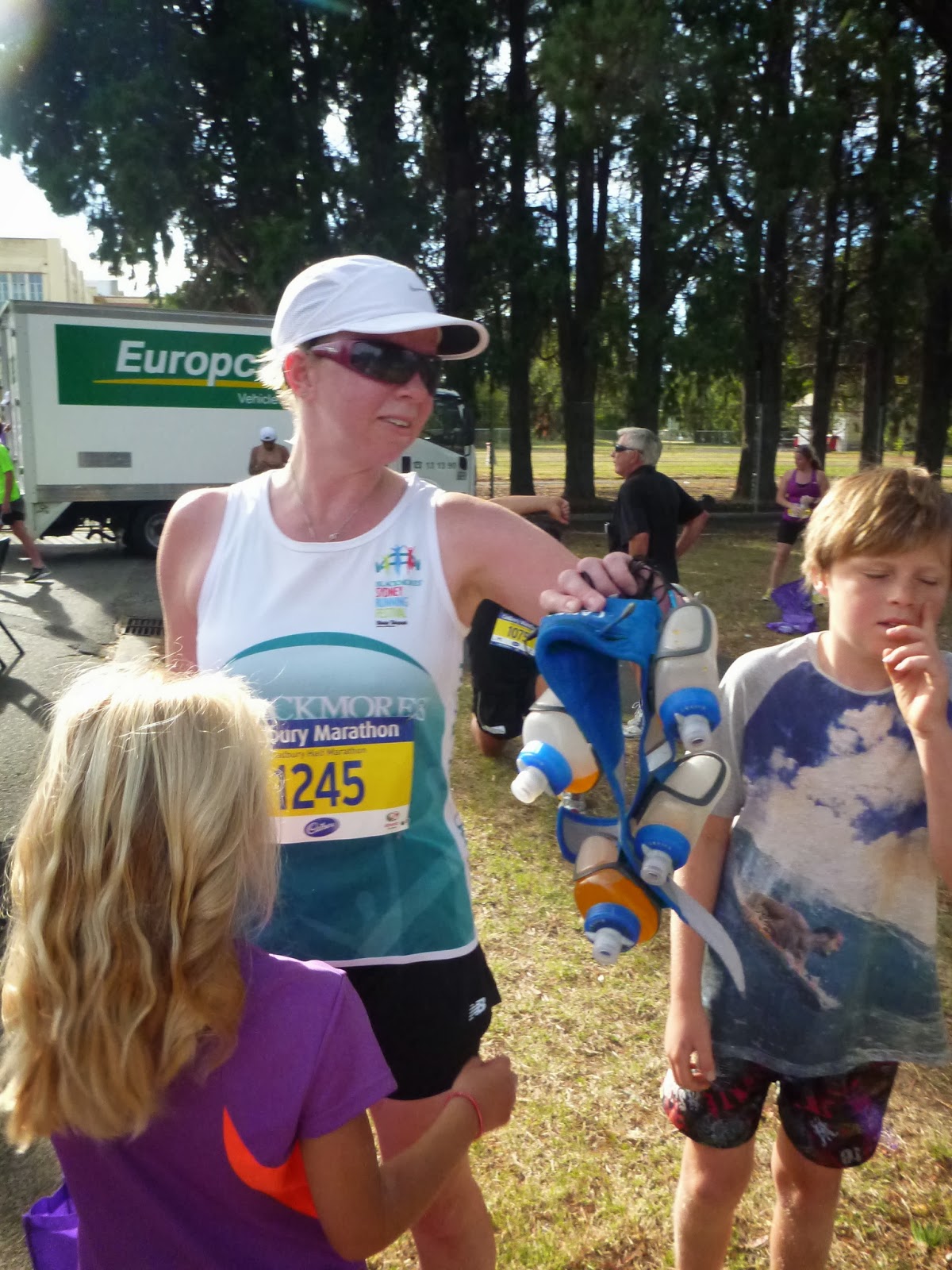 Kim’s official time was 1:52:40 which she was pretty happy with.
As to my status as future cheer squad leader … well I believe that’s still under review, but I’m confident that after my efforts today, there’s a good chance I could be leading the cheer squad to the Gold Coast later this year to support Kim in the Gold Coast Marathon.
There’s no stopping me this year, no stopping me at all.