Note: I’ve written this post as a “Lessons Learned” report which means I’ve written this as I saw the situation from my viewpoint.  I always recognise in these situations that others present may have seen things differently and recall things differently.  The purpose of a Lesson Learned is to put those various viewpoints and recollections together to better understand what happened and whether it can be improved on in the future.  With that caveat .. let’s start.

I don’t own a Marine Radio and I certainly don’t know how to operate one, and to be honest I never thought it would be important that I could. 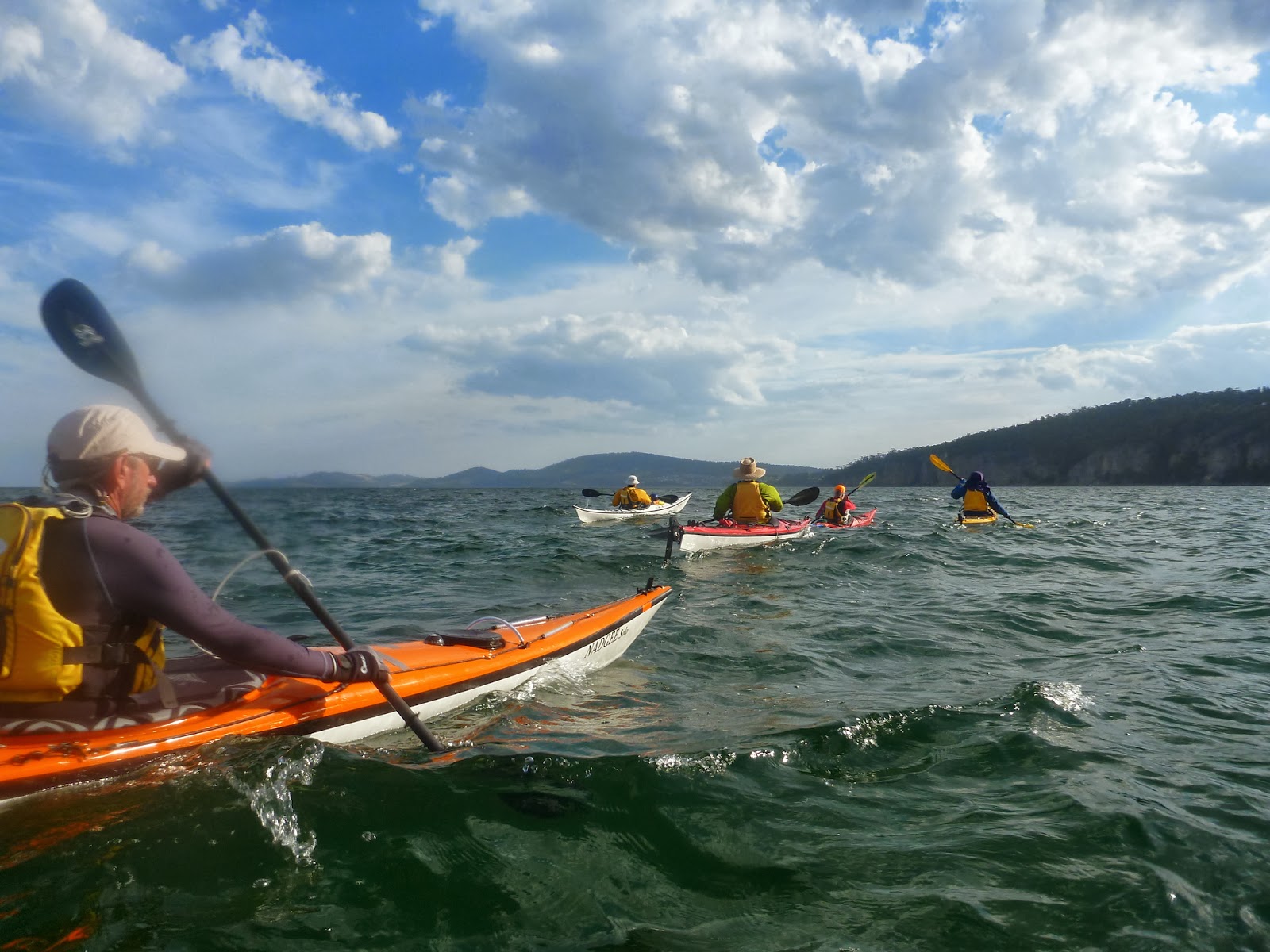 Last night made me rethink that a bit. 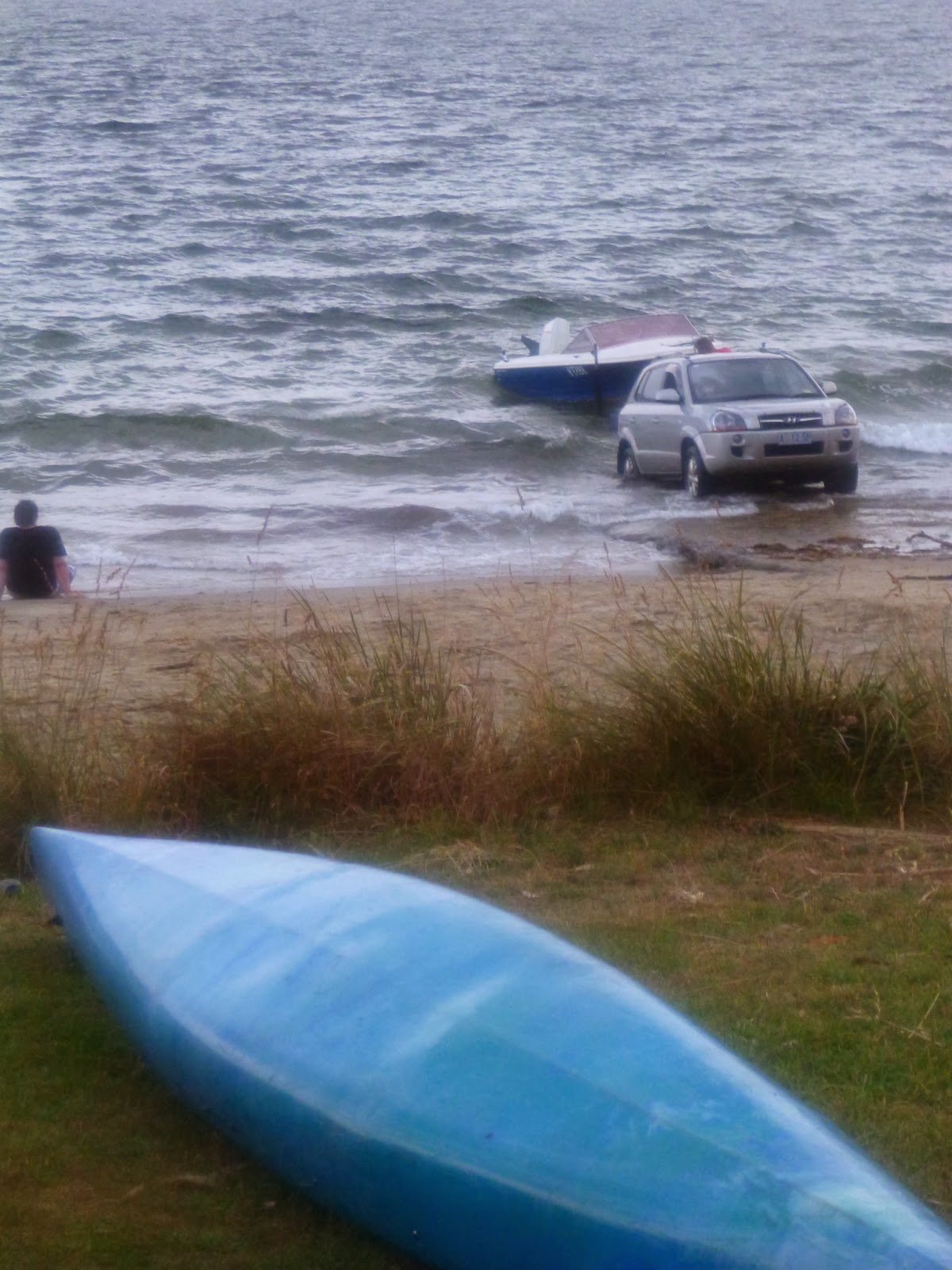 It all started well.  We had a biggish group (nine, one of whom just turned up) but we had at least four strong paddlers in the group (including Peter who was the person who just turned up) so the ratios were all to the good and I was looking forward to a nice night.

After our safety discussion on the beach, we all launched and marshaled up outside the surf zone as requested.  Then when we were all there, we set off … except I (who was sitting in the middle of the pack) went in one direction (heading along the shore outside the surf zone as per the route I’d described) and everyone else (following the guy in front) set off on a completely different bearing … heading straight for the furthest visible point on Alum cliffs a few kilometres away. 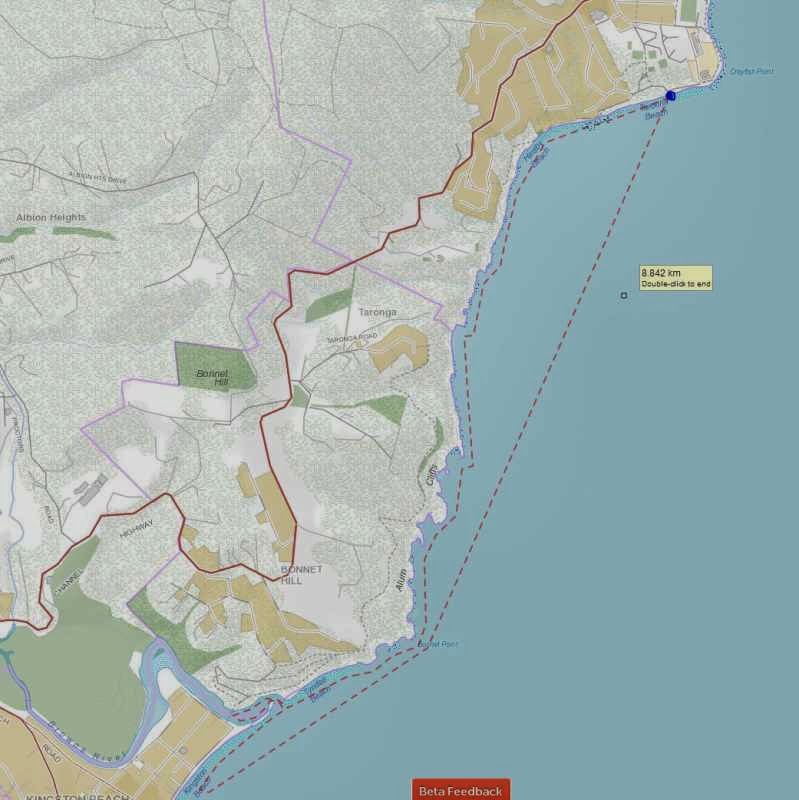 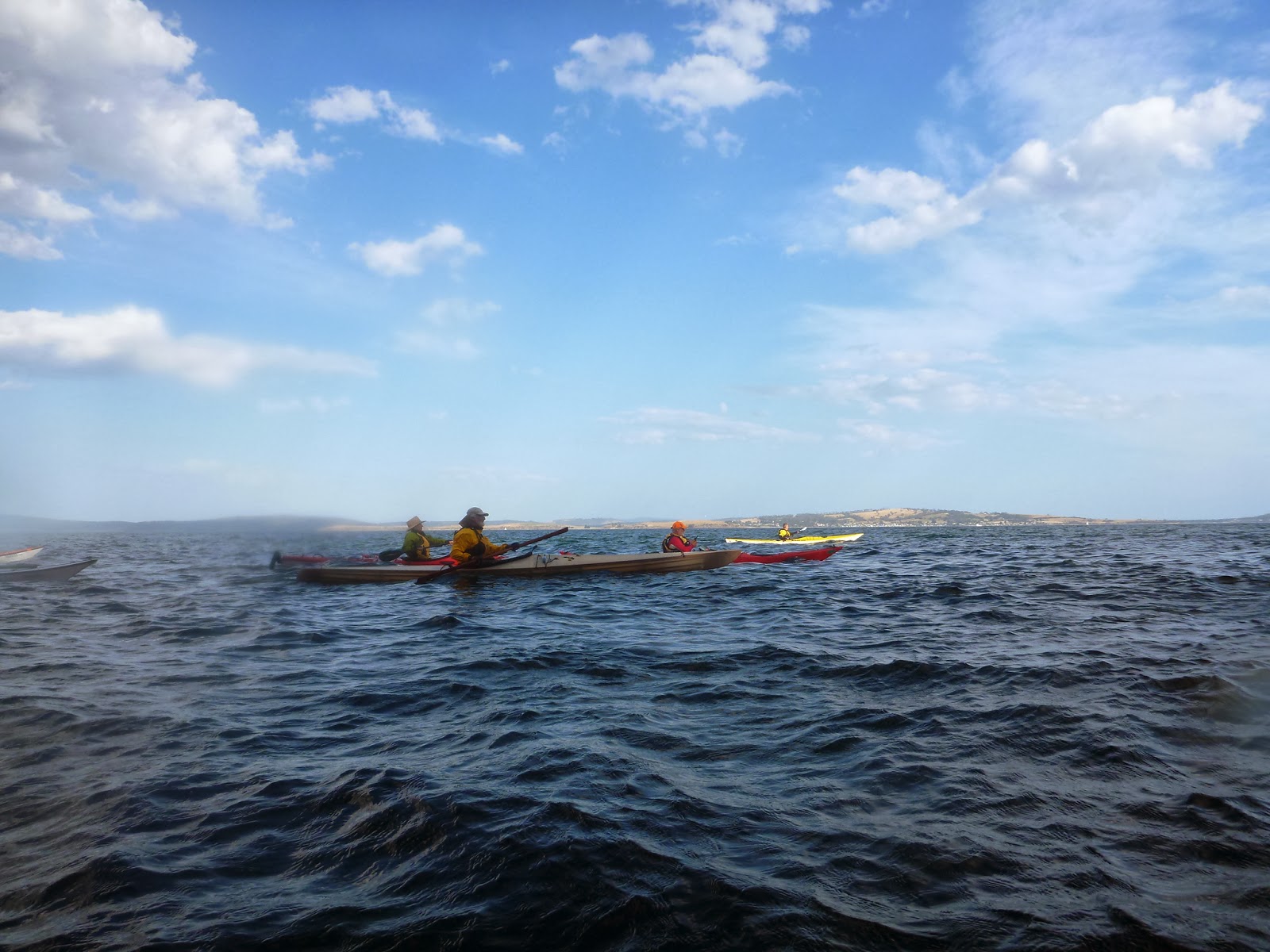 Now as an economist I love to observe human group behaviour, and so I decided to keep paddling on the route I’d suggested which put me parallel to the group but closer to shore.

I should also point out that I had made it very clear in my written and safety briefings that we should always try and stay together as a group (so technically I was breaking the rules here and the smart thing to do would have been to accelerate through the group and redirect them closer to shore, but this was an experiment).

Interestingly, despite my doing what I could to make myself obvious, the group just kept on going on their straight line and the gap between us got larger and larger and larger.  Now I won’t know if they just assumed I was doing my own thing, or if as a group they were just unaware that they had already lost a paddler, but it just showed to me again how quickly a group can get out of contact if all members in the group aren’t constantly communicating and checking what is happening.

As a further experiment, once we were a couple of hundred metres apart, but with me being slightly in front of the group (I was trying to make it obvious that I was there), I stopped and put my paddle up in the air which is the sign meaning “Come to me now”.

To their credit, two of the less experienced paddlers at the back of the group saw my signal and immediately started heading towards me, and I even heard one of them yell out a few times to the group in front of them (who were much closer to the caller) to indicate that I was signalling for a group up.

The other six paddlers remained oblivious and carried on their beeline towards Kingston.   When I asked later on, no one I talked to reported noticing either my paddle in the air or heard the calls.

I want to stress, no harm was done and I wasn’t doing this to make people look stupid, it just happened and I decided to see what would eventuate.  What it did demonstrate to me is just how easy things can diverge from what is planned to what actually happens on the water.

From my viewpoint, it looked like everyone else fell into group-think with everyone just following the paddler in front assuming he was going the right way, but of course they may have seen it differently.

Anyway, we eventually came back together and comments were made about “feeling my baleful gaze from a distance” drawing the group back to me which made me laugh, and we continued along the cliffs having a great old time. 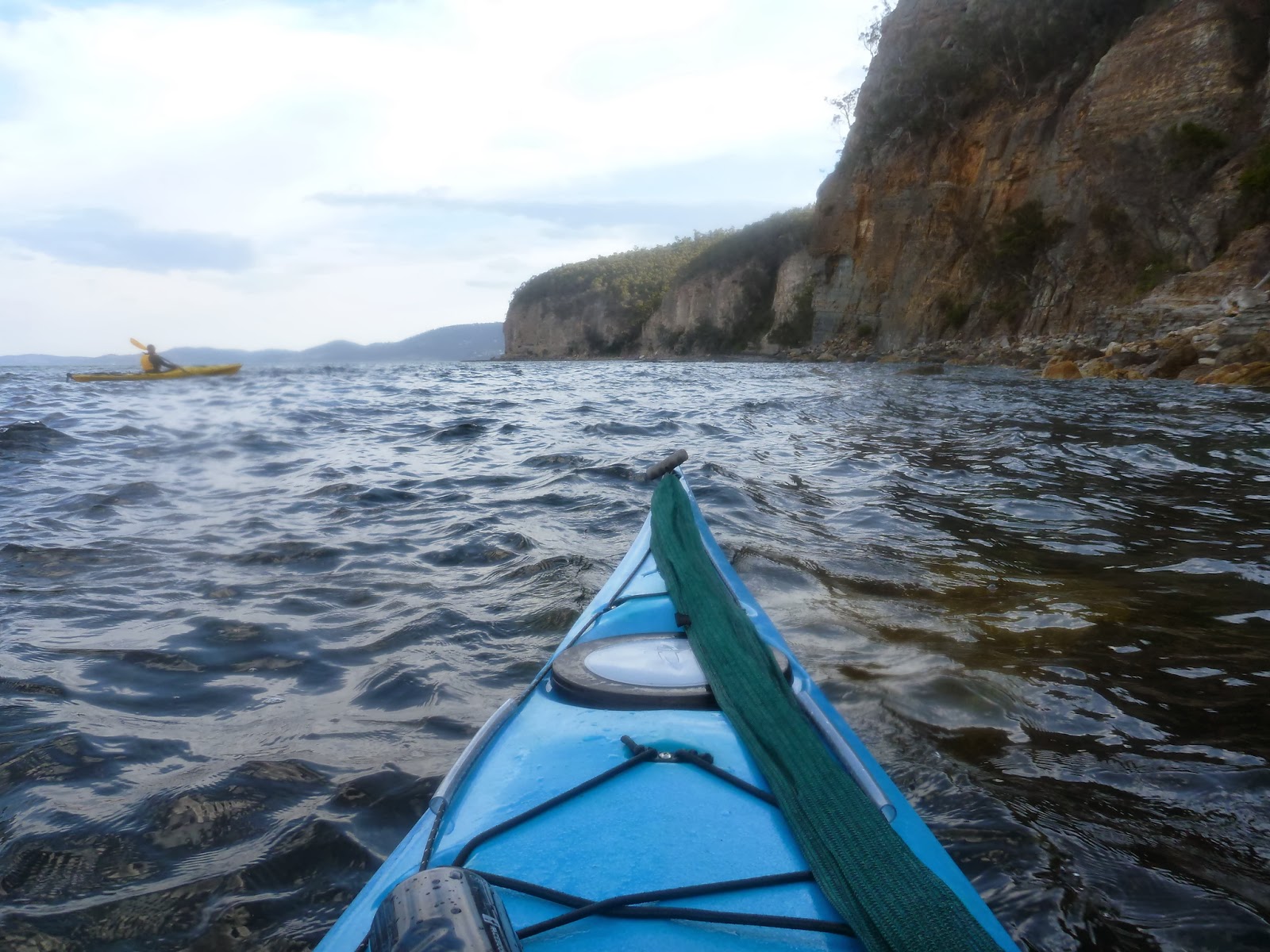 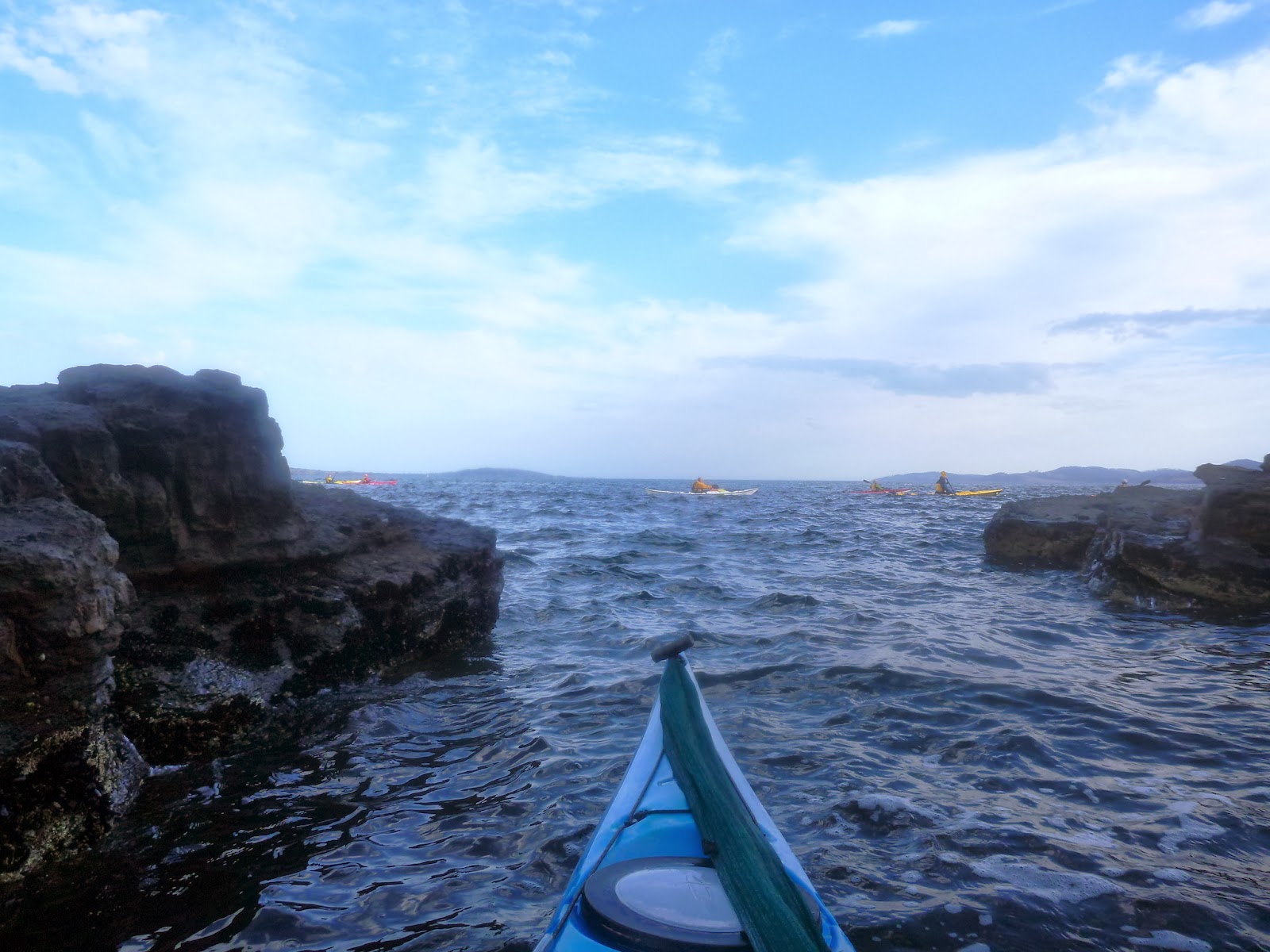 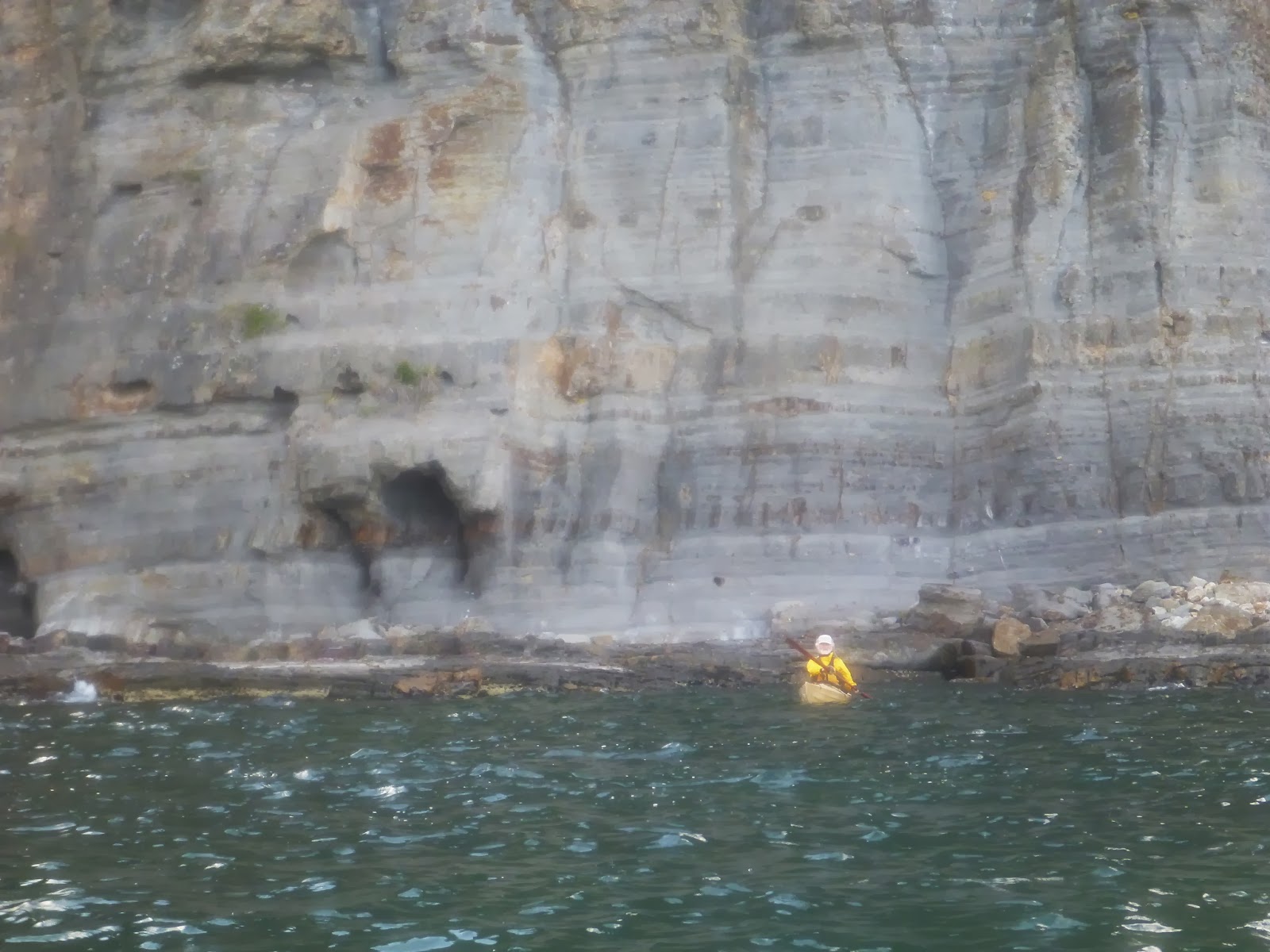 We were about a kilometre along the cliffs, and I had just finished having some fun ducking in and out behind some rocks close to shore when I did a group check and noticed Roy was quite a way off the back of the group talking on his radio.  This is pretty unusual so caught my attention , even more so when he suddenly turned around and started paddling back strongly in the direction we’d just come from, and Jim who was with him started shouting something to us that I couldn’t hear.

As a group we coordinated really well, we all stopped and turned around, and once satisfied all was happening as it should, I took off back to Jim (who was probably 50-100 metres back) to see what was happening with Roy.

When I was close enough he got the message across that a call had come out from Coast Radio that someone was in trouble in the water off Taroona Beach and all vessels in the area had been ask to respond (This in the end wasn’t quite accurate, but it was the essence of the message that I heard and acted upon).

Roy had been trying to get more information when I saw him talking on the radio, but hadn’t been able to get through and so had made the sensible decision (I believe) just to respond and head back to the beach immediately.

As the rest of the group came back together, I was madly trying to think what to do next.  I don’t quite recall the sequence of my thinking as I type this now, but I do recall thinking that I had seven paddlers with me all of whom wanted to go for a paddle along Alum Cliffs, and given Roy was already responding maybe we could?

It’s strange how our minds work – my thinking obviously showed I was still on the track of thinking compromise and keeping everyone happy, not a potential emergency response.

Somewhere in that thinking process I also realised that I couldn’t just have Roy paddling off by himself towards an unknown situation whilst the rest of us just paddled on, so even before the rest of the group had come back together, Jim had agreed to head off after Roy so at least we now had two people responding giving me a bit of a space to think what to do next.

To put this in context, to me this felt like it had all happened in under a minute.

This was also about the time that my little inner voice asked me the obvious question “What if there is someone drowning back there and you just continued paddling off on a leisurely trip because you wanted to keep people happy?“.  Which was when my head kicked into gear and realised that this was a potential emergency response situation so all nice things have to go out the window.

So (I think) I quickly explained the situation and that I wanted us all to start heading back towards Taroona Beach.  Graeme chimed in that he’d bring the group back and I set off after Roy.

That, to be honest, was the end of the excitement.

I caught up to Roy as we got to Taroona Beach and along the way it had been obvious from observing the behaviour of the many swimmers and walkers along the beach and shoreline, as well as two yachts further out to sea that no one else was responding to any disturbance, but just to be sure we decided we should continue to paddle the length of the beach and Roy continued on down past Taroona High School just in case there had been a muck up about which beach was actually “Taroona Beach”.

There was nothing and no-one to be seen, and after catching up with Roy after his foray down past Taroona High School, he had further clarified that it had been a strange message that he’d heard because it had been a ‘Sécurité, sécurité, sécurité” call (which, if like me you’ve never heard of it, generally just means a warning to all boats in the area), and was not a mayday call, but that the message he’d heard had also asked for all vessels in the area of Taroona Beach to respond and said that the police boat would be there in 30 minutes.

The spirit sort of went out of the paddle at that point, and although we did some planned towing practice off the beach and several of us learned the strengths and deficiencies in our towing systems, the group pace kept getting slower and slower and slower, and before we’d even really got back to the start of Alum Cliffs we decided to call it a night and head back to the beach.

So I’ve had twelve hours to think about what happened last night, and given that it turned out to be a non event, in particular whether I would have done anything differently than I did at the time.

I’d just be more sure of what to do than I was last night.

Yes it was a non-event and yes if I’d known more about the message and understood more about what a “Securite” call is maybe I would have reacted differently, but at the time the decision I had before me was “Someone is potentially in serious trouble, do we respond or do we not?”.

Really, that isn’t a hard question to get the right answer too, especially as the Alum Cliffs will be there to paddle pretty much for the rest of my life.

The real lesson is that education and knowledge are invaluable which brings me back to my original premise at the start of this post … I know nothing about Marine Radio, and what this little incident has taught me is that it is time to change that.

Knowledge is king, and hopefully sharing through posts like this we can all learn and think about what we’d do.

======
Just as an amusing post script, I posted the GPS for this trip on Strava (like I do for all my trips) as “Friday Night Paddle – Gone Awry” and I got this comment from Jon McComb:

“Looks like you sank a couple of times. The last time got pretty deep…“

I went back and looked at my elevation profile and sure enough it does look like I was slowly taking on water and then sank a couple of times, twenty something metres below the surface the second time …

However, what Jon missed was my amazing ability to paddle the first four and a half kilometres suspended nearly 10 metres above the water surface.