I usually take umbrage at being called a wuss.

But today it was music to my ears.

Especially as it was an official medical diagnosis from my knee specialist.

He may have used slightly different words, but I think that was a succinct summary of his diagnosis.

As I don’t tend to read my own blog much, I’m not sure if I’ve mentioned that I’ve been having a real problem with my right knee lately .  The self same right knee which started this blog several years ago when I mashed it up a bit by stepping off a 2 metre ledge whilst wandering around by myself during a Port Arthur Ghost Tour.  this little ‘mis-step’ left me with a broken knee, a nasty blood clot and an ability to inject myself with warfarin, which although not on my bucket list is a skill I’m glad to know I can do.

At the time of the injury the knee specialist was desperate to get in there and “tidy up” my knee, but with the blood clot it was too dangerous, and instead he left me with the ominous prediction that my knee will need future surgery and probably eventual replacement as lots of important bits (my description, not his) weren’t there or weren’t where they should be or were broken or something like that.  I had sort of tuned out at the bit where I’d gathered that my knee was basically cactus.  I didn’t need to know the detail.

So fast forward to about six weeks ago when I found myself limping around and getting bursts of pain if I twisted my knee the wrong way and you can understand why I was a little worried.  Like any normal male I whinged a bit to Kim (who was of course appropriately sympathetic), but basically I did my best to ignore it hoping it would come right.

However when I was still limping around after a couple of weeks I had to admit to myself that maybe I should do something about it, or maybe Kim did … these details sometimes get fuzzy with me.

Anyway, I went through the rigmarole or getting into to see my GP for a referral, getting X-Rays and an MRI and finally today … I got in to see my knee surgeon to hear the bad news.

I had reconciled myself to surgery and had already boldly predicted that I would be out for Wildside (and no that wasn’t just my latest excuse for not training) as I walked into see my doctor.  You can therefore imagine my surprise when his opening words were “I’ve got good news for you.“

I won’t go through the entire consultation, but suffice to say that whilst I may have the world’s worst luck when it comes to riding my bike or destroying expensive new toys, I am apparently one of the lucky one’s when it comes to body self repair.

Yep, my knee has not only hung in there, it’s somehow repaired itself.  Other than a bit of swelling in the bone which will continue to heal, my knee is back to being completely normal.  Apparently this is fairly rare.

And the pain I was feeling?

Apparently that’s also completely normal, and just happens sometimes when something-or-other re-seats itself through life.  Yep, apparently I was just being a big wuss and should stop limping and just work through the pain.

“Yep“, he said, “exercise is the best thing you can do for your knee right now‘.

And just like that three years of living under the heavy, heavy shadow of not being able to run was gone.

I can jump puddles … 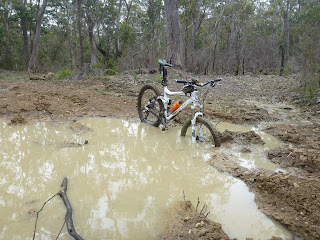 … or not … apparently I still crash into them trying and come hurtling off my bike while it stays embedded in the puddle, but that’s good enough for me.

I’m ecstatic, and I’m already boldly predicting that after Wildside, my next adventure will be a multi-sport event and it won’t be me and Kim as a team … it will be me vs Kim.

I’ve already commenced my race training …. by suggesting to Kim that she stick with her current kayak … 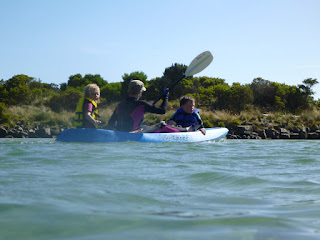 It will be my only hope of not getting my butt kicked big time.