After doing a tourist drive around the Peninsuala, we decided to go for a short ride around some of the trails at Lime Bay to test out my rebuilt wheel. 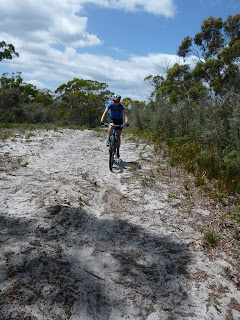 With some irony, I have to say that although my wheel held up really well, Kim’s bike developed an ominous creaking sound which neither of us could pin down, and so we ended up pulling up stumps just 8kms into the ride and heading back to our car.

What was I saying in a recent post about keeping the local bike shops in business? 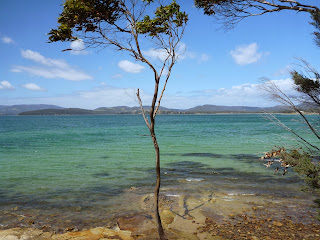 Anyway, it was still a nice ride.  I got to see some of the trails in drier conditions and I also got some useful feedback from Kim that maybe not as many people as I thought would enjoy the scratchy little section of single track just past the coal mines site.

I think her exact phrase was that “This was not what she expected.” 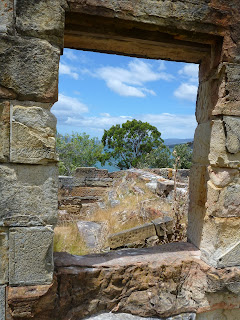 Kim’s good at giving me feedback like that.  I might even make it a New Year’s Resolution to take some more of it in.

Kim wanted to drop in and visit one of her ex-Treasury work colleagues (Gary) who owned a farm down this way for a “quick cup of tea” seeing we were in the area …  just 10-15 minutes, then we’d go get a late lunch.

Nearly two and a half hours later, after a full on farm tour where I got to take my poor little pretend 4WD places it was probably never really intended to go …

…. followed by the promised cup of tea with home made sponge cake and lamingtons made by Gary’s mum, we finally had to make our apologies and drag ourselves away to go and pick up the Monsters for New Years Eve.  I think both of us could have happily spent the rest of the afternoon just chatting away with Gary and his mum.

And that was the second ironic thing for the day.  Like all young monsters, Kim’s kids are pretty straight forward in speaking their minds, and we hadn’t even turned the engine off when we heard this shout from the neighbours backyard “Mummy …. we’re not coming with you anymore, we’re staying here tonight.“

And that was the end of our New Year Plans with the kids.

Was it too late to go back for another Lamington?