To ride, or not to ride, that was today’s question … 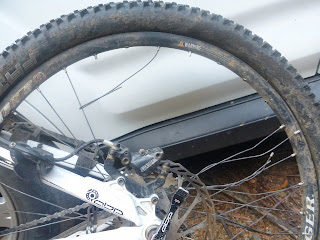 … or maybe it wasn’t so much a question as a reality.

Today’s ride was supposed to be a late afternoon ‘taster’ on our way up to the North East where we had planned on hanging out until New Years just riding trails, sitting back on beaches and generally chilling for a few days and nights

Because of this, Kim’s dubious look was probably warranted as I headed up ‘E’ road north of Bicheno and, firstly,  gaily ignored the “Road Closed due to unsafe conditions” sign about 800 metres up the road and plunged my car down into a great ditch in front of us whilst assuring her that I had got my Subaru Impreza through here a few years back and so “we should be OK“ and then again when I finally did stop (at the next major washout about 3.3kms up the road) when I tried to convince her that taking off on an unknown 30+km ride at 2pm in the afternoon was in fact a ‘taster’ ride and not an ill thought out epic late in the day when we still had over an hours driving to go before we got to our planned stop for the night.

Anyway, we eventually got ourselves together and took off on what I knew (from my previous trip up this way) would be an initial steep climb up to the old Heritage Falls Car Park at the top of Thompson Marshes.

But we got there, and in my simplistic thinking, that was ‘job done’ and it was meant to be all gentle undulations and eventually downhill back to the car from here.

The first section, along a surprisingly well maintained fire trail, was everything I expected … with lots of nice wildflowers and some interesting trail to ride, though it did take longer to get to McKays Road than I had thought it might … 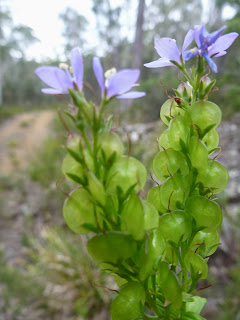 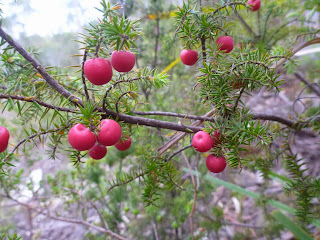 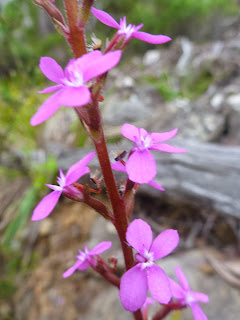 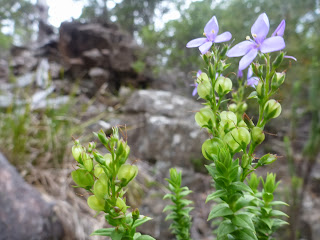 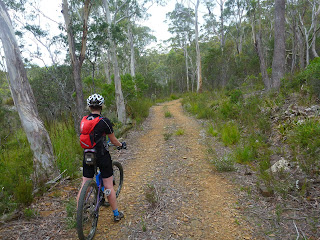 Once there, I expected McKays Road to be a fast riding gravel (forestry) road so I was a but surprised when we came out onto it and it was very overgrown (needed slashing) with obvious water ruts starting to wash away the roads surface.

I was even more surprised 1.3kms down the road when suddenly there wasn’t a road at all, but just a big pile of logs in front of me.

Somewhat confused I checked my GPS, which assured me that I was on the correct path, and it was then that my not so quick mind realised I was staring at a dismantled log culvert (bridge).

Thus followed a little adventure where firstly we stumbled on a large Tiger Snake as soon as we stepped off into the bushes (the surprising thing being that I was the one that almost stepped on the snake, but it was Kim that had a tiny stress attack and vowed that there was no way she was continuing on), then after I convinced Kim it would all be OK, I promptly kicked open a jack jumper nest, which poor Kim (who was following me) stepped onto and was thus attacked by some very angry ants. 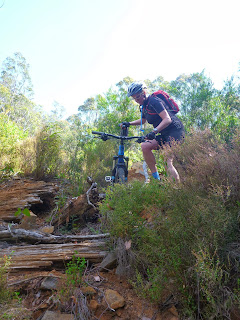 Somehow though we finally managed to work our way down into the creek, and then back up the other side where we were able to carry on as the road making gods intended.  (PS. I did notice that there appears to be a way around this section of road by turning off onto another fire trail before joining McKays Road and following that around – you can see it on any online satellite map).

The riding was pretty good on this side of the bridge, although I was just wondering out loud why there was so much grass growing up through the road … 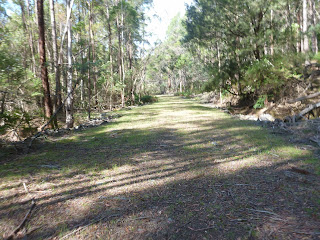 … when we came to a second washed out bridge, requiring another (though slightly easier) scramble down into the creek and back up the other side. 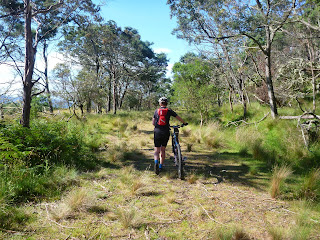 and although it was very pretty, as snakes were high up in both our minds from our recent encounter our speed was pretty slow as we scanned left and right for any unpleasant encounters of the reptilian kind.

Which is kind of ironic, as it was here, about 15kms from the car that I rode over the umpteenth million stick on this ride, only to have this one break, flick up into my back wheel and promptly rip 9 spokes out in the 2 or 3 seconds it took me to stop.

That hadn’t happened before (and is by the way why you see Kim walking in the photo above). 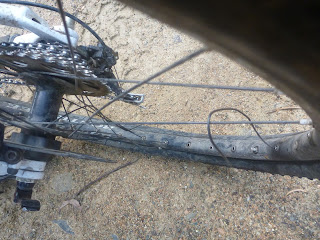 Now some things get you down (like driving two hours to a trail head and realising you forgot your helmet), and some things are just so unexpected that they’re kind of funny, and despite being a long way from my car, this one fell into the latter category.

I quickly considered my options, and realised that parking my car 3.3kms up a closed road reduced those options somewhat  (as otherwise we could have just headed out onto the main road and hitched or ridden back to the car).

Turning around wasn’t something I was interested in (especially recrossing those washed out bridges), and my attempts to convince Kim that (a) she should just continue on by herself to the car or (b) she should give me her bike and I’ll continue on to the car were both very quickly knocked back and so began a twenty something kilometre walk/unicycle back to the car.

I say ‘unicycle’ as on the downhills I locked out my front suspension and basically threw all my weight over the front tyre and coasted down the hills resting on my palms.  Just for the record, I wouldn’t recommend it as a riding style.

Because of my slow pace, I can describe the next section of road in exquisite detail, though I won’t because it’s quite boring.

We did discover why the road is so overgrown (it’s because you can now no longer get onto it with a vehicle where Dakins Road becomes McKays Road) as there is a stream in the way. 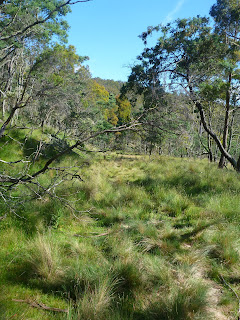 and we also discovered that there were still a lot of uphill sections between here and the car (it is pretty much undulating the whole way, but with some quite big undulations or at least so it seems when you are pushing your bike up them).

However there were also some lovely fast gravel sections, some fun technical washed out sections and lovely rainforest as well … 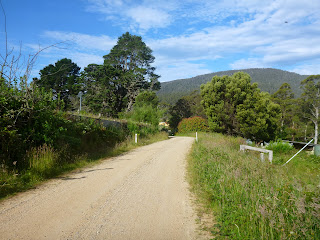 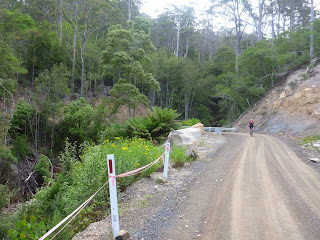 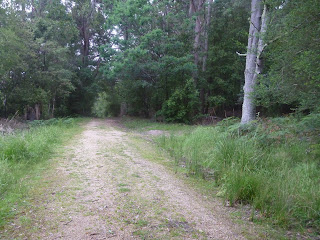 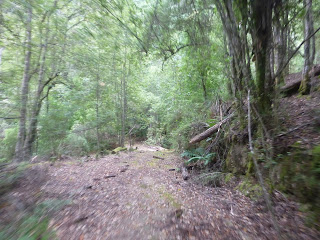 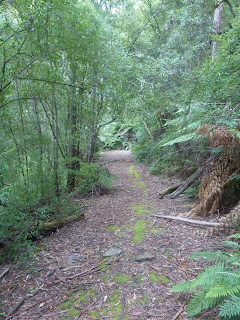 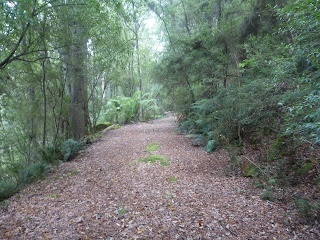 In fact if we hadn’t experienced my misadventure I would have said it would have been quite a quick ride back to the car.

With all that said, I was very, very happy to get back to the car around 6.30pm and even happier that I managed to get the car back out through that washout further down the road.

By the time we were sitting in the Pub at Bicheno eating a decent steak and sinking a beer life was in fact feeling pretty good indeed.

Yep, it may have been a premature end to our planned multi-day adventure, but if things don’t go wrong in life every now and then, well maybe it’s not the adventure you should really be having.

And I wouldn’t want that.

PS.  Here’s how you know you’ve got the most awesome girlfriend in the world …  Dinner conversation at the Bicheno Pub …

Me: “So, our options are really to head back to Hobart, or maybe Launceston, to see if I can get a new wheel.“

Kim: “You can’t get one anywhere around here?“

Me: “No, there’s no real bike shops on the East Coast, and although I might be able to find a cheap wheel, I need a strong wheel that’s going to survive my kind of riding, and that’s probably a $400 to $600 wheel from a decent bike shop.“

Kim: “Really?  I don’t know why you don’t just buy another mountain bike instead … you said you wanted a 29er … you should just get one.“

… and that’s just one more reason why she’s so awesome.